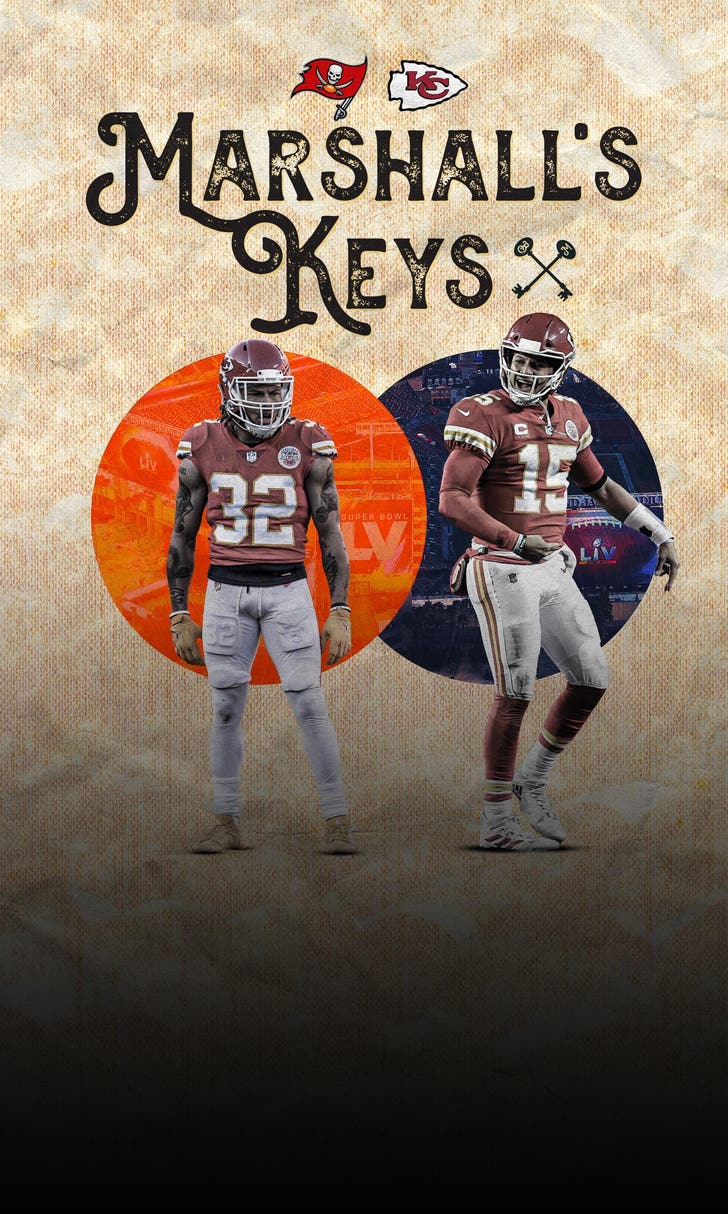 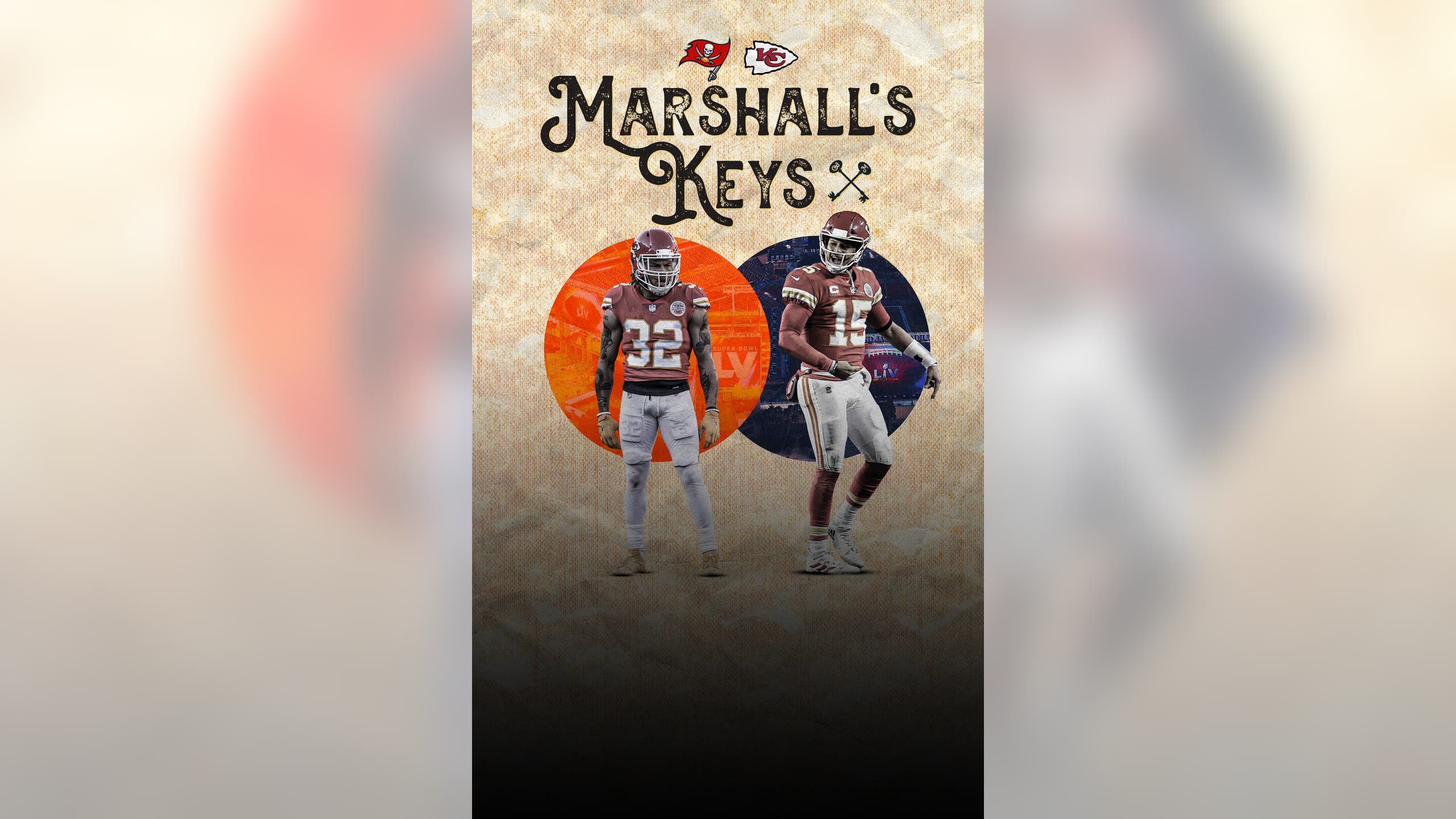 Winning the Super Bowl is tricky business. Defending that title is even trickier.

That's where the Kansas City Chiefs will find themselves Sunday, looking to become the eighth franchise in NFL history to win back-to-back Super Bowls.

How can the Chiefs, whom the oddsmakers at FOX Bet list as 3.5-point favorites, avoid the upset and join the exclusive club of back-to-back winners?

Brandon Marshall laid out his six keys ⁠— three on defense, three on offense ⁠—  for the Chiefs on "First Things First."

Brandon's take: "Jones needs to dominate his matchup against the right guard. And the reason this is important is because this will allow this defense to get pressure on Brady without blitzing."

As a defensive tackle that can get to the quarterback, Jones is a rare ⁠— and highly coveted ⁠— commodity in the NFL. He has 32 sacks and 77 quarterback hits since his breakout season in 2018 with Kansas City, all from the interior of the defensive line.

Per Pro Football Focus, the Chiefs' anchor on the D-line ratchets up his game come playoff time.

In all likelihood, Bucs right guard Aaron Stinnie will be the player most often tasked with keeping Jones at bay on Sunday. After Alex Cappa fractured his right ankle, Stinnie got his first start in the NFL last month in Tampa Bay's playoff win against the New Orleans Saints.

Jones will be expected to try to capitalize on the newcomer to get to Brady.

2. Secondary shines in the spotlight

Brandon's take: "They've been playing lights-out the last couple of weeks. [Safety Juan] Thornhill is the key to this because when you have a center fielder that can get it done, it allows the corners to play aggressive, and it allows Tyrann Mathieu to be lights-out."

The Honey Badger plays all over the field, but the safety by trade has an undeniable nose for the football. He has 10 interceptions in two regular-season campaigns with the Chiefs, along with 111 solo tackles and two sacks.

Of those interceptions, he has returned one for a touchdown. As Brady mentioned in the lead-up to Sunday, Mathieu is the kind of player who demands attention from opposing quarterbacks at all times.

Brandon's take: "The past two weeks, [defensive coordinator Steve Spagnuolo] has been blitzing like a mad man. ... But the problem here is Tom Brady [and the Buccaneers], they've got a good deep game. They can throw the ball down the field, and the offensive line allows them to do that."

In the playoffs so far, the Chiefs have blitzed Baker Mayfield 20 times and Josh Allen 18 times. Spagnuolo's game plan worked out great in both instances, particularly against the Buffalo Bills in the AFC Championship.

But it'll be tough to throw the 43-year-old Brady something he hasn't seen before. Then again, Spagnuolo has a history of success against TB12 on the big stage.

In Super Bowl XLII, "Spags" coached a New York Giants defense that got to Brady five times in a 17-14 win against the New England Patriots. As the Chiefs' DC, Spagnuolo has gotten the best of Brady twice, with a 2-0 record, four touchdowns conceded and three interceptions induced.

Brandon's take: "Don't do it. That D-line, those linebackers in Tampa, they are phenomenal. Excellent run defense, so don't even bother running. The only runs we're gonna see [are] gadget plays and [run-pass options]."

Vita Vea's reintegration to Tampa Bay's lineup could be a major factor in whether Kansas City looks to run the ball on Sunday.

The 6-foot-4, 347-pound defensive tackle rejoined the Bucs' lineup for the NFC title game after being out since Week 5, and he is a run-stuffing extraordinaire. In Tampa Bay's NFC Championship game win, the team held the Green Bay Packers to 67 rushing yards on 16 carries.

In the five games Vea has started this season, the Bucs have allowed an average of 99.4 rushing yards. His presence could make finding running lanes difficult for the likes of Leonard Fournette and Ronald Jones II.

Brandon's take: "That offensive line has its work cut out for them. You have Shaq Barrett and [Jason Pierre-Paul] looking at you."

If the running game proves to be an unfavorable option, it'll come down to Mahomes making plays.

Can the patchwork O-line get the job done and keep Mahomes upright? If so, there's a good chance we'll witness some patented Mahomes magic in the Super Bowl.

3. Trick play at the right time

Brandon's take: "Andy Reid had two weeks to prepare for this. His creativity is going to be on full display, so call the trick play at the right time. You know it's coming."

Reid is regarded as one of the scholars of the game, and his post-bye success is the stuff of legend ⁠— especially with Mahomes pulling the strings.

The Chiefs' head coach isn't afraid to go deep into the annals of football history to find a wrinkle, either. Remember last year's Super Bowl?

With two weeks off and not nearly as many media obligations leading up to the game due to the pandemic, what will Reid have up his sleeve, and when will he call it?

Check out Marshall's full breakdown below:

Do You Believe-Land?
Baker Mayfield and his wife saw a UFO on Wednesday night in Central Texas. And Colin Cowherd wants to talk about it.
4 hours ago