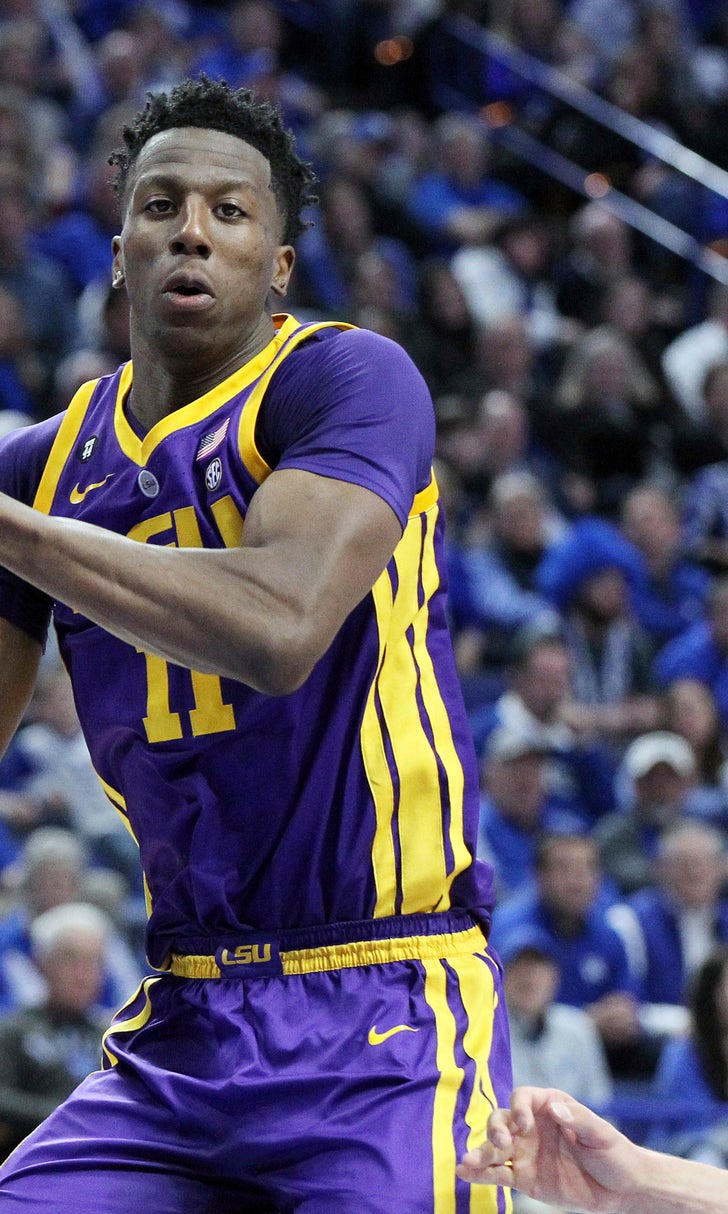 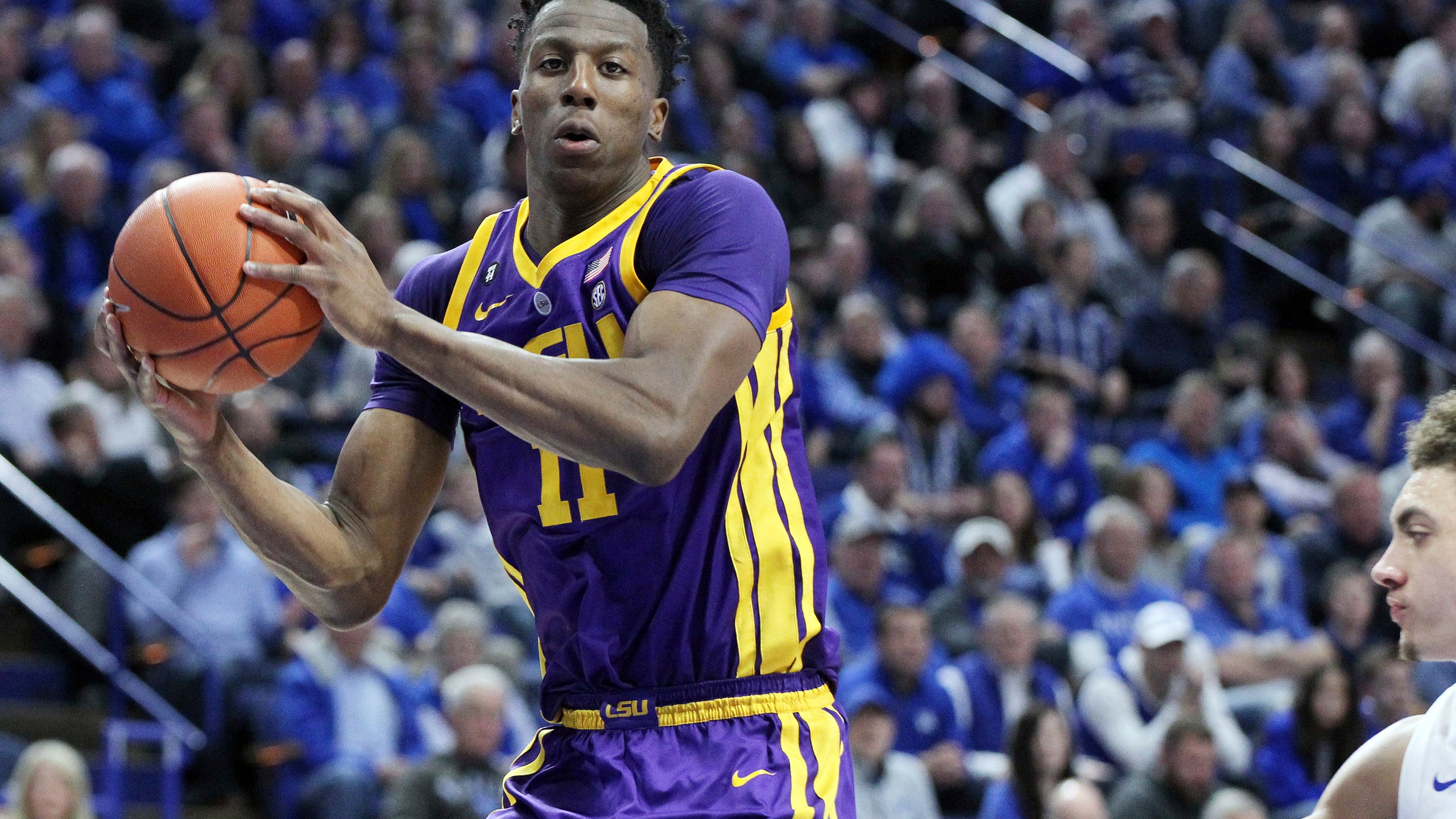 LOUISVILLE, Ky. (AP) — Cam Reddish made a tying 3-pointer with 1:28 left and the go-ahead free throws with 14 seconds remaining, helping No. 2 Duke overcome a 23-point second-half deficit to beat No. 16 Louisville 71-69 on Tuesday night.

After making 2 of 17 shots to open the second half, the Blue Devils (22-2, 10-1 Atlantic Coast Conference) got hot and shut down the Cardinals over the final 9:54. Zion Williamson (27 points, 12 rebounds) ignored foul trouble and instead drew whistles in his favor, making 8 of 9 from the line before Reddish added a couple of 3s in between free throws — the last two of which followed an official review of a play under Duke's basket.

Christen Cunningham tried to tie it for Louisville (17-8, 8-4), but his jumper in the lane bounced off the rim and into Williamson's hands as the final seconds ticked off. The Blue Devils celebrated as they left the court after completing the second-biggest second-half comeback in program history.

LEXINGTON, Ky. (AP) — Kavell Bigby-Williams's tip-in at the buzzer lifted LSU to a win over Kentucky.

With the game tied after Keldon Johnson made two free throws with 6 seconds left, Skylar Mays drove the length of the court. His shot missed but Bigby-Williams got the offensive rebound and scored to give the Tigers their first win over the Wildcats since 2009. It was just the sixth time ever that LSU (20-4, 10-1 Southeastern Conference) has beaten Kentucky (20-4, 10-2).

Tremont Waters, who finished with 15 points to lead the Tigers, hit two free throws with 20 seconds left to give LSU a two-point lead before Johnson's free throws tied it.

Naz Reid and Emmitt Williams scored 12 each and Mays had 11 for the Tigers.

STATE COLLEGE, Pa. (AP) — Lamar Stevens scored 15 of his 26 points in the first half and grabbed 12 rebounds to lead Penn State to an upset of Michigan.

Penn State pulled away in the first half as its star heated up and Michigan played the second without its coach.

Michigan coach John Beilein received back-to-back technical fouls and was ejected for arguing with officials as the teams entered the locker rooms after the first half.

The usually mild-mannered Beilein appeared to be upset after Penn State guard Jamari Wheeler barreled over Zavier Simpson to free up Rasir Bolton's buzzer-beating layup. Beilein needed to be calmed down by assistants DeAndre Haynes and Saddi Washington as he approached the scorer's table to argue, then again after he was assessed another violation as he was walking away.

Howard went 12 for 21 from the field and 8 for 10 at the free-throw line in another impressive performance. He has scored at least 30 points in four of his last five games.

It was mostly smooth sailing for the Golden Eagles all night long. Hauser went to the locker room after he was poked in his right eye with 6:51 left, but he returned to the bench to watch the final minute with his jubilant teammates.

At times, the game seemed like a contest between the two heavyweights as Winston seemed to answer every Happ hook shot with a floater or 3-pointer.

But Wisconsin (17-7, 9-4) staggered at home, going more than five minutes without a point as the Spartans put the game away.

COLLEGE PARK, Md. (AP) — Jalen Smith scored 14 of his 16 points in the second half, and Maryland used a strong defensive performance to beat Purdue, ending the Boilermakers' eight-game winning streak.

Down by eight at halftime, the Terrapins (19-6, 10-4 Big Ten) took the lead for the first time with 10 minutes left before pulling away. The comeback was fueled by Smith, Eric Alaya and fellow freshman Aaron Wiggins.

Maryland outscored Purdue 40-18 in the second half, limiting the Boilermakers to 1-for-16 shooting from beyond the arc.

Ayala scored 15, Anthony Cowan Jr. added 12 and Fernando Bruno had 12 points and 12 rebounds, his seventh straight double-double and 16th of the season. Wiggins scored 11 on 4-of-6 shooting.

Carsen Edwards scored 24 for Purdue (17-7, 10-3), but was limited to seven points after halftime on 2-for-13 shooting. The Boilermakers went 6 for 36 from the floor in the second half.

Three other Wildcats scored in double figures, Dean Wade with 12 points, and Kamau Stokes and Makol Mawien with 11 apiece.

AKRON, Ohio (AP) — CJ Massinburg scored 21 points, Dontay Caruthers added 15 and Buffalo turned up its defensive intensity in the second half and held on to beat Akron, dropping the Zips to 0-31 against ranked teams.

The Bulls (21-3, 9-2 Mid-American Conference) were held to one of the lowest point totals this season, but the defending conference champions were able to do enough against the Zips (14-10, 6-5), ranked 13th nationally in scoring defense.

Caruthers came off the bench and gave the Bulls some solid minutes at both ends, drawing a charging foul during a key second-half stretch for Buffalo, which forced two 30-second clock violations after halftime.

Loren Cristian Jackson scored 20 and Tyler Cheese 16 for the Zips, who kept fighting and closed within 73-70 on Daniel Utomi's 3-pointer with 16.3 seconds left.