The Cleveland Browns quarterback situation from 1999-2014 is best summarized by the infamous jersey that began as a regular Tim Couch uniform and devolved into a sorry scroll listing every quarterback to start a game for the Browns over that span.

We’re taking it a step further with the Cleveland Browns QB Misery Matrix, which illustrates just how much suffering fans have endured at the Factory of Sadness (FirstEnergy Stadium). Skip down for the diagram but continue reading for context.

Couch, selected first overall in the NFL Draft in 1999 when the franchise was re-established in Cleveland after former owner Art Modell moved the team to Baltimore in 1995, is probably the greatest hope the Browns have had for a franchise quarterback over the 1999-2014 span (based on his draft position and hype, not necessarily his ability). Couch crashed and burned during an injury- and inconsistency-riddled five seasons and became the backdrop for now 16 seasons of mostly poor quarterbacking, speckled with a few glimmers of promise.

(Check back on Thursday for the Redskins’ quarterback misery matrix!)

So, what comes first? Bad quarterback play or bad ownership/management that fails to develop players and surround him with the necessary supporting cast to succeed? We won’t address that question here but it’s something to consider as you review the matrix that plots (1) the quarterback rating for the player who started the most games for the team each season (on the Y axis) and (2) the number of games the team won each season (on the X axis).

On the X axis, the baseline colored blue represents the average of the games won by the most winning (13.265 games) and most losing team (1.875) in the league each season from 1999-2014. That number is 7.75. We felt this would give you a better idea of how the team fared against common team records instead of 0 through 16.

On the Y axis, the baseline colored blue represents the average of the quarterback rating by the top-rated and bottom-rated QB in the league (among qualified passers with at least 224 attempts). Across 1999-2014, the high mark average tallied 109.4 while the bottom registered at 60.2. The average of those is 84.8. Typically, the league’s top 10 QBs clock in at about 90 or better.

We’ve also added one data point from the Browns’ three divisional rivals, one for each of their current "franchise" quarterbacks. Ben Roethlisberger and Joe Flacco certainly are that for the Steelers and Ravens, respectively, while the jury is still out on Andy Dalton for the Bengals (who also had a nice run with Carson Palmer). The two-time Pro Bowler Dalton has, at least, given the stability of starting 16 games for four consecutive seasons and counting. Big Ben’s 2005 season was plotted (he’s had better statistical seasons), which ended with a Super Bowl victory. Likewise for Flacco in 2012. Dalton’s top numeric year in 2013 is marked.

We’re not sure if this will be therapeutic or torturous for Browns fans, like having one’s worst nightmare dissected. But at the dawn of a new season and a new nameplate to add to the infamous jersey, for 36-year-old journeyman Josh McCown, it felt like time to put it all in perspective. Some additional notes follow. 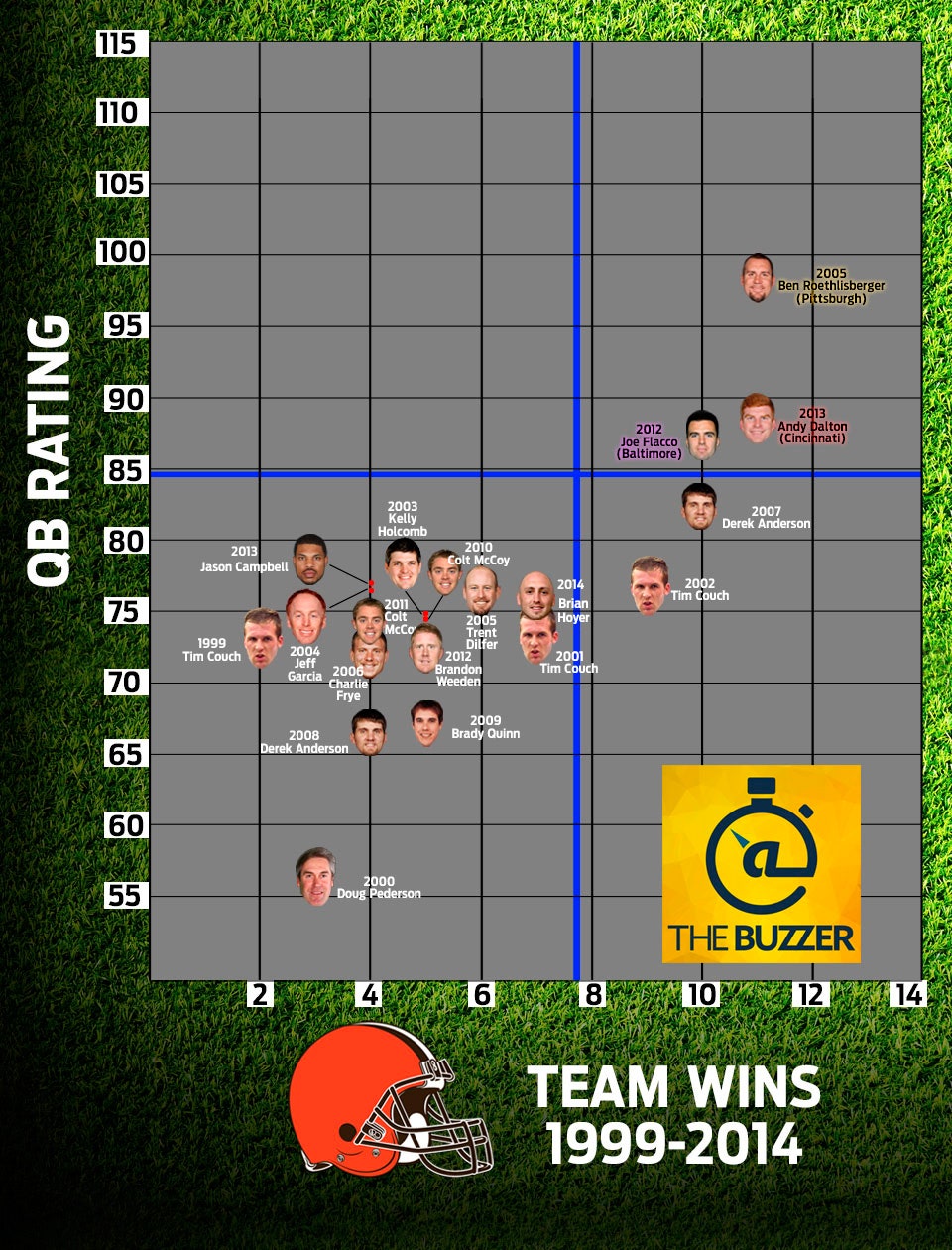 ● The average rating among the plotted leading starters for the Browns is 73.2. That does not factor in lowlights like Luke McCown’s 52.6 over four starts in 2004 and Ken Dorsey’s 26.4 over three starts in 2008.

● The Browns did reach the playoffs in 2002-2003. Kelly Holcomb, Cleveland’s 2003 QB du jour, started that game against the Steelers — a heartbreaking 36-33 loss in which the Tommy Maddox-led yellow and black roared back with 22 points in a fourth-quarter comeback.