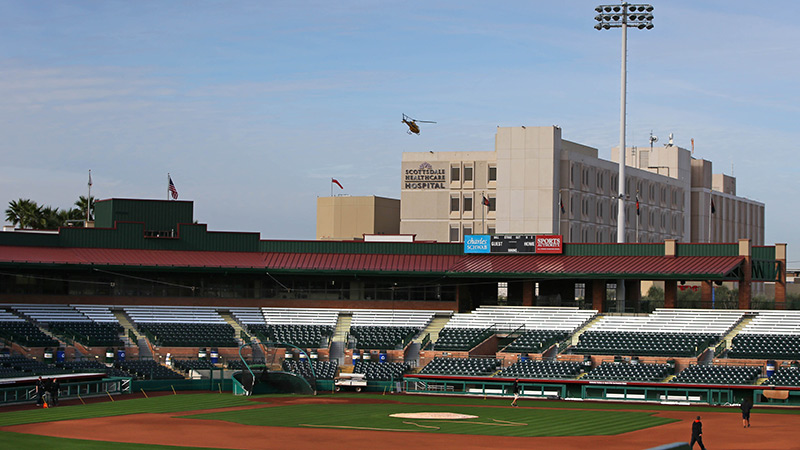 Feature: Have a free morning during spring training? Come to the stadium because when the team is scheduled to play a road game, the gates are open and fans can see their favorite players up close as they prepare to head off to their game.

Autographs: Go to the area surrounding the Giants dugout before or after the game.

Signature food: Garlic fries at Giants games are known baseball wide, but not everyone can travel all the way to the Bay Area for this ballpark delicacy. Good news is the legendary fries are available during Giants games at Scottsdale Stadium.

Most expensive seat/cheapest seat: Prices are dynamic, so a lawn seat against a lower market team will be decently cheap, hovering around $10, according to the Giants ticketing website. But if you want Dodgers-Giants seats, the tickets, even lawn seats, will cost you a bit more.

Pregame and postgame hotspot: The RnR Restaurant and Bar is just around the block from the ballpark. The restaurant is not shy about showing it bleeds orange and black as Giants flags fly outside the establishment. Thousands of Giants fans flock to this restaurant every spring.

Nearby attraction: Keep walking from the RnR Restaurant and you will stroll right into the past at Old Town Scottsdale. The area features multiple restaurants and other shops selling knick-knacks and postcards.

Feels like home: What makes you feel more at home than constantly being reminded that you have won a World Series title three of the last six years. Plastered all over the ballpark are the championship logos celebrating the Giants dynasty.