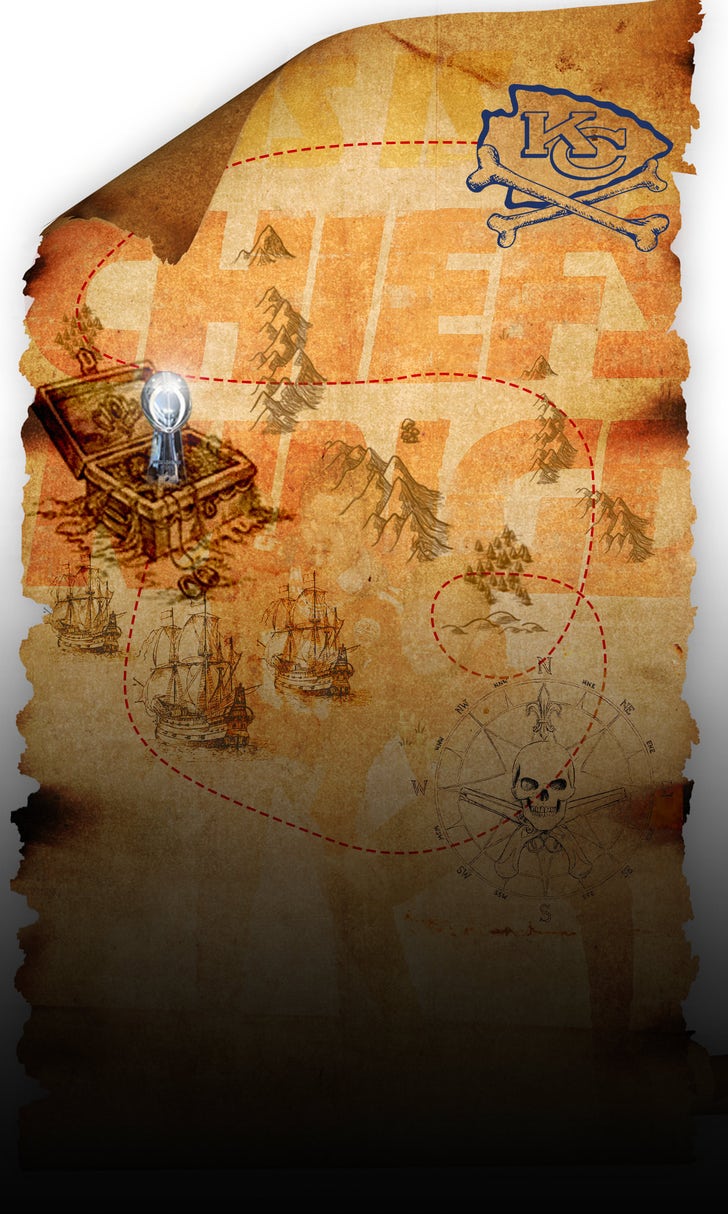 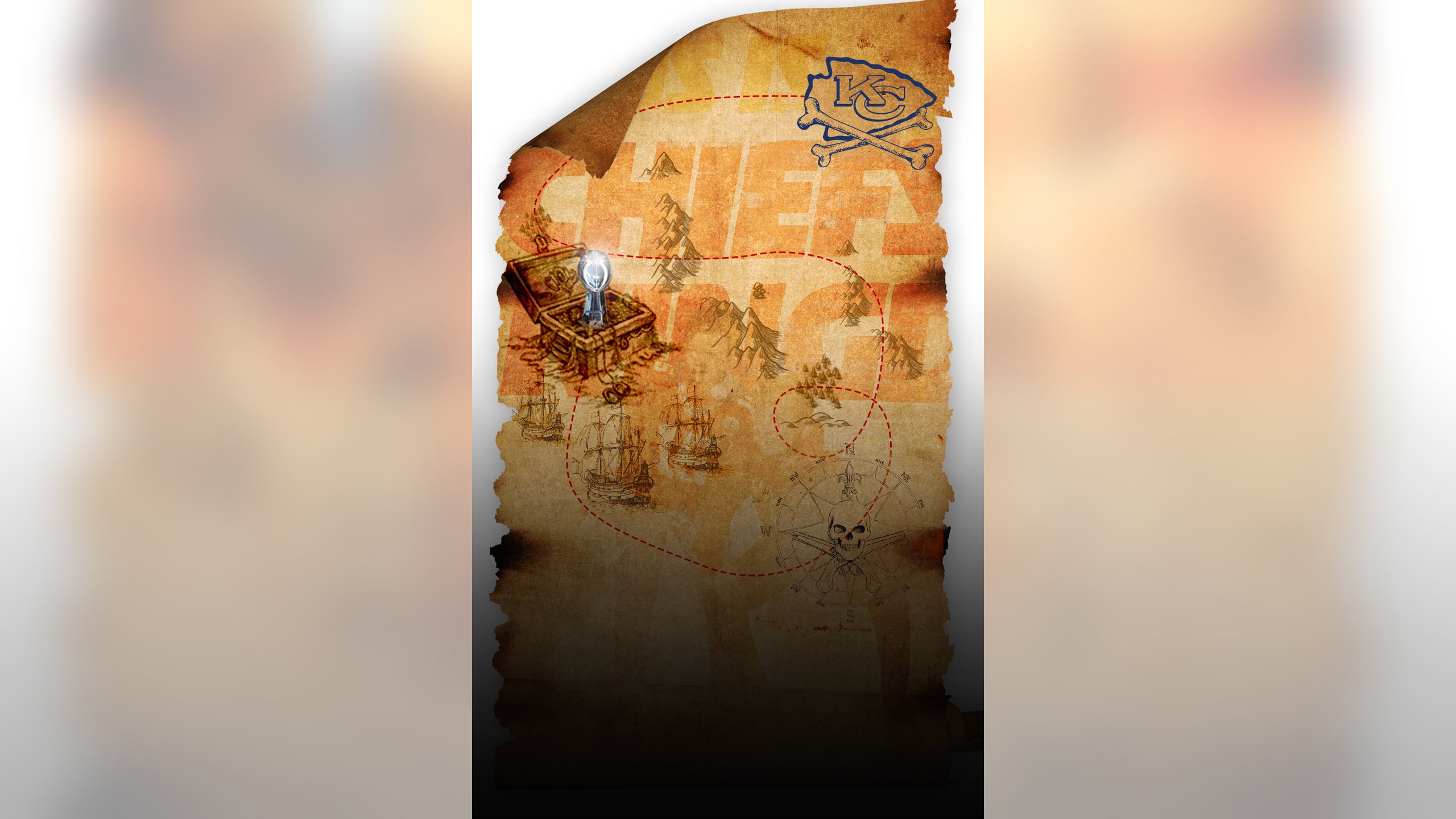 previous story
Health is on Tampa Bay's side vs. the Kansas City Chiefs
next story
Edge of Glory
National Football League

TAMPA, Fla. — Andy Reid clutches his laminated play card and squints into the sunshine from behind his trademark glasses and fogged-up face shield.

"I promised myself I would never miss another Chiefs Super Bowl," he says, standing on the beach like a red-shirted Andy Dufresne from "The Shawshank Redemption."

A few beachgoers walk over to take some photos of him. He poses, holding up his play card and curling his mustache into a small smile. Over the Gulf of Mexico, the sun starts to dip below the turquoise horizon. 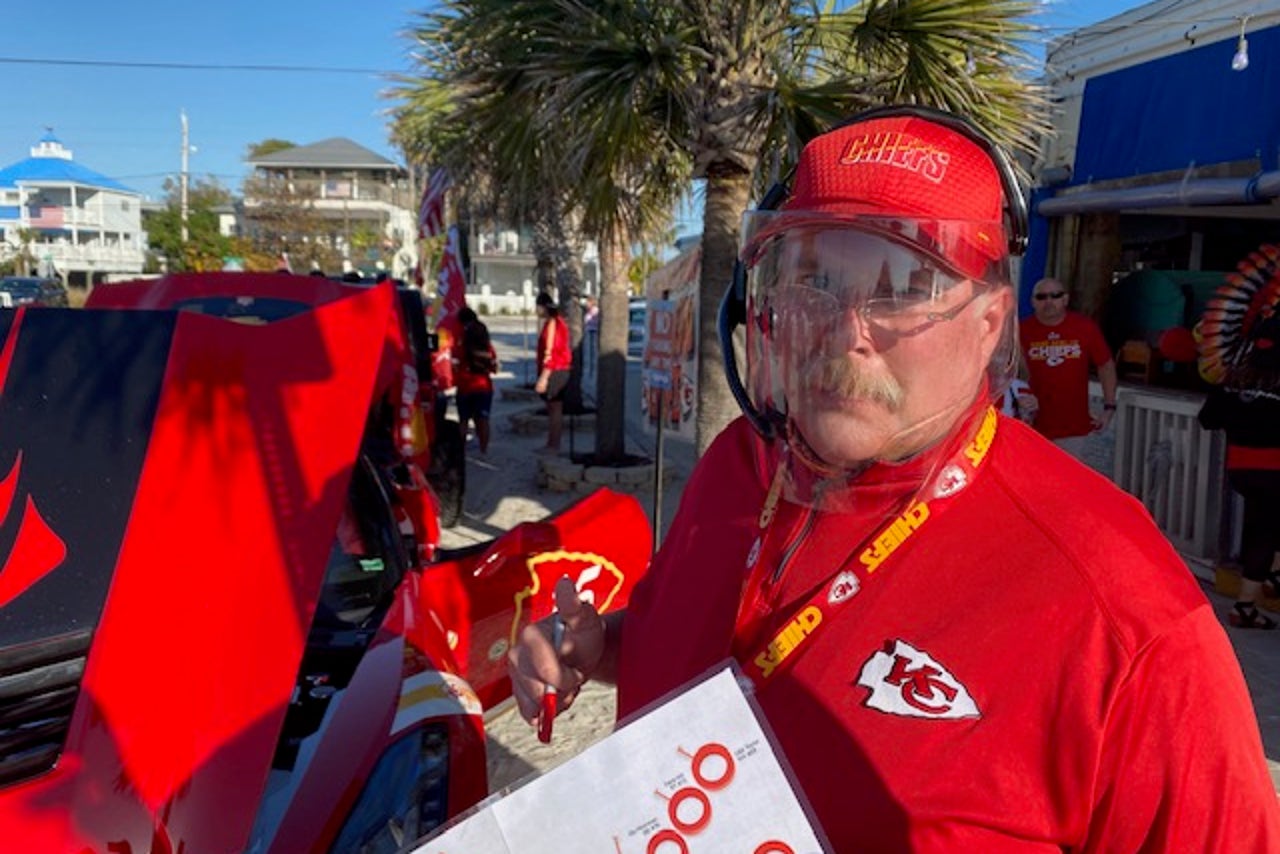 Chiefs fan Matt Black is an Andy Reid doppelganger and a devoted supporter of the defending Super Bowl champions.

It’s Matt Black, a Chiefs fan (and professional opera singer) from Kansas City. He flew down to Tampa to "paint the town red" before watching the real Andy Reid try to lead the Chiefs to their second straight NFL championship. How he'll watch remains to be determined — Black is still hoping to score tickets to Sunday’s game.

There aren’t many bars in this part of Florida where "Almost Andy" can be surrounded by like-minded Chiefs die-hards on Super Bowl weekend, but Caddy’s Treasure Island is one of them. Friday afternoon brought Missourians to this beachfront spot in their Patrick Mahomes jerseys, their jean shorts, their bikinis and, yes, their red-collared shirts with lanyards.

"We just got off the plane," says Michael Dean, from Springfield, Missouri, wearing a red mask. "So we’re still sober."

There’s a guy selling Chiefs gear by the parking lot. There’s a red Jeep painted with the "Run It Back" motto in front of the entrance. This place is about 40 minutes from Raymond James Stadium — and about a world away from home.

When asked the last time she wore shorts, she answers, "September."

This whole party is thanks to a man named Doug Morris, a 62-year-old Chiefs fan who moved to Florida in 2010 to work for the military. At the beginning, all he wanted was to find some other Kansas City fans to watch games with. "I knew two other people," Morris says. "I said, ‘There have to be more than three of us down here.'"

He named his tiny group "Arrowhead South." The fledgling crew would drive into downtown on Sundays to cheer the Chiefs in a mall bar. "The TV was way across the room," he recalls. "No sound. Bucs fans all around. But it survived." 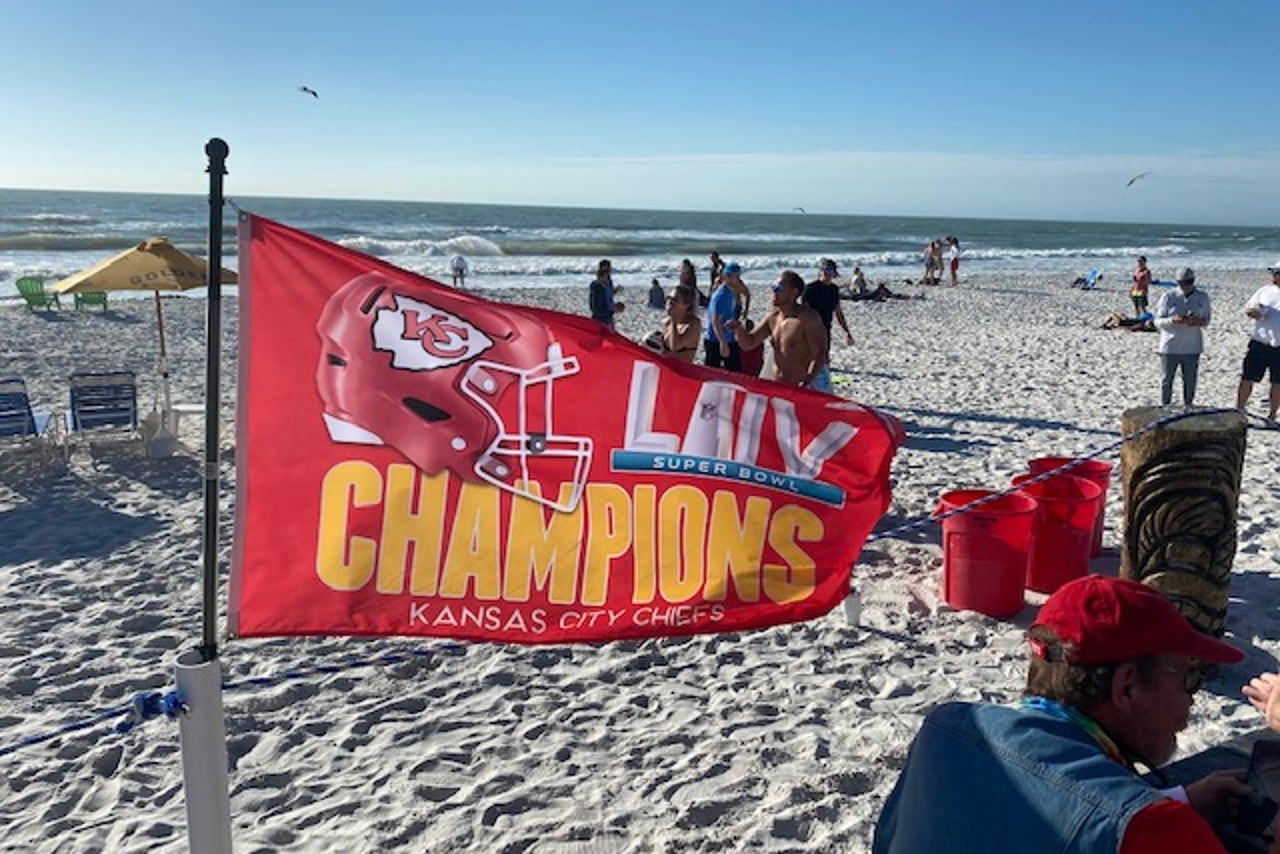 Even in Buccaneers territory, the Chiefs faithful are making their presence felt in advance of Super Bowl LV.

Very slowly, word got around. Social media helped. The Chiefs’ success helped even more. Eventually, Arrowhead South grew to 25 or 30 people. Morris watched his bare-bones site tick up on the Google results list. Before long, that little mall bar became too small to handle the multiplying horde of Kansas City backers who gathered there on NFL Sundays.

Morris split the group into four branches around the area, with Arrowhead South hubs located in Brandon to the east and Sarasota to the south. Then Facebook messages started rolling in from fans wanting to establish branches as far away as West Palm Beach and Miami.

The group grew to 13 Florida chapters and 5,000 members on Facebook. It probably would have 10 times that many if Morris made the group public. He still vets new members, wanting to make sure everyone is joining for the right reasons. "You have to be nice to each other," he insists.

Recently, he has been getting calls from as far away as Mississippi and Milwaukee. Morris is mulling the possibilities, but he admits that a Wisconsin chapter would probably have to be called "Arrowhead North." He doesn’t make money from his efforts. He just wants to make sure Chiefs fans can find one another.

"I’d say 75% of chapter leaders are female," Morris says. "They feel safe. They like football, too. They just don’t want to get hit on and all that."

This week is the culmination of a decade of Florida-based fandom for Morris. On Sunday, the Arrowhead South brigade expects such a large turnout that the group rented out Al Lang Stadium in St. Petersburg. Hundreds — maybe thousands — of Chiefs fans will pay $150 each to watch Super Bowl LV in the 7,500-seat venue, with Morris planning to use the proceeds to cover expenses and donate any leftover profit to a college scholarship program. And, yes, there will be Kansas City barbecue. 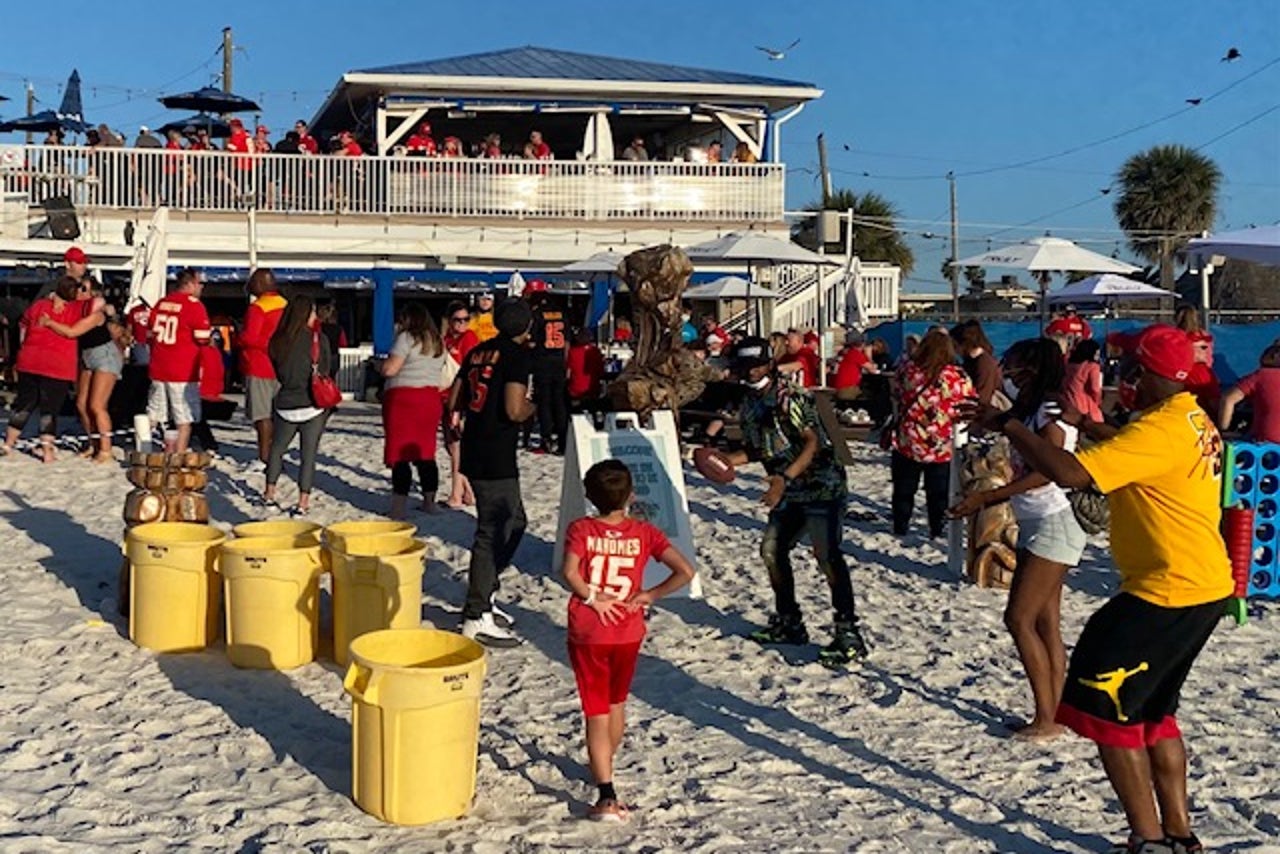 The Arrowhead South brigade is out in full force this week.

Morris has even been in touch with the CDC to make sure the outdoor party will be safe — with masks and hand sanitizer and social distancing. "We don’t want to be the super-spreader," he says. "We’re not doing that."

It feels appropriate that the Chiefs have finally come to a Super Bowl in Morris’s adopted hometown, with the Buccaneers here waiting for them. He’s truly in the lion’s den, the leader of a small but feisty rival group amid a sea of pewter.

"This is all Tom Brady!" he jabs. "And they’re bandwagon fans!"

Rachel Dean, Michael’s wife, believes the narrative is twisted and that it's the Bucs fans who'll feel as if they're on enemy turf. "This is Chiefs Kingdom!" she says, sounding ready to annex half the state of Florida. "This is Arrowhead South."

Most Chiefs fans have endured the franchise's long, bleak downswings, so the Mahomes-Reid era has felt like sunshine after the rain (or sleet). Rogers remembers wearing a bandage on the bridge of her nose in elementary school — a tribute to former defensive lineman Neil Smith. She and her husband, Curtis, don’t have any idea where they’ll watch the game. They don’t much care. They just wanted to be here.

"It’s incredible. You never know what’s going to happen on each play," says Greg Sturgeon, 55, who booked his tickets to Tampa before last month's AFC title game. "We went through the Marty Schottenheimer days. We loved those days. But this is different."

So it’s not such a bad thing that tickets for the game are damn near impossible to get, with the NFL allowing only 25,000 people into Raymond James on Sunday (including 7,500 frontline health care workers). Most of the Chiefs fans here at Caddy’s will go to Al Lang or maybe Glory Days Grill, a chain of area restaurants getting beaucoup calls from Chiefs fans this week. 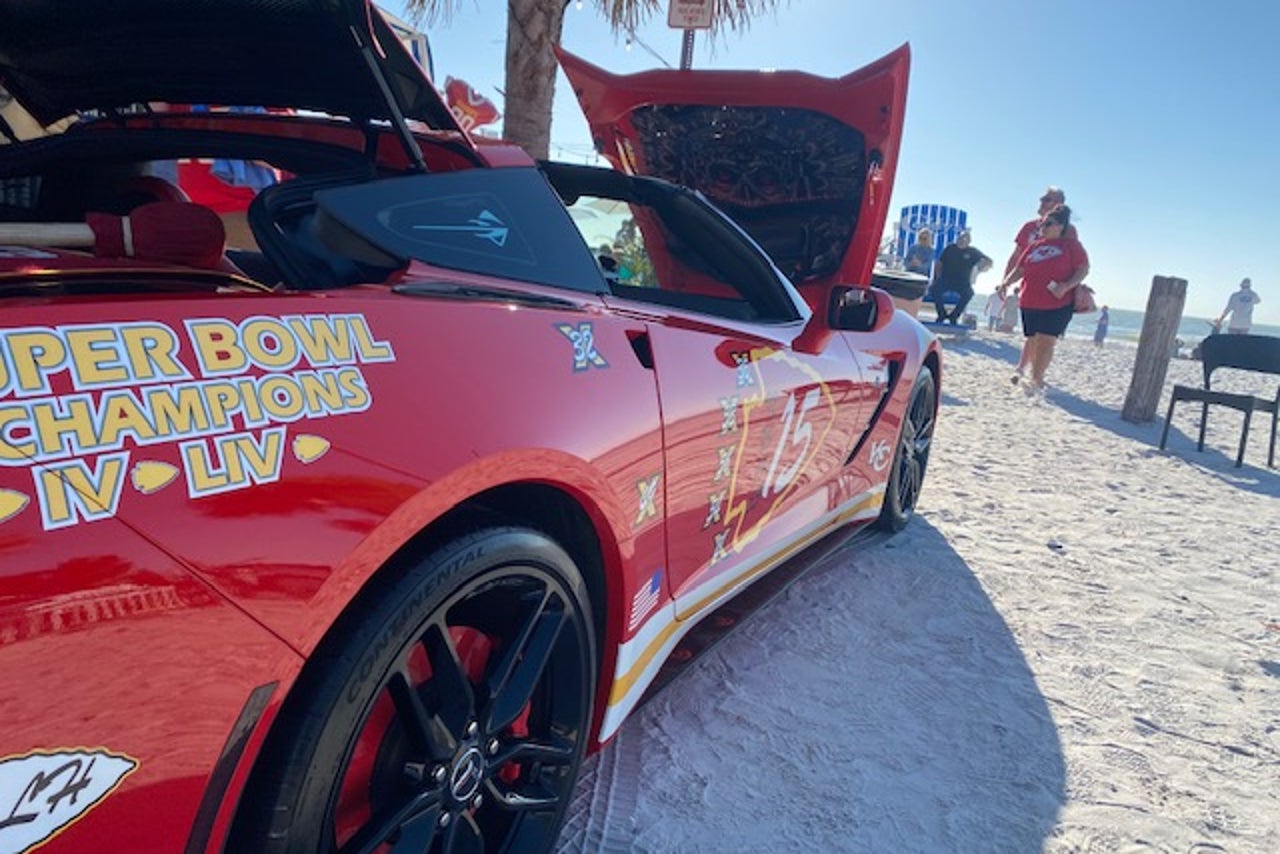 K.C. fans hope to "Run It Back" and add another title to that paint job this weekend.

"They’ve been making reservations in pods of two to four," says Jen Ulmer, Glory Days' VP of marketing. "But I assume a lot of them know each other."

Of course, there are still plenty of dreamers who plan to try to attend the game in person — including "Almost Andy" Reid.

"Andy might be holding a sign out there by the stadium," he says, referring to his lookalike persona. "Will coach for tickets!"

Do You Believe-Land?
Baker Mayfield and his wife saw a UFO on Wednesday night in Central Texas. And Colin Cowherd wants to talk about it.
3 hours ago

Empire State Exit
Reports are that Sam Darnold could be on his way out of New York, which means BYU's Zach Wilson could be on his way in.
1 day ago
those were the latest stories
Want to see more?
View All Stories
Fox Sports™ and © 2021 Fox Media LLC and Fox Sports Interactive Media, LLC. All rights reserved. Use of this website (including any and all parts and components) constitutes your acceptance of these Terms of Use and Updated Privacy Policy. Advertising Choices. Do Not Sell my Personal Info