‘Baseball is Dying’: A 100-year history of doomsday proclamations 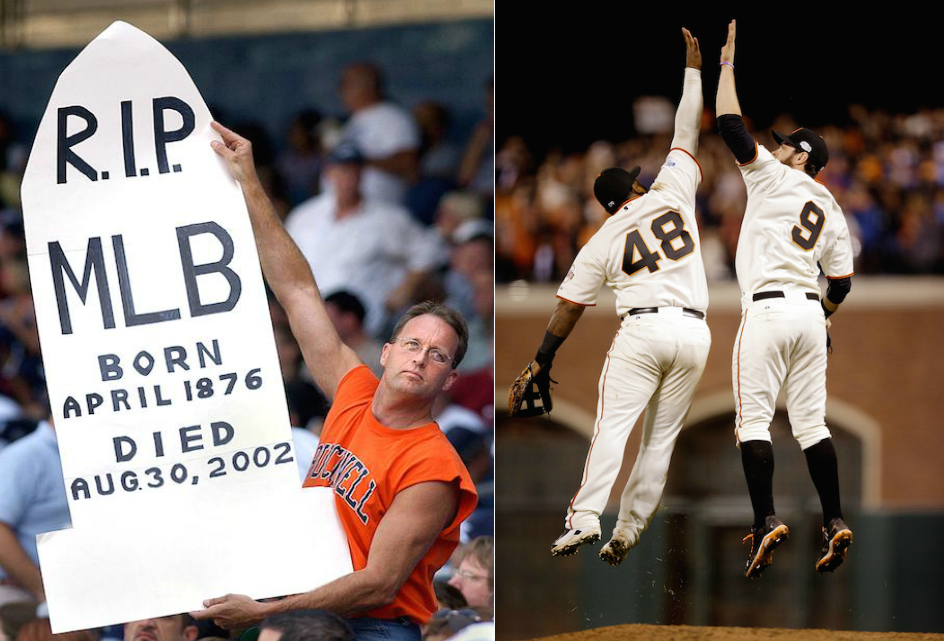 Declaring that baseball is dying is as much an American pastime as the game of baseball itself. Baseball has indeed survived and today its popularity, revenue growth and other evidence indicates that the sport is alive and well.

The sportswriting obsession with forecasting the demise of baseball spawned a sub-pastime: fact and theory-based defenses concerning baseball’s health. Cynics and critics have persistently forecasted the end of baseball for at least 100 years — literally — and for just as long, other sportswriters have refuted the claims.

Come take a look at the various eulogies for baseball and some rebuttals, starting with a World War I-era announcement.

Money shot: "The quality of baseball during most of the two hours and forty-five minutes which the players spent on the field was so poor that the few civilians present conceived the idea that the members of Company G, Seventy-first Regiment, who occupied choice seats in the grandstand, were there in case it should be considered necessary to call out the National Guard in order to put down a rebellion." 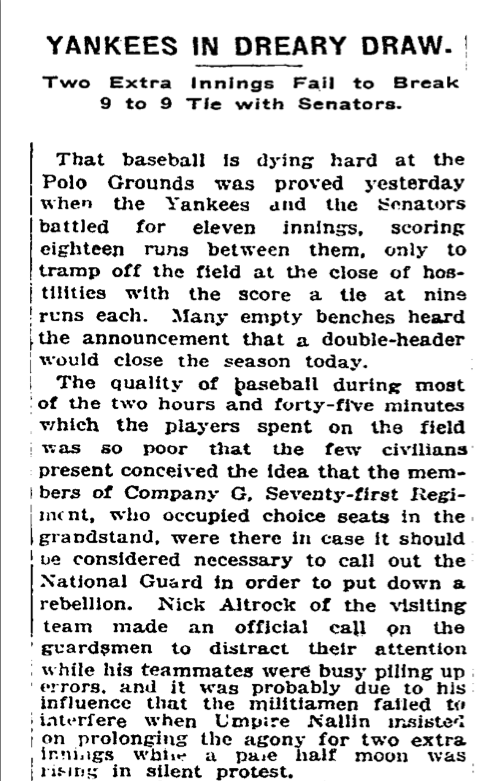 Money shot: The headline says it all. 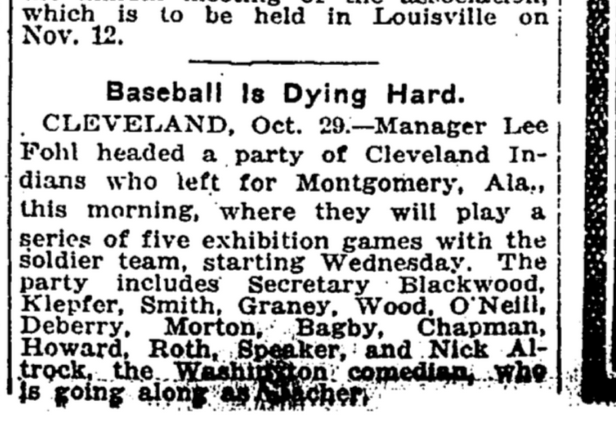 Shot of life: “The sad and somber sigh some time back that baseball was dying seems to have faded out."

Level of death: Not dying!

Shot of life: “At St. Louis the largest crowd of the season, 22,500, turned out to see the Cardinals lick the Cubs.”

Level of death: Definitely not dying.

Money shot: “Baseball, we fear, is going the way of the horse and mustache cup.” 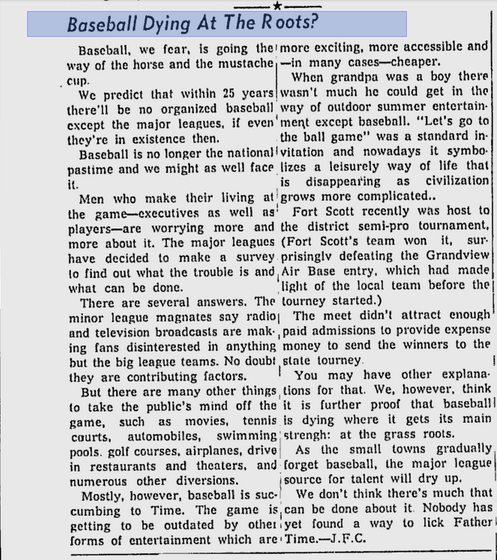 Shot of life: “National League attendance has more than doubled in 20 years.” 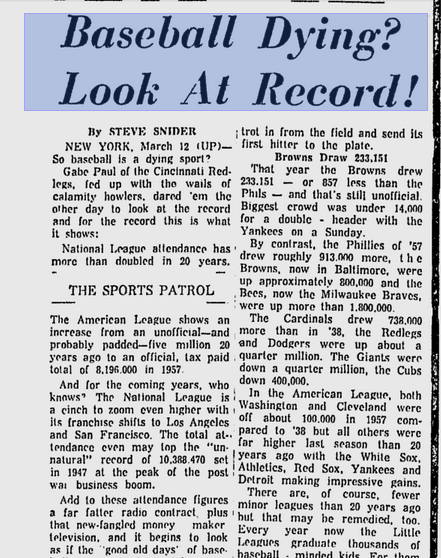 Money shot: “In some circles there is a sharp suspicion that baseball may be riding a good horse to death, carrying a good thing too far. They fear the public may become sated with the home run just as it would become indifferent to football that offered nothing but one long touchdown pass after another and no running.”

Money shot: “No one gives a damn about baseball anymore.” 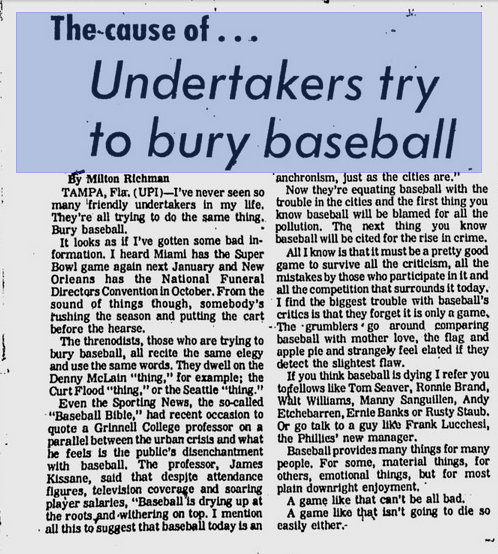 Money shot: Headline speaks for itself. 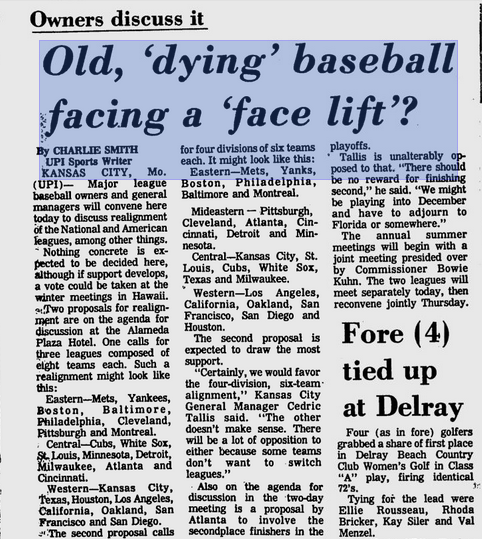 Level of death: On the surgical table.

Shot of life: “People are always talking about speeding the game up, but I’m not sure anybody really wants it speeded up,” said former Giants manager Joe Altobelli. “People go to games for socializing, for having a good time, and they don’t particularly want to drive to the park for a game that’s just going to last an hour and a half.” 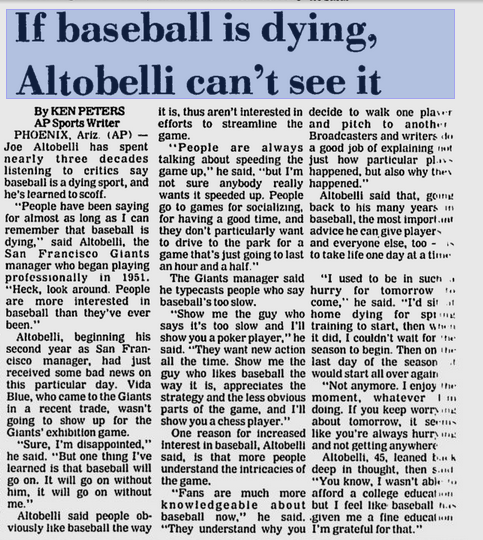 Money shot: “High school baseball may soon disappear from the scene like a ghost in a rigged seance, quickly and in a cloud of smoke.” 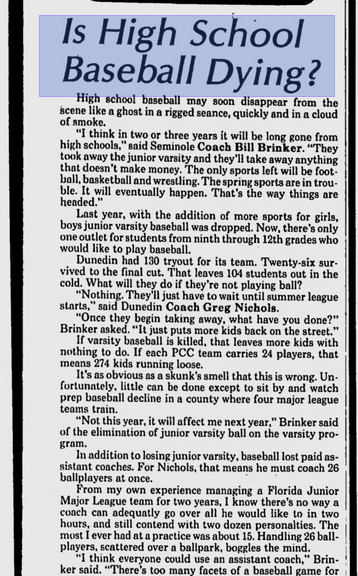 Money shot: This imagined conversation: “Hey, Dad” the young boy shouted, holding up a strange brown slab What’s this?” … “That’s a baseball glove,” the father said softly, slipping the mitt over his left hand for the first time since it had become a worthless relic.”

Shot of life: “On all these occasions, the owners talked of baseball’s death, the public whined, the sports writers repeated their analysis, and the editorial writers pontificated.” 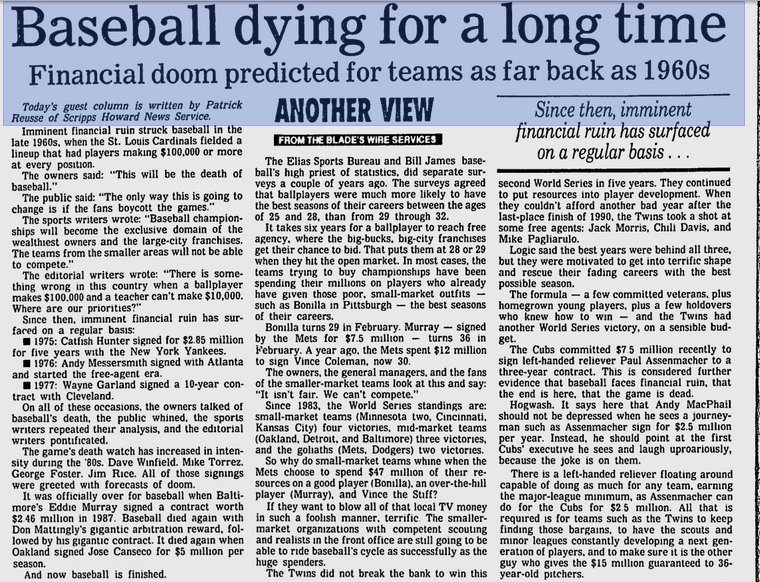 Level of death: Still not dying.

Money shot: “The major leagues are in chaos, leaderless, risking the wrath of millions of fed-up fans and the loss of hundreds of millions of dollars in TV money. Loyalties — player and team, team and community — are abandoned and traditions lost as greed reigns.”

Level of death: Headed to the ICU.

Money shot: “No wonder baseball is dying or — by the time you read this — already dead.” 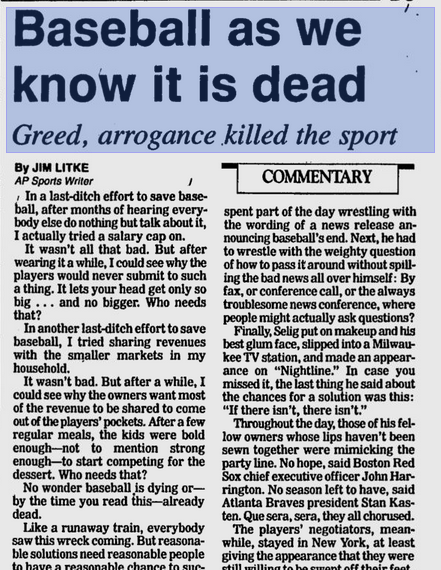 Money shot: "Baseball is dying, and the taxpayers who have helped feed the sport’s habit can only watch it happen." 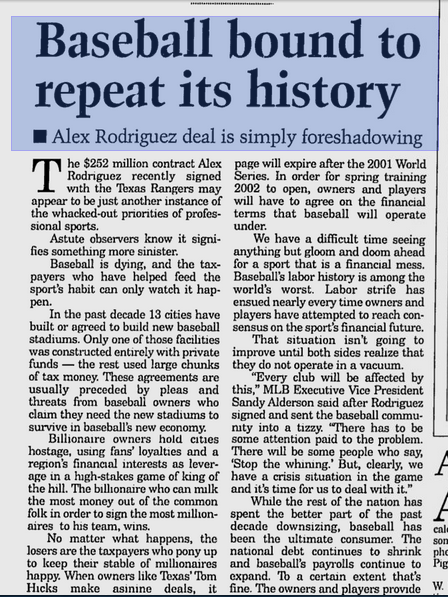 Money shot: "Baseball has been called the national pastime for 145 years, but it no longer permeates American society and is perhaps headed toward second-tier status as a sport.”

@TheHerd More proof baseball is dying…the print media (who made them) don't even know the sport. pic.twitter.com/ES8pQhAi4D

Another reason why baseball is dying http://t.co/W6jURIjs6X

stories like this are why Baseball is dying … up 2-0 in the Fifth and they shouldn't be trying to score? http://t.co/SQdep4HMQT

"Because the best players are on the west coast, baseball is dying." RT @hangingsliders http://t.co/100WF8946J

But Baseball is dying. Lol. MT @KDPomp: Another near sellout @PNC Will push attendance over 1.8 M. On pace for record pic.twitter.com/RsvP7QO9Kv

Level of death: In its infancy.