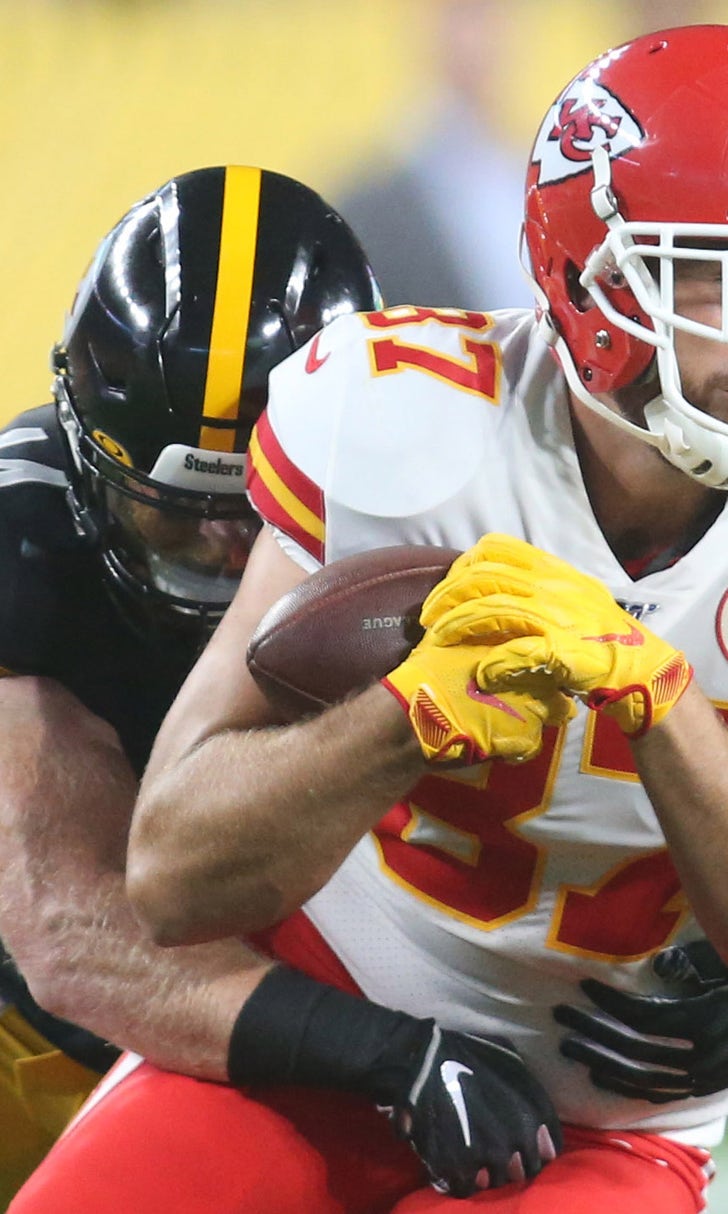 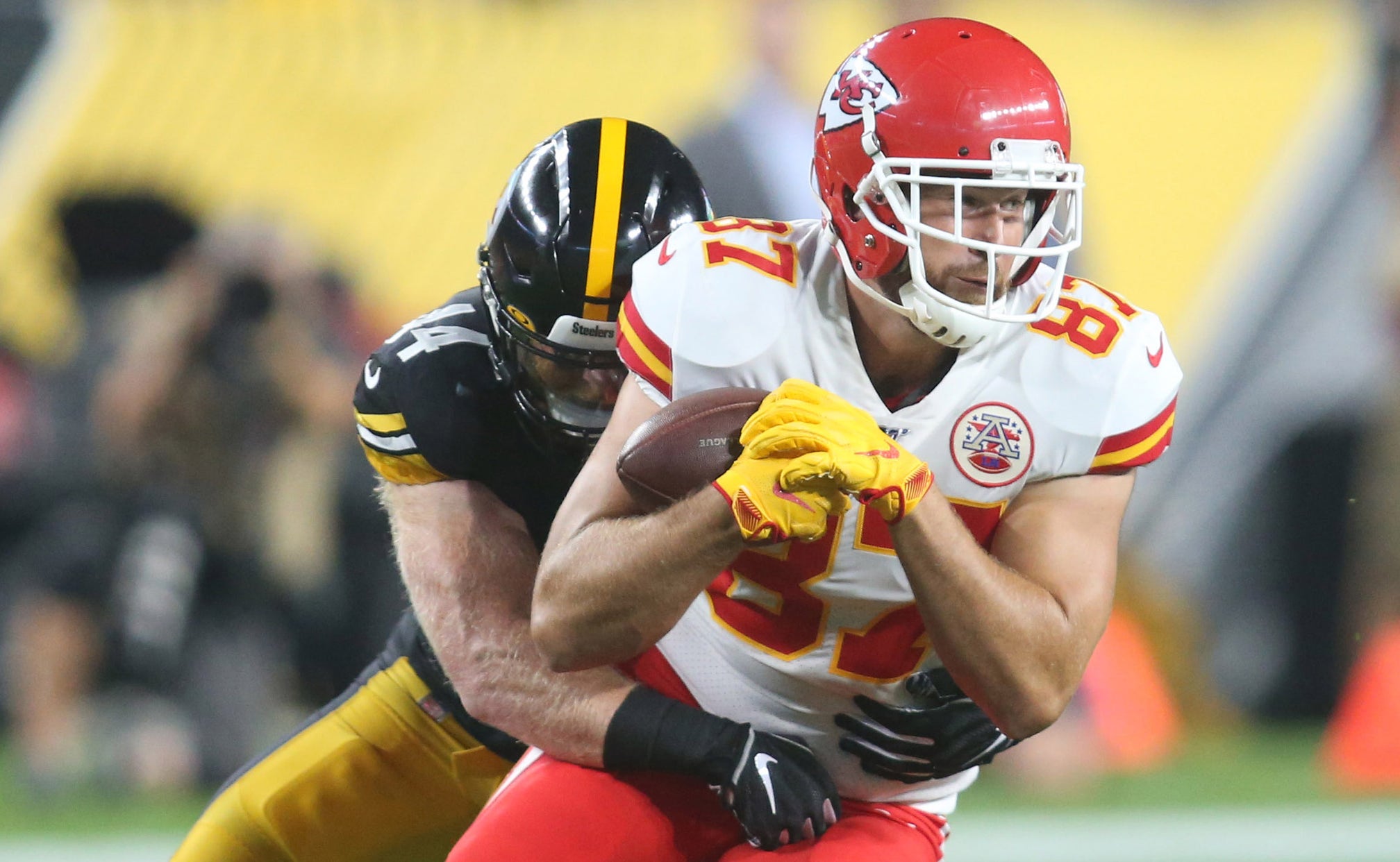 Chiefs held to one touchdown, fall 17-7 in second preseason game 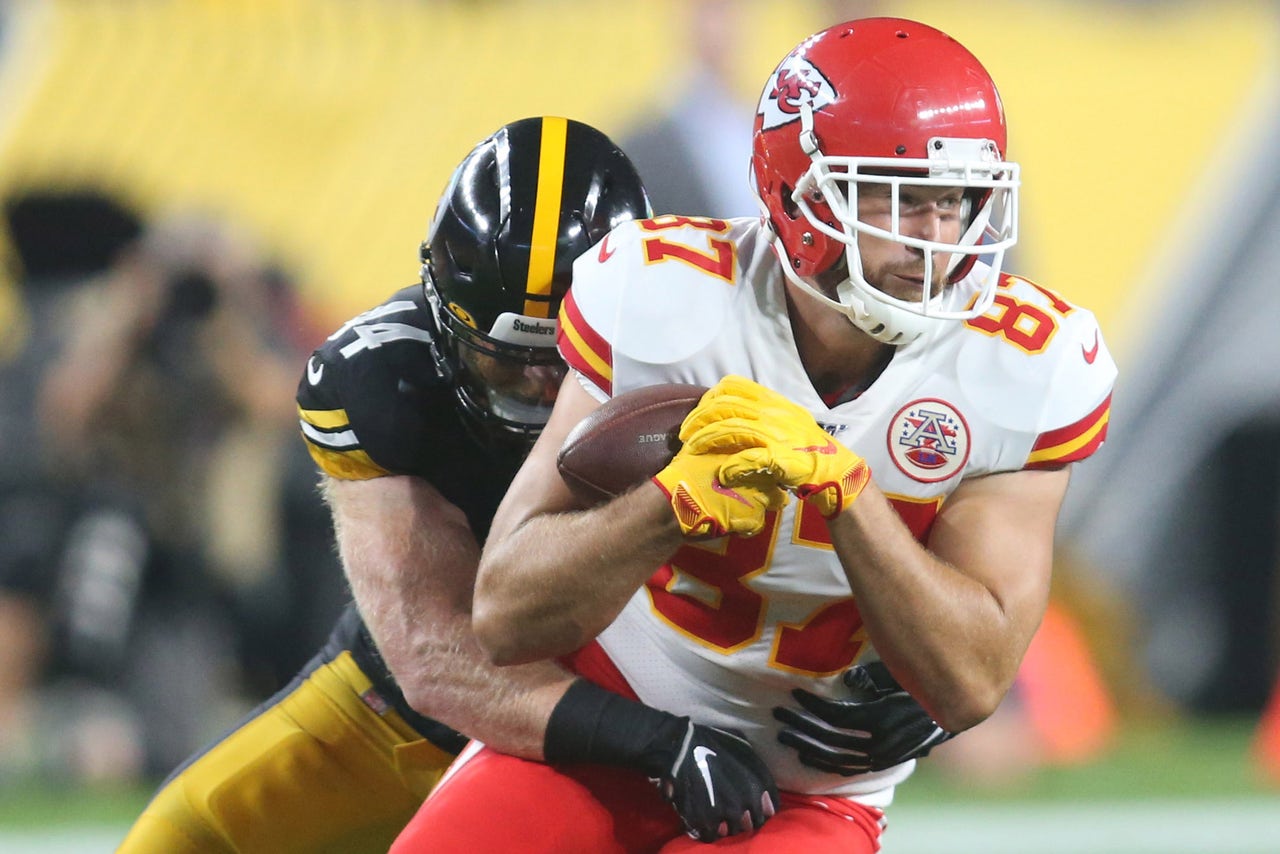 PITTSBURGH — Mason Rudolph guided a long first-half touchdown drive to perhaps nudge ahead of Josh Dobbs in the race to be the backup behind Ben Roethlisberger and the Pittsburgh Steelers beat the Kansas City Chiefs 17-7 on Saturday night.

Rudolph finished 10 of 15 for 77 yards while Dobbs completed 6 of 11 for 95 yards with a red-zone interception on a night the Steelers (2-0) opted to keep several key starters on the sideline, from quarterback Roethlisberger to Pro Bowl offensive linemen David DeCastro and Maurkice Pouncey to rookie linebacker Devin Bush.

Kansas City coach Andy Reid suggested Patrick Mahomes would play most of the first half.

The reigning NFL MVP — who directed a touchdown in his lone drive in Kansas City's preseason opener last week — did little during two series of work following a thunderstorm that forced the opening kickoff to be pushed back nearly an hour.

Mahomes completed just 2 of 5 passes for 11 yards, a far cry from his previous visit to Heinz Field, when he threw for six touchdowns in a Week 2 win last September that served as a harbinger of the season to come.

Mahomes' best play during his cameo may have been his decision to slide during an 8-yard scramble, something he didn't do a week ago when he lowered his shoulder against Cincinnati rather than step out of bounds.

Chad Henne found Mecole Hardman for a 17-yard touchdown late in the first half for Kansas City (1-1), which managed a lone touchdown a week after putting up 38 against the Bengals. Hardman, a second-round pick, has two touchdowns in two weeks and his rapid emergence could give Reid another option to play with in what could be the NFL's most potent offense.

Pittsburgh chose to give the 37-year-old Roethlisberger the night off. Rudolph, a third-round pick a year ago who is hoping to supplant Dobbs as the top backup, was given the start instead. Playing with a group that included Pro Bowl running back James Conner and star wide receiver JuJu Smith-Schuster, Rudolph struggled early to gain some momentum.

It wasn't until Rudolph found himself playing with the reserves that he started to get going. He directed a 14-play, 89-yard drive in the second quarter, a series that ended with a 14-yard sprint to the end zone by Jaylen Samuels.

Dobbs started off brilliantly, hitting Washington for a 40-yard gain. He couldn't sustain the momentum, thanks in part to an interception in the end in which he overthrew Diontae Johnson. The ball sailed into the arms of Kansas City's Charvarius Ward to cut short a scoring chance late in the first half.

Johnson, a third-round pick, ended up scoring in the fourth quarter when he made a diving grab in the end zone on a heave from fourth-stringer Devlin Hodges.

THIS BUD'S FOR YOU?

Steelers outside linebacker Bud Dupree is entering the season with a significant amount of pressure after Pittsburgh opted to pick up his fifth-year option but have not approached him about signing a long-term deal. Dupree provided a spark, sacking Mahomes and Henne and knocking down a pass.

A difficult week that began with the sudden passing of wide receivers coach Darryl Drake at age 62 ended with the Steelers making sure Drake's legacy won't be forgotten.

Coach Mike Tomlin and general manager Kevin Colbert and their wives attended Drake's funeral in Gallatin, Tennessee. The wide receivers took the field for warmups with shirts emblazoned with the phrase "Shut out the noise," the credo Drake adopted for his group for the 2019 season.

Dozens of Steelers knelt for a prayer shortly before kickoff and the team will wear "DD" stickers on their helmets this season and a moment of silence was held just before the national anthem.

The Chiefs didn't escape Heinz Field unscathed. Safety Tyrann Matthieu left with a shoulder injury. Wide receiver Deon Yelder went down with a knee injury and Marcus Kemp exited with a knee injury. Linebacker Breeland Speaks suffered a knee injury in the second half and did not return. Quarterback Chase Litton was taken out in the final seconds after taking a hard hit shortly after releasing a pass.

Steelers: Expect to give Roethlisberger his only reps of the preseason next Sunday when they visit Tennessee.

Herd Hierarchy: Week 12
It's a bloodbath in the latest "Herd Hierarchy," where Cowherd has tossed out four top 10 teams from last week.
2 days ago

Commander in Chief
Mahomes and the Chiefs got their revenge Sunday, and proved that even a perfect game plan is not enough to stop them.
4 days ago

Two-Horse Race
Geoff Schwartz says the Chiefs and Steelers have separated from the AFC pack, and he picks the horse to bet on in the NFC East.
4 days ago
those were the latest stories
Want to see more?
View All Stories
Fox Sports™ and © 2020 Fox Media LLC and Fox Sports Interactive Media, LLC. All rights reserved. Use of this website (including any and all parts and components) constitutes your acceptance of these Terms of Use and Updated Privacy Policy. Advertising Choices. Do Not Sell my Personal Info