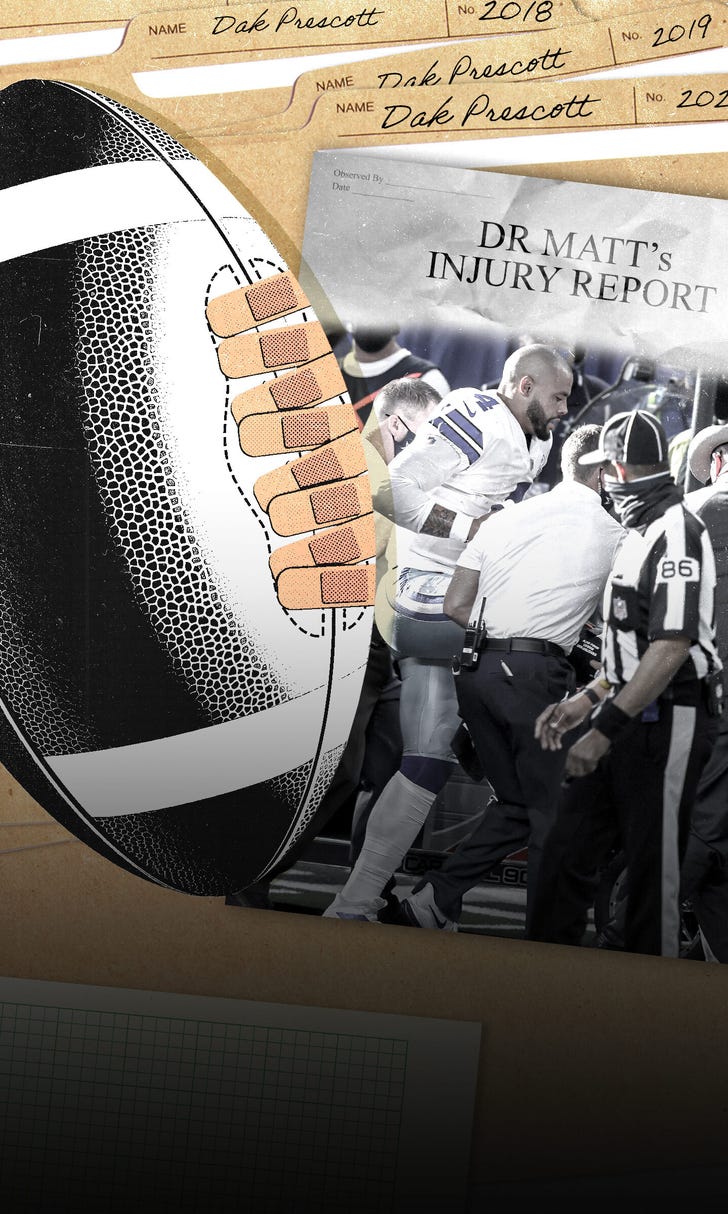 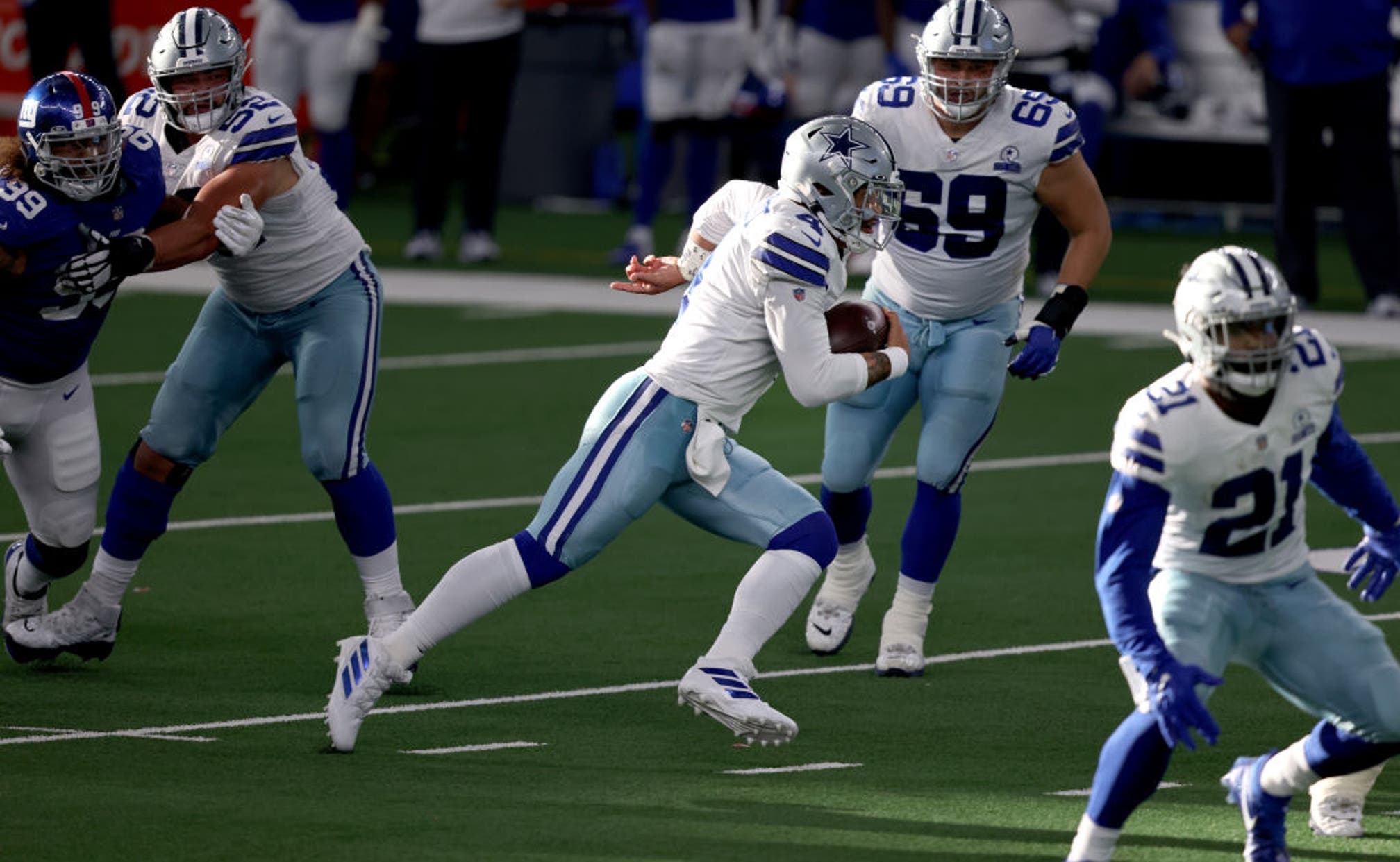 The Dallas Cowboys were officially eliminated from the playoff race on the final day of the regular season, but a case could be made their season was decided when Dak Prescott went down with a catastrophic leg injury in Week 5.

The Cowboys have plenty of questions to address this offseason, but Prescott’s future might very well be the biggest of the bunch. What factors are at play for Prescott and the Cowboys? Let’s dive in below.

Ed. note: All this week, FOX Sports will be looking at the biggest storylines surrounding the Cowboys this offseason. In Parts 1 and 2, Matt Mosley explored What Went Wrong In Dallas and the Dak Dilemma. Here, Dr. Matt Provencher examines Prescott’s injury, including his recovery timeline, how it could impact his performance and the impact the injury could have on his future in Dallas … or elsewhere.

What is the nature of Prescott’s injury?

Specifically, the ankle joint is made up of several bones – the top and sides of the joint are the tibia and fibula, where the bottom is the talus. The ankle fracture-dislocation usually breaks the tibia and the fibula bones so that the joint is "dislocated" out of socket. The key to management is prompt reduction (which was extremely well done by the Cowboys medical staff), and then stabilization with plates and screws.

Recovery is divided into several phases and this is where the team medical staff truly shine. They work hours daily on injuries like this with a multidisciplinary approach — initially with physical therapists, in conjunction with athletic trainers, acupuncture, and then strength and conditioning experts. 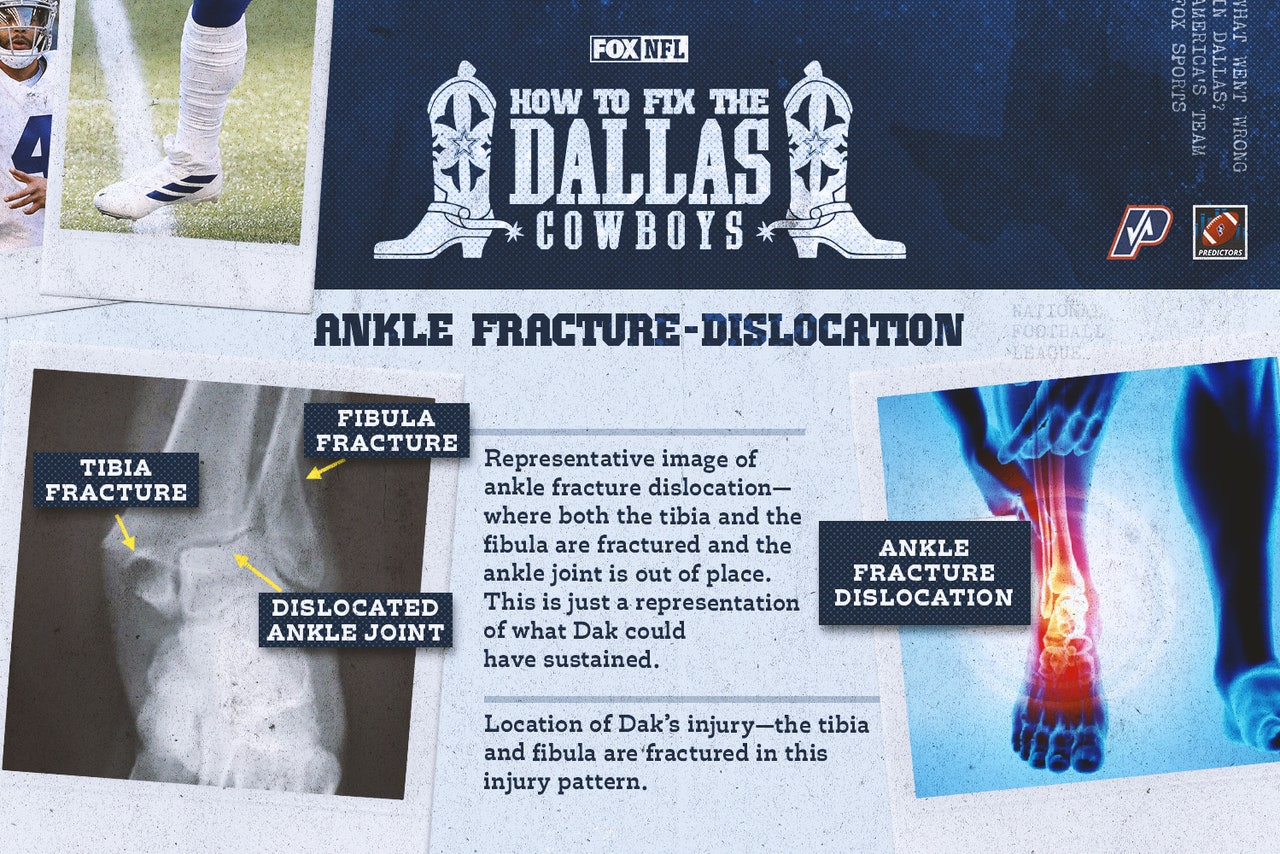 1. Initial actuate phase 0-6 weeks after surgery. Crutches and gentle passive range of motion to preserve motion in the joint, wake up the muscles in the calf and keep swelling down (edema control).

2. Phase 2: 6-12 weeks after surgery. This is a key phase to start increasing range of motion and working on stretching out the joint to get full motion of the ankle in all planes as well as the foot. The ankle joint basically does flexion and extension (also known as plantarflexion and dorsiflexion, respectively). Crutches are weaned during this time to one crutch by anywhere from six to eight weeks, and then progressive loading of the joint occurs with light weights and light squats.

Of course, X-rays during the follow-up are key to ensure the joint and bones are maintained in alignment. Progressive work on the muscles, initially with rubber bands, then weighted exercises are key. All while working on obtaining full range of motion of the ankle joint.

3. Phase 3: Approximately 12-20 weeks after surgery. This is when the strength and conditioning starts – but only after passing the phases above – which are tailored specifically to how the recovery is progressing. Thus, this is a rough estimate of the recovery timeline, but, generally, by about three to four months after the surgery, Prescott will be ready to take on more loaded activities through the ankle joint (think squats with progressive weight – light at first—a key exercise for a football player!).

Then additional plyometrics, working on muscle and coordination of the joint and working on what we call proprioception – which means the body and the mind know exactly what position your joint is in without looking at it. This is crucial to the recovery of a joint – proprioception, as this allows athletes to produce millisecond adjustments to their joints to perform on the field.

This takes a long time and commitment of retraining the mind to rewire the proprioception nerve fibers to the ankle joint so Prescott can know instantaneously where his ankle joint is and how to make adjustments to avoid an opponent.

4. Phase 4: After 18-20 weeks and extends into weeks 24-28 of training. This will be resuming full NFL activities (best estimate), and getting back on the field with agility, cutting, and other turf activities to get in football shape. This will be highly coordinated by the medical staff on when this transition will be allowed as this gives the player confidence to return to play and the tools that he needs to excel on the football field.

Once cleared by the medical staff to enter this phase, Prescott can really start to ramp up his activities. This is an estimate given the timeline and progression thru the prior phases.

What type of performance should we expect when he returns?

This is a bit tricky in that we have several factors at play here. First, you have a significant ankle injury to a QB that is highly mobile. Over the last 10 years in the NFL, these types of injuries to QBs are actually pretty rare (compared to other positions such as running back, wide receiver, tight end and linebacker, which have much higher incidence, but still relatively uncommon incidence of ankle fracture-dislocation).

This might be due to the increased ability of mobile quarterbacks to excel on the NFL playing field and have their bodies behave more like a running back or tight end.

In addition, Prescott is an exceptional player with the ability to have multiple threats in the pocket as well as outside the pocket and to elude defenses routinely. Prescott is resilient and tough, and I expect his ability to succeed will be better than the data, which predicts an overall decline in performance the first two years after his return from this injury.

When you look at the data, there are some declines in overall performance – as he relied on his mobility and his agility to evade defenses. 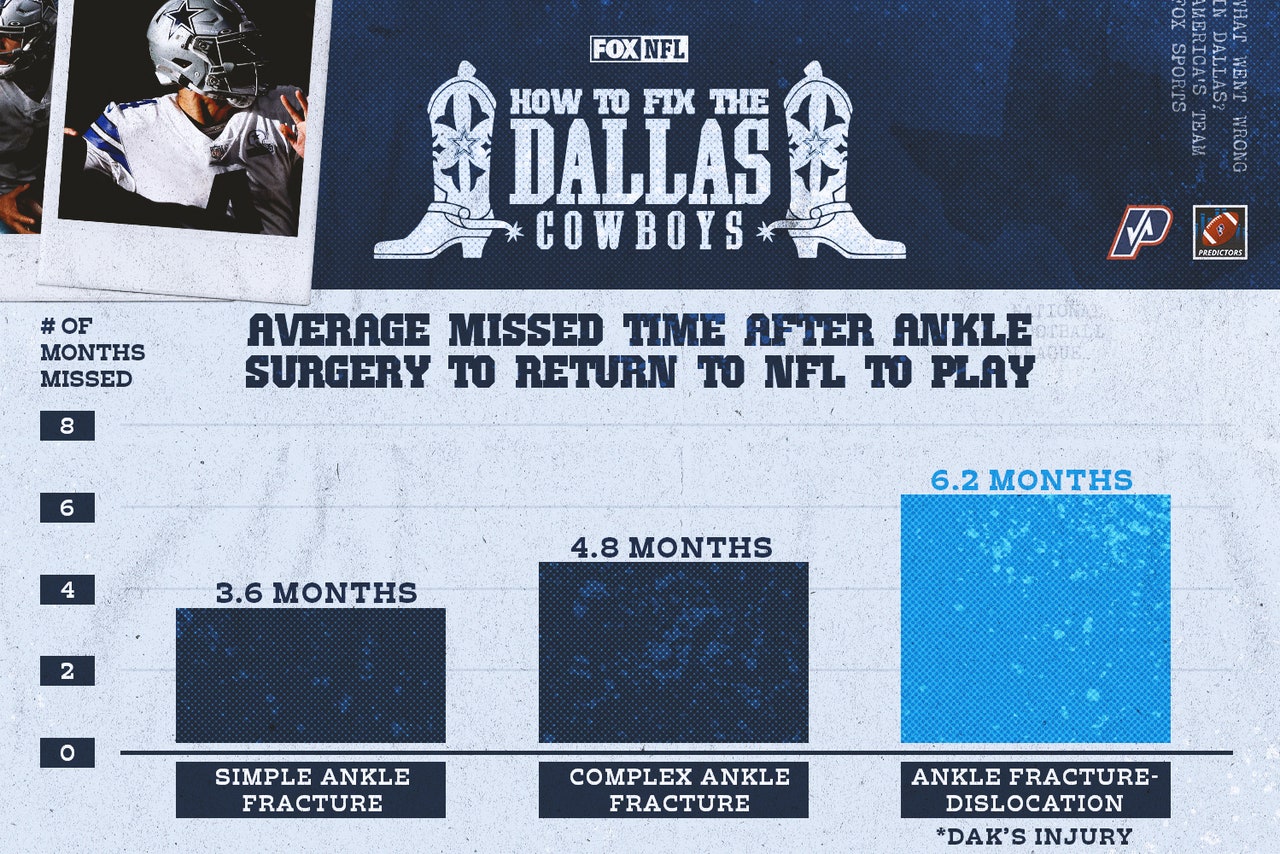 Using modeling over the last 10 years, we would predict the following, but keep in mind Prescott will likely beat these odds and estimates: Approximately an 11 percent decline in total offense, as well as an 18 percent decline in fantasy points.

How will it impact the rest of his career?

This is an important question in that the ankle joint certainly took a significant injury, but with prompt treatment (done here), reduction and stabilization, the ankle bones heal quite well and he can go on to a long career in the NFL. However, the area that was dislocated is a joint and if there was a significant cartilage injury (unknown at this time) to the joint surface on either side of the ankle – there can be lasting effects of what we call "Post-Traumatic Arthritis (or wear and tear) in the ankle joint.

This does not show up right away, but Prescott might have to deal with some mild swelling and/or occasional pain in the ankle joint at the end of a long day of practice or a game. However, this is well managed by not only the player, but also the medical staff with many different modalities that can help keep the joint in good working condition.

Thus, if he is able to manage these issues (and many players have done this in the past), he should have a successful career.

Should the Cowboys have any hesitancy in committing $40 million-plus to a QB coming off these injuries?

Although this is a serious injury – the Cowboys should have faith Prescott is going to come back and have a very successful season in 2021 and beyond. Now, longevity questions aside (see above), Prescott should have a solid, but slightly decreased performance from his prior numbers in the early part of the 2020 season.

Prescott is one of the hardest workers out there, and I am confident he will be able to recover to a level that allows him to be usual self. It might take some time – and patience might be difficult, especially the first year or two back after a major injury, but Dak stands to make a solid and sustained recovery. Again, our data shows the declines initially, but then improvement over time.

What role does a team's medical staff in advising the club signing players off injuries, like Prescott in this situation?

First and foremost, the team medical staff’s first priority is the health, safety, and well-being of the player. They are responsible for ensuring the players have access to cutting-edge and proven medical care, and their interest is always aligned with the player in mind.

However, one role the medical staff takes on is as an advisor to the team coaching staff and ownership regarding return-to-play decisions, player load management (how much they practice to help injury recovery), and assessing player injuries and the timing of return to play. They also would advise on potential performance load and the total amount of game participation.

The league set up a careful set of checks and balances. In the Collective Bargaining Agreement (CBA), it is clearly outlined that every player has a right to a second medical opinion of their choice to ensure they are comfortable with the injury assessment, treatment and return-to-play guidelines.

My experience has been the team medical staffs do an outstanding job at taking great care of the players, ensuring their autonomy in decision-making, and providing them the data they need to make a decision. Of course, this is a complex process, but one in which the teams and league take very seriously to protect the health and safety of the players.

In Prescott’s situation, the medical staff will be caring for his ankle and keeping him informed of his progress, apprising him of any setbacks (hopefully not), and communicating with his entire care team to ensure optimization of recovery.

In addition, they are also obligated to keep the coaching staff and the team leadership in the loop regarding his progress. For the most part, this will be: 1) Is Prescott hitting his therapy milestones? 2) Has he has any setbacks? 3) Are there any delays in recovery or other issues that might affect his return to play and performance?

Prescott's care team and the QB himself will be highly invested and knowledgeable about his overall progress.

A Problem in Houston
Deshaun Watson is not happy with the Texans, and reports are that a trade is not off the table. How did we get to this point?
4 mins ago