The greatest! Tom Brady and the Patriots stand alone in NFL history after Super Bowl shock

If there had been any lingering questions about the greatest quarterback, coach and team in NFL history, Tom Brady, Bill Belichick and the New England Patriots erased any and all doubt on Sunday night with a stunning 25-point comeback win over the Atlanta Falcons in Super Bowl LI. It was the Pats’ fifth title in seven tries in the Brady-Belichick era as well as the biggest comeback in Super Bowl history. Given the circumstances, it was perhaps the greatest the sport has ever seen.

In doing so, Brady, who threw for a Super Bowl record 466 yards, added something to his stacked résumé that he hadn’t had before: a career-defining comeback courtesy of a historic drive. Oh, the future Hall of Famer has had countless great drives and important comebacks in his career but he’d yet to have the magical one that would forever define him, like Joe Montana did in Super Bowl XXIII or John Elway did on the original edition of “the drive.” And then New England got the ball on their own 9-yard line, down eight points with 3:30 left.

After two quick incompletions, the Pats faced third-and-10 and, without a first down, a likely punt that would have put the game in the hands of the New England defense. But before you could ponder the timing, timeout and field position situation, Brady hit Chris Hogan for a first down and then, in order, found Malcolm Mitchell, Julian Edelman, Danny Amendola and James White (x2). In all, Brady went 6-9 for 90 yards to five different receivers to set up a White rushing touchdown and a successful, game-tying two-point conversion on a throw to Amendola. The most amazing part was how ordinary he made it seem. (The Edelman catch was a shoestring all-timer, but it came on first-and-10 – hardly a do-or-die situation.)

The beginning of the comeback was almost as thrilling as the end. New England was down 28-3 with 2:07 remaining in third quarter. The press box at NRG Stadium was surely filled with the clacks of takes on the future of Brady, whether this was the start of a nadir for Belichick’s Pats and if this might be the beginning of a run for the high-powered Falcons. And then, as quickly as Atlanta got out to what seemed like an insurmountable lead, the Pats wiped it away. Four scores on four-straight drives to close the game – including multiple two-point conversions when New England needed both – gave us the first overtime in Super Bowl history. New England won the toss and went on a Sherman-esque march on Atlanta to get into the end zone and keep Matt Ryan from ever touching the ball in the extra session.

And it was all due to a 39-year-old who spent most of the first three quarters dodging pass rushers (sometimes unsuccessfully), floating passes and throwing the first pick-six of his illustrious playoff career.

Despite the deficit and the bizarre fact that in 50 Super Bowls the biggest comeback was only 10 points (accomplished three times), once New England scored to cut the lead to 28-9, there was a complete shift in momentum that made a comeback feel – well, if not inevitable then highly possible. The Falcons almost staunched the bleeding – they had a third-and-1 that became a strip-sack fumble and then, on their final real drive of the game, suffered another crushing sack after Julio Jones made an all-time catch that would have gone down in Super Bowl history if the result had gone the other way. It was eerily reminiscent of Jermaine Kearse’s catch inside the 5 at the Pats-Seahawks Super Bowl, right down to the fact that it was rendered irrelevant seconds later. That sack led to the punt that set up the 91-yard drive.

You can give windows to lesser players and lesser teams, but give Brady and the Pats a sliver and they pounce. And pounce they did.

While it takes two to tango – or, in this case, blow a lead with a series of plays and decisions that looked like something you’d see at a Saturday morning JV game – this was more about a New England comeback than an Atlanta choke. Too often we make the mistake of believing a football game should be decided after 30, 40 or 50 minutes, as if a team that’s up after three quarters has earned the win merely because they scored more in the first 75% of the game. (Atlanta seemed to think that too. The postgame quotes push a different story but when you’re a team new to the big time and up by four scores over the sporting dynasty of the century, you can’t help but have such thoughts creep into your head.)

The game, of course, goes for the full 60, in regulation at least. And in those final 15 minutes, New England sensed Atlanta’s defense, which had been on the field far too long due to Ryan’s quick-strike offense and Brady’s pick-six, was gassed. They were huffing and puffing with their hands on their hips and making breaks to the ball that were a half-step slower than earlier in the game. The Pats chipped away.

Sixty minutes. Not forty. And when the game went beyond 60, into the overtime the Super Bowl has been waiting years to see, Atlanta had no shot to stop the Pats. Not after four-straight scores (not including the drive at the end of regulation) and especially not after the coin toss went New England’s way. Heck, even if the Falcons had won the toss, I doubt it would have made much of a difference.

In OT, Brady went, ho-hum, 5-6 for 60 yards, making him 11-15 for 150 yards in his last two drives. For a player who’d already done so much in the game, it was his finest hour. And it came at an age when most quarterbacks are retired and in a year that saw him suspended for the first quarter of the season.

What does the win mean for Brady and the Pats? Is it that big a deal? I mean, going 4-3 in seven Super Bowls still would have been enough to clinch G.O.A.T. status for the Pats. Brady was already in the discussion about the best QBs to ever get under center. But five? Five, with only two upset losses to the New York Giants besmirching their record? That moves the Pats to a tier no NFL franchise has come close to reaching and is unlikely to ever near again.

Rings are rings but does that mean the Pats are really the best? After all, there’s a taint associated with two of their five wins (St. Louis and Philadelphia), a sense that another was gift-wrapped by the Seahawks two years ago and then Atlanta giving up the biggest lead in Super Bowl history. That’s a whole bunch of ammunition for a crowd that wants to say Chuck Noll’s Steelers, Bill Walsh’s 49ers, Joe Gibbs’ Redskins or Jimmy Johnson’s Cowboys were the better team.

Nonsense. The alleged spying on the Rams will be argued forever with no resolution. Philadelphia? C’mon. The only thing the Pats would have found on videotape is that Donovan McNabb would shrink in the spotlight. And as for the Seahawks and Falcons: So what? Sure, the Seahawks never should have thrown that ball and New England should have lost. And Matt Ryan should have thrown that ball away. But you can play that game forever. Maybe the Pats should be 7-0! After all, the Giants got lucky with the Tyree catch in Super Bowl XLII (the 18-1 game) and the Manningham catch in Super Bowl XLVI. Or maybe we should ponder the alternate reality that could have started with a loss in the Tuck Rule game and led to New England being just another team that lost in the playoffs most years. The “what ifs” are fun but when reality is right in front of you, it’s a fool’s game.

This is the way football works. Games are decided by luck as much as skill (e.g. the Julian Edelman catch). Unless there’s an overt situation that unfairly changes the complexion of the game (e.g. the tuck rule game or the Fail Mary), no football win is ever assumed. It’s that thinking that led Tom Brady to his most unlikely of wins, a mind-boggling fifth championship when it seemed as if there was barely a flicker of hope, which was all Brady, Belichick and the Pats needed.

Tom Brady started Super Bowl LI looking every bit like the 39-year-old quarterback he is. The inevitable loss would have been the result of a myriad of issues but all would crystalize around Brady, who gets the love when things go well and rightfully deserves the scorn when they don’t. And then, with nary a warning, Tom Brady went from being the Super Bowl goat to seizing his rightful place as the other kind of G.O.A.T.. Five rings. Seven games. A comeback for the ages. Appreciate it because we’ll never see anything like this again. 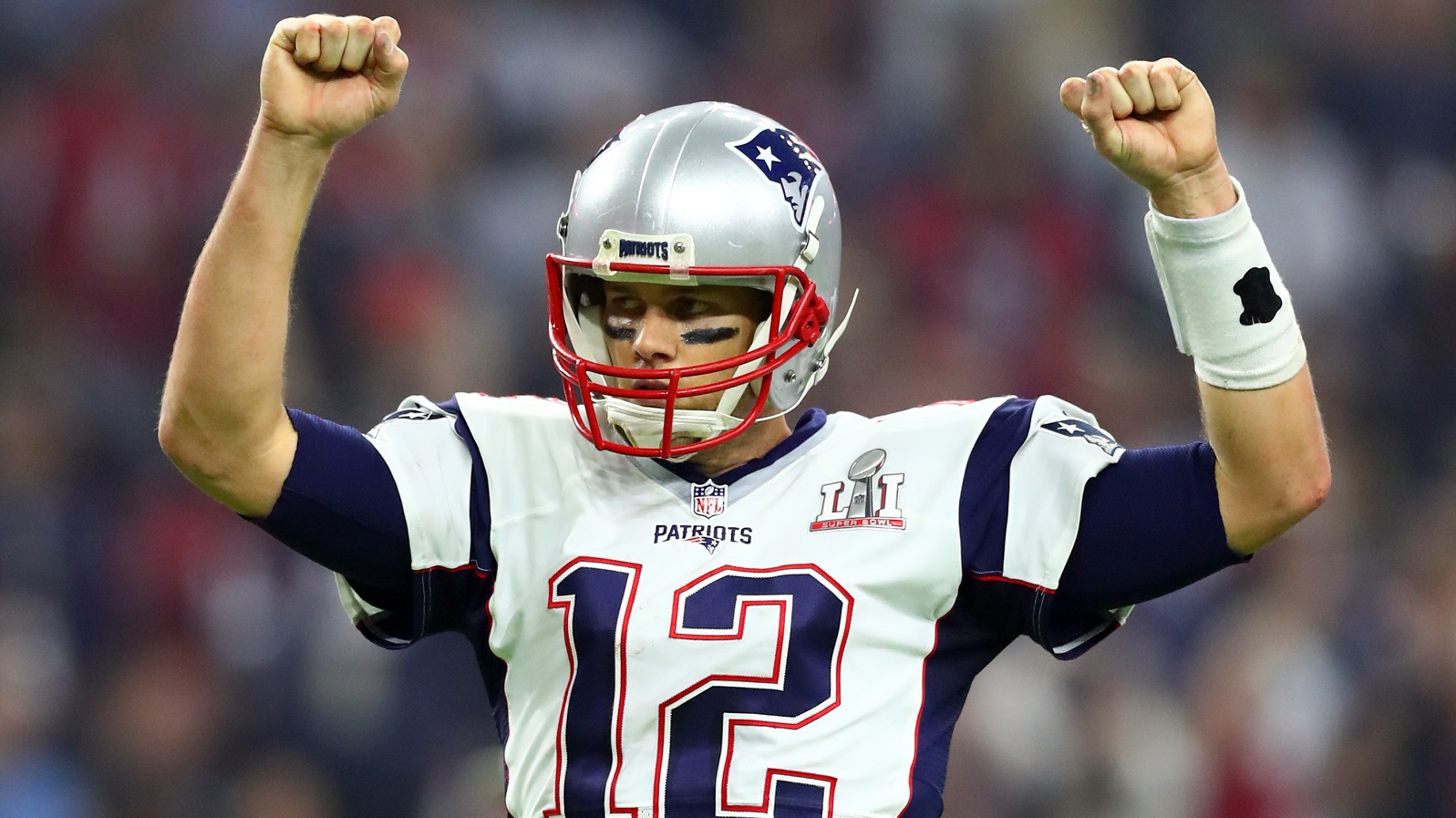