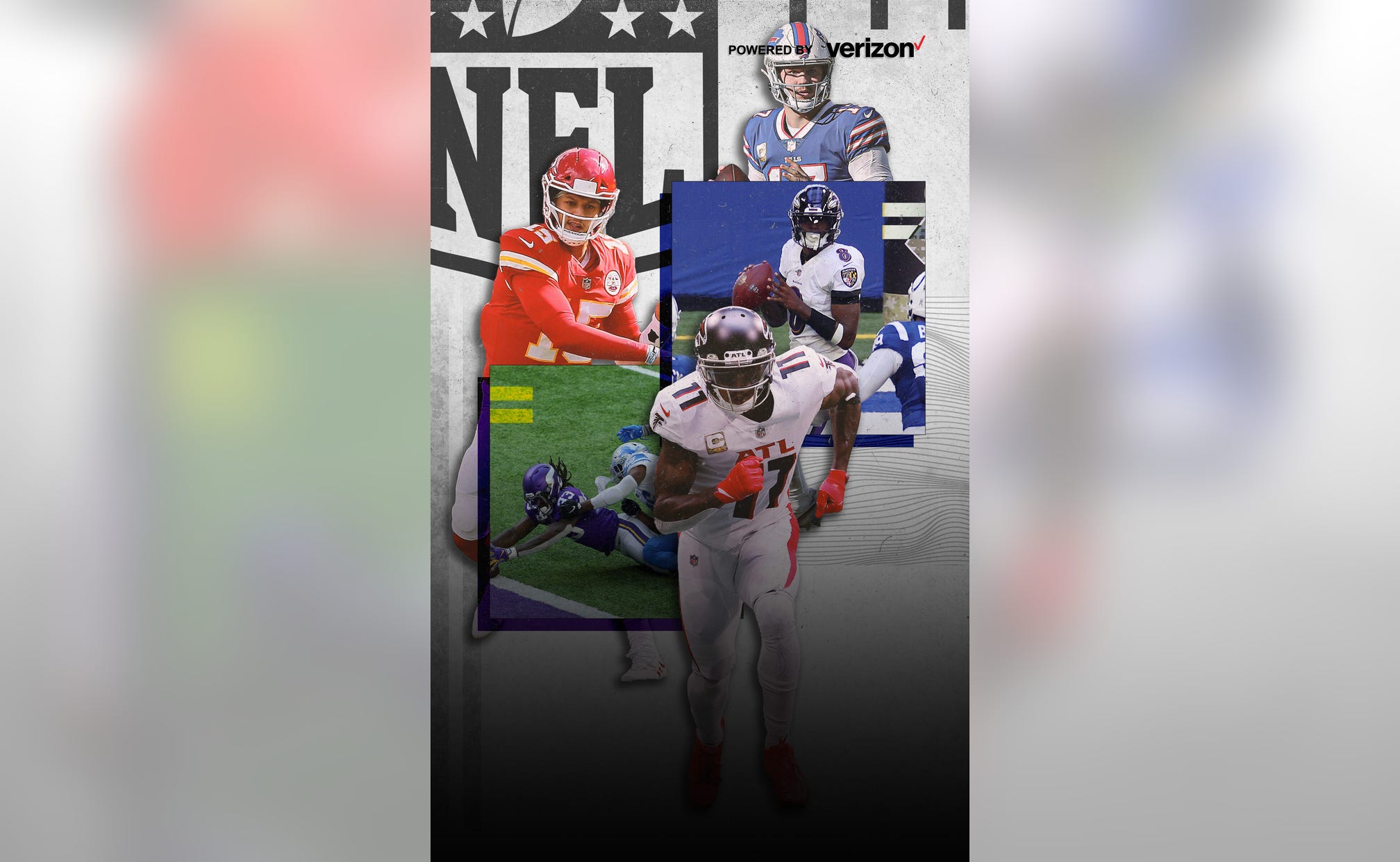 The Week 9 early window saw its fair share of fireworks and milestones, as the NFL barreled into the second half of the 2020 season.

Patrick Mahomes and JJ Watt both hit impressive century marks in victories for their respective teams, while Josh Allen out-dueled Russell Wilson in a frustrating loss for Seattle.

Here are all the major takeaways from the eight games in the early window of Week 9:

Josh Allen booted Russell Wilson from the kitchen, at least for a day, as the Bills outlasted the Seahawks, 44-34, in a frenetic Buffalo victory.

The Bills set the tone early with a long kickoff return and score on their first possession, but there would be ample scoring throughout the game’s duration.

Allen completed 31 of 38 pass attempts for three touchdowns and 415 yards, while also collecting a rushing touchdown.

Russell Wilson scored a TD on the ground and two through the air, but was uncharacteristically sloppy with the ball on Sunday.

The favorite for the regular season MVP award threw two interceptions and coughed up the football twice via fumbles, all of which the Bills converted into points on their ensuing drives.

The win moved Buffalo to 7-2 on the season and put them in firm control of the AFC East, while the Seahawks dropped just their second game of the year, now sitting at 6-2.

It wasn’t the prettiest win for Baltimore, but the Ravens got the job done on the road with a 24-10 win, ending a 3-0 unbeaten streak for the Indianapolis Colts at Lucas Oil Stadium.

Baltimore’s opportunistic defense found the end zone in the first quarter with a scoop and score, marking the Ravens' 21st consecutive game with a takeaway.

The Colts defense had a strong first half, keeping Lamar Jackson and the Ravens contained and taking a 10-7 lead into the half.

And while the Colts opened the second half with a red zone takeaway, eventually the Ravens found a breakthrough on a short touchdown from Gus Edwards in the third quarter.

Jackson, who ended the day without a passing TD, put the game on ice with a nifty rushing touchdown to end the third.

From there, it was all Ravens, as the defense continued to give Philip Rivers and the Colts fits with two fourth quarter stops on fourth down.

Patrick Mahomes made even more history and the Kansas City Chiefs rallied late to squeak past the Carolina Panthers, spoiling Christian McCaffrey’s strong return in a 33-31 win for Kansas City.

McCaffrey, who missed six games with a high ankle sprain, got things going for Carolina with the game’s first touchdown.

The All-Pro running back finished the day with 18 carries for 69 yards and a score, while also hauling in 10 catches for 82 yards and a TD.

Still, McCaffrey's efforts weren't enough to overcome Mahomes and the Chiefs, as Kansas City’s talisman found his footing after a slow start, finishing the game with 372 passing yards and four touchdowns.

Mahomes’ third TD of the day, a 28-yard seed to Tyreek Hill, cemented the his spot as the fastest player to reach 100 career passing touchdowns in league history.

The win also moved Andy Reid into the top five for all-time head coaching wins, as the Chiefs will now head into the bye week sitting at 8-1.

The Tennessee Titans kept the Chicago Bears on the ropes all afternoon in a 24-17 triumph that saw Chicago punt six times and turn the ball over twice.

The Titans converted one of those turnovers into instant points, courtesy of Desmond King, who they snagged at the trade deadline.

Ryan Tannehill enjoyed a solid day with a pair of touchdowns, including a 40-yard gem to AJ Brown, who celebrated with a wink and nod to Antonio Brown.

It was a quiet day for Titans running back Derrick Henry, who was held at bay in the first half with 26 yards on 13 carries, and eventually finished the game with 68 yards on 21 carries.

Washington hangs on against Giants

A scramble for a fumble between the Giants and Washington perhaps best encapsulates the 2020 season for the woebegone NFC East thus far.

The G-Men took an early lead and a 20-3 advantage into the half, after an ankle injury to Washington starting QB Kyle Allen saw the return of Alex Smith to the field.

Smith threw for over 300 yards and a touchdown in his return, but also had a trio of costly interceptions.

Daniel Jones continued his dominance against WFT from a results perspective, moving to 4-0 in his career against his division rivals.

For a minute, it looked as though the Falcons were going to do it again – “it” being blow a fourth quarter lead.

But despite giving up 21 points in the game’s final quarter, the Falcons breathed a sigh of relief, as Denver turned the ball over on downs before Matt Ryan kneeled to burn off the clock’s remaining seconds for a 34-27 win.

Speaking of Ryan, he put the Falcons up early with a first quarter touchdown to wideout Olamide Zaccheaus.

Zaccheaus filled in admirably for the absent Calvin Ridley with four catches for 103 yards. Ryan closed up shop with a final stat line of 25-for-35 for 284 yards and three touchdowns, including a long bomb to Julio Jones.

On a bright note for Denver, rookie wideout Jerry Jeudy had seven catches for 125 yards and a touchdown, his second receiving touchdown of the season.

The Texans and Jaguars started off with a flurry, as both teams found pay dirt on long touchdowns on each of their opening possessions. With starting quarterback Gardner Minshew out injured, the Jags turned to rookie Jake Luton.

Luton’s first NFL completion was certainly one to remember, as he found DJ Chark for a 73-yard touchdown to put the Jags up early.

Jacksonville’s joy would be short-lived, however, as Deshaun Watson and Brandin Cooks responded with a 57-yard touchdown of their own to even the score.

After trading blows back and forth, it looked as though a 77-yard Will Fuller score would put the game on ice at 27-16 in the third quarter, but the Jags rallied and wound up in a position to tie the game with a late two-point conversion.

Ultimately, the two-point attempt failed and Fuller’s touchdown, his sixth in six games, remained the difference in the 27-25 victory for Houston.

The game also saw JJ Watt hit a long-awaited milestone, as the defensive end picked up his 100th career sack.

Dalvin Cook and the Minnesota Vikings made short work of the Detroit Lions in a 34-20 win at U.S. Bank Stadium. Kirk Cousins carved up the Lions with 220 passing yards and three touchdowns on 13 of 20 attempts.

A pair of those touchdowns found their way to tight end Irv Smith, who had two career TDs coming into the game.

But the story of the day was Dalvin Cook, who continued his sensational return from injury with another jaw-dropping performance.

The Vikings running back racked up 206 rushing yards and two touchdowns to move the Vikings to 3-5 on the season.

Who's Playing QB For The Broncos?
All three Denver QBs will miss Sunday due to COVID protocols. So who in the world is going to take the snaps vs. the Saints?
2 hours ago

The Path of Least Consistence
For the NFC East, wins haven't been aplenty. However, intrigue has been in never-ending supply.
3 hours ago

What You Need To Know To Win $100,000
NFL fans have a chance to win big absolutely for free this week. Jason McIntyre is rolling with Tua, Kyler, and more.
3 hours ago

Colin Cowherd's Blazin' 5: Week 12
Check out Colin Cowherd's favorite five picks against the spread ahead of Week 12 action in the NFL.
13 hours ago
those were the latest stories
Want to see more?
View All Stories
Fox Sports™ and © 2020 Fox Media LLC and Fox Sports Interactive Media, LLC. All rights reserved. Use of this website (including any and all parts and components) constitutes your acceptance of these Terms of Use and Updated Privacy Policy. Advertising Choices. Do Not Sell my Personal Info