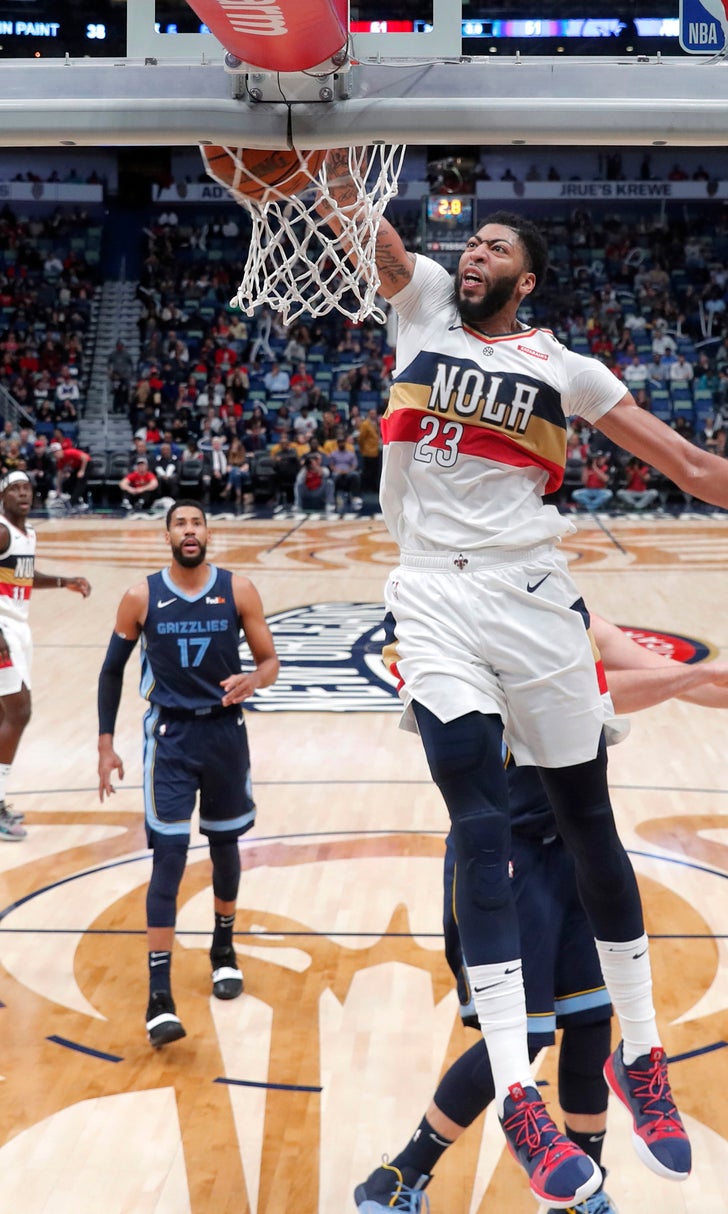 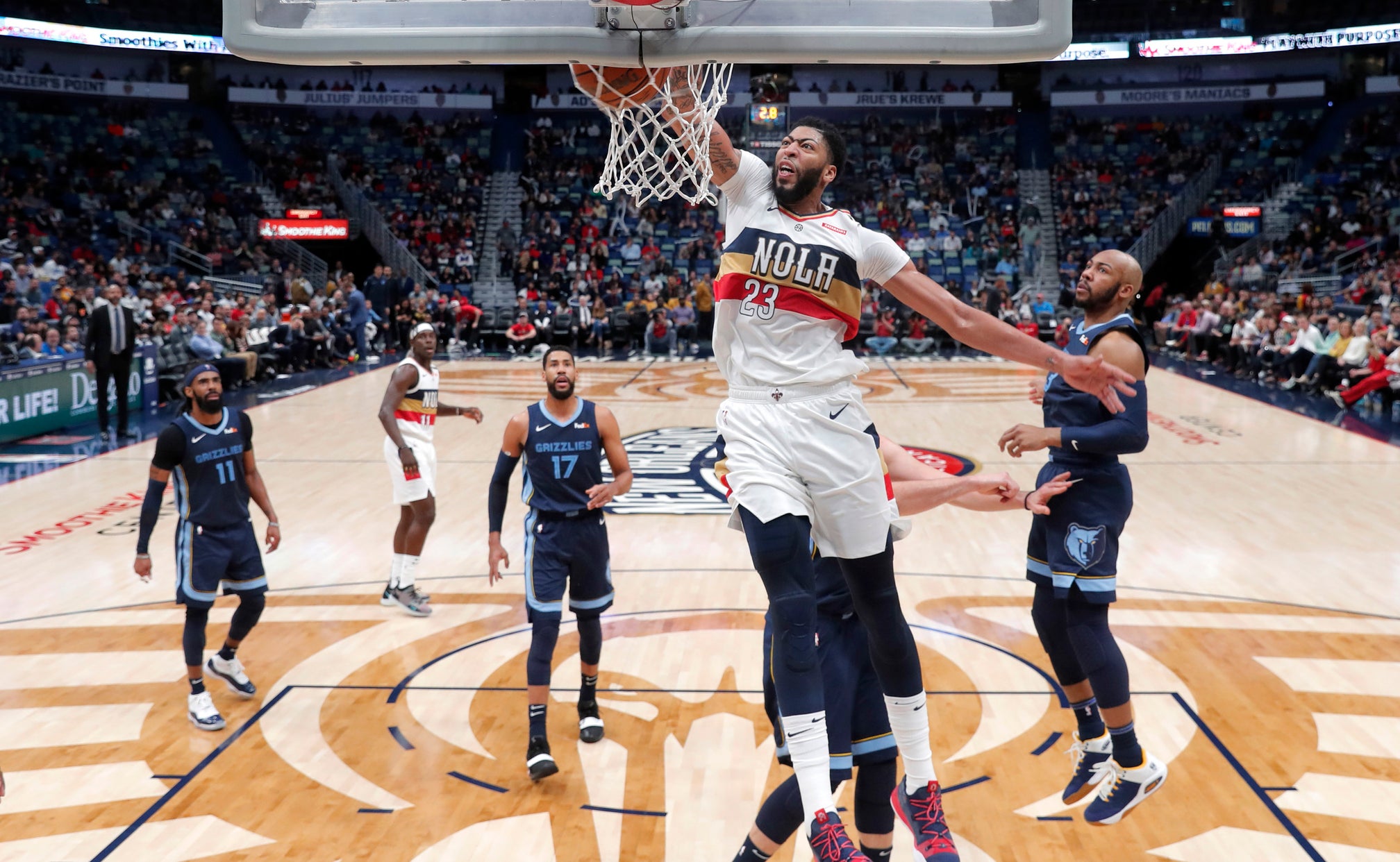 NEW ORLEANS (AP) — Anthony Davis had little to say about his latest dunk-filled scoring outburst. He even shrugged off his seldom-seen "Shammgod" crossover dribble that stunned the Grizzlies, delighted the crowd and set up his thunderous driving dunk.

The Pelicans' perennial All-Star was more eager to highlight an improved defensive performance that has given the Pelicans hope of stringing some victories together before the season gets away from them.

Davis had 36 points, 13 rebounds and three blocked shots, and New Orleans pulled away for a 114-95 victory over reeling Memphis on Monday night.

"That's how we were able to be successful last year, by playing defense," Davis said. "It leads us to get a lot of transition points, fast-break points and easy buckets, gets guys wide-open 3s and stuff like that."

Mike Conley had 22 points and 10 assists for Memphis, but that was not nearly enough to stem what is now a six-game slide.

Second-year pro Frank Jackson scored a career-high 17 points for New Orleans, which has won two straight for the first time since winning three in a row in mid-November.

New Orleans' latest victories have come against struggling teams in Memphis and Cleveland. But the Pelicans, who came in allowing 115.1 points per game and yielded 126 in a disheartening loss at Brooklyn last Wednesday, took a considerable measure of gratification from holding two straight foes under 100.

"It was a really good team win for us because I thought, defensively, the last two games, we've been really, really solid," Pelicans coach Alvin Gentry said.

New Orleans dominated inside, outscoring Memphis 70-42 in the paint and outrebounding the Grizzlies 40-36.

Still, most of the game was competitive. There were 11 lead changes and nine ties, and neither team led by more than six until Julius Randle's dunk gave New Orleans an eight-point lead with five minutes left in the third. That was the beginning of the end for Memphis, which has lost 13 of 16 after winning 15 of its first 24 games.

"Things aren't going our way and teams are doing a good job of taking away what we are trying to do, so we have to figure out ways to play out of that," said Memphis center Marc Gasol, who was held to seven points on 3-of-10 shooting. "Our confidence is really fragile and when something bad happens, especially in the second half, we kind of panic and a six- or eight-point deficit goes to 16. ... Everyone is giving their effort, but now we also have to put discipline and everything into it and help your brothers out."

Grizzlies: Justin Holiday, who is Pelicans guard Jrue Holiday's younger brother, played in his second game for Memphis since being acquired from Chicago on Jan. 3. He scored four points — all on free throws — in 12:21 off the bench. ... Memphis turned the ball over 18 times, leading to 23 Pelicans points.

Pelicans: Davis has at least 20 points and 10 rebounds in 11 straight. ... Wing player E'Twaun Moore was ruled out with bruised left thigh. ... Forward Nikola Mirotic missed his 12th straight game because of a right ankle injury, but Gentry said Mirotic could return soon.

His thunderous jam on a feed from Jahlil Okafor along the baseline gave New Orleans the first double-digit lead in the game for either team at 76-66 late in the third quarter.

His last dunk came after he received an underhanded, no-look pass from Holiday as he cut down the lane. That made it 107-85 with a little more than three minutes left, and Davis checked out for good moments later.

As for his "Shammgod" dribble, Davis said, "I've got a lot of stuff in my bag. I just don't pull it out often."

Jackson's fast-break layup late in the third quarter capped a 10-point outburst in a less than three-minute span that included two 3s and a reverse layup, putting the Pelicans up 83-71. The spurt highlighted a promising performance for Jackson, who missed his entire rookie season with an injury and is eager see if he can give the Pelicans more of the bench scoring they've needed.

"We're half-way through the season now," Jackson said. "This is my first year and I think for sure it's slowed down a ton for me."