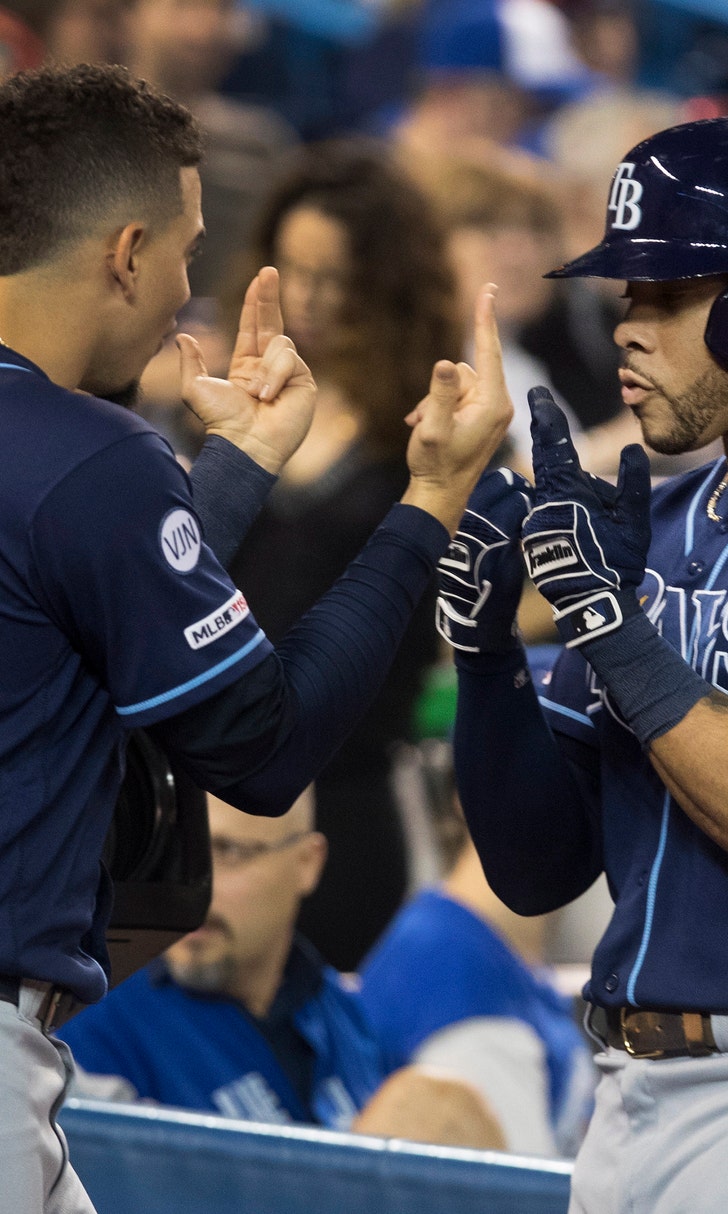 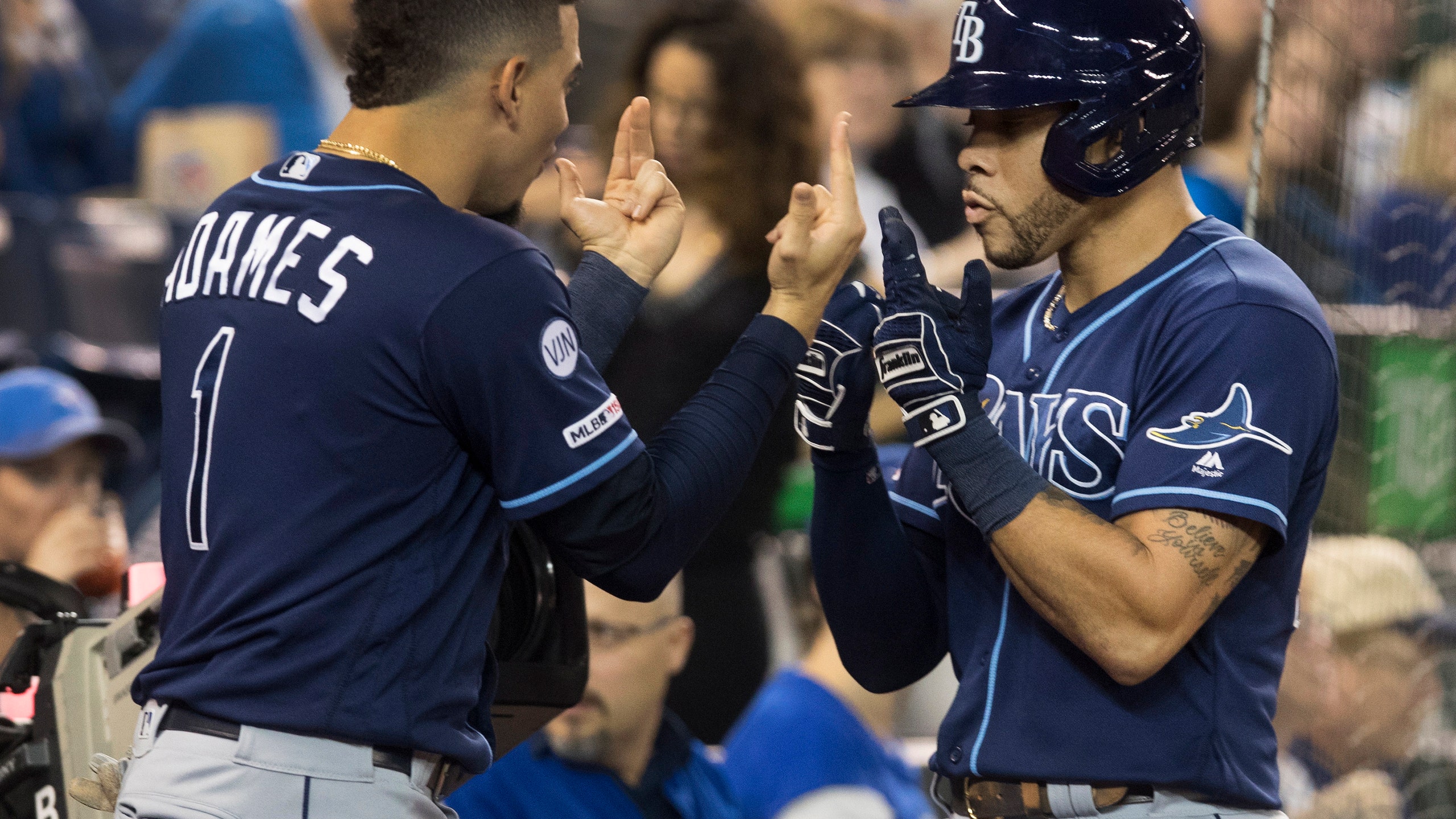 TORONTO (AP) — The Tampa Bay Rays returned to the playoffs for the first time since 2013, clinching an AL wild card berth with a 6-2 win over the Toronto Blue Jays on Friday night behind Tommy Pham's two-run homer and 4 1/3 hitless innings from Tyler Glasnow.

Tampa Bay will play Oakland in the wild-card game on Wednesday night. The Rays will start Charlie Morton. Both teams were 96-64 going into the final two games, with home field still underdetermined. The A's won the season series 4-3 and hold the tiebreaker.

At 96-64, the low-budget Rays have their most wins since 2010 and can tie the team record of 97 set in 2008, when they won their only AL pennant and lost to Philadelphia in the World Series.

Tampa Bay began the night with a magic number of two to clinch, and Cleveland lost 8-2 at Washington while the Rays were in the eighth inning.

Jubilant players poured out of Tampa Bay's dugout for a celebration around the mound after right-hander Emilio Pagan retired Reese McGuire to end it.

Austin Meadows also homered for the Rays, hitting his 33rd this season off Ryan Dull in the ninth.

KANSAS CITY, Mo. (AP) —Minnesota became the record fourth team in the major leagues to win 100 games this season, beating Kansas City behind two-run homers from Miguel Sanó and Ryan LaMarre in a game shortened to 6½ innings because of rain.

Minnesota reached the century mark in wins for just the second time in franchise history. The 1965 Twins went 102-60, then lost the World Series to the Los Angeles Dodgers in seven games.

WASHINGTON (AP) —Cleveland will miss out on the postseason for the first time since 2015, eliminated from the AL wild-card race in a loss to the playoff-bound Washington.

Gerardo Parra had four RBIs to lead the Nationals to their sixth straight win. The Indians have lost three straight, totaling just two runs and seven hits in the last two, and their loss clinched a wild-card berth for Oakland.

Parra broke a 2-all tie for Washington with a sacrifice fly in the sixth off Nick Goody (3-2), and Asdrúbal Cabrera followed with a double that added two more runs.

Parra also hit two-run double off Zach Plesac in the second, and a solo homer off Dan Otero in the eighth.

The Indians' runs came on an RBI double by Ryan Flaherty and a sacrifice fly by Francisco Lindor against Austin Voth (2-1), who went six innings.

DENVER (AP) — Ryan Braun exited early with calf trouble and Milwaukee's push for the NL Central title took a hit in a loss to Colorado that ended the Brewers' seven-game winning streak.

The Brewers remained a game behind St. Louis, which lost to the Cubs 8-2, for the division lead. Milwaukee dropped two games in back of Washington for the top NL wild-card spot with two games left.

Braun hit an RBI single in the first inning and played left field in the bottom half. He was pulled in the second.

ST. LOUIS (AP) — Andrew Miller and Ryan Helsley were hit hard as St. Louis' bullpen stumbled in a loss to Chicago, yet the Cardinals' magic number for clinching the NL Central dropped to two.

Miller (5-6), Helsley and Giovanny Gallegos allowed each of Chicago's runs after Dakota Hudson struck out 10 in five scoreless innings.

The Cardinals (90-70) lost their third consecutive game after winning six in a row. Their magic number for clinching their first division title since 2015 was sliced to two when second-place Milwaukee lost 11-7 at Colorado.

Ian Happ and Robel Garcia homered for Chicago (83-77), which had lost nine in a row. The Cubs were swept in a four-game series against the Cardinals last weekend.

Rookie José Urquidy (2-1) pitched six innings of three-hit ball and Will Harris threw an immaculate inning of relief in the 10th win in 12 games for Houston (105-55), which extended its franchise record for victories.

Houston will face either Tampa Bay or Oakland, who play Wednesday night in the AL wild-card game, in the Division Series.

The AL West champion Astros clinched home field in a potential ALCS against the Yankees (103-57). The Astros also stayed at least one game ahead of the Dodgers, who have clinched the NL's best record.

The Angels (72-88) managed just three singles and didn't get a runner to second base in their 11th shutout loss.

Patrick Sandoval (0-4) finished his rookie season winless for the Angels.

Alonso connected in the first inning against Dallas Keuchel, narrowly clearing the wall in left field for a solo shot that tied Judge's mark from his breakout season with the New York Yankees in 2017.

Braves star Freddie Freeman returned to the lineup and went 0 for 5 after taking four days off to rest his sore right elbow.

Keuchel (8-8) allowed four runs over five innings in his final postseason tuneup. The left-hander was pulled after 98 pitches.

Wojciechowski (4-8) struck out six as the Orioles took the opener of the season-ending, three-game series for both clubs.

Núñez's three-run shot to left in the third off of Nathan Eovaldi (2-1) was just about all the scoring the Orioles needed. It was the 30th homer of the season for Núñez, who added an RBI single in the ninth and drove in all four of Baltimore's runs.

Xander Bogaerts broke up the shutout with a single up the middle, scoring Rafael Devers, who led off the ninth with a double off Richard Bleier.

PITTSBURGH (AP) — Kevin Newman hit a two-run homer with two out in the ninth inning to give Pittsburgh a win over Cincinnati.

Jake Elmore set up Newman's game-ending swing with a leadoff single against Raisel Iglesias (3-12). Newman, who also hit a three-run homer in the fifth, hit a drive into the bleachers in left for his 12th homer.

It was Iglesias' sixth blown save opportunity. Yacksel Rios (1-0) worked a scoreless inning for his fifth career victory.

ARLINGTON, Texas (AP) — James Paxton was removed from his final start before the playoffs after one inning because of a tight muscle in his buttocks, overshadowing six home runs by the Yankees in a victory over Texas.

New York reached 103 wins for the first time in a decade.

Rookie Joe Palumbo (0-3) allowed three homers and struck out seven in three-plus innings as the Rangers lost for the 10th time in 12 games.

Bryce Harper doubled, tripled and drove in a pair of runs for the Phillies, who snapped a six-game losing streak while improving to 8-9 against the Marlins this season.

Harold Ramirez homered and Rojas had four hits for Miami.

It was Lamb's fourth career pinch-hit homer, and this one was a no-doubter, launched deep into the seats in right-center field.

Arizona trailed 3-2 going into the eighth inning, but pinch-runner Jarrod Dyson tied the game when he scored on an infield chopper, just beating the throw by San Diego's Manny Machado. Dyson was originally ruled out, but the call was reversed by the umpires after a video review.

Lamb came up next and put the game out of reach with his sixth homer of the season. He entered the game hitting just .186.

Luis Perdomo (2-4) took the loss after giving up four runs in the eighth. Robby Scott (1-0) pitched an inning of scoreless relief for the win. Archie Bradley earned 18th save.

SEATTLE (AP) —Oakland wrapped up a playoff spot before the first pitch, then missed a chance to move closer to hosting next week's AL wild-card game when closer Liam Hendriks gave up two runs in the ninth inning of a loss to Seattle.

The A's are tied with Tampa Bay for the two wild-card slots at 96-64 — if they wind up even, Oakland would host the Rays on Wednesday night.

The Athletics sealed their postseason berth when Cleveland lost to Washington. Many of the A's exchanged a brief set of hugs and high fives in the dugout after the Indians loss went final.

Shed Long's two-out RBI single scored Mallex Smith with the tying run and J.P. Crawford followed with an RBI double to win it for the Mariners.

Hendriks (4-4) blew his seventh save of the season.

Bellinger's leadoff homer in the second off Johnny Cueto (1-2) started a five-run inning in which the Dodgers sent nine men to the plate.

Cueto allowed five runs on five hits, including three home runs in two innings in his fourth — and shortest — start since coming back on Sept. 10 from a 13-month absence while recovering Tommy John surgery.