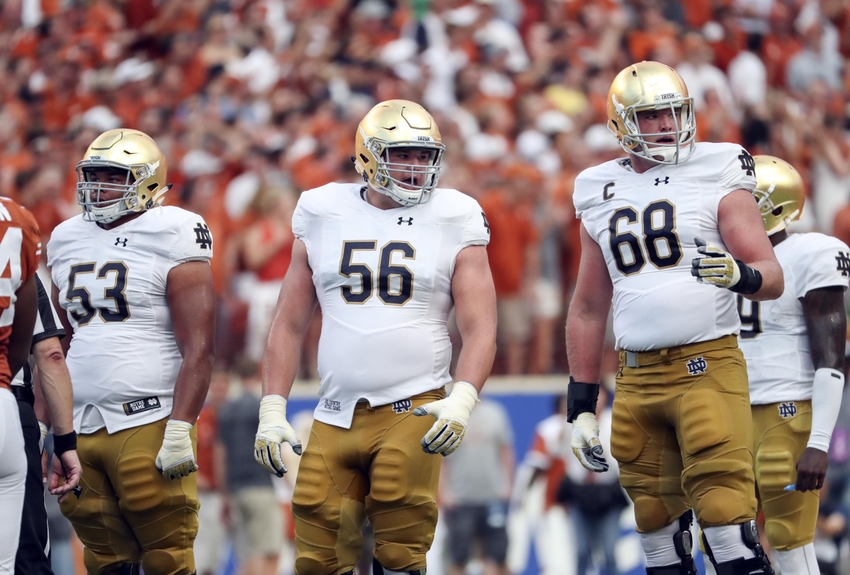 Notre Dame’s Quenton Nelson is one of the more physical prospect eligible for the 2017 NFL Draft.

Quenton Nelson is a thick and powerful offensive line prospect. He’s the true definition of a road-grader thanks to his ability to move defenders off the line of scrimmage. Nelson is a perfect fit for a team looking to feature a power running game.

His dominance as a run blocker starts with his low pad level which he uses to help him roll his hips and deliver a jolt. That initial jolt is more effective because Nelson is committed to gaining inside hands. He then velcros to this target and generates a push.

Nelson’s heavy hands make it difficult for the defender to disengage and help him control the action. This is also a nasty player who plays to the whistle and wants to deliver punishment.

For his size, Nelson does a good job working off the initial block and climbing to the second level. He reaches linebackers under control and balanced. This helps him ensure that he doesn’t miss blocks or allow the linebacker to streak past him.

His pass protection could use some work, but he has an elite anchor. He is able to absorb contact, hold his ground and keep pressure out of the quarterbacks face.

The area where he needs some work is protecting the gaps. Nelson doesn’t have great lateral quickness which makes him susceptible to quicker pass rushers. Some of these issues are related to his less than ideal awareness.

There are times where Nelson doesn’t immediately identify the most immediate pass rush threat. This leads to a clear path to the quarterback from time to time.

The small issues in pass protection are correctable through coaching and Nelson keeping his head on a swivel. He’ll maintain a high draft status based on his raw power, size and nastiness. There are plenty of teams in the NFL that covet his ability to move defenders off the line of scrimmage.