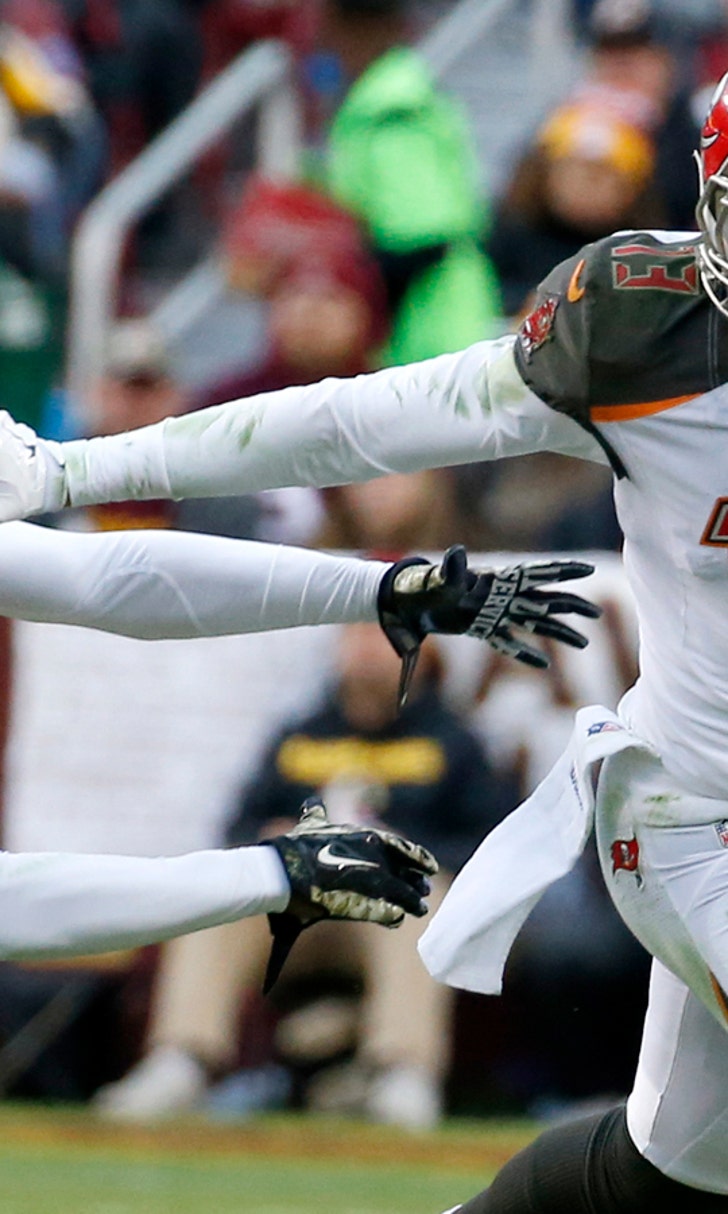 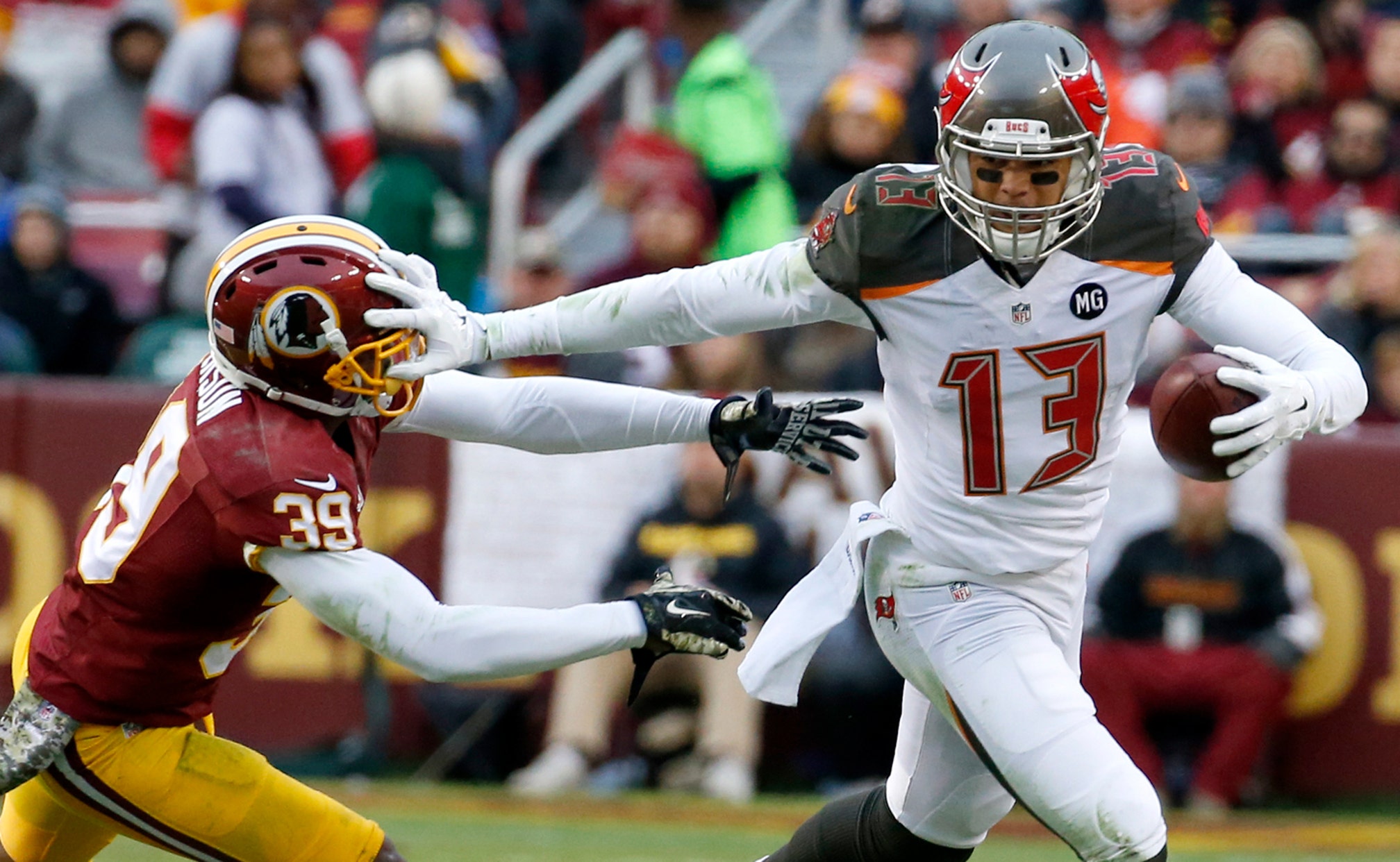 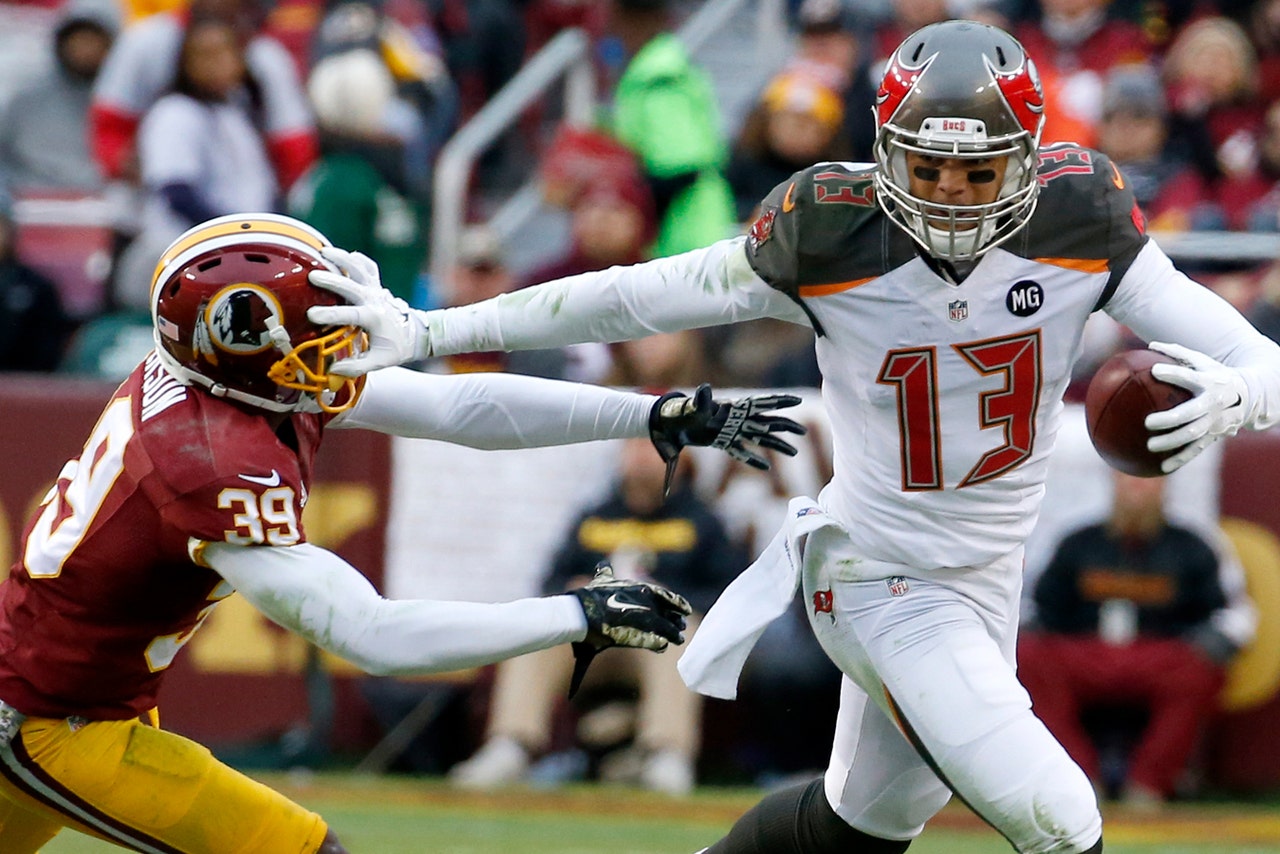 TAMPA, Fla. -- Once, there were cries for Johnny Football. Now, there should be calls for more Mike Touchdown.

Once, there were appeals for the Tampa Bay Buccaneers to pick one Texas A&M star with the seventh overall selection. Now, there should be sighs of relief that they chose another.

Can you imagine this Bucs life without Mike Evans?

Can you imagine if Lovie Smith and Jason Licht tapped Johnny Manziel on that fateful night in May instead of making Evans the first draft pick of Tampa Bay's new era, with yards upon yards and parallels to Randy Moss to come?

Hat tip to you, Coach.

"We had a list of players that we liked," Smith said Monday, a day after Evans ripped the Washington Redskins for a career-high 209 yards and two touchdowns on seven catches to help the Bucs improve to 2-8. "But we were unanimous in what we thought Mike Evans would do for our football team. And he hasn't disappointed us at all."

But here's what Evans has gifted in nine games: Cold, hard results.

So, Mike, do games like Sunday's make you feel validated?

Look, the Bucs need a quarterback. They can't pretend that a 35-year-old Josh McCown is the answer beyond this fall, and Mike Glennon has been average in 19 appearances throughout the past two seasons. Quarterback remains an area of need.

But hindsight is a funny animal. The number of swank pool parties that Manziel attended in the offseason is greater than the amount of regular-season passes he has thrown for the Cleveland Browns.

Evans, meanwhile, served the role of a meat cleaver against the Browns, Atlanta Falcons and Redskins in the past three weeks. He diced defenders on his way to becoming the frontrunner of a talented rookie receiver class.

Now picture Manziel, behind a bad offensive line, floundering in a system without its assumed coordinator. It's likely that his rookie year in pewter and red would have been a five-alarm disaster.

Manziel's confidence, so central to his success, would have turned to goo. Next year would have become a season-long effort to rehabilitate his momentum, perhaps with a new coordinator's system to learn.

There would have been intense scrutiny from national media, with satellite trucks popping up alongside the bushes at One Buc Place. The Bucs would have been questioned about their ability to develop a franchise face. Outside voices would have demanded more, more, more as the losses mounted.

Once, Johnny Football looked like the no-brainer pick to make the Bucs tick. Turns out, the right Texas A&M player was selected after all.

"He's still a rookie," Smith said of Evans. "For the most part, he doesn't sit in first class. He's back with the rest of the rookies somewhere back on the plane and just earning his stripes with our football team. So I think as you go back to his video at Texas A&M with Kevin Sumlin coaching him, you'll see some of the same things."

That's what the Bucs hoped for when they secured Evans. They wanted a playmaker. They wanted his 6-foot-5, 231-pound frame to be a sight to be respected. They wanted him to become a weapon to stretch defenses and make their attack more complex.

Mission accomplished so far. Remember when the Bucs' receiving corps consisted of Vincent Jackson and little else?

Last year, Jackson finished with 1,224 yards receiving and seven touchdowns. Tim Wright was a distant second at 571 yards and five touchdowns. Outside of Jackson, there was little reason to respect what the Bucs fielded as pass-catching options.

"It's just making the play," Evans said. "I just hope to continue to make plays. That's all I can do."

Yes, it's wise to remember that rookie-year flashes can prove fleeting. Look no further than Doug Martin's 1,454 rushing yards in 2012 as proof of how hard it can be to sustain early momentum.

Doing so requires health luck, and it takes help from complementary parts as well. Time will show if Evans can be a dynamic player for years to come. There are no guarantees.

Evans over Manziel was the correct choice. Who knew?

Smith and Licht, to start.

Antonio Brown Reunites With Tom Brady
After serving an eight game suspension, Antonio Brown is headed to Tampa Bay. But will things work for Brady & Co.?
13 hours ago

Not The Same Old Browns
As he makes his picks for Week 7, Jason McIntyre has a word of caution: Beware first impressions, especially with Cleveland.
16 hours ago

The Carson Wentz Conundrum
Eagles quarterback Carson Wentz can both frustrate and amaze. Is he the key to Philly's success or officially an impediment?
18 hours ago
those were the latest stories
Want to see more?
View All Stories
Fox Sports™ and © 2020 Fox Media LLC and Fox Sports Interactive Media, LLC. All rights reserved. Use of this website (including any and all parts and components) constitutes your acceptance of these Terms of Use and Updated Privacy Policy. Advertising Choices. Do Not Sell my Personal Info