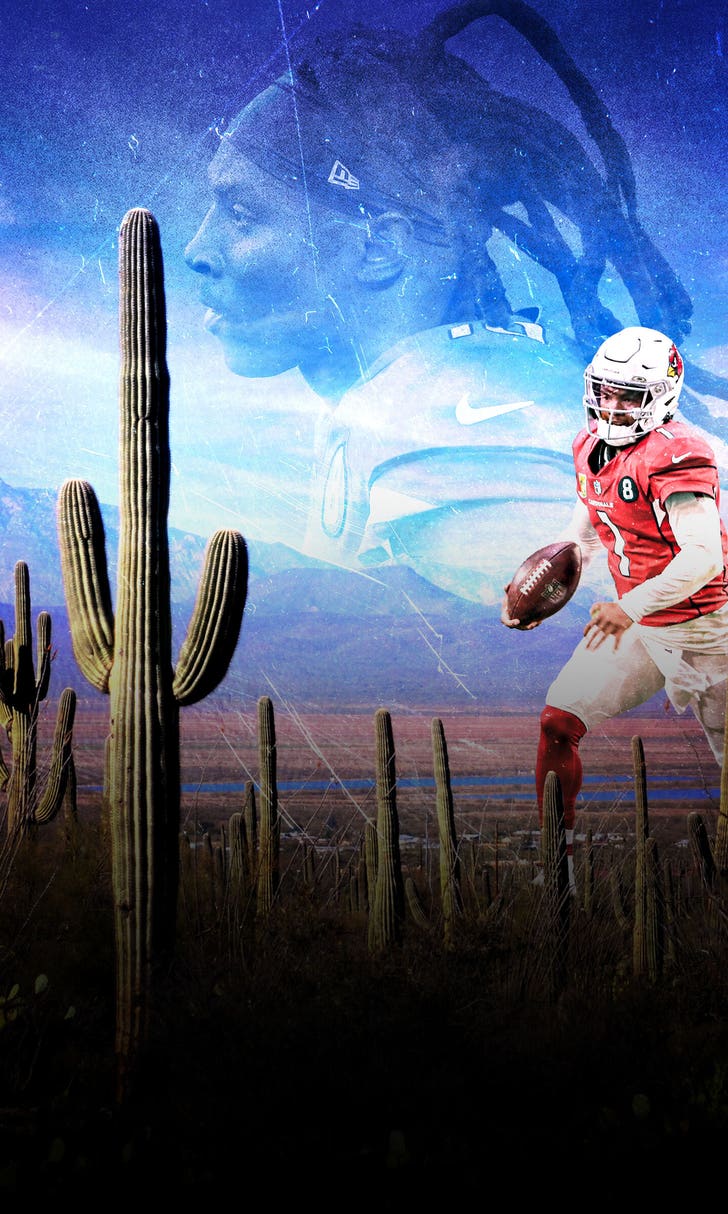 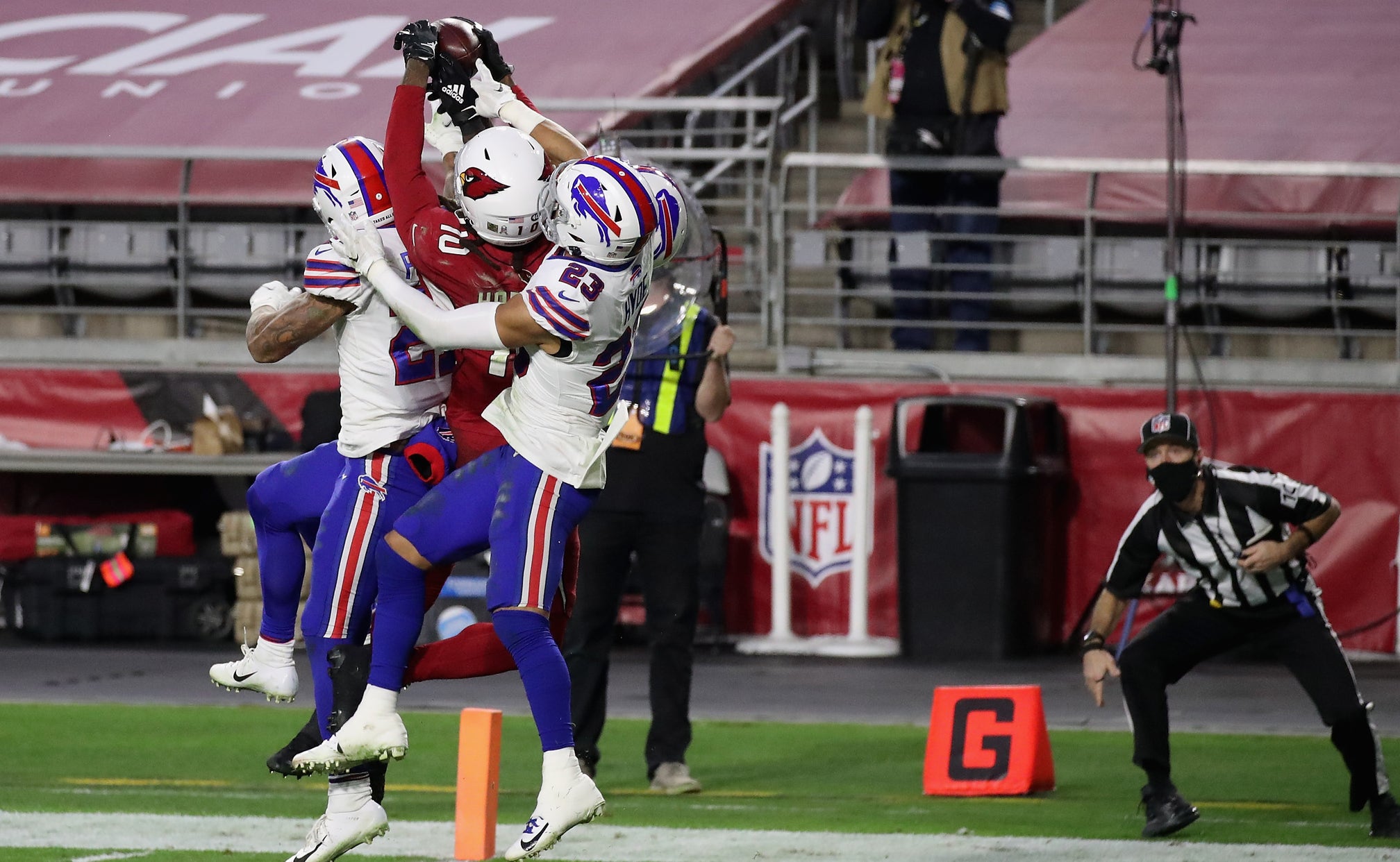 Week 10 gave us the most memorable play of the season thus far, and the cruelest gambling moment of 2020.

We have a new leader in the incredibly tight NFC West. The Dolphins won their fifth in a row and are just a half-game out in the AFC East. And I'm still recovering from the end of the game in Cleveland.

Let's review what we learned Sunday:

The NFC West gets wilder

The NFL is a unique sport for countless reasons, including the ability to flip playoff standings with a single play. The Cardinals outplayed the Buffalo Bills on Sunday, but Arizona was still losing by four with 11 seconds left.

The Cards had the ball at the Bills' 43, where Kyler Murray took the snap, rolled out to his left, somehow avoided a sack, squared up his shoulders and let loose with his right arm. Standing 50 yards away in the end zone was DeAndre Hopkins, surrounded by three defenders. All four of them leaped for the "Hail Mary" pass coming right for Hopkins.

A former basketball player at Clemson, the 6-foot-1 Hopkins outjumped the three Bills and hauled in a miraculous game-winning catch. It was one of the best catches I can recall.

And with the Cardinals (6-3) securing the victory -- but not covering as they took a knee instead of attempting the point after -- Arizona jumped all the way from the bottom of the playoff standings to the top of the NFC West, ending Week 10 in the No. 2 overall spot in the conference.

The Cardinals' stunning victory and Seattle's loss to the Rams moved the Seahawks (6-3) -- who started 5-0 -- down to the seventh seed, the final playoff spot in this first season of expanded NFL playoffs. After dropping their third game in their last four outings, is it time to worry about the Seahawks? Yes, it’s time.

Russell Wilson started the season on fire and was the MVP leader at the quarter-pole. Then the last four games happened.

Through the first five weeks, Wilson had 19 touchdown passes and just three interceptions. In the Seahawks' last four games, Wilson has 10 turnovers, including seven picks.

Not all turnovers are created equal, but Wilson has made some awful decisions leading to those interceptions. Sunday was no different. Wilson had the opportunity to run for a first down and possibly score from the 25-yard line late in the second quarter. Instead, he threw across his body, resulting in an interception into double coverage. Yikes! There’s no excuses for these plays.

Is Wilson trying to do too much because his defense is poor? Yes, that’s possible. Does he not trust his offense because running back Chris Carson has been out? Also possible. But for whatever the reason, Wilson has to stop hurting his team because Seattle's only hopes of contending for a Super Bowl rest with him.

The Seahawks defense has allowed the most yards in the league, and whether fair or not, Wilson can’t have unforced errors. It’s not complementary football, but it’s the only way Seattle can win.

Even with the NFC West currently occupying three of the seven playoff spots, I don’t feel great about any of these teams. The Rams are also 6-3 and finally got a win against a quality opponent, but it wasn’t that convincing. The Seahawks defense is a hot mess, and Los Angeles only managed 23 points. They missed another extra point. They had a bad fumble. If Jared Goff is under any pressure, he can’t function, and now the Rams appear to have lost left tackle Andrew Whitworth for an extended time.

Arizona is a fascinating team. Kyler Murray is outstanding. The Cardinals run the ball well. But I don’t quite trust coach Kliff Kingsbury. They have many moments when the offense looks very disjointed, but Murray ends up bailing them out. That’s a tough recipe for playoff success.

Kingsbury also makes questionable decisions in late games. Injuries have hurt the Cardinals defense, and they’ve now allowed at least 30 points in three straight games. This Thursday night in Seattle (8 p.m. ET, FOX), where Arizona travels on the short week, will tell us more about both teams.

Can the Seahawks bounce back? If the Cardinals beat Seattle again, I’ll have to buy in.

Are the streaking Dolphins legit?

But ... what I’m not buying is this team being a contender this season. The Dolphins have won five straight, including their last three with Tua under center. In their last three games, they’ve scored "five" touchdowns on defense or special teams. Five is in quotes because two drives started for the offense on the 1-yard line. The offense has added six other touchdowns.

That pace of scoring by the defense and special teams isn’t something that is sustainable to be a contender. Now, that doesn’t take away from how well the Dolphins are playing as a team, but they aren’t a team that should be considered dangerous to make a playoff run.

The most cruel gambling moment of 2020

The Browns opened as three-point favorites against the Texans on Sunday. By kickoff, the line had moved out to Cleveland by 4.5. The Browns were leading the Texans 10-0 with seven minutes left in the game. As the score indicates, this game was ugly. The Texans hadn’t moved the ball all day, but they found a way to put together one late drive to score a TD with five minutes left.

As someone who wagered on the Browns, I was dejected. Another lost bet. The Browns would just run out the clock and get the win. And the Browns did that ... except on the final meaningful play of the game, Nick Chubb broke loose down the left sideline. Chubb needed just three yards on a third-down play from the Browns' 40 for a game-clinching first down. Chubb easily got that three yards and continued down the sidelines. He broke free. He was running all alone.

I slowly rose from the couch to cheer in pure ecstasy as Chubb cruised toward the goal line for a TD that would cover for the Browns. And just as fast as I rose off the couch, I sat back down in bewilderment.

Chubb ran out of bounds at the 1-yard line. He did not score. Cleveland took a knee on the next play, and the game was over. Just brutal. And what made the play different than most of these situations is Chubb ran for 53 yards after the first down without stopping. Then he just decided to stop. It was odd.

Enter the NFL Challenge on the FOX Bet Super 6 app for a chance at this week's $1 million jackpot.

Burrow's Road To Return
What did Joe Burrow's surgery entail? What will rehab look like? Dr. Matt Provencher answers those injury questions and more.
9 mins ago