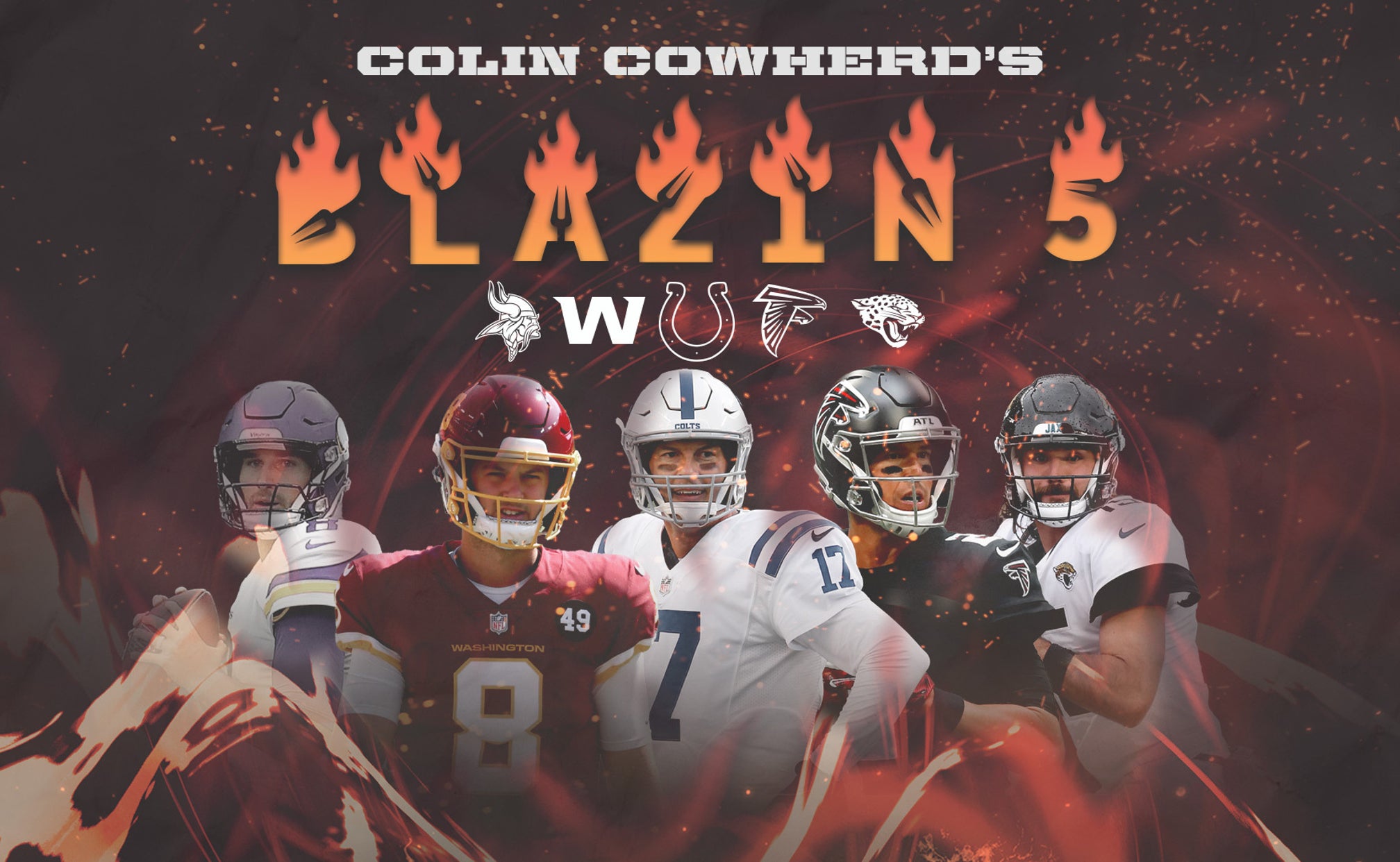 previous story
What You Need to Know: Clemson vs. Miami
next story
The Battle of Pennsylvania
National Football League

Despite some rescheduling, Sunday is still full of some salacious matchups, and Colin Cowherd is back with his latest Blazin' 5, where he gives his favorite picks against the spread ahead of NFL Sunday.

According to Colin, underdogs are the play, with all odds via FOX Bet.

This may be the final straw for Dan Quinn as the head coach of Atlanta (0-4), as the Falcons are still searching for their first win of the season.

But Colin likes that spot for them this weekend. 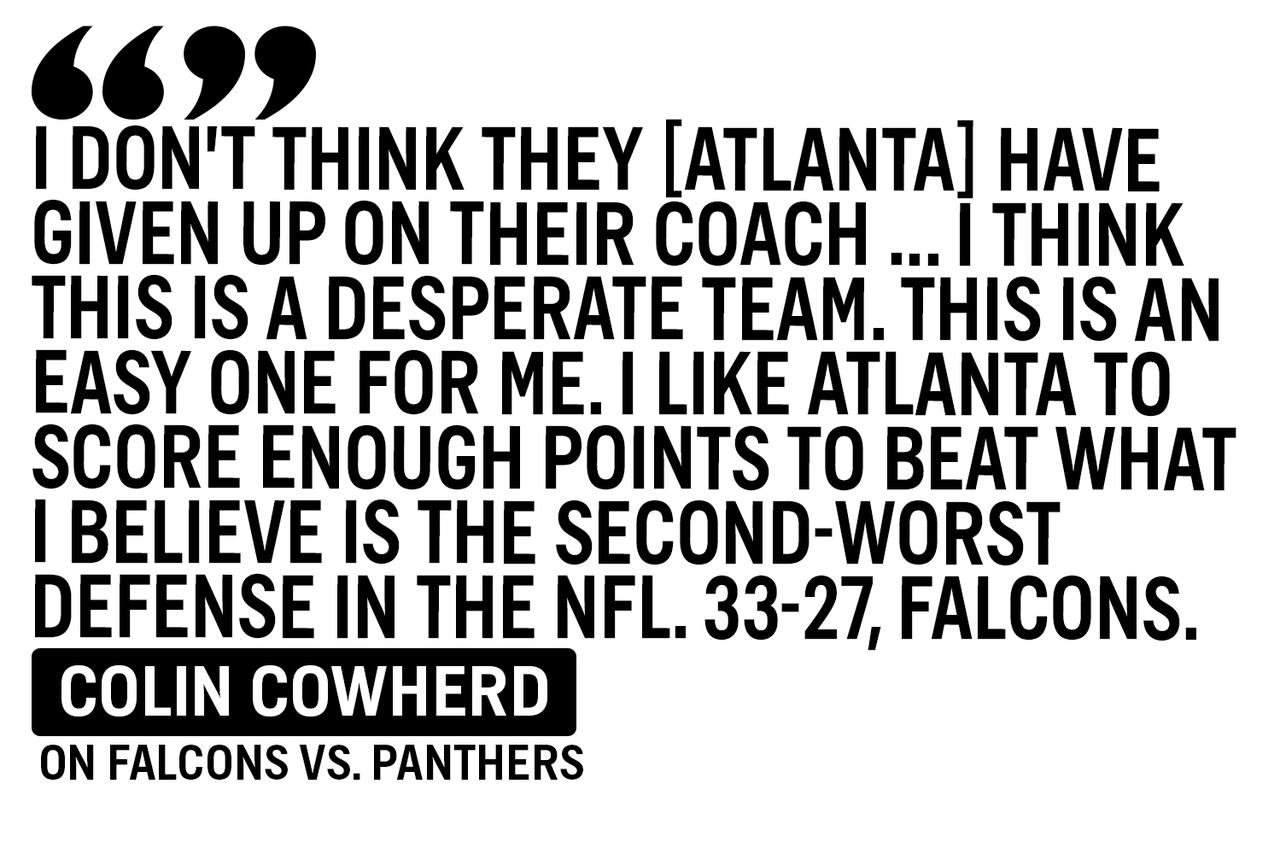 The Falcons boast an explosive offense, ranking fifth in the league with 294.3 passing yards per game, with receiver Calvin Ridley averaging 87.3 yards per game.

Meanwhile, Carolina's defense has some holes. They are ranked 31st on third down, allowing 52.1 percent of third downs to be completed, and they are second-worst when it comes to sacks (3).

The run defense is struggling, giving up seven rushing touchdowns this season, good for second-most in the league.

Atlanta has dominated the series all-time, 32-18, and the Panthers haven't won the matchup since 2014.

The Texans have lost each of their first four games for the first time since 2008, and they are in sole possession of last place in the AFC South.

On Monday, the team fired coach and general manager Bill O'Brien, but they have much more to fix heading into Sunday. Houston holds the NFL's worst run defense, allowing 181.8 yards per game, and the franchise has yet to force a turnover.

Colin is picking Jacksonville to score the upset. 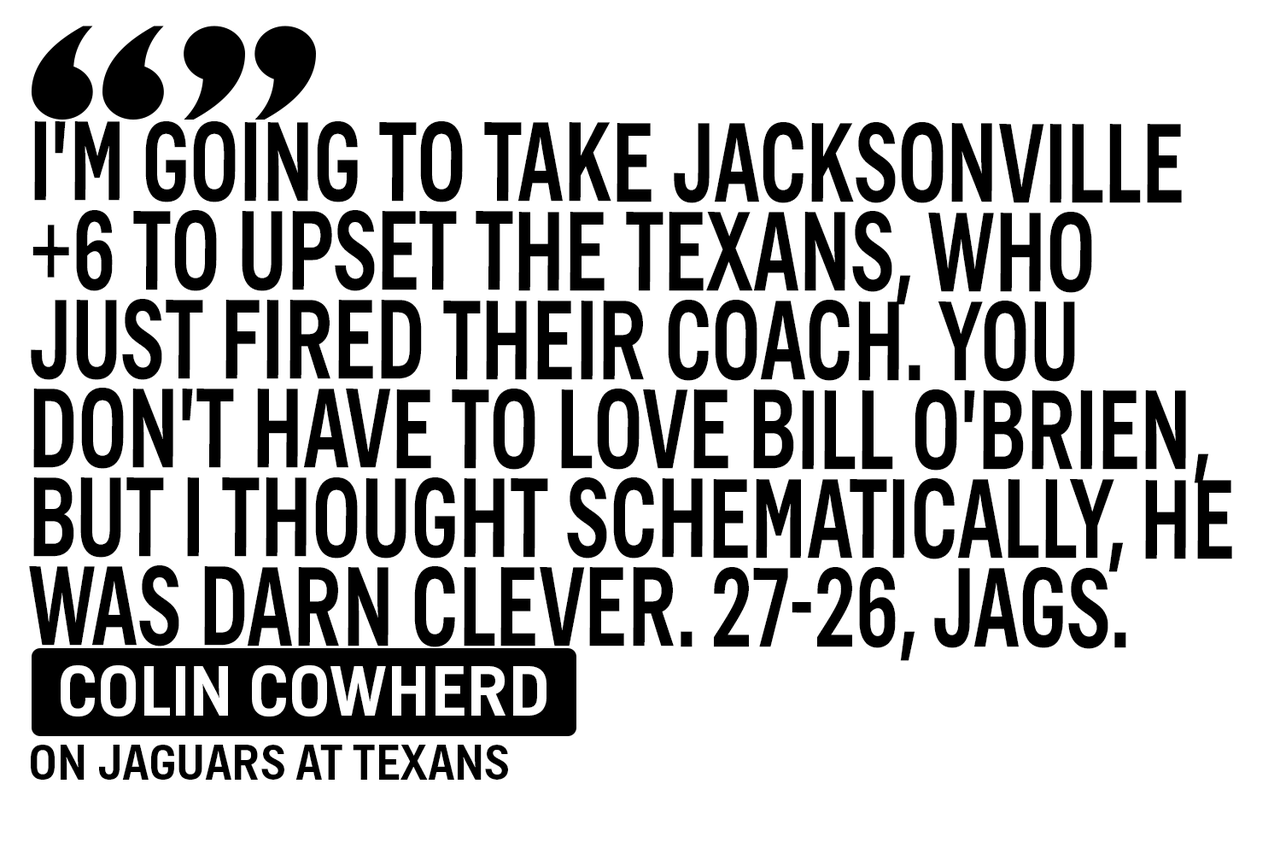 A stat to note: teams that fired their coach are 2-6 against the spread the following week.

Washington (1-3) is only a half-game back in the NFC East.

Kyle Allen was named the starting quarterback for the Washington Football Team heading into Week 5, and he may be able to provide a spark to the offense.

In the meantime, the newest starter under center will get some help from his defense. Washington’s defense is fourth in DVOA behind only the Colts, Steelers and Buccaneers, and their pass defense ranks third in DVOA in the league.

Colin believes the defensive side of the ball will be the key to success for Washington. 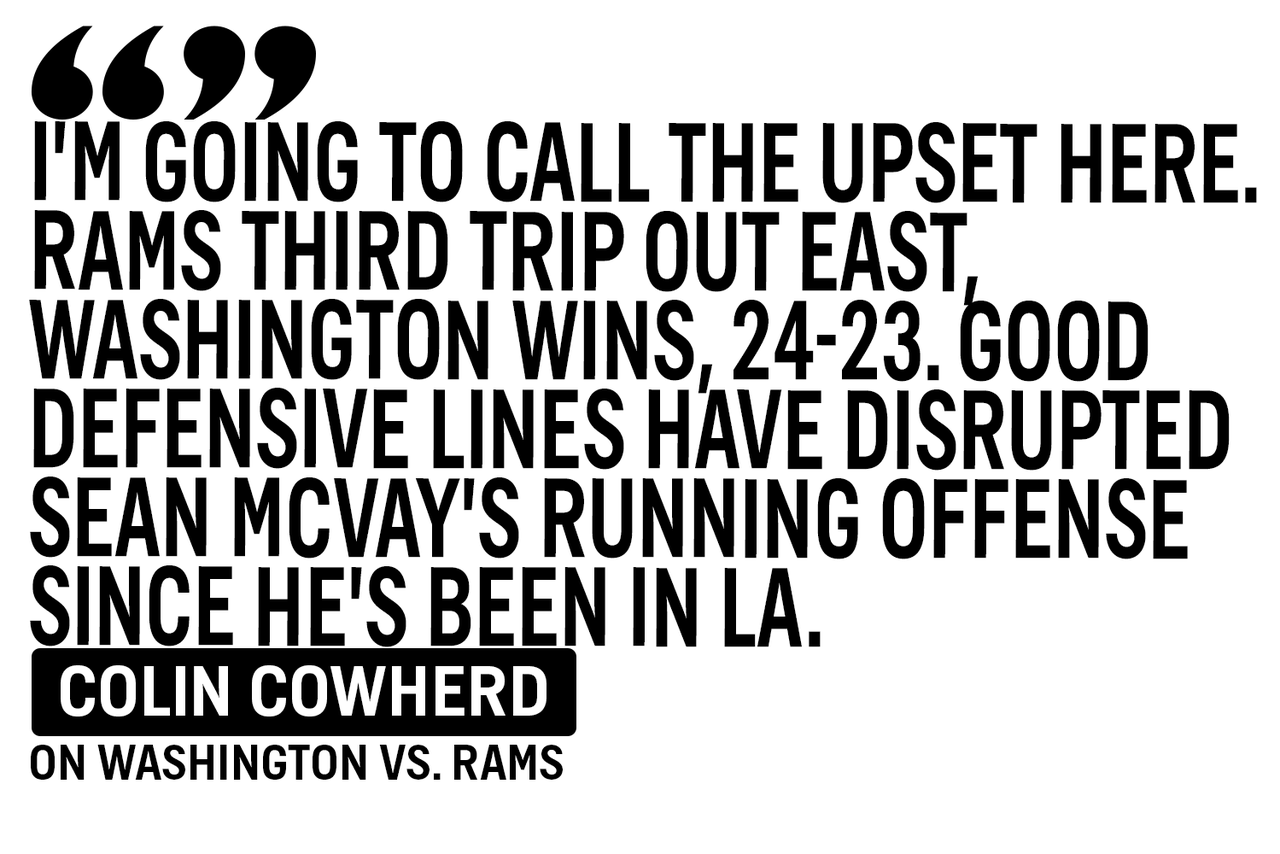 Washington ranks fourth against the pass, allowing 208.5 yards per game.

And the pass rush will benefit from rookie Chase Young returning to the lineup, who totaled eight tackles and 2.5 sacks before sustaining a groin injury in Washington's Week 3 loss to the Browns.

Both of these teams are riding three-game winning streaks since dropping their Week 1 opener.

Indy also boasts 10 sacks on the season, while only allowing opposing defenses to take their quarterback, Philip Rivers, down four times.

Rivers has a 72.7 completion percentage with just three interceptions through four games.

All these reasons lead Colin to believe Indianapolis is the real deal. 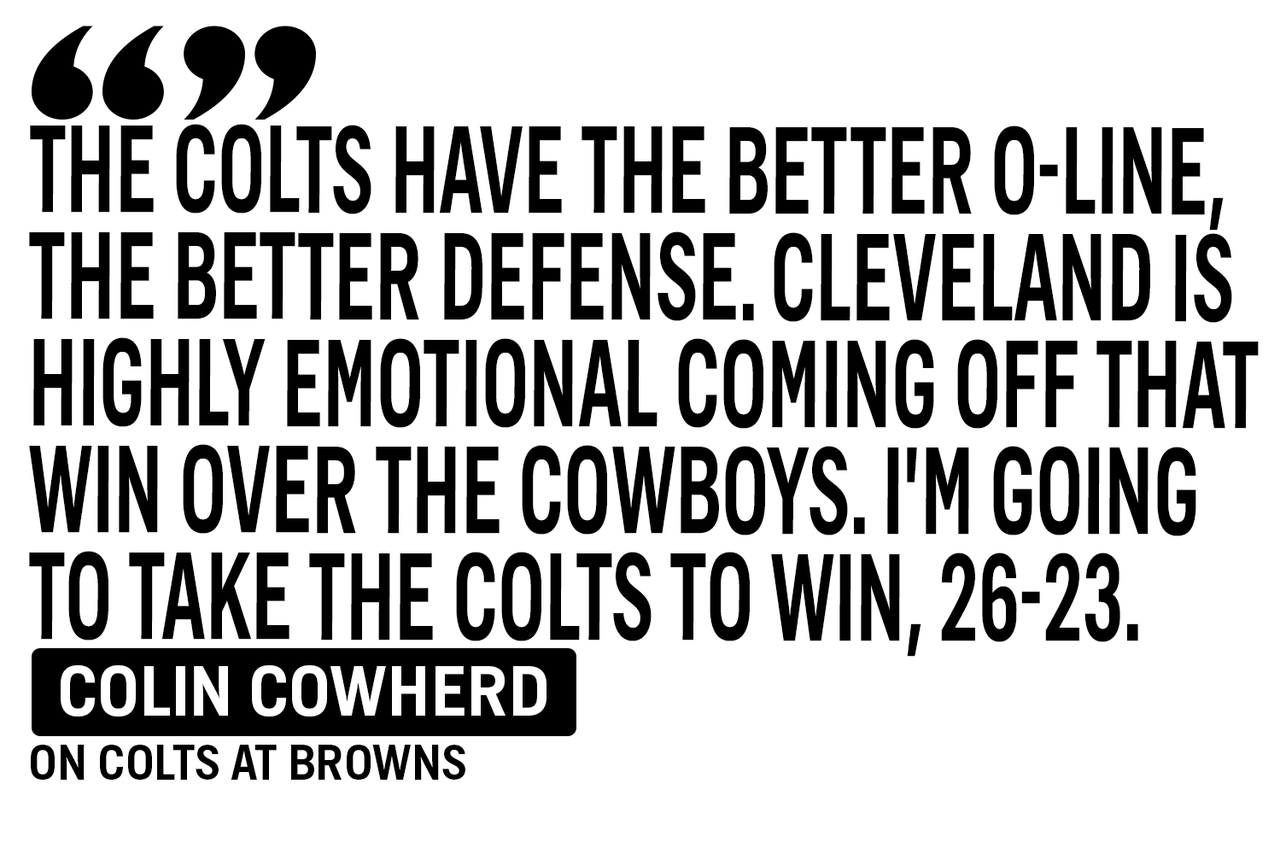 Remember, the Browns' wins come against teams with a combined record of 3-8-1.

It'll be a battle of cooks at CenturyLink Field on Sunday.

Minnesota Vikings running back Dalvin Cook leads the league in rushing yards (424), missed tackles forced (21), and yards after contact (269), while ranking first in DYAR and fifth in DVOA.

Cook isn't the only playmaker for Minnesota, as the trio of Cook, along with receivers Adam Theilen and Justin Jefferson, has amassed 778 yards from scrimmage over the last two games.

Colin argues that Minnesota's offense will be enough to cover the spread.