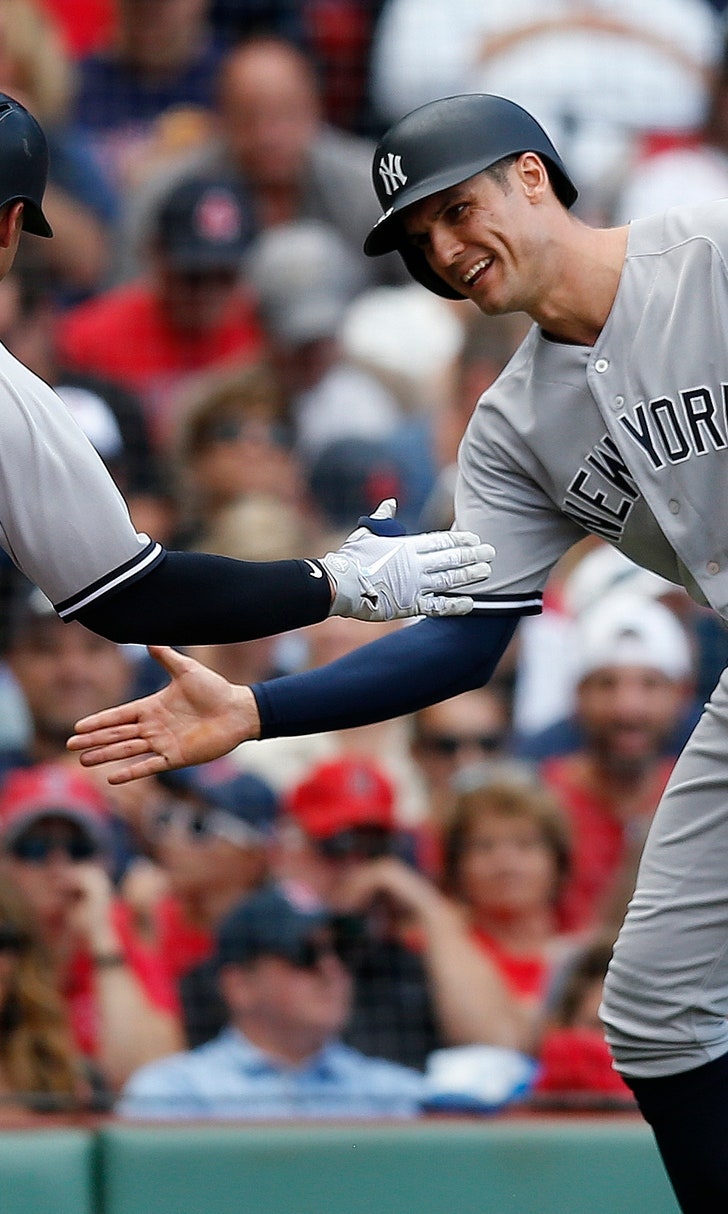 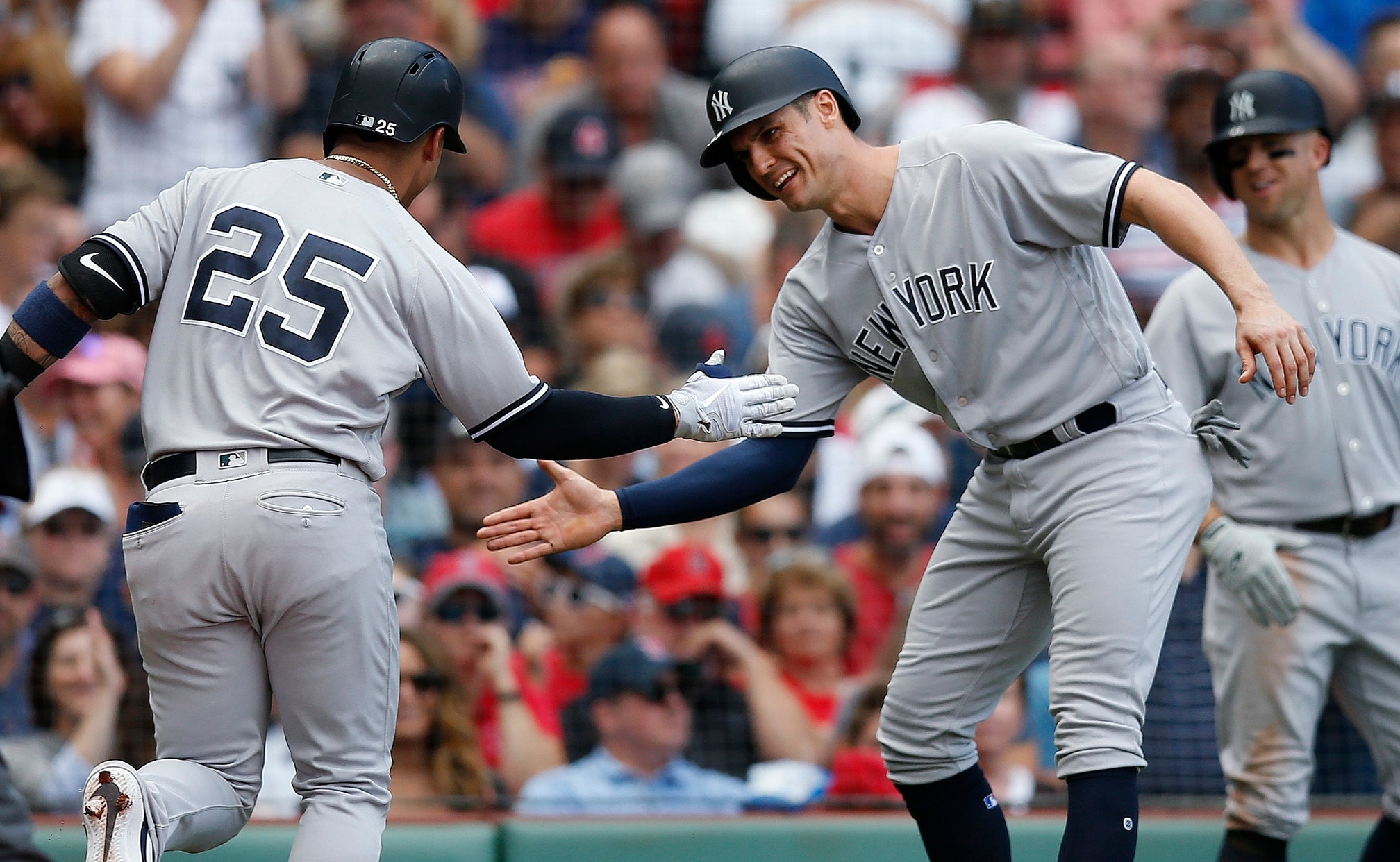 BOSTON (AP) — The Bronx Bombers lived up to their nickname by hitting another big number. A couple of them, in fact.

Gleyber Torres and Giancarlo Stanton connected as the playoff-bound Yankees set the major league record for most home runs in a season, beating the Boston Red Sox 8-5 Saturday for their 100th win this year.

"I'm happy for them. They work really hard at their craft, and it's a result of a lot of people having success," manager Aaron Boone said.

The Yankees entered Saturday tied with the 1997 Seattle Mariners — a lineup that included Ken Griffey Jr., Alex Rodriguez, Jay Buhner and Edgar Martinez — with 264 homers after hitting four Friday night in an 11-6 win over Boston.

Torres hit a two-run drive in the fourth inning that gave the Yankees the outright record, and Stanton added to it with his 38th of the season in the seventh.

"A lot of cool things happened for our team today, so it was a good day," said Stanton, who also had an RBI single in the first and reached 100 RBIs in his first season with New York.

The Yankees have one more chance to add to the record total Sunday as they try to complete a three-game series sweep against the AL East champion Red Sox, who they could meet again next week in the playoffs.

New York became the first team to get at least 20 home runs from all nine spots in the batting order.

"I didn't even know that until before the game, my meeting with the broadcast team," Boone said. "Actually, when Gleyber hit it, I was sharing all that information with all the guys on the bench because I felt like I had this new-found knowledge."

The Yankees, who will host Oakland in the AL wild-card game on Wednesday, improved to 100-61 — that still left them far behind the Red Sox, who have set a franchise record for victories in going 107-54.

This is the 10th time in big league history that a team has won at least 100 games and not finished first. Since the start of division play in 1969, the only clubs that didn't wind up on top despite triple-digits wins were Oakland in 2001 — which won 102 games to Seattle's 116 — San Francisco in 1993 and Baltimore in 1980.

The Yankees joined Boston and Houston to win 100 or more this season, making the AL the first league to have a trio of 100-win teams in the same year.

New York reached 100 wins for the 20th time in franchise history and first since going 103-59 in 2009, when the Yankees went on to win their most recent World Series title.

Brock Holt hit a two-run homer in the ninth for the Red Sox, who could be hosting the Yankees in the AL Division Series starting week. The wild-card winner opens its best-of-five matchup Friday at Fenway Park.

Manager Alex Cora, who has been shuffling the lineup and resting players for the playoffs, wasn't overly concerned after Saturday's loss.

"We're going to be 0-0 next week. We're still going to have four days off," Cora said. "It's not that we're going through the motions. We're taking care of our players and making sure they get what they need. We'll be ready for October."

Lance Lynn (10-10) got the win with three innings of relief, holding Boston to one run on two hits. Aroldis Chapman shut down Boston's ninth-inning rally for his 32nd save.

Eduardo Rodriguez (12-5) pitched the third and fourth for Boston and took the loss, allowing three runs on four hits.

After Greg Bird's RBI double put New York up 2-1 in the fourth, Torres hit a 1-1 pitch from Rodriguez out to right, sailing over the head of Blake Swihart at the bullpen wall and giving the Yankees the record-breaking 265th homer.

Andujar drove in two runs on a double during New York's three-run fifth and Stanton led off the seventh with a homer off Steven Wright.

Stanton pushed the homer record to 266 with a drive to left field, then got a surprise. A strong-armed fan sitting in the seats above the Green Monster threw the souvenir back, and the ball bounced into Stanton as he rounded second base.

Boston fans cheered when the fan let loose and Stanton smiled when the throw reached him on a bounce. Stanton gave a quick salute to the man.

"I wouldn't have thought it got to me that fast with a fan throwing it. I've never seen it happen before," Stanton said.

The home run record wasn't the only one to fall. Miguel Andujar hit two doubles and increased his total to 46, the most by a Yankees rookie since Joe DiMaggio hit 44 in 1936.

Yankees: RF Aaron Judge, whose eighth-inning homer Friday night tied the Yankees with the Mariners' record, was out of the lineup after hitting the right-field wall while making a catch. Boone said the Yankees were being cautious with Judge, who returned from the disabled list Sept. 14 with a wrist fracture. "I think it's a good day to get him down, as we've been going pretty hard with him, too," Boone said.

Red Sox: RF Mookie Betts was not in the lineup. Cora said Betts was getting a day off and was not injured.

Yankees: All-Star RHP Luis Severino (19-8, 3.39 ERA) had been listed to start Sunday, but was scratched. He remains an option to pitch in the wild-card game.

Red Sox: RHP Rick Porcello (17-7, 4.33 ERA) is expected to throw a couple innings in the regular-season finale as Boston rests its rotation for the ALDS.