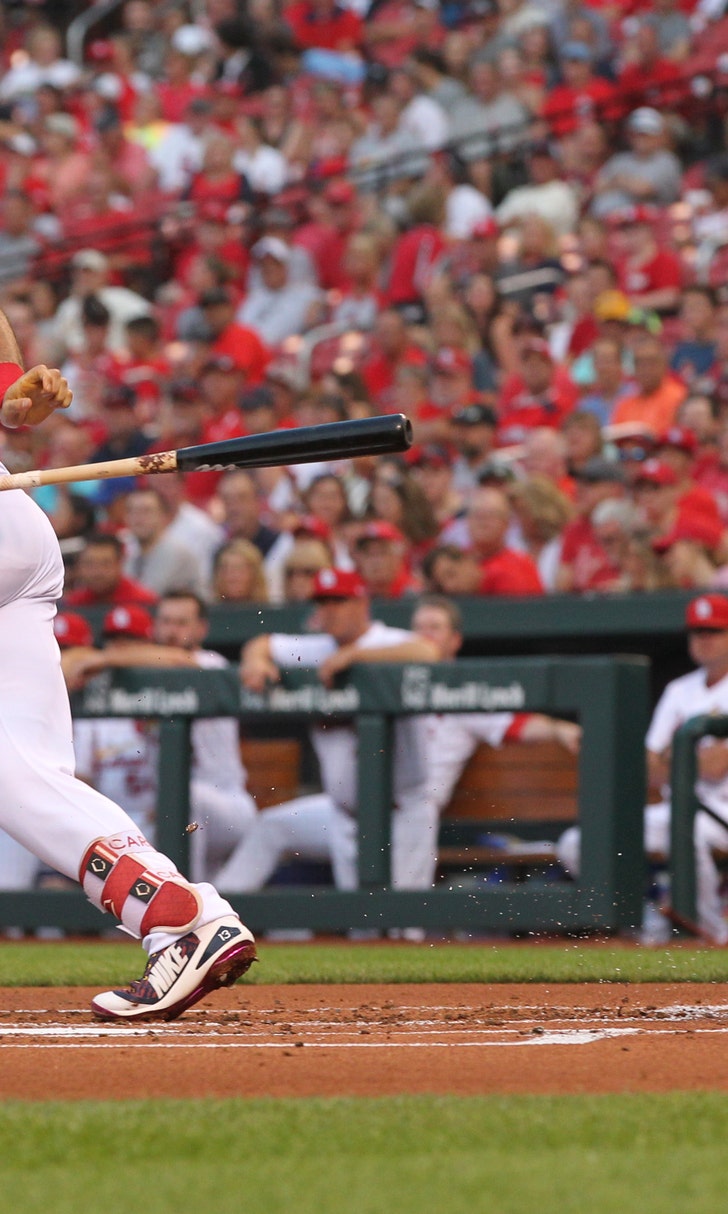 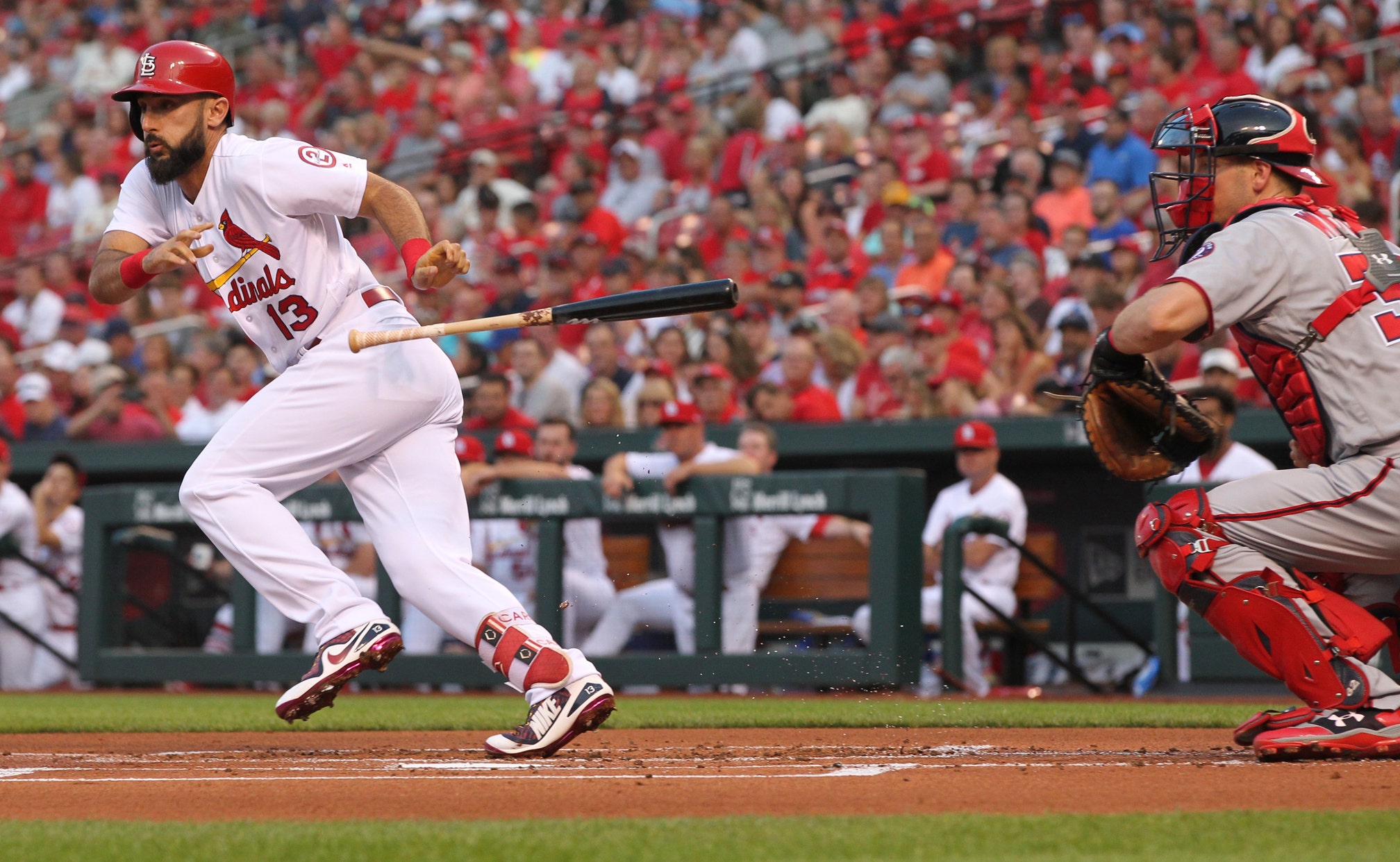 Nats walked off again, this time by Cards’ DeJong

ST. LOUIS (AP) — Nationals manager Dave Martinez was awake most of the night after Washington lost on a walk-off grand slam Sunday.

He likely won't be catching up on that missed sleep Monday.

Paul DeJong handed the Nationals their second straight walk-off loss, capping a back-and-forth finish with a game-ending solo homer in the ninth inning of the St. Cardinals' 7-6 victory Monday night.

DeJong took Koda Glover (0-1) deep leading off the ninth on a 3-1 pitch. A night earlier, Ryan Madson allowed a game-ending ninth-inning grand slam to the Chicago Cubs' David Bote in a 4-3 defeat.

"I don't sleep most nights, I like to watch replays of the game," Martinez said. "And last night was no different."

Washington's bullpen has blown saves in three of its past four games. All-Star closer Sean Doolittle has been on the disabled list since early July, and top setup man Kelvin Herrera went to the DL with right rotator cuff impingement last week.

"I don't know what else to do," Martinez said of the bullpen.

The usually stoic DeJong wasn't quite sure how to celebrate his first career walk-off homer. He started calm, keeping his head down as he rounded the bases. After coming around third, though, he whipped his helmet into the grass, threw his arms down and bellowed out a roar.

"My first walkoff, it felt so good I had to do something a little different," DeJong said.

The Cardinals recorded their 10th walkoff of the season and DeJong became the sixth different player to end a game in grand fashion.

"They're all special, all emotional," St. Louis interim manager Mike Shildt said. "These guys have the mentality, 'Do your job, keep the line moving.' They have a lot of trust with each other."

The Cardinals have won six in a row and moved to nine games over .500 for the first time this season.

Matt Carpenter and Jedd Gyorko homered in the eighth inning to put St. Louis up 6-4. Gyorko started the rally with a leadoff drive, and Carpenter followed with a three-run homer off Sammy Solis.

The Nationals tied it at 6 in the top of the ninth on RBI singles by Daniel Murphy and Matt Wieters off closer Bud Norris. Dakota Hudson (3-0) relieved Norris and stranded two baserunners by retiring Wilmer Difo and Adam Eaton.

Juan Soto and Bryce Harper homered for the Nationals, who have lost five of seven.

Gyorko sparked St. Louis' big eighth inning with his homer off Justin Miller. Kolten Wong and Patrick Wisdom then singled to set up Carpenter's 33rd homer. Carpenter has homered in seven of his past 10 games. He extended his major-league leading on-base streak to 31 games with a first-inning bunt single. He has 17 homers during that string.

Harper won a 10-pitch battle with starter Miles Mikolas by drilling his 29th homer leading off the fourth to lead 2-1.

Ryan Zimmerman added a run-scoring double in the second for the Nationals.

Jose Martinez had four hits for the Cardinals.

Mikolas gave up four runs on four hits over seven innings. He struck out four and walked one.

Tommy Milone started for Washington and gave up two runs on 10 hits over 4 1/3 innings.

When Carlos Martinez returns to the Cardinals this season, it will be in the bullpen. Martinez has been working back from a shoulder injury, and the team is worried it won't have time to stretch out its ace for a potential postseason push.

Martinez threw 30 pitches in a side session Monday. He will throw one more side session in the next few days, and could return to the active roster soon.

"I think he's probably looking like a (bullpen) weapon for the rest of the year," Shildt said.

Nationals: Madson is dealing with back issues, but Martinez says Madson plans to pitch through the difficulties. "He's a big part of our bullpen," Martinez said. Madson did not pitch Monday. ... INF Anthony Rendon returned to the lineup after missing two games due to a left wrist contusion.

Cardinals: RHP Adam Wainwright tossed a scoreless inning for Class A Palm Beach. The three-time All-Star was placed on the disabled list May 14 with right elbow inflammation and is beginning a 30-day rehab assignment. He struck out two and allowed one hit in the nine-pitch outing.

LHP Gio Gonzalez (7-8, 3.39) will face RHP John Gant (4-4, 3.89) in the second of the four-game series Tuesday. Gonzalez has allowed just two earned runs over 14 innings in two starts this season against St. Louis. Gant made his major league debut against Washington on April 6, 2016 as a member of the Atlanta Braves.

World Series Top Plays: Game 2
It's Game 2 of the Fall Classic. Here are the top plays from Wednesday night's Dodgers-Rays matchup, as they happen!
3 hours ago

World Series Watch Party: Game 2
Hang out with Nick Swisher, Tino Martinez, Rick Ankiel and Ben Verlander as they react to the action and answer your questions!
4 hours ago

Special Delivery
Clayton Kershaw's postseason reputation may precede him, but the Dodgers star is setting the stage to flip the script.
8 hours ago

Best Of Game 1 Watch Party
Relive Game 1 of the World Series with Nick Swisher, Tino Martinez, Rick Ankiel and Ben Verlander.
1 day ago
those were the latest stories
Want to see more?
View All Stories
Fox Sports™ and © 2020 Fox Media LLC and Fox Sports Interactive Media, LLC. All rights reserved. Use of this website (including any and all parts and components) constitutes your acceptance of these Terms of Use and Updated Privacy Policy. Advertising Choices. Do Not Sell my Personal Info