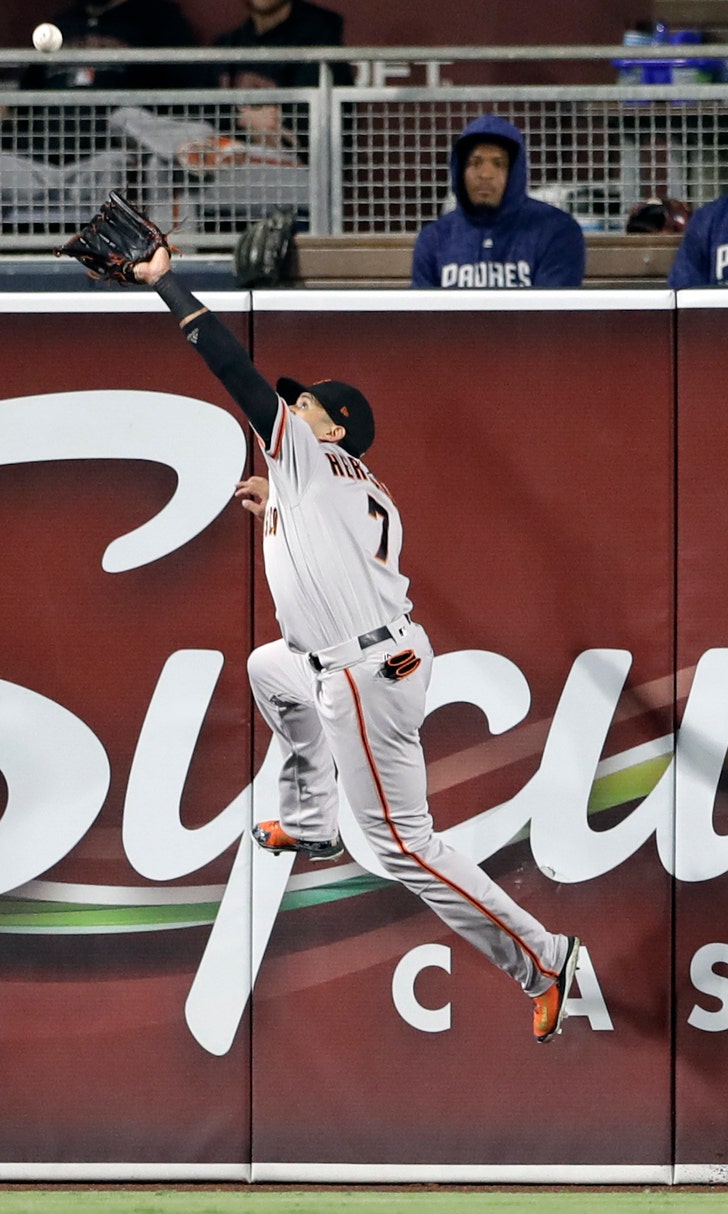 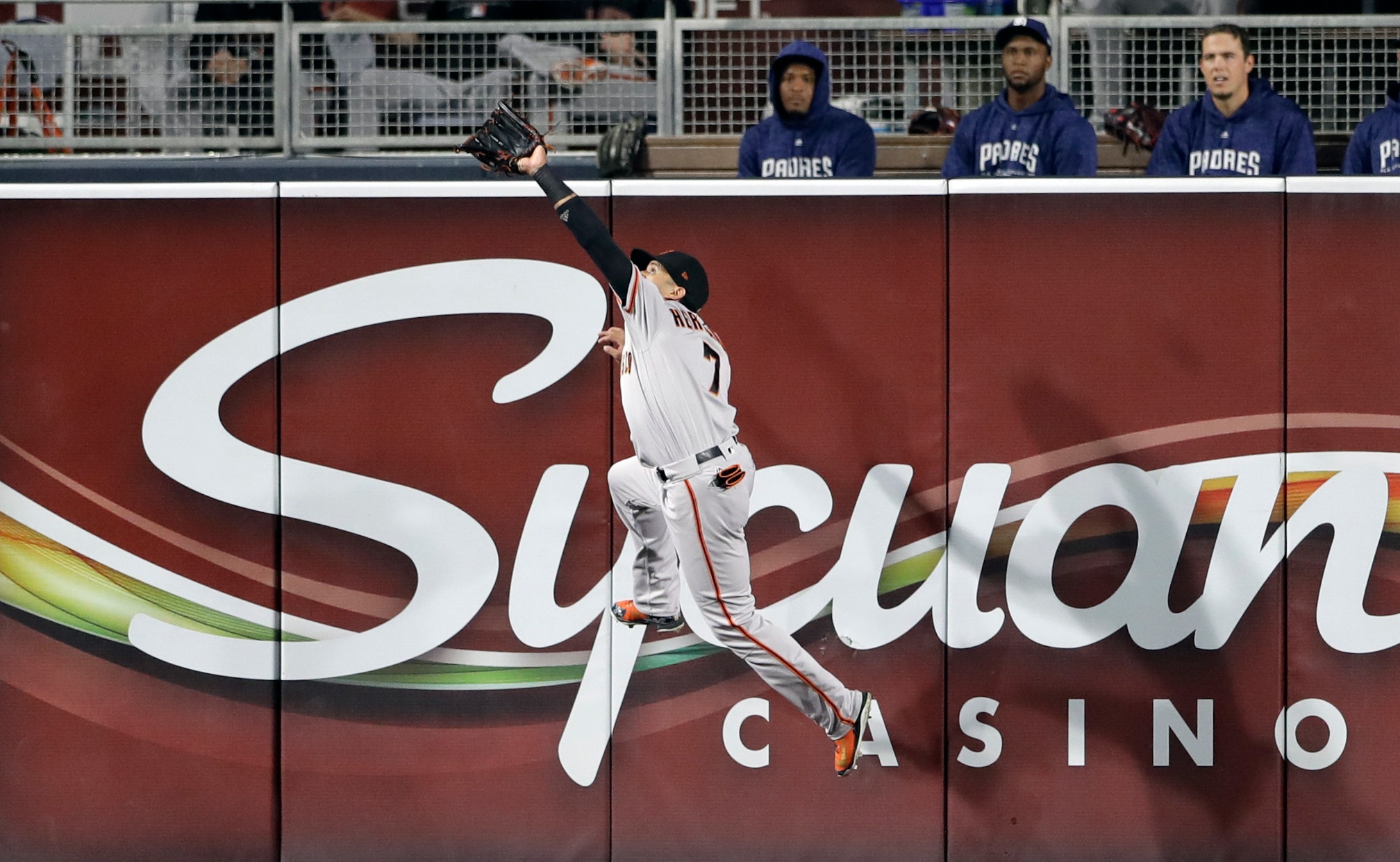 SAN DIEGO (AP) — Wil Myers wants to have a strong finish to a challenging season.

Myers hit a two-run homer to highlight a five-run second inning and lead the San Diego Padres to an 8-4 win over the San Francisco Giants on Wednesday night.

"I feel like I'm headed in the right direction," Myers said.

Considered the face of the franchise before Eric Hosmer was acquired in the offseason, Myers has bounced around from the corner outfield spots, to an occasion start at first base to now being the regular third baseman. More so than the position changes, however, it's his three stints on the disabled list which cost him 70 games that derailed his season.

"It was a good day for Wil," Padres manager Andy Green said, while noting Myers' defensive play, too. "He's definitely had stops and starts to this season, mostly because of injuries."

Freddy Galvis also homered and Robbie Erlin pitched five solid innings as the Padres avoided a three-game sweep. Galvin has hit in five straight games and has pulled out of a recent rut.

"His hitting has picked back up," Green said. "The way he grinds, he fights through the lows and comes back. He is a great example for the young guys."

Added Galvis: "The last couple of games I've got my timing back."

Galvis hit a three-run shot in the eighth as San Diego won for the second time in 10 meetings against San Francisco.

Erlin (4-7) beat the Giants for the first time and snapped a career-high four-start losing streak. The left-hander allowed three runs on five hits, with two walks and three strikeouts. His last victory came against the Rockies on Aug. 21.

Four Padres relievers allowed one run over the final four innings as San Diego ended its six-game homestand at 2-4.

Chris Stratton (10-9), who was coming off his first career shutout, was gone after three innings. Soon after putting the Giants ahead with a three-run double, Stratton, who was trying to beat the Padres for the second time this season, was replaced after surrendering five runs on six hits and a walk.

"I just don't think my fastball command was very good," Stratton said. "Sometimes it's going to be there, and sometimes it's not. You've got to battle with what you've got."

Rookie Armies Garcia's third homer in eight starts pulled the Giants within 5-4 in the eighth. Garcia has hit safely in nine of his first 10 career games.

The Padres batted around in the second inning to go ahead 5-3. The big blow was Myers' 11th homer this season, which landed in the Padres' bullpen in left-center.

Before Myers went deep, Franmil Reyes extended his hitting streak to a career-high 11 games with a single, Cory Spangenberg and Galvis produced RBI singles and Manuel Margot added a run with a sacrifice fly.

Stratton helped himself with a two-out, bases-loaded double in the second. The first extra-base hit of his career put the Giants ahead 3-0.

"He gets a big hit there, knocks in three and you like the lead early in the game," Giants manager Bruce Bochy said. "He just couldn't get on track that second inning."

Brandon Crawford had his 10th three-hit game of the season for the Giants and his first since June. 26.

Giants: 1B Brandon Belt (knee) returned to San Francisco to be evaluated by team doctors, with a strong possibility that he will undergo season-ending surgery.

Giants: LHP Madison Bumgarner (6-6, 3.14 ERA) gets the start on Friday when the Giants open a three-game series at St. Louis. The last time Bumgarner pitched at Busch Stadium was in Game 1 of the 2014 NLCS, when he blanked the Cardinals for 7 2/3 innings. Bumgarner is coming off a six-inning scoreless gem in beating the Rockies on Sept. 15.

Padres: LHP Eric Lauer (5-7, 4.74) opens the Padres' final trip, facing the Dodgers on Friday. Lauer will make his first career start at Dodger Stadium after dominating the Dodgers at Petco Park this year, going 2-0 with a 0.61 ERA.

Scenes From LA's Celebration
The Los Angeles Dodgers are crowned World Series champions for the first time in 32 years, and the emotions were on full display.
7 hours ago

Best Of Game 6 Watch Party
Nick Swisher, Tino Martinez, Rick Ankiel and Ben Verlander react to Blake Snell being pulled and the Dodgers' title win.
9 hours ago
those were the latest stories
Want to see more?
View All Stories
Fox Sports™ and © 2020 Fox Media LLC and Fox Sports Interactive Media, LLC. All rights reserved. Use of this website (including any and all parts and components) constitutes your acceptance of these Terms of Use and Updated Privacy Policy. Advertising Choices. Do Not Sell my Personal Info