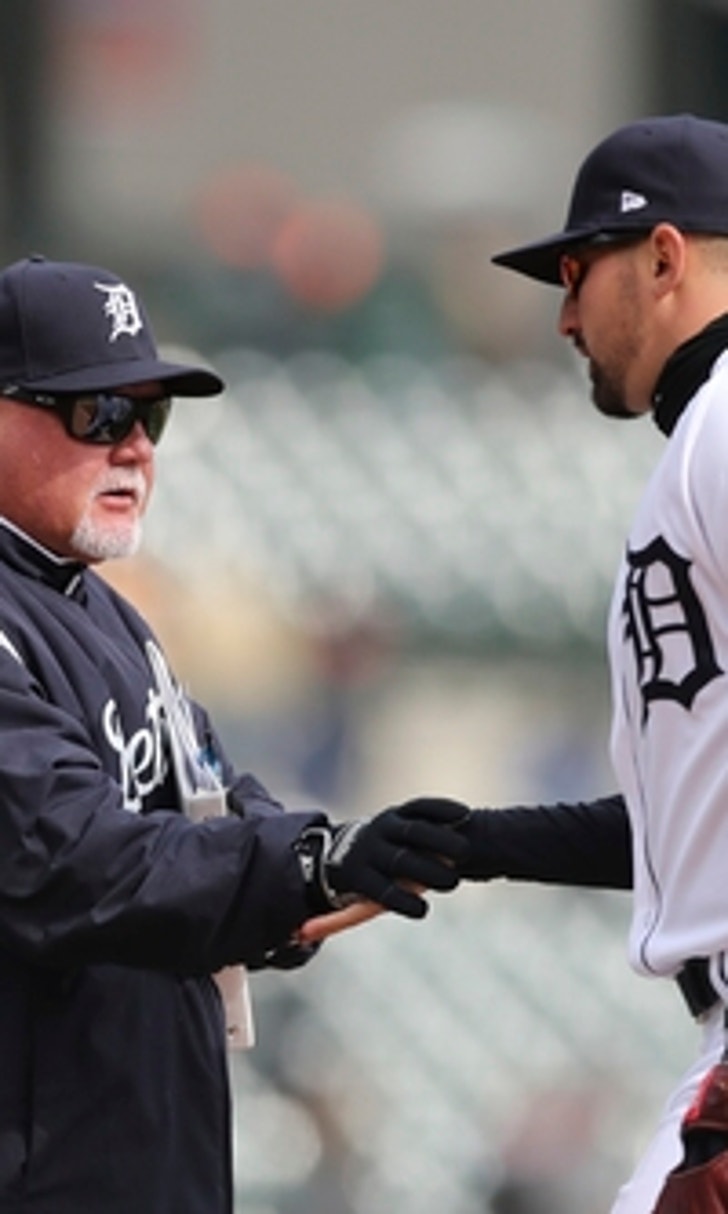 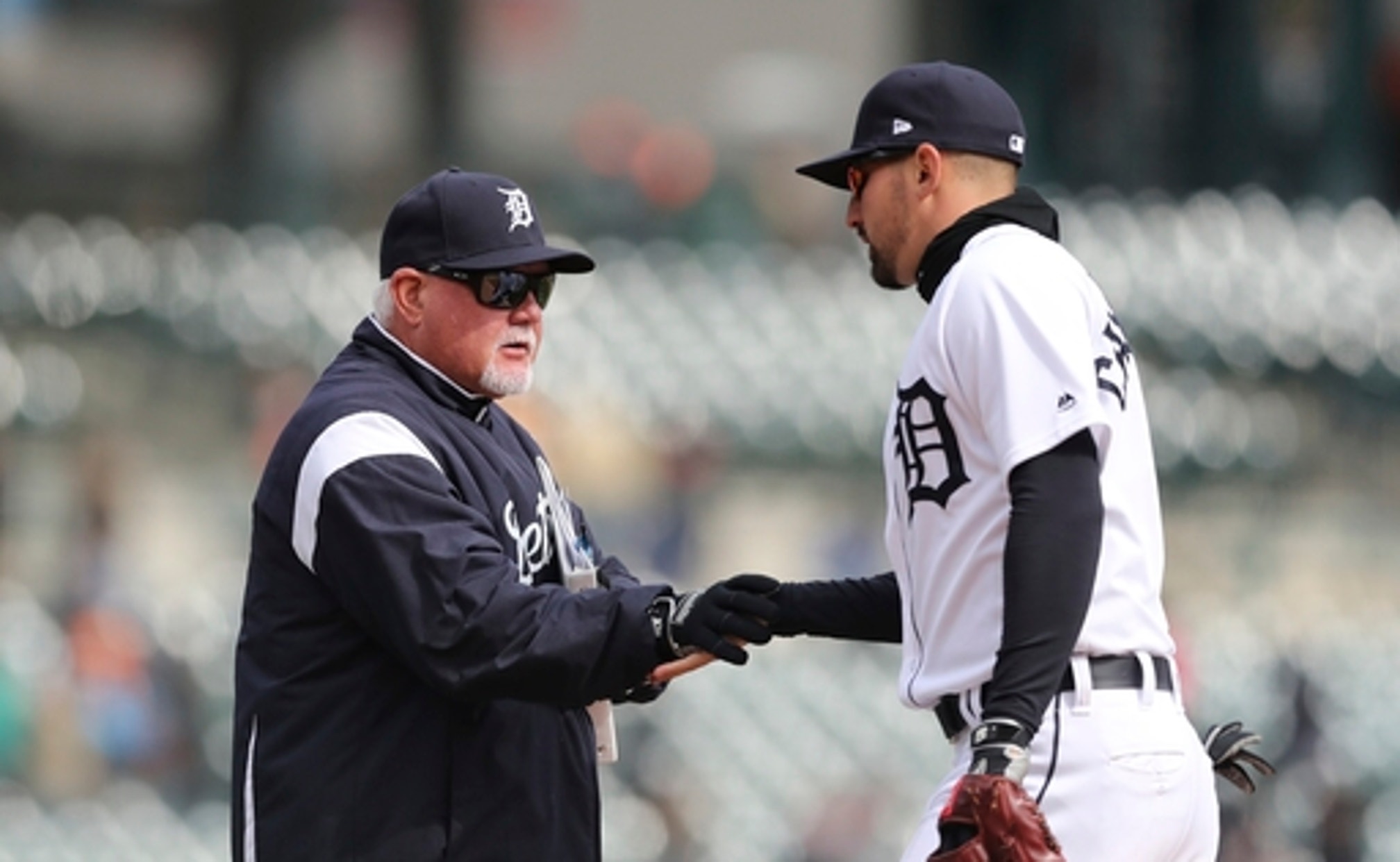 Gardenhire gets 1st win with Tigers

Morton (1-0) allowed three hits and struck out six. The right-hander picked up where he left off after getting the final 12 outs in Game 7 against the Dodgers to help secure Houston's first championship.

Brad Peacock pitched a perfect seventh and Will Harris allowed one hit in the eighth before Collin McHugh took over. The starter-turned-reliever allowed a homer to Trey Mancini and a double to Colby Rasmus before retiring the last three batters.

PHOENIX (AP) - Chris Owings hit a three-run homer off All-Star closer Kenley Jansen with two outs in the bottom of the ninth to force extra innings, and Arizona scored twice in the 15th to rally past Los Angeles.

The first matchup between the teams since the NL champion Dodgers swept their Division Series last October became the longest game in Chase Field history at 5 hours, 45 minutes.

Chase Utley's RBI single shortly after midnight put the Dodgers up 7-6 in the 15th, but Nick Ahmed's run-scoring double tied it in the bottom half and pinch-hitter Jeff Mathis singled home Ahmed with the game-winner.

Both teams used all their available relievers.

All five Boston starters have allowed less than two runs, a franchise first to begin a season.

Trevor Richards (0-1), the Marlins' minor league pitcher of the year in 2017, retired the first seven batters in his major league debut but then allowed five runs in 4 1/3 innings.

ATLANTA (AP) - Bryce Harper hit a three-run homer, helping the Nationals to the first 4-0 start in their Washington history.

Braves right-hander Anibal Sanchez, whose contract was purchased from Triple-A Gwinnett before the game, pitched three scoreless innings in relief to strengthen his bid for a spot in the rotation.

DETROIT (AP) - Francisco Liriano pitched into the seventh inning and Victor Martinez drove in three runs to hand Ron Gardenhire his first win with the Tigers.

Gardenhire won 1,068 games as Minnesota's manager from 2002-14. This is his first year at the helm in Detroit.

The temperature was in the mid-30s at Comerica Park for a matchup between the last two winless teams in the American League.

Liriano (1-0) allowed a run and four hits in 6 2/3 innings. The Tigers scored four runs in the fifth, with Martinez delivering a two-run single off Jason Hammel (0-1).

All six runs in the game came on homers.

Welington Castillo went deep twice for the White Sox for his sixth career multihomer game and third straight against Toronto. Castillo hit five home runs against the Blue Jays in 2017, his highest total against any opponent.

Martin erased a 2-1 deficit with a two-run drive off Danny Farquhar (1-1) with two out in the seventh.

Seung Hwan Oh (1-0) got the win despite allowing Castillo's second homer, a tiebreaking shot in the top of the seventh. Roberto Osuna worked the ninth for his second save.

PITTSBURGH (AP) - Colin Moran hit a first-inning grand slam in his debut at PNC Park, Jameson Taillon tied a career high with nine strikeouts and Pittsburgh held on for the win in its home opener.

Moran, part of a trade that sent Gerrit Cole to Houston in January, sent a full-count fastball from Lance Lynn into the seats above the Clemente Wall in right field to stake the Pirates to an early lead they nursed to just their third 4-0 start in 35 years.

Brian Dozier homered for the second straight day for the Twins. Lynn (0-1) lasted just four innings in his first game with Minnesota since signing a one-year deal last month.

MILWAUKEE (AP) - Pitcher Miles Mikolas hit a home run and got the win in his return from a three-year stint in Japan, and the Cardinals spoiled the Brewers' home opener.

St. Louis shortstop Paul DeJong connected for the second straight game, hitting his third homer this season. Milwaukee had opened the season with a three-game sweep at San Diego.

CINCINNATI (AP) - Rookie Tyler Mahle pitched one-hit ball for six innings, Raisel Iglesias struck out Anthony Rizzo with the bases loaded to end the eighth, and the Reds edged the Cubs for their first win of the season.

Eugenio Suarez tripled in the fourth and scored on Adam Duvall's groundout for the game's only run.

Cincinnati was swept at home by Washington, falling to 0-3 for the first time since 2003. It also trailed in all 27 innings - the Nationals scored in the first inning each time.

Mahle (1-0) earned the victory in only his fifth major league start, outpitching Tyler Chatwood (0-1) in his Cubs debut. Iglesias got four outs for the save.

Chicago has been blanked in back-to-back games for the first time since last May 26-27, when the Dodgers beat the Cubs 4-0 and 5-0.

Matt Chapman homered for the second time in two days for Oakland. The A's had lost three straight since beating the Angels on opening day.

Joey Gallo singled in a run for Texas. The Rangers have dropped six consecutive road openers and nine straight games at the Coliseum.

Called up from the minors before the game, Colon allowed seven hits in six innings. The A's only run off the portly right-hander came on Chapman's homer leading off the third.

At 44 years, 313 days old, Colon became the oldest player in the majors this season, slipping past Seattle's Ichiro Suzuki, who is four months younger.

Chris Hatcher (2-0) retired two batters for the win. Blake Treinen pitched 1 2/3 innings for his first save.

Mike Clevinger (1-0), a former Angels farmhand, scattered four hits and struck out five in 5 1/3 innings in his season debut.

The 35-year-old Encarnacion also hit an inside-the-park homer on Aug. 31, 2007, against St. Louis while with the Cincinnati Reds. He homered twice Sunday in a loss at Seattle.

Wil Myers and Cory Spangenberg homered for the Padres, who dropped to 0-4. Bryan Mitchell (0-1) struggled in his five-inning debut with San Diego.

Desmond hit a two-run homer in the fifth and an RBI double in the third to help the Rockies win for the 10th time in their last 16 games at Petco Park. Blackmon and LeMahieu added back-to-back solo homers in the ninth.

Wade Davis got one out for his second save.