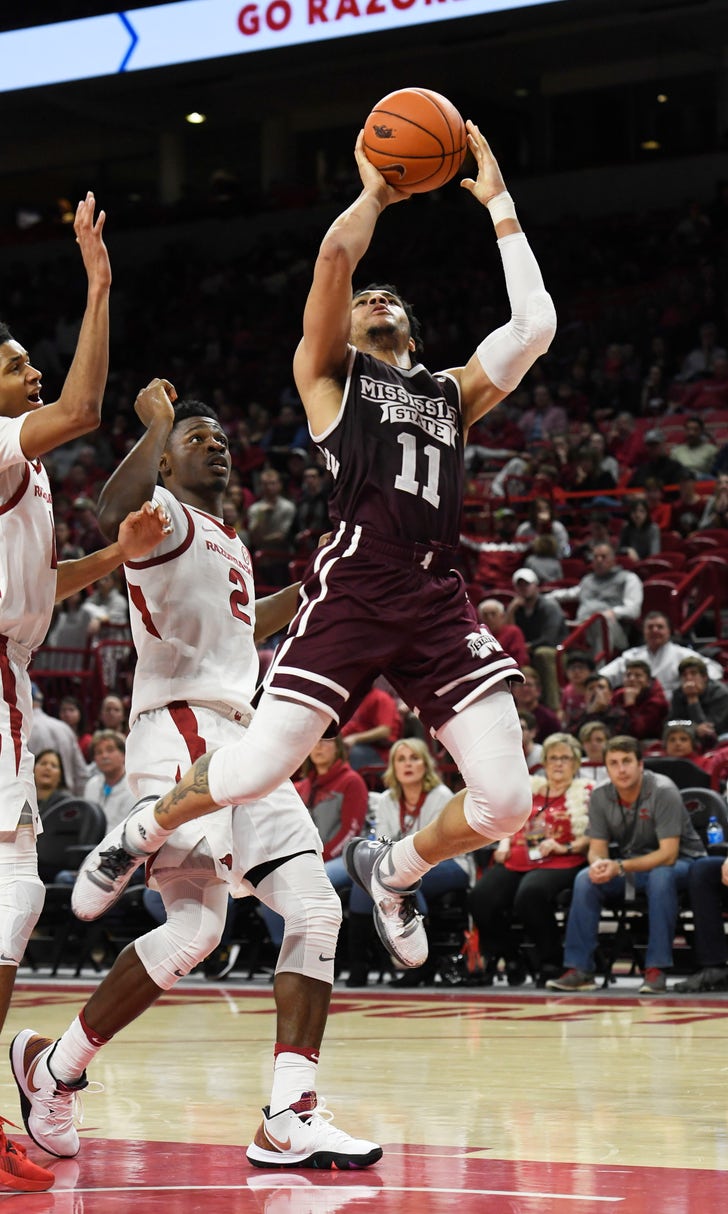 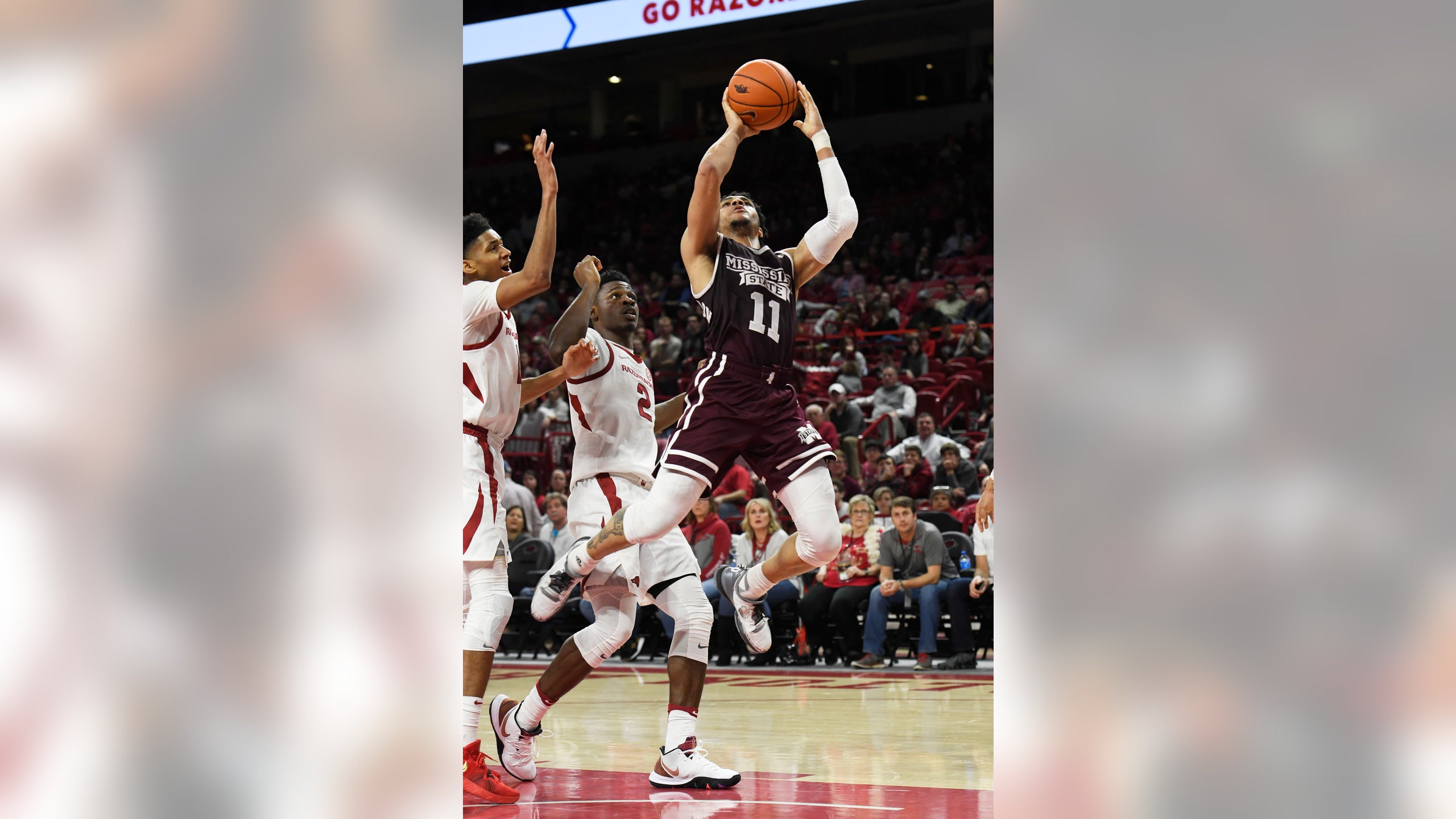 FAYETTEVILLE, Ark. (AP) — Mississippi State trailed by six points at halftime and seemed to have no answer for Arkansas' 3-point barrage in the first half. An inspired defensive performance after the break, however, sparked a huge run and powered the Bulldogs to a 77-67 win Saturday night.

"Obviously, it's usually the other way around, and that's why it's so amazing," said Mississippi State coach Ben Howland, referencing Arkansas' tendency to force turnovers and generate scoring. "It was our kids' defense. They did a great job defensively. We did a better job in the second half not turning the ball over because we weren't facing a press because we were getting stops."

By the time Mason Jones stopped the run, converting a 3-point play at the 11:33 mark, the Razorbacks trailed 55-44. Any momentum from the play was immediately nixed when Tyson Carter hit a jumper on the other end to push his team's lead back to 13.

The Razorbacks had 10 turnovers in the first half alone, nearly eclipsing their average of 12.8 per game over their last six contests. Their 10 turnovers in the second half were more crippling, however, as many came immediately after transition-starting defensive stops.

"We had 14 steals, but they weren't gambling steals, they weren't bad steals. It was good help-side defense," Howland said. "I'm just really happy and excited that we were able to come up with a really important quad-one road win here."

The second half featured 14-point performances from Quinndary Weatherspoon and Tyson Carter, who finished with 22 and 18, respectively. Carter stepped up in the absence of the team's fourth-leading scorer, Nick Weatherspoon, who was suspended indefinitely after violating team rules. The output was a season high for the junior.

"I thought Tyson Carter really stepped up tonight without Nick out there. His minutes really helped," Howland said. "We're going to expect it from him whether Nick's out or not. It's all related to his minutes. I thought he did a great job when we made a run, getting out in transition and getting a couple extra (baskets)."

Reggie Perry had 12 points and 10 rebounds for his fifth double-double in the last seven games. This was his first time to play against Arkansas, a school he was committed to for nearly a year before ultimately enrolling at Mississippi State. He was met with boos during the pregame introductions and nearly every time he touched the ball.

Perry also played a significant role in shutting down Gafford, who came into the contest scoring 20-plus points in three of his past four games. Against Mississippi State forward Abdul Ado and the ever-aggressive Perry, Gafford managed to score only eight points, six of which came in the second half. He played 34 minutes, his most since Jan. 23, but he found it tough to convert around the basket.

"We just had to be physical," Perry said. "We knew that he was a big, strong player, and we knew that they were going to go to him a lot, but I feel like we stepped up to the challenge and played pretty well against him."

Arkansas started out the game hitting its first five shots, and it went into halftime with a 6-for-10 mark from behind the arc. Mason Jones hit four of those 3s to give him 12 points heading into the break. He finished with 30 points, the Hogs' only double-digit scorer.

"This locker room definitely can recover," Jones said. "We've been on a losing streak before, and being in a losing streak this late in the year is kind of hard, but our guys are fighters. We're going to wake up, live another day and just prepare our bodies for Wednesday against Auburn."

On the other side, the Bulldogs' well-rounded scoring effort included double-digit performances from Weatherspoon, Carter, Perry and Robert Woodard II (10).

Mississippi State: Ben Howland's Bulldogs have beaten the Hogs in all four matchups since he took over in 2015. Including Saturday, Weatherspoon was the leading scorer in the last three, scoring 25, 22 and 22, respectively. After losing to LSU in overtime Feb. 6 and Kentucky by four three days later, Mississippi State is now on a two-game winning streak. It marked the 12th halftime comeback by Howland during his tenure in Starkville.

Arkansas: The Hogs are on a three-game losing streak at a very inopportune time. With only six games remaining, the Razorbacks must earn some unexpected wins in an upcoming schedule that includes road games at Auburn and Kentucky and home contests against Ole Miss and Alabama. The team dropped to 2-3 in February, which is uncharacteristic of Mike Anderson's teams. The loss drops the coach's record in February to 38-23 in eight seasons.

The Bulldogs continue their two-game road trip at Georgia on Wednesday.

The Razorbacks travel to Auburn on Wednesday.