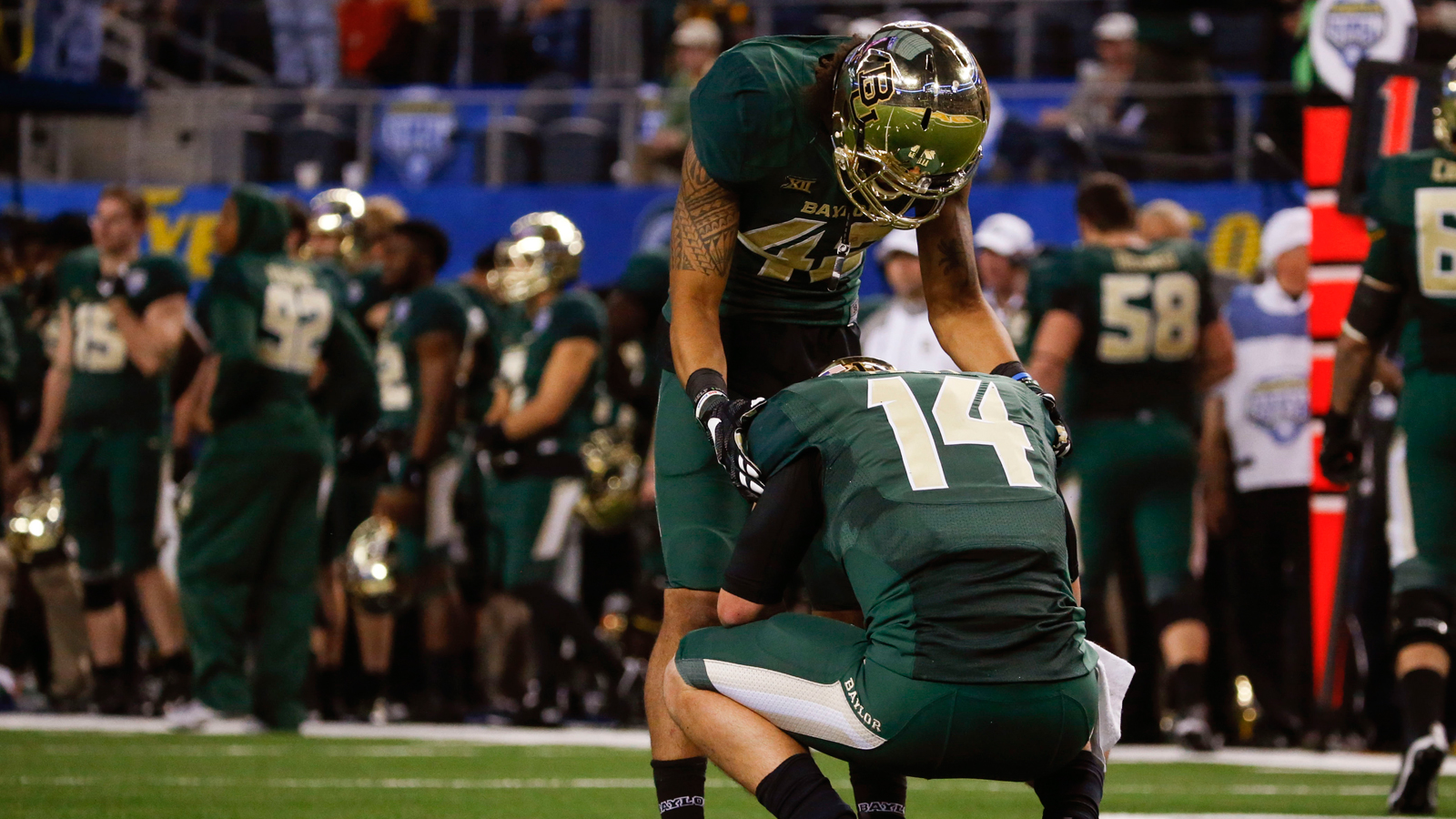 ARLINGTON, Texas (AP) — After their only two losses came against playoff teams, Connor Cook and Michigan State finished off their season with a three-touchdown comeback in the fourth quarter against playoff-snubbed Baylor.

Cook threw a 10-yard touchdown pass to Keith Mumphery with 17 seconds to give the No. 7 Spartans a 42-41 victory in the Cotton Bowl, the lead-in game on New Year’s Day to the two national semifinals that No. 4 and two-time Big 12 champion Baylor (11-2) hoped to be part of instead.

When Baylor got the ball back for one last try, Bryce Petty was sacked on consecutive plays before Riley Bullough’s clinching interception.

Petty completed 36 of 51 passes for a Cotton Bowl-record 550 yards and three touchdowns, two to speedy freshman KD Cannon and the other to 390-pount backup guard LaQuan McGowan that put Baylor up 41-21 late in the third quarter.

Jeremy Langford ran for 162 yards and three touchdowns for the Spartans, whose losses were to Pac-12 winner Oregon and the Big Ten champion Ohio State.

Langford’s 1-yard plunge with just under 5 minutes left got the Spartans to 41-35. That came the play after Cook’s 11-yard scramble was initially called a touchdown but ruled short after a replay review.

Callahan had a 46-yard field goal attempt that ricocheted off the right upright to start the fourth quarter. Michigan State then got Cook’s 8-yard TD pass to tight end Josiah Price and recovered an onside kick.

Cook threw a 39-yard pass on the first play after the recovery, but was scrambling to avoid pressure on the next when threw an awkward pass right to linebacker Taylor Young, who ran 84 yards to the end zone.

Young’s apparent touchdown was wiped out by an illegal block, pushing Baylor back to its 43. After Petty’s fourth-down incompletion, Michigan State went 60 yards in nine plays for Langford’s final score.

Michigan State won its fourth consecutive bowl game, this one the highest-scoring Cotton Bowl game ever. The Spartans were only the second Big Ten team in the game that was played for the 79th time.

Baylor finished fifth in the final College Football Playoff rankings, a spot ahead of TCU, the team the Bears shared the Big 12 title with despite beating the Frogs 61-58 in October. TCU won its bowl game handily, beating Mississippi 42-3 in the Peach Bowl on Wednesday.

It was tied at 14 after the first quarter, but Baylor went ahead 24-14 at the half on Petty’s 1-yard TD run and Callahan’s 25-yard field goal.

Cannon, already with a 49-yard TD catch, got the Bears started in the second half when he split two Michigan State defenders and was in a full sprint when he reached out with both hands and made a fingertip grab near the 35. He gathered the ball in and ran to the end zone to finish a 74-yard TD before Callahan added another field goal.

Cannon finished with eight catches for 197 yards, and Corey Coleman had seven catches for 150 yards, including a 53-yard score on a throw from fellow receiver Jay Lee.

The Bears had 583 yards, even with minus-20 yards rushing. Michigan State had 552 yards, including Cook’s 314 yards passing.