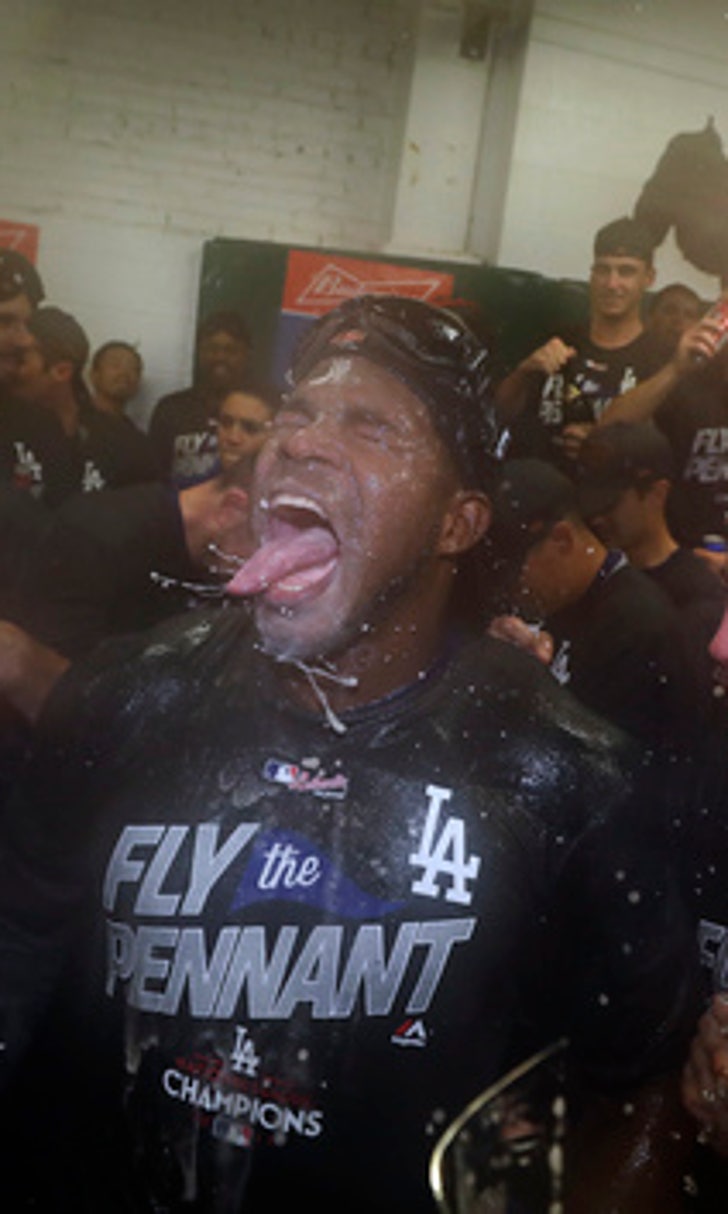 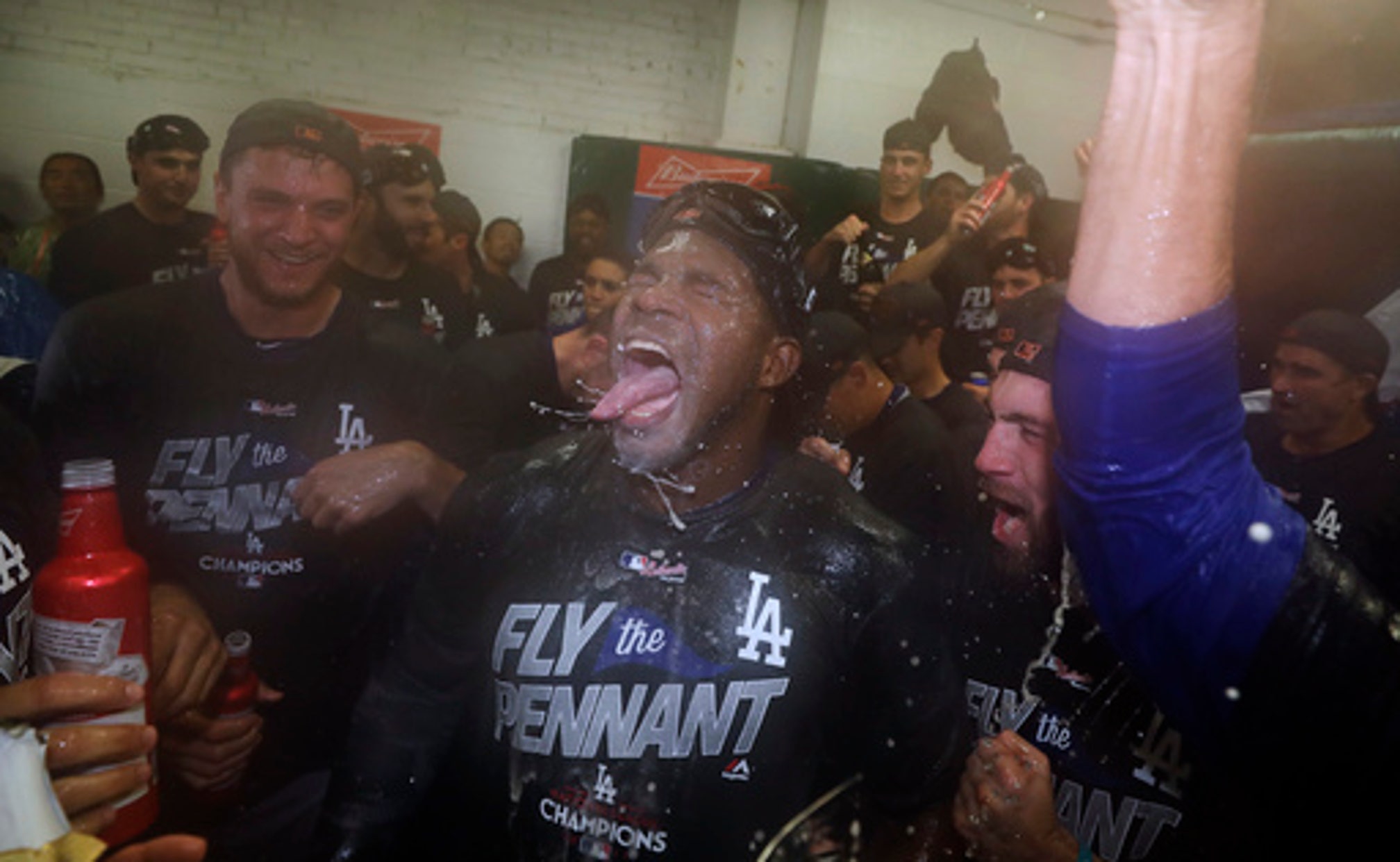 previous story
Clutch plays fuel no-name Bills in getting off to 4-2 start
next story
For love of the game: Puig's infectious joy powers Dodgers

For love of the game: Puig's infectious joy powers Dodgers

LOS ANGELES (AP) Wagging his tongue, licking his bat and calling his shot, Yasiel Puig has powered the Dodgers' run to their first World Series appearance in 29 years.

Heck, the 26-year-old Cuban has even assigned himself a curtain call.

Puig's play and personality have been a huge hit on baseball's biggest stage. He's been shrewd at the plate and his arm is a cannon from the outfield. His emotional behavior has sparked the team while he's remained focused on the field.

Puig made an entrance at World Series media day on Monday, interrupting Turner Ward mid-sentence to plant a smooch on the hitting coach's left cheek before picking his way through the throng to his assigned table.

Once seated, Puig bellowed for Ward to come over and return the favor. Ward complied, kissing Puig's right cheek.

''He give me a lot of information for this year and tried to get me to take it easy at the home plate and take the best pitch I can,'' Puig said in English. ''He help me with my teammates. That's why I play better this year.''

Puig's been a revelation of the best kind during these playoffs, quite the opposite of the defector who alternately delighted and bedeviled his manager, teammates and the Dodgers' front office upon making his big league debut in June 2013.

Puig hit .455 in the NL Division Series against Arizona, licking his bat, making faces and flipping his bat after a mere single. Those are the kind of antics that used to rankle his teammates and divide fans into those who loved his passion and those who felt it detracted from the team.

Away from the field, there were two reckless driving arrests eight months apart in his rookie year. During games, there were foolish decisions on the base paths and in the outfield that maddened fans and the front office alike. Hamstring issues reduced Puig's playing time and production the last two years.

Things came to a head last fall when Puig got demoted to the minors and the Dodgers seemed intent on trading away their runner-up for NL Rookie of the Year in 2013. Suitably chastened, he rejoined the team that September and ended the regular season hitting .263.

This season, Puig has been more good than bad, which included obscene gestures to fans in Cleveland in June and a benching by manager Dave Roberts for ending a game on an ill-conceived steal attempt in September.

Puig has had a career year: staying healthy enough to play in 152 regular-season games while setting personal bests with 28 home runs, 74 RBIs and 15 stolen bases to go with a lone error.

''The biggest difference between this year and years past is that he's been able to toe that line perfectly,'' third baseman Justin Turner said. ''He's enjoying the game, he's having fun. He's doing the 2013 Puig things, but at a concentration level that's extremely higher.''

Puig's tear has extended into the playoffs.

In eight games, Puig is batting .414 - third-highest on the team. His 12 hits are tied for the team lead with Turner. The Cuban has produced six runs, six RBIs and six walks. He has an OBP of .514 and a slugging percentage of .655.

Just three years ago, Puig struck out seven times in a row in the NLDS against St. Louis.

So far in these playoffs, he's struck out three times.

''The discipline,'' Turner said. ''I think that's kind of what everybody has noticed more than anything. To me, that's mental. Watching him mentally grow and be more disciplined, that's been the biggest complement to what he's been doing.''

Puig walked three times in one game against the Cubs in the NLCS.

''To me, that was like hitting a homer because we want to keep this lineup moving,'' Ward said.

Call it maturity or simply experience, Puig's numbers and his infectious joy have helped silence some critics. He's not just playing for himself anymore, either. Puig is the father of two sons, and his girlfriend is expecting a third.

Retired Hall of Fame broadcaster Vin Scully got it right when he dubbed Puig ''The Wild Horse'' as a rookie. His talent and unpredictable ways make every game, every inning, a whipsaw of emotion.