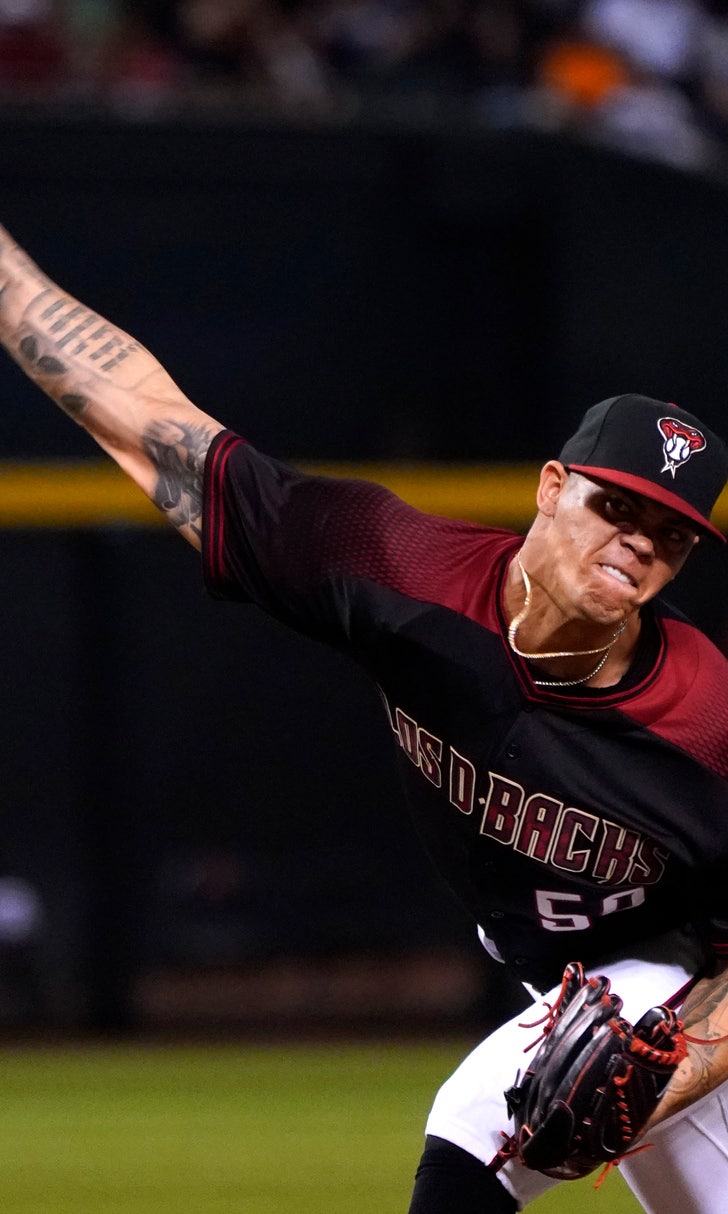 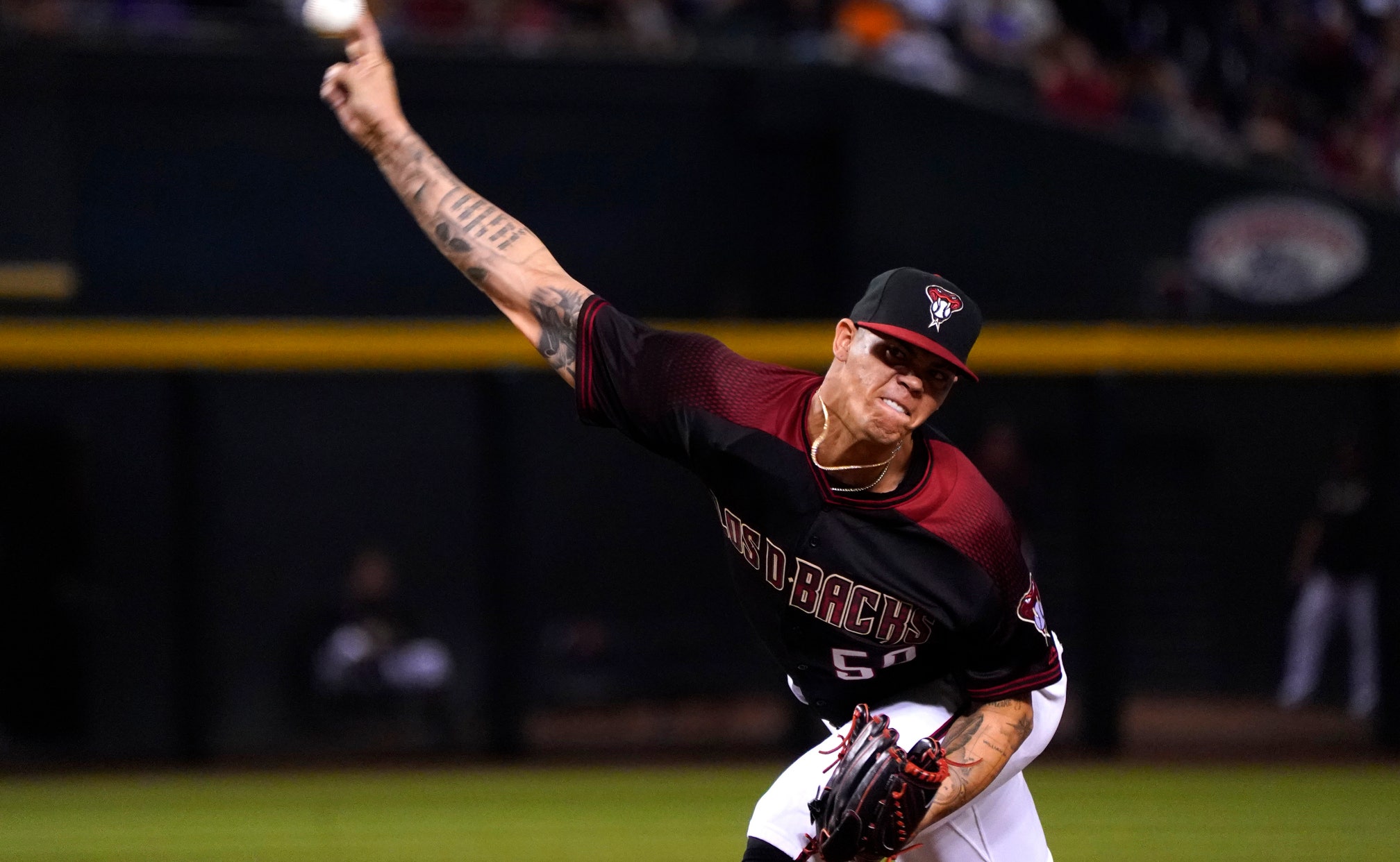 Escobar homers late, Arizona tops Dodgers in a wild one

PHOENIX (AP) — Don't tell the Arizona Diamondbacks they are out of the race for the National League wild card.

Not when Eduardo Escobar is on a tear, Archie Bradley is closing out important games and the Diamondbacks have come from behind for three straight wins over the rival Los Angeles Dodgers in front of raucous crowds.

Escobar homered for the third straight game and the Diamondbacks beat the Los Angeles Dodgers 6-5 on Saturday night before a crowd of 50,180, a single-game attendance record for Chase Field.

Bradley got out of a no-out, bases-loaded jam by catching the throw from second base on a key ninth inning double play and screamed and thumped his chest after getting the game's final out.

"My heart's still beating fast, I'm so excited," Bradley said after the game. "I caught it, the first thing I did was looked at the umpire and he gave a big punch out, and wow, it was massive right there. All I had to do was get one more out."

Escobar's solo shot was his 10th home run in August and 32nd of the season. The homer came off Dodgers closer Kenley Jansen in the bottom of the eighth inning.

Kershaw, who lost his second straight start, was charged with five runs on five hits, six strikeouts and two walks in five innings. He failed to last six innings for the first time in 22 starts.

"Felt pretty good today actually. Just kind of left a few pitches middle gain and gave up some homers," he said. "They hit mistakes, tonight they did a good job with it, so don't make mistakes."

The Dodgers loaded the bases in the top of the ninth off Bradley. But pinch-hitter Matt Beatty grounded into the big double play that scored a run, and pinch-hitter Russell Martin grounded out to end the game.

Justin Turner and Will Smith homered for the Dodgers.

This game could have went either way in that ninth inning, so the way we play the game, play 27 outs, that hasn't changed," Dodgers manager Dave Roberts said after his team dropped its sixth game in the past nine.

Walker and Flores homered in the bottom of the fourth, tying the game after the Dodgers raced to a 3-0 lead. Walker's two-run shot was his fourth in 10 career at-bats against Kershaw.

Kershaw hung his head in exasperation as Walker's drive hit above the yellow line on the center field batter's eye. He has consecutive losses for the first time since April 20-25, 2018, and his 23 home runs allowed matches a career high.

"I feel like I've faced him enough now to where I have a pretty good feel for how he's going to try to get me out," Walker said. "It's just a lot of fun showing up to the ballpark playing like we want to play. This is who can be, this is who we are."

The Dodgers went up 4-3 on a leadoff double from A.J. Pollock and Enrique Hernandez's sacrifice fly in the fifth. But the Diamondbacks took their first lead, 5-4, on Nick Ahmed's two-run double down the left field line with one out in the bottom of the inning.

Turner connected on a 2-0 pitch for his 26th home run of the season with two outs in the top of the third.

Smith hit his 13th homer of the season to open the fourth inning, another ball that landed in the seats in left field. Smith has 10 home runs since being called up from the minors July 26.

The Dodgers added Jedd Gyorko's RBI double in the fourth for a 3-0 lead.

"We are on a good path," Diamondbacks manager Torey Lovullo said. "Something special's happening, and we'll see where it takes us."

KERSHAW OFF THE MOUND

Kershaw had an interesting night beyond pitching. He reached back to catch a wayward toss from Gyorko and forced out Walker at the bag in the second inning. Then, he was thrown out at second base trying to stretch a single into a double two batters before Turner's home run.

On the day the Diamondbacks celebrated their relationship with Mexico's Pacific League, the team wore batting practice tops bearing the logos of the league's teams and black "Los D-backs" jerseys.

Representatives from each of the LMP's 10 teams attended, and the game had a Mexican feel to it with a live band playing in the stadium left-field bleachers.

The Hermosillo Naranjeros (Orange Growers) are often considered the most popular Mexican baseball team in Arizona, with its proximity to Mexico's northern state of Sonora, where Hermosillo is located.

Dodgers: OF Alex Verdugo (oblique strain) will start a rehab assignment with rookie-level Ogden on Sunday, and manager Dave Roberts said Verdugo could be activated from the injured list next weekend.

Diamondbacks: IF Ketel Marte was out of the lineup for the second straight game with a lingering hamstring problem, though he pinch hit for Ray in the fifth. ... RHP Luke Weaver (forearm tightness) will throw a simulated game Monday. ... RHP Yoshihisa Hirano (right elbow soreness) will throw off a mound as the next step in his progression toward a return.

Dodgers: RHP Ross Stripling is set to come off the injured list and start Sunday. Stripling (4-4, 3.64 earned run average) has made 12 starts this season.

Diamondbacks: LHP Alex Young (6-3, 3.81 ERA) is set for his third appearance against the Dodgers this season on Sunday.