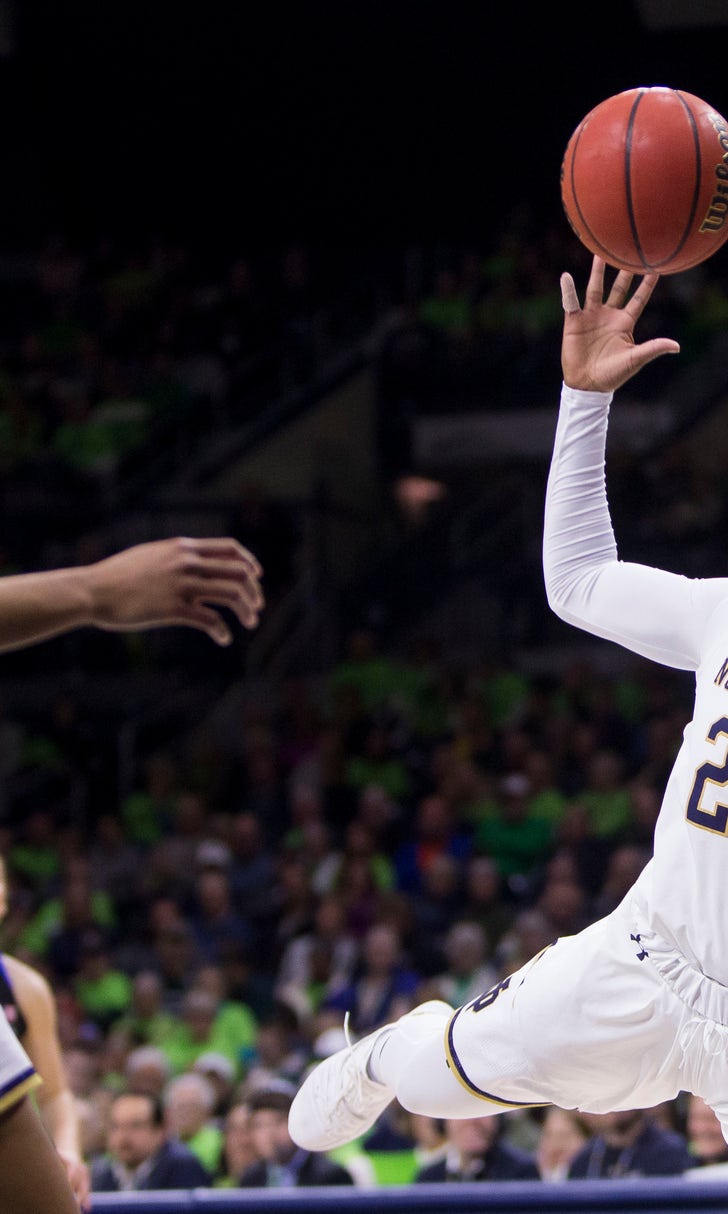 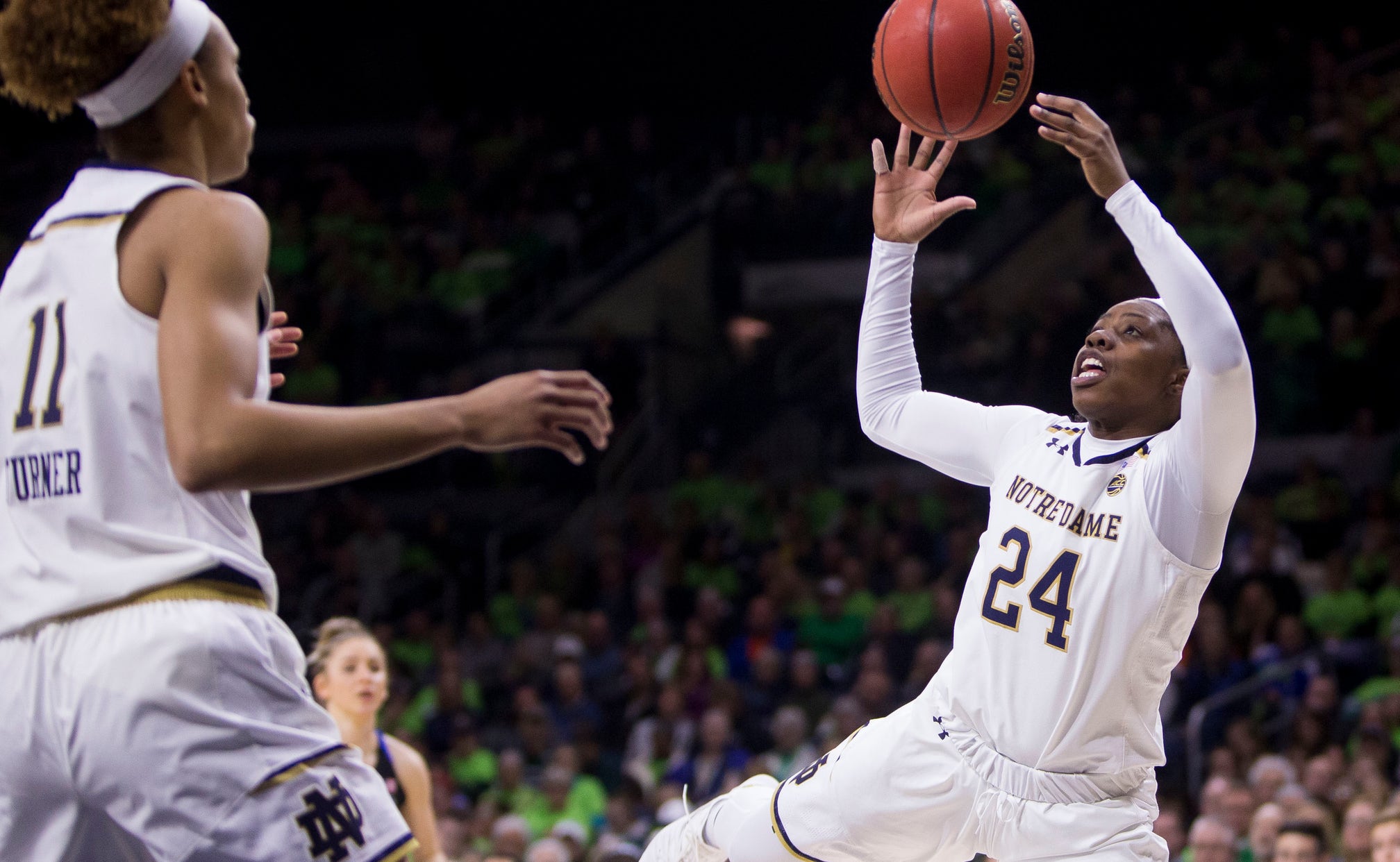 SOUTH BEND, Ind. (AP) — On a historic Thursday evening for Arike Ogunbowale, Muffet McGraw was just as pleased by the double-doubles she received from frontliners Brianna Turner and Jessica Shepard in No. 5 Notre Dame's 89-61 rout of Duke.

"What a momentous day," McGraw said after Ogunbowale scored 25 points on 11-of-19 shooting to become Notre Dame's all-time leading scorer, passing Skylar Diggins-Smith. "I'm really happy for Arike - she didn't waste any time and keep us in suspense too long. But our game plan was high-low (with Shepard and Turner) and to really exploit that."

"It's certainly a blessing, especially with all the great players who have come through this school," said Ogunbowale, who received a pregame message from Diggins-Smith, who is in Dallas awaiting the birth of her first child. "I just wanted to focus on the game, not worry about (the record) and get the win."

The Irish (25-3, 12-2 Atlantic Coast Conference) got more than a win. They moved into solo possession of first place in the ACC, a half-game ahead of Louisville, a team they beat on Jan. 10, and both teams got help from Virginia Tech, which beat the other two-loss ACC team, No. 14 Miami, 73-65.

Ogunbowale entered the night needing 11 points to match Diggins-Smith, who played for McGraw from 2009-13 and finished with 2,357 points. The record-setting basket came after a steal by Ogunbowale, who swished a shot from the free-throw line over Duke's Haley Gorecki with 8:49 left in the second quarter. Ogunbowale now has 2,371 points.

"She's the face of our program," McGraw said. "When you look at what she has done for us over the past four years, it's been fun to watch her grow. When she gets the ball in transition, she's so exciting. She's taught me a lot of things about being fearless and letting things go."

Notre Dame had a video tribute for Ogunbowale at the media break following the basket that delighted the Purcell Pavilion crowd of 8,399 which included the Ogunbowale family from Milwaukee.

Miela Goodchild scored a career-high 26 points with the help of a school-record eight 3-pointers to lead Duke, which became the first Notre Dame opponent to have a run of 10 points or more this season. Leaonna Odom scored 12 points and Jade Williams 10 as Notre Dame held Duke leading scorer Gorecki to six points, 12 under her average.

"We didn't have any illusions about stopping (Ogunbowale) tonight," Duke coach Joanne McCallie said. "Her legacy is long and still going. When Notre Dame plays like this, it's a cut above everyone else. Ever since they lost to Miami, they've been a different team and gone back to the basics. They are using everybody, including their posts, a little more."

Duke: The Blue Devils, whose last victory was an 85-69 triumph on Feb. 7 over the same North Carolina team that beat Notre Dame 78-73 on Jan. 27 in Chapel Hill, had just eight players dressed because of injuries. McCallie's squad shot just 39.3 percent (11 of 28) in the first half and just 28.6 percent (4 of 14) in the second quarter and committed 12 turnovers. But McCallie was pleased with the shooting effort of Goodchild, a freshman from Australia who scored her 26 points on 9-of-17 shooting, including 8-of-14 from beyond the arc.

"Miela showed incredible character playing against a team that was trying to hunt her defensively with different defenders," McCallie said. "Miela found a way to be out there and attacking."

Notre Dame: Coming into the game trailing Diggins-Smith by 11 points, Ogunbowale made sure she wouldn't have the record on her mind when she scored 10 points in the first quarter on 4-of-7 shooting, including 2 of 3 3-pointers. After her first basket, however, she came up with a steal, raced down the floor and missed a layup.

"I wasn't focused on that," Ogunbowale joked. "But I got it back."

Notre Dame: Monday at No. 18 Syracuse.