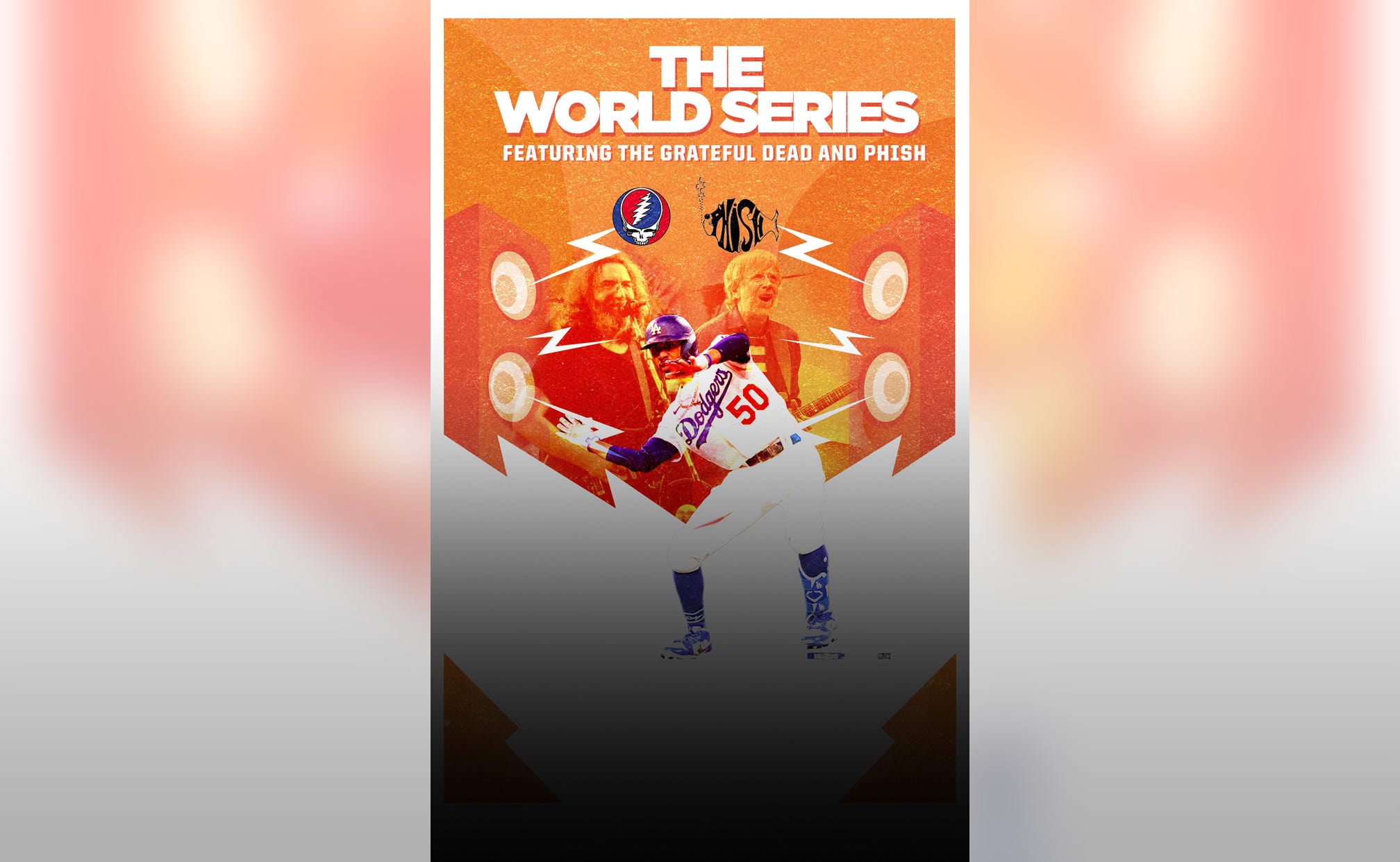 previous story
Stuck in Neutral
next story
Can The Ravens Weather The Steelers?
Major League Baseball

“The World Series is goin’ on as I write this. And, needless to say, my phone is lighting up.” – Bob Weir, Grateful Dead founding member.

On Tuesday night, the Los Angeles Dodgers’ Game 6 victory over the Tampa Bay Rays ended a 32-year title drought, gave the City of Angels a second major sports championship in the month of October, capped off an enthralling, tactical tussle and closed out arguably the wildest and weirdest baseball season we’ve ever seen.

It also, for now at least, brought down the curtain on an accompanying frenzy of online and social media activity among the fanbases of two passionately-supported bands for whom the Series became not just about crowning a new baseball champion, but also a chance to bend their ears to an undulating track list of their favorite tunes.

You don’t find Grateful Dead and Phish hits in today’s Top 40. They’re way more eclectic, permanent, and timeless than that. The former started in 1965 and its spirit is still going strong 25 years after the death of the iconic Jerry Garcia. Grateful Dead represents, in no particular order: a band, a social movement and the conduit for a massive group of traveling friends to congregate at shows of the group’s enduring offshoots and descendants.

During its years of constant touring, the Grateful Dead played more than 2,300 concerts – successor Dead & Company still tours with John Mayer taking the Garcia role – and the lingering loyalty may stretch beyond what even the most fervent sports fan can muster.

Phish, which started in Burlington, Vermont, has also carried the torch of “jam” music for more than 35 years, and offers an equally communal experience that borrows from beatnik culture and forges the same kind of bond among aficionados. “Phans” collect the number of shows they have been to like a badge of honor. Supporters of both bands like to boast that “we are everywhere.” You know several, you just might not know it.

So when a small collection of devout disciples of both bands earned their way into positions at FOX Sports where they had an impact on music selection, well, there could only be one outcome.

“The music has the right kind of riffs and produces the right kind of feeling,” FOX Sports senior vice president of production and talent development Jacob Ullman, a Grateful Dead fan since childhood, told me. “Few other bands would attract that kind of reaction from their music being played through a telecast. It is sports-meets-music-meets-fandom, in the coolest kind of way.”

Music from the bands has been played on television sports broadcasts for years. The smooth rhythms lend themselves beautifully to bumpers heading into commercial breaks and slow-motion replays.

Yet never has there been more jam music, which can be loosely described as a fusion of rock, folk, bluegrass and other elements, in televised sports than in recent times. During the World Series, FOX Emmy-winning chief baseball audio engineer Joe Carpenter – an avowed Deadhead who has been to more than 150 shows – played a significant amount of Grateful Dead and Phish numbers.

Jake Jolivette, a devoted Phish fan, has had a similar effect on Thursday Night Football broadcasts, and both men have been encouraged by Ullman and associate director Bryan Biederman to continue the trend.

“I get a kick out of it whenever I hear our stuff,” Phish keyboard player Page McConnell said. “I text the band right away to let them know.”

Meanwhile, each time a song comes on, most typically during a break between innings, fans of the two bands would immediately take to Twitter, Facebook and various message boards. Both Grateful Dead and Phish trended on Twitter during the World Series. Carpenter quickly realized that his choices were being scrutinized and it added a level of pressure.

“It started out as a selfish kind of thing,” Carpenter said. “I would request permissions for songs by bands that I liked to listen to. But then I began to see that it worked great on the broadcast and then that a lot of people were talking about it. I had to make sure I got it right with the choices, and that I didn’t repeat.”

Repetition is almost like a cuss word in jam music circles. Grateful Dead and Phish performances are famed for the boast that no two concerts are the same. If you haven’t been to one, you won’t find lip-synching teenagers, some athletic backup dancers and a bunch of pyrotechnics. It is a true musical performance, and the fan bases analyze each one and comment upon them expansively.

In that sense, Weir says, there is a parallel with athletic competition.

“Like in sports, if you don’t know what’s coming next it puts an edge on things and kind of brings the colors out,” Weir said. “That’s been pretty much the way we’ve gone about making music for over half a century.

“Like in a game, a given night’s show can turn from light to dark and back again at a moment’s notice and there you still are – on the field or onstage – and you just have to roll with it. Everything can change but you’ve still got to just do your best and pull it together. I love that.”

The most famous sports Deadhead is basketball Hall of Famer Bill Walton, who took his title-winning Boston Celtics colleagues to a show (where they sat on stage to watch) in 1986. In a conversation you wish you were a fly on the wall for, Larry Bird and Garcia bonded over a discussion about how to find ways to perform at the highest level, night in, night out.

On the field, baseball’s greatest showcase might have had several alternative endings to how it actually turned out. What if Blake Snell hadn’t been lifted by Rays manager Kevin Cash? What if that insane ending to Game 4 hadn’t happened? Or if Clayton Kershaw had performed like his prior World Series outings instead of the lights-out regular season guy we are used to?

Yes, it might have looked different, but it was always going to have a certain sound to it. Years ago, Carpenter was urged to play more contemporary chart music on various broadcasts, before a realization that such tunes and tones were not necessarily the right fit for sports’ inimitable flow.

Nowadays, he has essentially free rein and thus, he and Jolivette have become unwitting celebrities in the jam music fan sphere.

Ultimately, for all the additional impact the songs have when they become part of the televised production and the game-within-the-game it has spawned, the whole thing would fall flat if it wasn’t an appropriate fit.

Weir remembers what he thought when he first heard some of his music on sports TV, during the NBA playoffs in the early 80s.

“It sounded pretty right,” he said … and it still does.