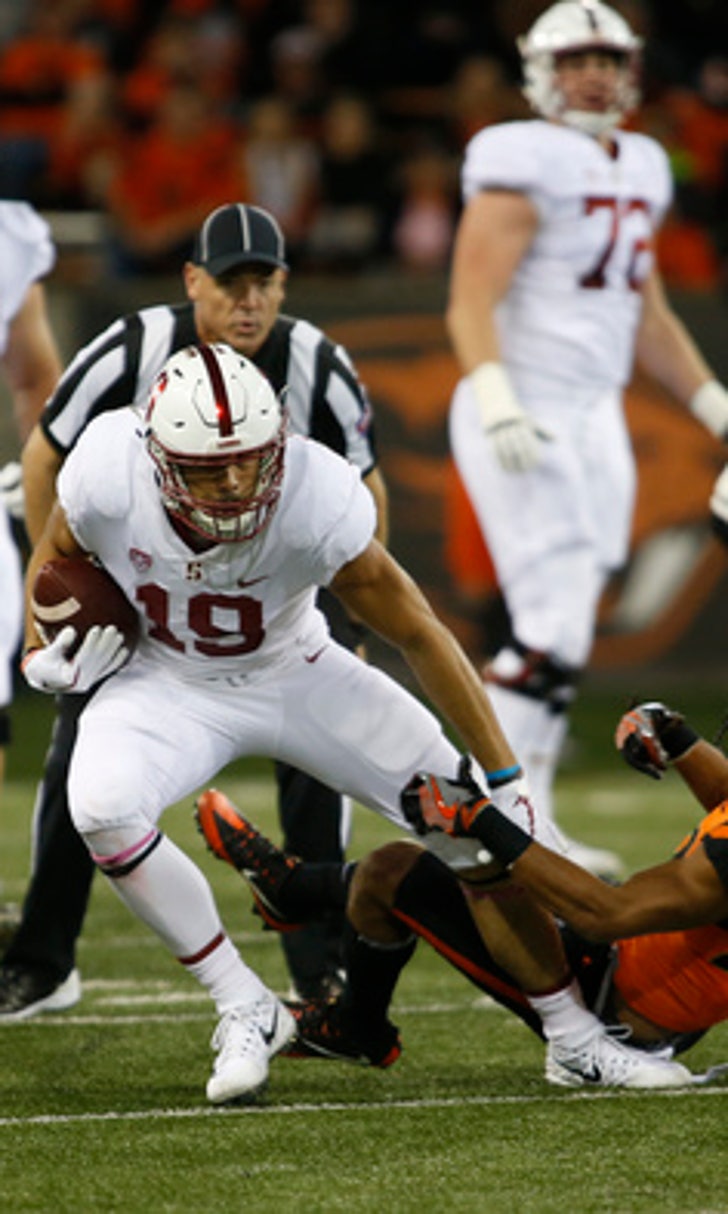 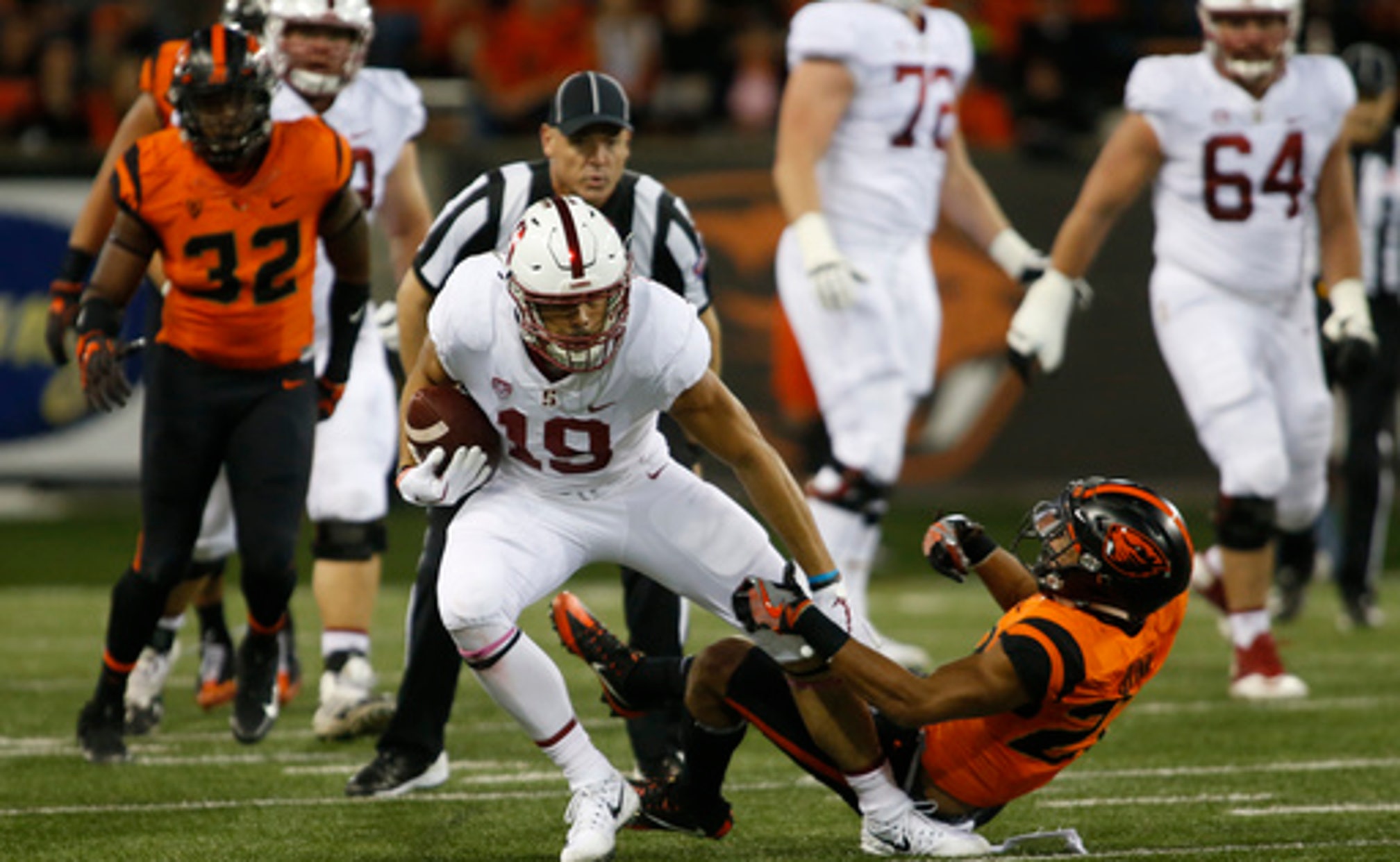 Keller Chryst threw a 3-yard touchdown pass to JJ Arcega-Whiteside with 20 seconds left to give the No. 20 Cardinal a 15-14 come-from-behind victory over Oregon State on Thursday night.

Love, the nation's leader with an average of 198.1 yards rushing per game, tweaked an ankle against Oregon on Oct. 14. The Cardinal (6-2, 5-1 Pac-12) announced that Love would sit out about 90 minutes before the start of the game in Corvallis.

Harrison Phillips recovered an Oregon State fumble to get the ball with 2:30 left. Stanford went for it on fourth-and-10 on the Oregon State 40, with Chryst hitting Kaden Smith with a 25-yard pass to keep the drive alive.

Chryst found Arcega-Whiteside with the fade in the end zone but the 2-point conversion failed. Oregon State got the ball back but the Cardinal intercepted Oregon State quarterback Darell Garretson's hurl from the Stanford 44 with 3 seconds left.

The Beavers (1-7, 0-5) were playing the second game since the school parted ways with head coach Gary Andersen. Interim coach Cory Hall was the cornerbacks coach.

''Yes, you could say Bryce Love wasn't there, but like I've been telling people, one player does not make a team,'' Hall said, adding that Oregon State's effort shows that ''Beaver football is changing. This is evidence of it.''

Stanford recovered Garretson's fumble at the Oregon State 16 but wasn't able to get closer and settled for a Toner's 33-yard field goal to head into halftime down 7-6.

Stanford was flagged for roughing Garretson on the Beavers' first series of the second half. On the same play, Cardinal cornerback Alijah Holder left the game with an apparent knee injury and inside linebacker Joey Alfieri was ejected from the game for targeting.

The Beavers went on to cap the drive with Thomas Tyner's touchdown run to go up 14-6.

The mistakes continued for Stanford on the next possession, when Oregon State's Omar Hicks-Onu intercepted Chryst's pass. But the Beavers missed a 52-yard field goal attempt that would have extended their lead.

Toner kicked a 40-yard field goal to narrow the score to 14-9 at the end of the third quarter.

A midseason AP All-American, Love has run for 1,387 total yards this season and is averaging 10.27 yards per carry - both also national bests. He ran for 147 yards and two touchdowns in Stanford's 49-7 victory at home over the Ducks.

The Cardinal are facing a challenging stretch, on the road at No. 15 Washington State next week, followed by No. 12 Washington at home.

The leading rusher for Stanford in Love's place was Cameron Scarlett, who grew up in Portland, Oregon, and went to Central Catholic High School - the same school as Oregon State running back Ryan Nall. Scarlett finished with 72 yards rushing.

Chryst completed 16 of 33 passes for 141 yards with the final touchdown and the interception, but Stanford managed just 222 yards of total offense.

The Beavers have played with spirit in the two games since the departure of Andersen. Oregon State challenged Colorado but ultimately fell 36-33 on Oct. 14, five days after the school parted ways with Andersen.

''Disappointed yes, but still encouraged, and still encouraging all our players,'' Hall said. ''The season's not a wash, because any time you're able to line up, put a helmet on and compete, that's always a blessing. That being said I'm proud of our players.''

Stanford: The Cardinal averaged 456.7 yards in total offense going into the game. ... Alfieri's brother Mikey is a walk-on at Oregon State who plays on the scout team. Dad Phil Alfieri played for played for the Beavers in the 1980s.

Oregon State: Nall has moved into 10th place for career rushing yards at Oregon State. He finished with 84 yards against the Cardinal ... The Beavers have an eight-game losing streak in the series.

''It went on the ground, I dove,'' Phillips, a senior said. ''There were four or five sets of hands in there and I just ripped and pulled it out.''

Lurking Or Overlooked?
BYU is 9-0, but they're only 14th in the CFP rankings. And coach Kalani Sitake had thoughts on Breaking The Huddle.
17 hours ago

Tough To Go Against The Tide
Top-ranked Alabama has looked unstoppable. Can rival Auburn find any way to stop the Tide in Saturday's Iron Bowl?
20 hours ago