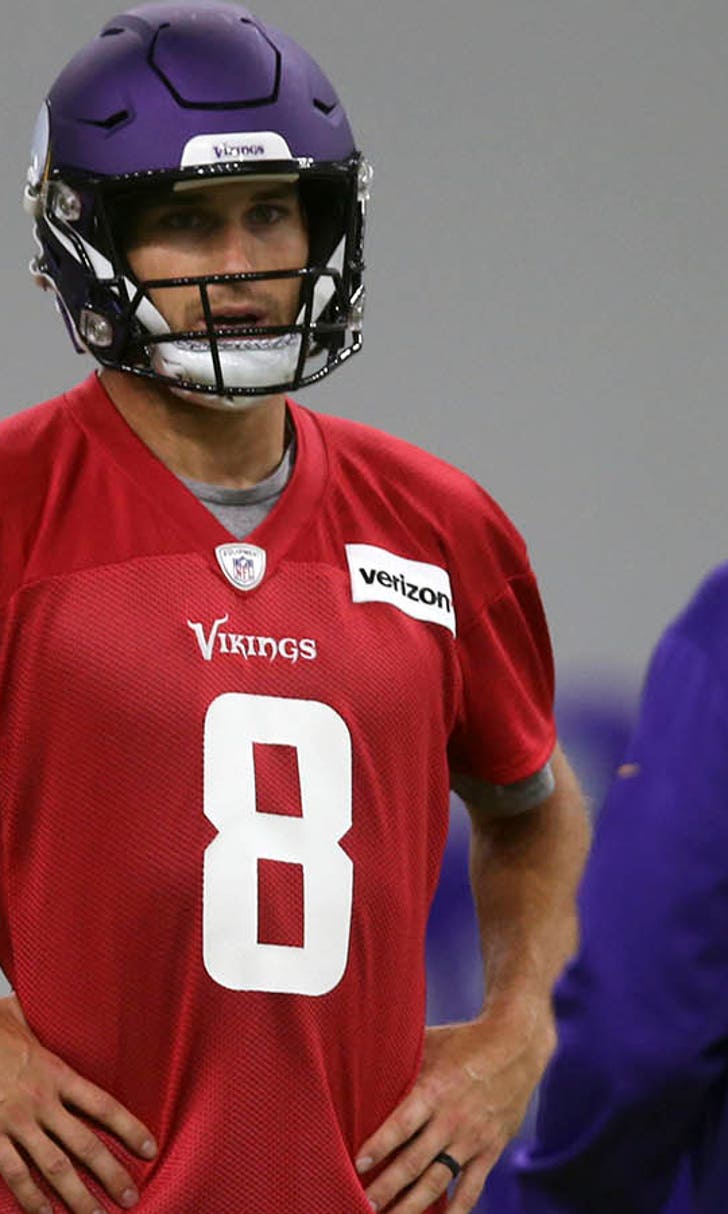 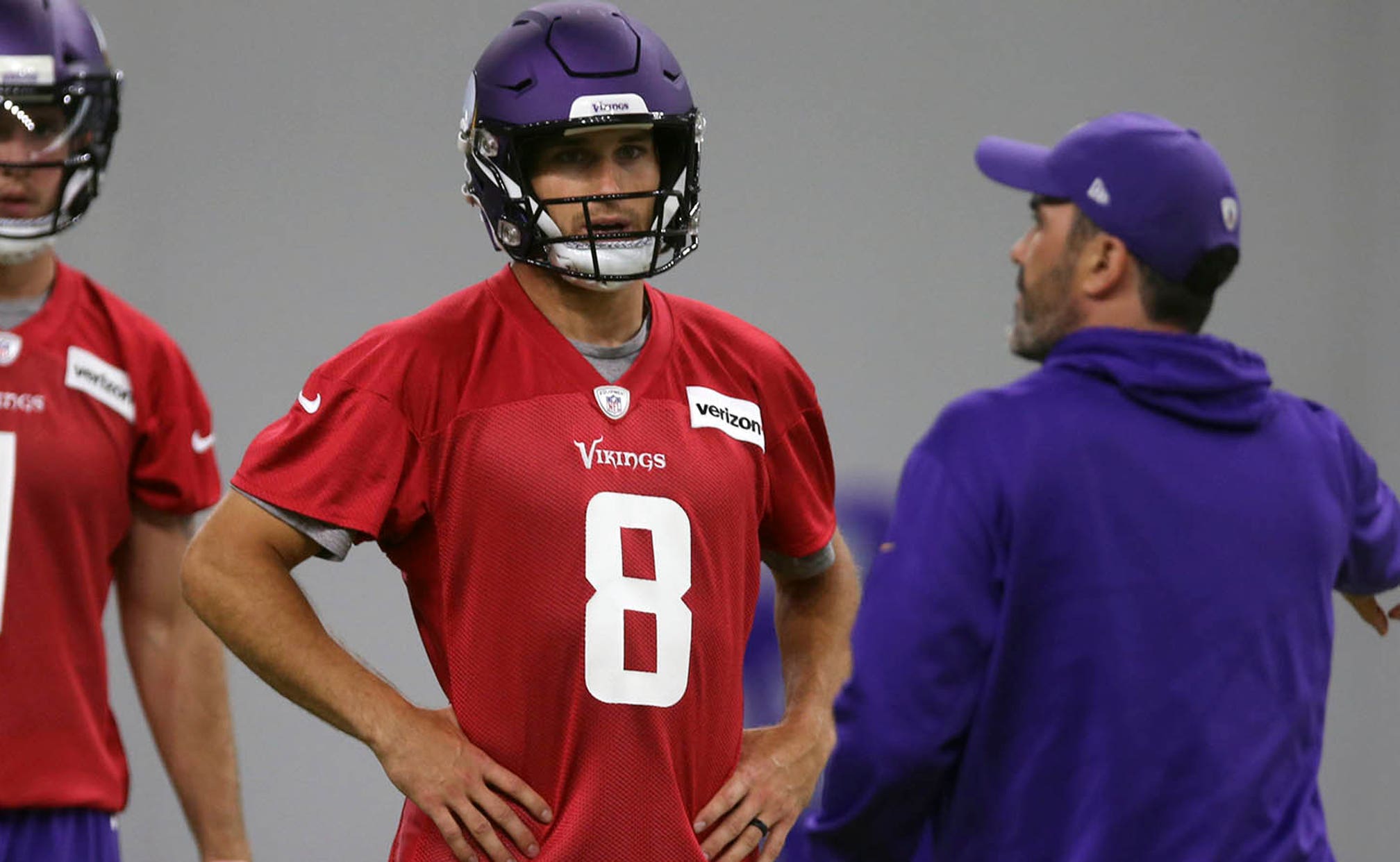 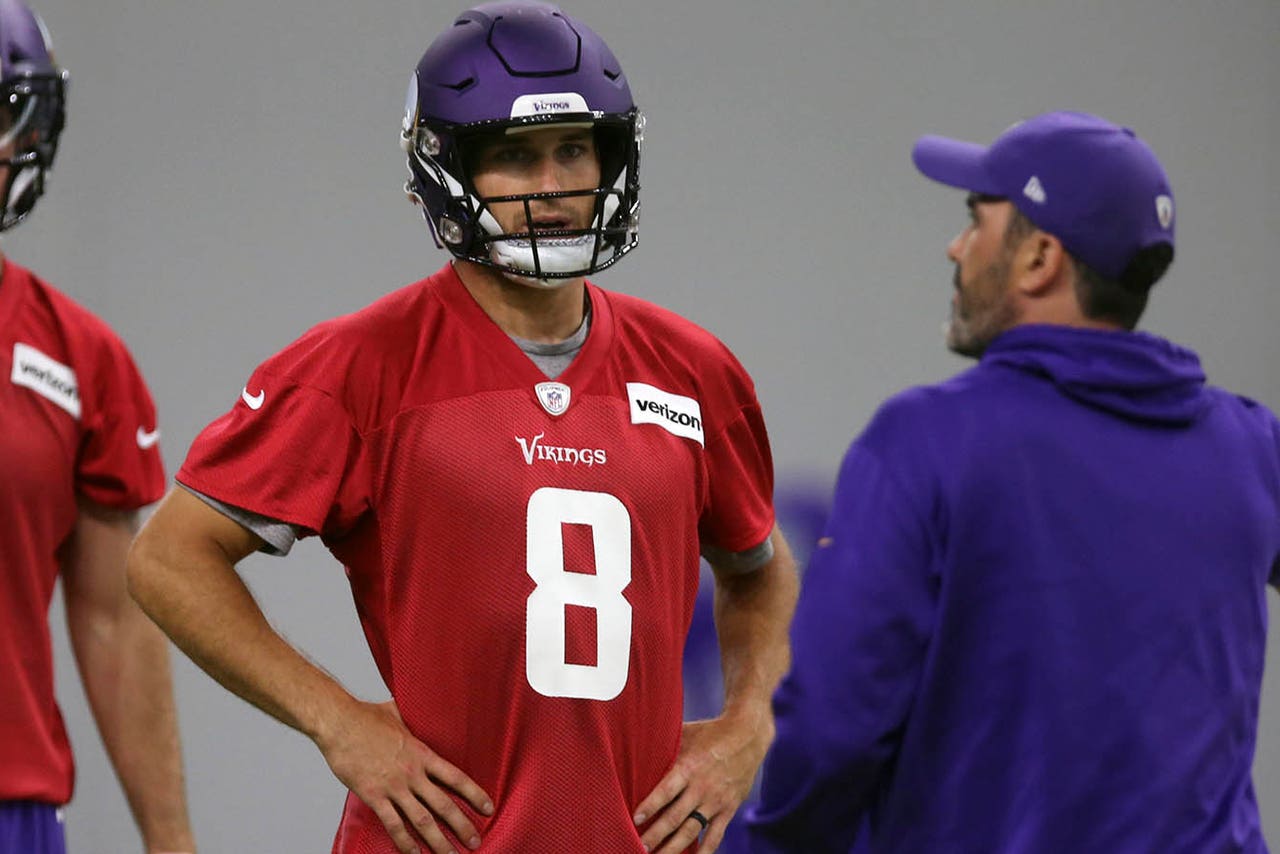 MENDOTA HEIGHTS, Minn. -- There's still so much more for Kirk Cousins to learn about his new coaches, teammates and playbook in Minnesota, a mere 2 months after the newest Vikings quarterback signed his record-setting contract to headline this year's NFL free agency frenzy.

With every full-swing fist pump after a completed pass in these non-contact practices, there's no question that the Vikings acquired a Pro Bowl-level enthusiasm along with Cousins and his skillset.

"I think as a seventh-year player, now you have a little freedom to just be yourself and to not take a back seat and to just be vocal within reason," Cousins said.

"Be a leader, step up, and let your voice be heard. To their credit, the guys have received it well, and it's been fun to just assimilate myself into the offense and into the program."

As Cousins was finishing an interview session with the Minnesota media on Wednesday afternoon during a visit to a local middle school, his teammates called him over to complete their interaction with the kids and pose for one last photo.

He dutifully sprinted across the gym so as not to disappoint or, perhaps, take the razzing. He's the face of this franchise, a responsibility he hasn't shied from, but he's also a carefully spoken and image-conscious player who can understand the importance of not overstepping his bounds.

"Anytime you're new to an organization, you feel your way around a little bit. He's doing that some, but he's leading. He's taking charge," coach Mike Zimmer said amid the pre-teen cacophony in the gym at Friendly Hills Middle School just across the freeway from the team's new headquarters. "He has a lot on his plate right now."

True to his nature as a relationship builder and a meticulous preparer, Cousins hosted wide receivers Adam Thielen and Stefon Diggs at his Atlanta-area offseason home shortly after he joined the team.

"We did get some stuff on the field, learning what he likes, learning how he likes certain routes run, because every quarterback is a little different," Thielen said.

"But I think the biggest thing was just learning his personality, how fun he is to be around and his humor and things like that. It was really good to get a jump on that."

Cousins has also, like it or not, dived right into the extraordinary expectations surrounding the Vikings following their advancement to the NFC championship game last season. The junior-high kids were yet another reminder of this.

"Most of the questions revolved around, `Will we go to the Super Bowl?' and `Will we make the playoffs?' I just throw it back at them saying, `Do you think we will?' and they say, `Yes'. They're confident, and that's a good place to start."

As the Vikings worked through their fifth of nine formal spring practices labeled by NFL parlance as organized team activities, outside linebacker Anthony Barr was back on the field with the team after an absence last week he confirmed was related to his contract status.

Now playing the final season of his rookie contract at a fully guaranteed salary of slightly more than $12.3 million, Barr said he hoped to have a new deal in place before the on-field workouts began. That didn't happen, so he took out an insurance policy to protect his future earnings in case of injury in 2018.

The issue for Barr and his desire for longer-term security is the Vikings also have hefty paydays looming for wide receiver Stefon Diggs and defensive end Danielle Hunter, who are also playing this season on expiring contracts for a team that has plenty of expensive stars.

"My agent is doing a great job, and they're having conversations," said Barr, who was the team's first-round draft pick in 2014. "I don't know too many details on that. My focus is here with the team and getting better."

Sounds a little like the quarterback, dealing with his challenge of taking over a championship-chasing team.

"Everything is new, so I'm just continuing to try to get to where the plays and the reads and the terminology are all instinctual without having to think," Cousins said. "That takes a long time, but every day you can take a step in that process."

The GOATS, the bad and the Jets
Charlotte Wilder recaps a wild NFL Sunday, including a battle of QB legends, a bevy of QB struggles and one hapless, winless team.
4 hours ago
those were the latest stories
Want to see more?
View All Stories
Fox Sports™ and © 2020 Fox Media LLC and Fox Sports Interactive Media, LLC. All rights reserved. Use of this website (including any and all parts and components) constitutes your acceptance of these Terms of Use and Updated Privacy Policy. Advertising Choices. Do Not Sell my Personal Info