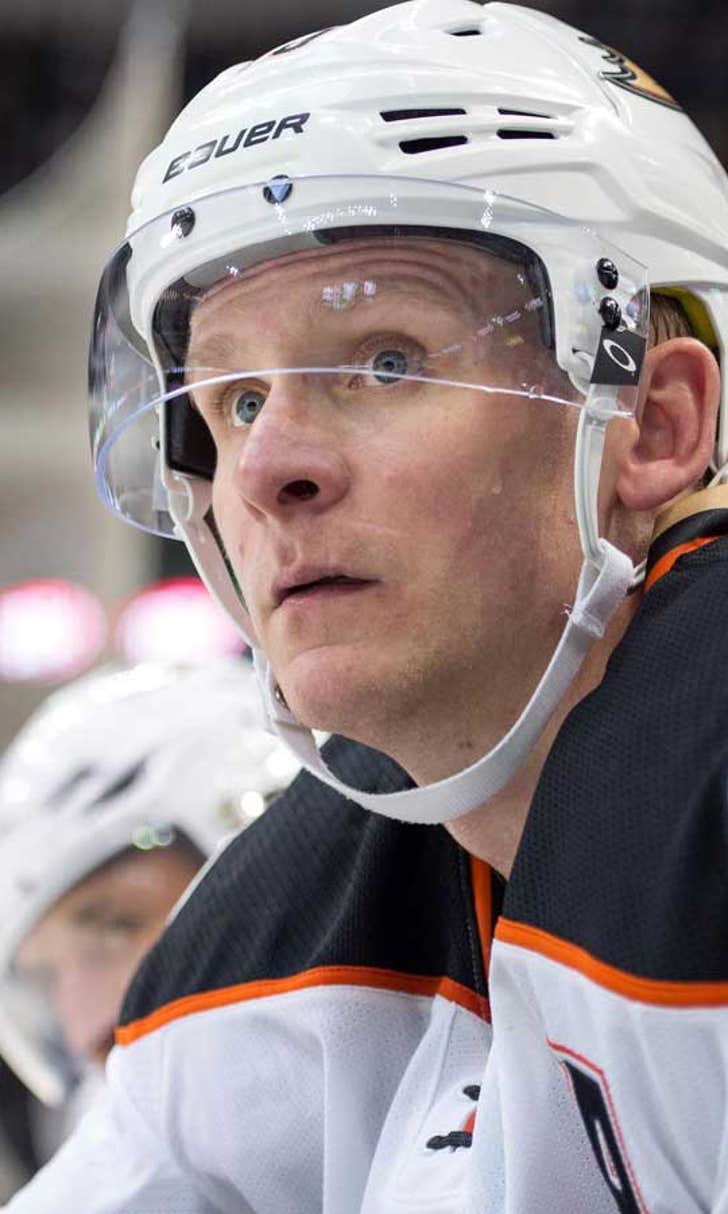 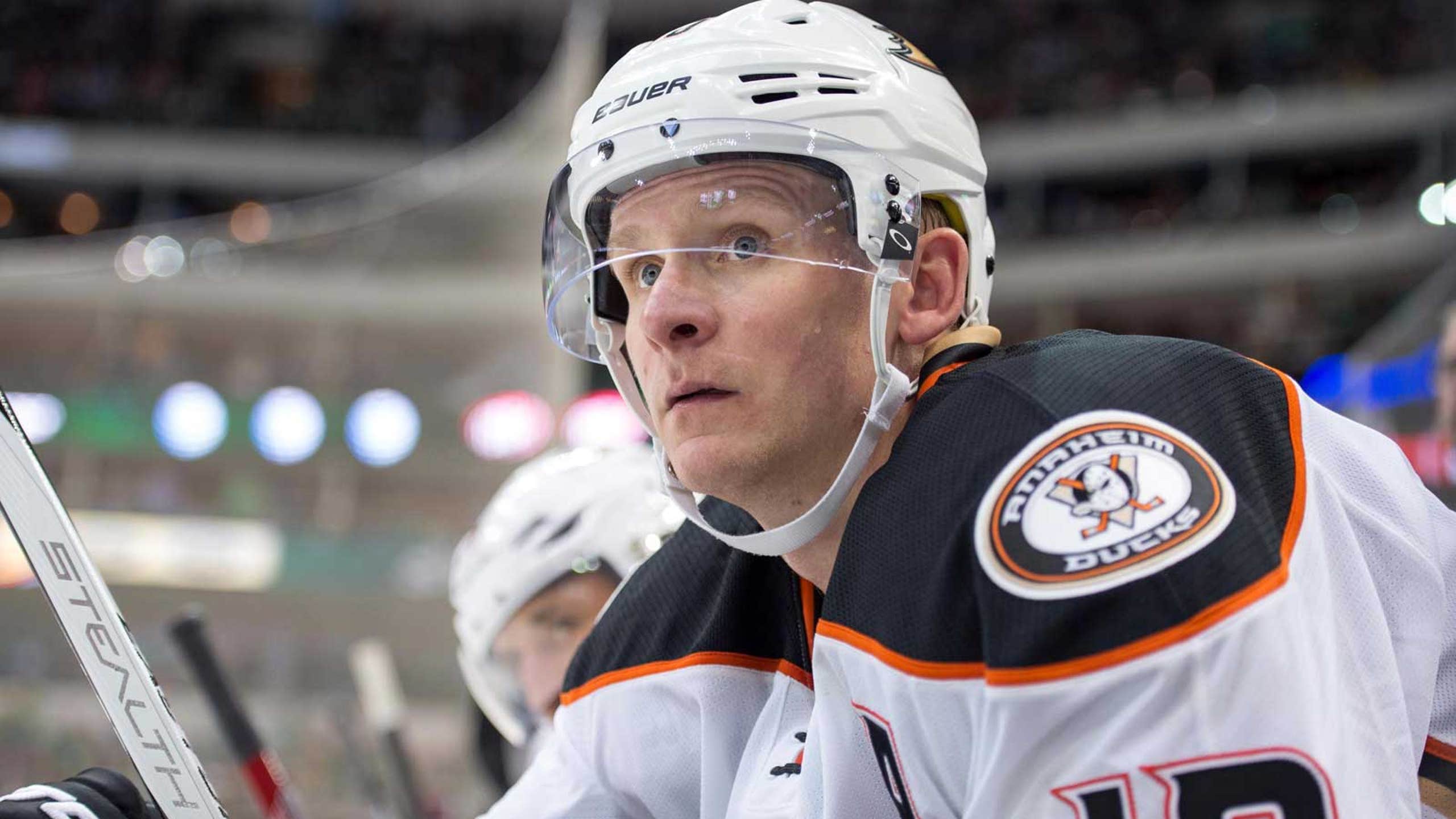 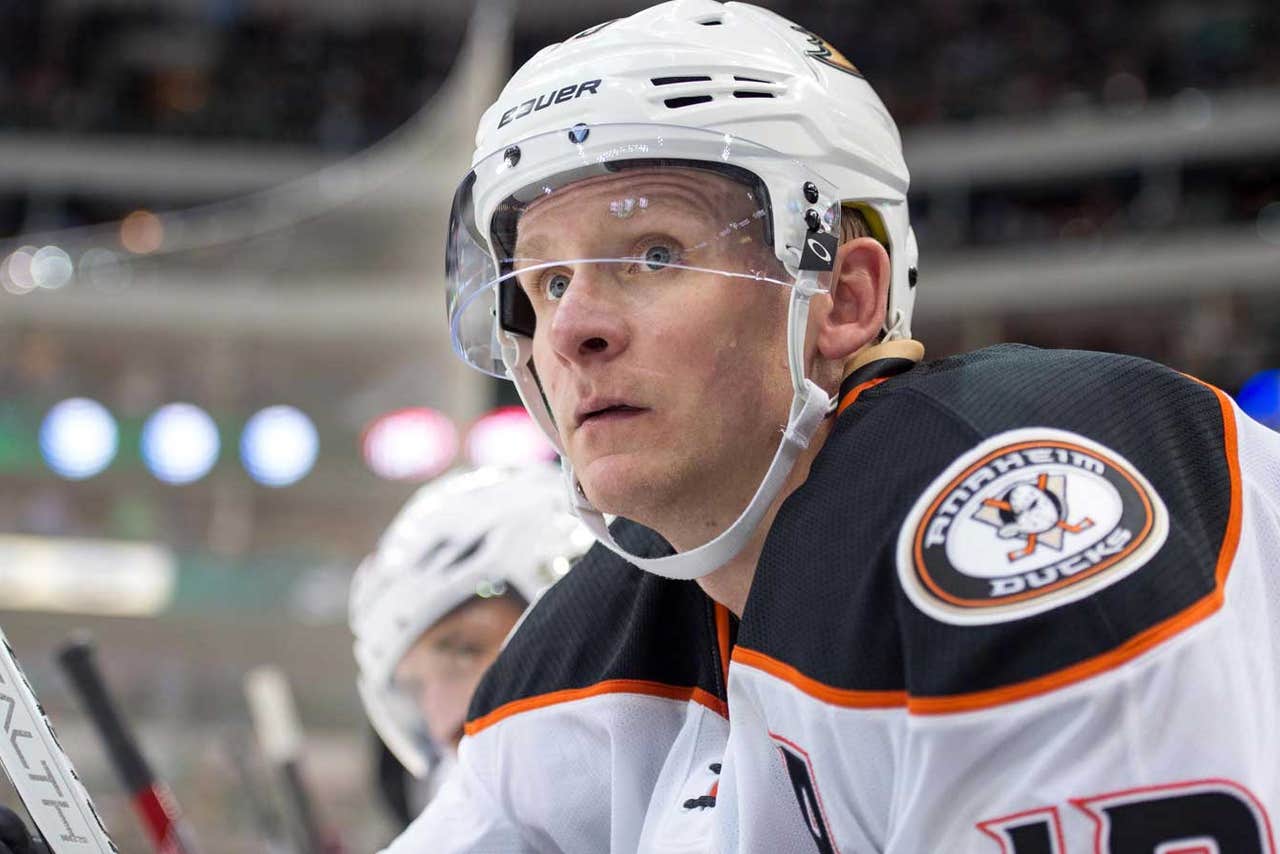 DALLAS (AP) -- Antoine Roussel looked out from under his Dallas Stars cowboy hat to talk about his game-winning goal.

Roussel, a native of France, scored with 1:28 to play, and Dallas rallied to beat the Anaheim Ducks 4-3 on Tuesday night.

His first goal of the season came on the rebound of Vernon Fiddler's shot off Ducks goalie Frederik Andersen's pads.

"A couple of times, (Fiddler) and I went on tight 2-on-1s tonight. It was good to finally get that goal, and obviously it was good to get the win. It's fun to be rewarded."

Roussel is better known as a penalty killer and agitator. Since 2013-14, he has the most penalty minutes (377) of any NHL player.

Stars coach Lindy Ruff said, "Those are great wins for a team, when a guy like that puts it in the back of the net."

Patrick Sharp, Cody Eakin and John Klingberg scored in the second period to tie the score after falling behind 3-0. Antti Niemi had 17 saves to help Dallas improve to 7-2.

Mike Santorelli, Shawn Horcoff and Carl Hagelin all scored in the final 5:16 of the first period. Frederick Andersen finished with 30 saves, including 16 in the third period when the Ducks were outshot 17-2.

"We have a 3-0 lead, and you should not lose a game like that," Ducks coach Bruce Boudreau said. "We can sugarcoat it and say it's ran out of gas, but these guys are professional athletes. There should be no such thing as running out of gas.

"The third period, it looks like we lost our composure because we couldn't make a play to get out of our end."

Anaheim, which has lost eight of its first nine games (1-6-2), came in with just six goals in the opening eight games. The Ducks were shut out for the fifth time in their last game, 1-0 in OT at Chicago on Monday night.

Defense dominated the first period until the Ducks had their first power-play opportunity. Midway through it, with 5:16 left, Cam Fowler passed to Santorelli, who sent a snap shot from the top of the left faceoff circle past Niemi.

The teams were at even strength when Niemi and defenseman Johnny Oduya both went after Andrew Cogliano to the right of the net. He passed back in front to Horcoff, who had an open net for his first goal since last season when he played for Dallas.

Just 14 seconds later, Niemi played a loose puck behind the net, Alex Goligoski gave it up and Corey Perry passed out to Hagelin for the third goal with 50 seconds to go.

"To get off to a good start like that is exactly (what we wanted to do)," Horcoff said. "We played three good periods in Chicago and we kept this going, but we got away from it in the second."

Anaheim outshot Dallas 9-6 in the first.

Sharp, acquired from Chicago during the offseason, scored his first for Dallas on the power play at 7:30 of the second. Benn passed out to Sharp in the slot, and he sent a snap shot past Andersen into the lower left corner.

Eakin scored a short-handed goal, taking a backhand pass from Benn at the edge of the left circle and firing a wrist shot into the net with about 4 1/2 minutes to go. Klingberg's tying goal came about 90 seconds later, when he took a pass from Tyler Seguin in front of the net and beat Andersen.

NOTES Ducks captain Ryan Getzlaf flew back to California, where he is scheduled for a non-emergency appendectomy on Wednesday. He is expected to be out 4 to 12 days. ... Andersen entered the game with an 0-3-2 record despite a 1.71 goals-against average. Anaheim scored only one goal in his first five starts. ... Santorelli became the first Ducks player with two goals this season, and Perry the first with two assists. ... Dallas entered the game with the NHL's third-best power play, with a 30 percent success rate. ... Eakin's goal was the Stars' first short-handed score.