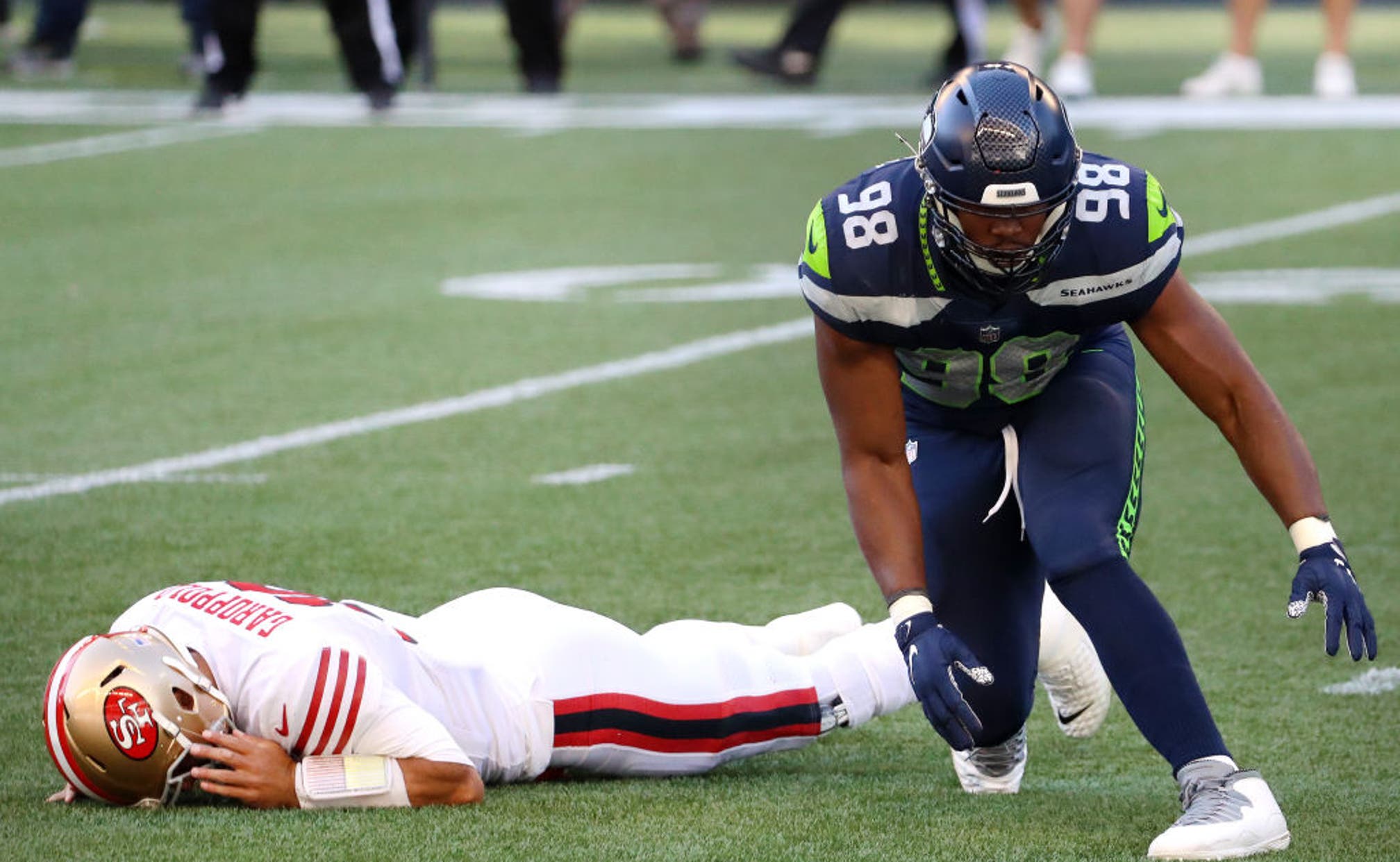 Sometimes, the glass is actually half-empty.

Fresh off of their first Super Bowl berth since the 2012 season, the San Francisco 49ers are spiraling downward, as their injury report only elongates.

Coupled with the injuries to Garoppolo and Kittle, the Niners lost 37-27 to in-division rival Seattle, bringing them to 4-4 on the season and 1-2 in the NFC West, good for last place behind the Seahawks, Arizona Cardinals and Los Angeles Rams through eight weeks.

So, where does San Francisco go from here?

Colin Cowherd wasn't exactly sure of all the steps the Niners need to take, but on Tuesday morning, he thinks he nailed the first one.

"Just because your career can end in one city doesn't mean your career is over ... People reinvent themselves and pivot all the time. Jimmy Garoppolo is hurt again. He's going to miss multiple weeks and I'm just gonna say it now: it's over for Jimmy Garoppolo in San Francisco."

The Niners acquired Garoppolo back in October of 2017, via a trade with the New England Patriots, giving up a second round pick for their new starting quarterback.

His presence was immediately felt, as Garoppolo won his first five starts in San Francisco, and the franchise rewarded him with a five-year, $137.5 million contract in February of 2018.

However, things began to come undone shortly after, when Jimmy G tore his ACL against the Kansas City Chiefs during Week 3 of the 2018 season, sidelining him until Week 1 of the 2019 season.

That 2019 year served as a bounce-back year for Garoppolo and the Niners. They won their first eight games and finished the regular season 13-3. Garoppolo completed 69 percent of his passes and threw for 3,978 yards, 27 touchdowns and 13 interceptions.

The Niners would then beat Minnesota and Green Bay in the playoffs, earning a spot in Super Bowl LIV against Patrick Mahomes and the Chiefs.

And even though San Francisco came up short in the championship game, the future seemed bright for the historically successful Bay Area franchise.

But that light has been dimmed so far this season.

Garoppolo and the Niners dropped their season-opener at home to Arizona, and in Week 2, Jimmy G suffered an ankle sprain that sideline him for two weeks.

His return in Week 5 ended with a 43-17 home shellacking at the hands of Miami, and while the 49ers would earn wins over the Rams and New England Patriots over the course of the next two weeks, Garoppolo suffered a second ankle injury in Sunday's loss to Seattle, and it will potentially sideline him for the rest of the season.

On the year, Garoppolo is completing 67.1 percent of his passes (13th in the NFL) for 182.7 yards per game (31st in the NFL). He's thrown seven touchdown passes and five interceptions in six starts so far this season.

"There are three things, as a quarterback, that will end your career with one team: you're inconsistent – Garoppolo is – the coach has lost faith in you – the coach has – and you can't stay healthy."

Whether Niners coach Kyle Shanahan has lost faith in Garoppolo is yet to be determined.

But if that is indeed the case, as Cowherd surmises, the San Francisco franchise might have to make a decision on Garoppolo's future – and its own – sooner rather than later.

Market Decline
Nothing seems to be trending in the right direction for Carson Wentz and the Philadelphia Eagles. Could a change be imminent?
2 hours ago

Sean Payton Is The NFL's QB Whisperer
Sean Payton has a body of evidence that suggests he knows exactly what he’s doing when it comes to the QB position.
4 hours ago

Commander in Chief
Mahomes and the Chiefs got their revenge Sunday, and proved that even a perfect game plan is not enough to stop them.
9 hours ago

Two-Horse Race
Geoff Schwartz says the Chiefs and Steelers have separated from the AFC pack, and he picks the horse to bet on in the NFC East.
10 hours ago

Mahomes, Chiefs Outlast Raiders on SNF
Patrick Mahomes worked his late-game magic to stun the Raiders and secure a big AFC West win on Sunday Night.
22 hours ago
those were the latest stories
Want to see more?
View All Stories
Fox Sports™ and © 2020 Fox Media LLC and Fox Sports Interactive Media, LLC. All rights reserved. Use of this website (including any and all parts and components) constitutes your acceptance of these Terms of Use and Updated Privacy Policy. Advertising Choices. Do Not Sell my Personal Info