On the latest episode of WWE 205 Live, Tony Nese collided with Danny Burch in a hard-hitting contest. Plus, Raul Mendoza faced Ariya Daivari in a rematch and Joaquin Wilde made his Cruiserweight debut. 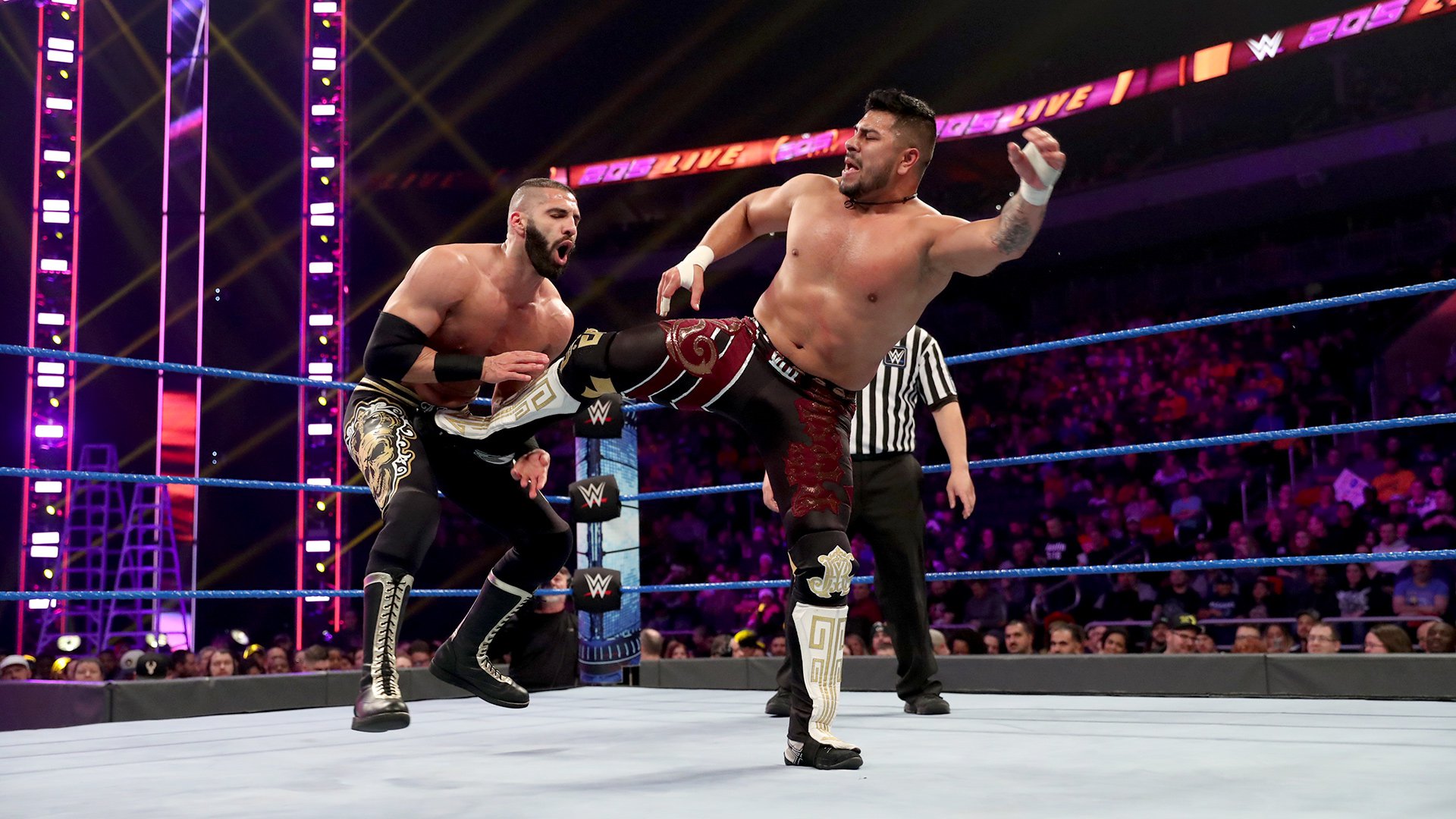 Two weeks ago, Ariya Daivari brought Raul Mendoza’s momentum to a screeching halt with an impressive victory on WWE 205 Live. However, Mendoza has rebounded, and following an impressive win against Cameron Grimes on WWE NXT, he is looking for retribution against The Persian Lion.

An exchange of words and Mendoza quickly putting Daivari on the defensive kicked off the contest. Mendoza maintained pressure on his opponent, forcing him to the outside and charging forward relentlessly with a baseball side. However, Daivari managed to turn the tide by tossing Mendoza into the ring post and taking control of the match.

The advantage allowed Daivari to dish out his brand of punishment, maximizing his aggression and certainly proving he has no love lost for WWE 205 Live’s new crop of competitors. However, breaking free of a hold from Daivari, Mendoza managed to level his opponent with a huge kick to the face, giving him the reprieve he needed to recuperate.

Feeding off the energy of the WWE Universe, Mendoza mounted a high-flying and high-impact offense that left Daivari flattened on the outside. The ever-resilient Daivari refused to stay down, though, countering his opponent with a boot to the face and a frog splash that nearly secured victory.

Continuing to battle back and forth, both Superstars were left in shock at their respective inability to secure victory, and a double cross body collision in the center of the ring left the bout at a stalemate. After trading strikes, Daivari attempted two Hammerlock Lariats but Mendoza countered, rolling up his opponent on the second attempt and securing victory. 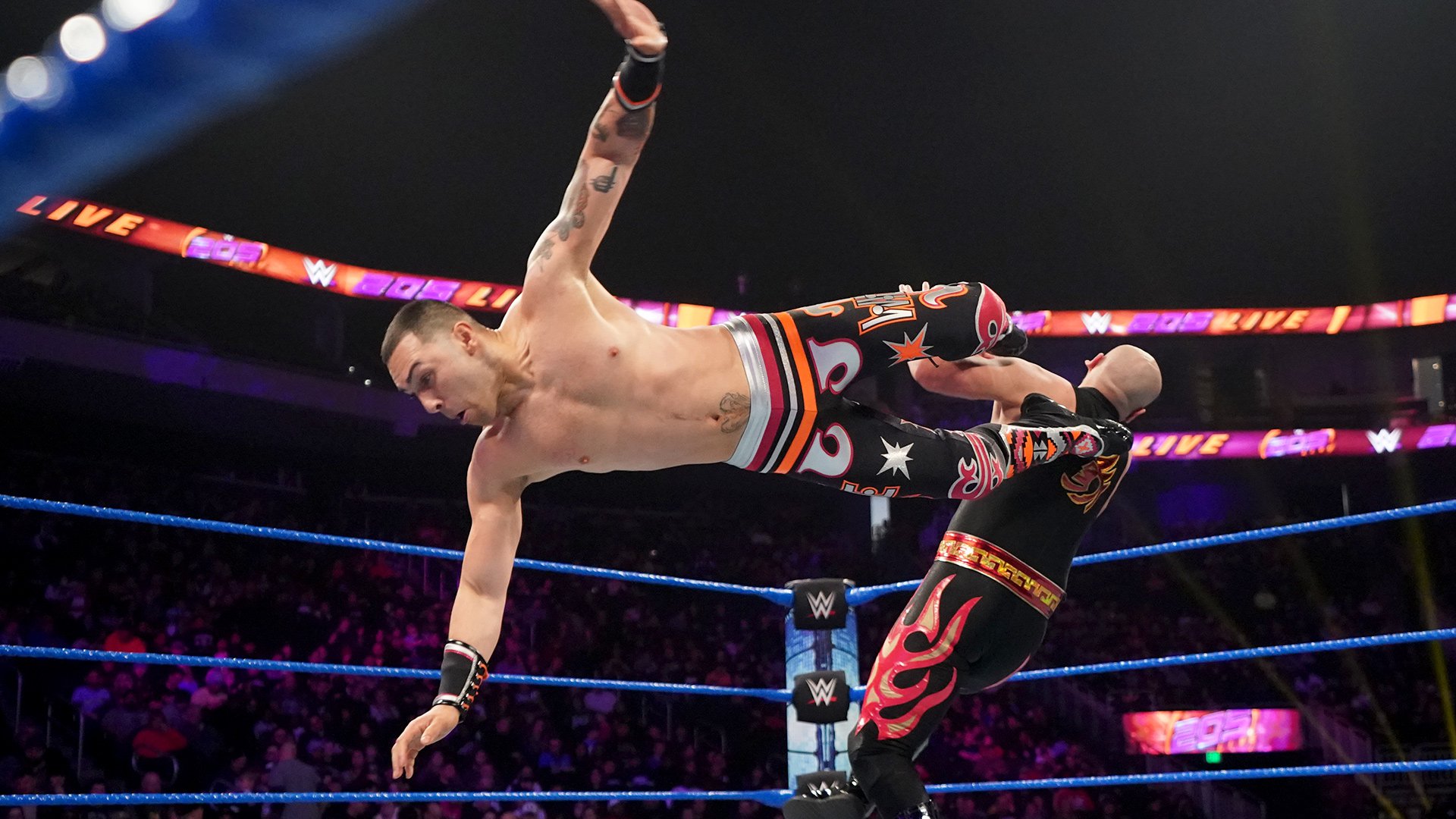 Making his Cruiserweight division debut, Joaquin Wilde made his first appearance on WWE 205 Live against James Tapia. Previously, Wilde made his NXT debut during the NXT Breakout Tournament, but he is well-known amongst WWE and NXT Superstars, including Cesaro and Johnny Gargano.

Energetic and equipped with a diverse skill set, Wilde showcased his abilities at Tapia’s expense, all the while mimicking the sound of a nightclub air horn. Tapia did his best to counter Wilde’s unpredictability, ultimately being ripped off the top rope with a powerbomb before Wilde executed his patented Wilde Thing for the win. 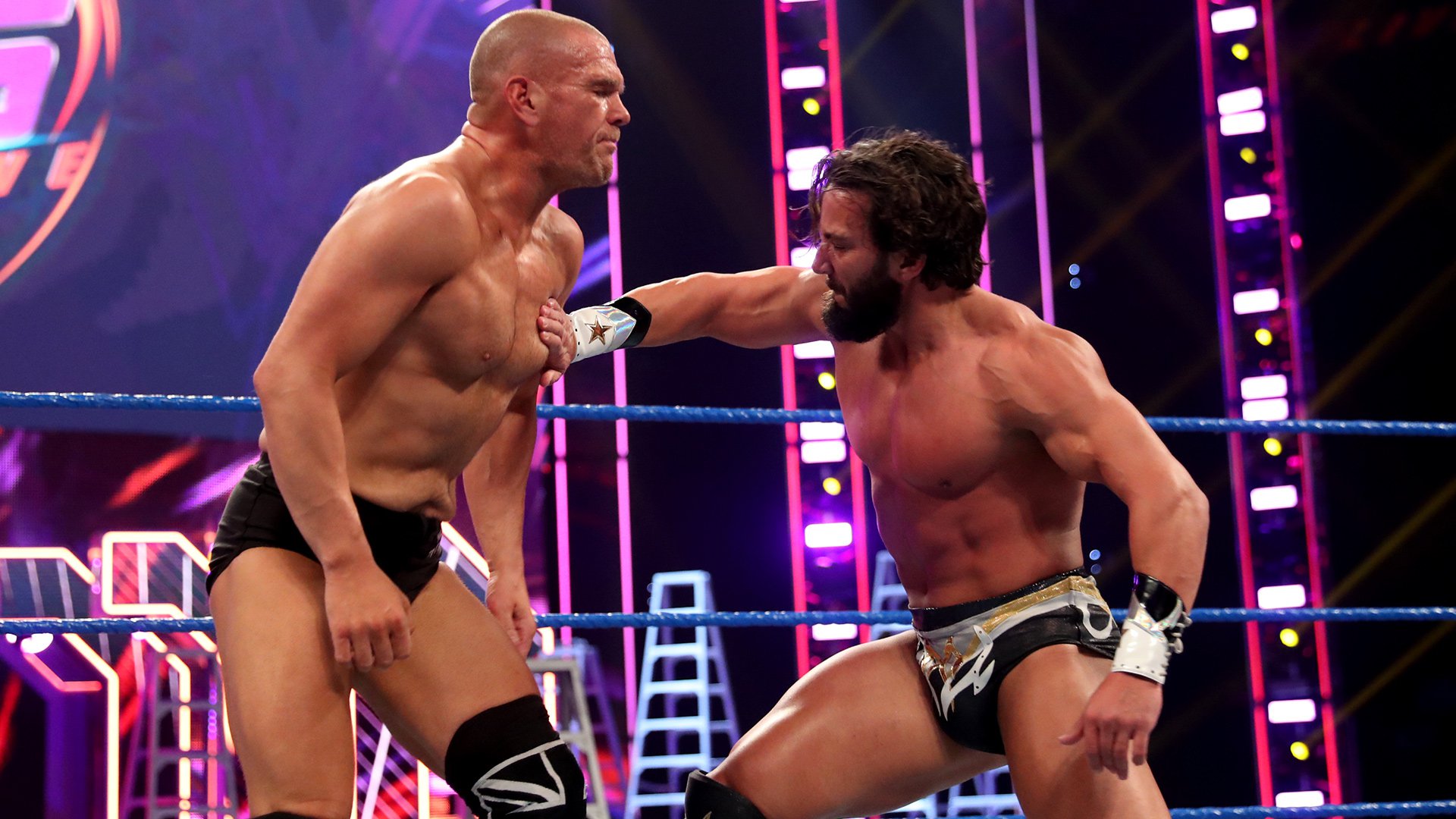 Danny Burch came to WWE 205 Live with one goal in mind – smash his way to the top of the Cruiserweight division. The Strong Style Brit is always looking for a fight and brings a hard-hitting style to the ring. Despite his match against Lio Rush ending in a disqualification last week, Burch impressed nonetheless. Tonight he tests his intense demeanor and ability against the speed and power of former NXT Cruiserweight Champion Tony Nese.

Following a brief lockup to kick off the match, Nese took a moment to show off his physique in front of an unimpressed Burch. From there, the two competitors engaged in a battle of strength ending in a snap mare from Burch who took a moment to mock his opponent.

The Strong Style Brit then zeroed in on Nese’s left arm and hand, keeping The Premier Athlete firmly on defense. Trying to utilize his speed and agility, Nese attempted to counter but Burch remained one step ahead, pulling his opponent back to the canvas and maintaining an iron grip on multiple occasions.

Nese didn’t have an answer for his opponent’s relentlessness as he was chased around the ring and clobbered with European Uppercuts. However, The Premier Athlete managed to turn the tide, pulling Burch off the top rope. With momentum finally in his favor, Nese nearly secured victory with a moonsault, but maintained pressure following Burch’s kick out.

Unwisely Nese took his eyes off his opponent to taunt the WWE Universe, leading to a huge missile dropkick to level the playing field. Unloading fists of fury and hard elbow strikes on Nese, a fired-up Burch nearly scored victory following a huge right-hand strike.

Neither competitor backing down, Burch leveled Nese with a headbutt, but as Nese recovered and ascended to the top rope, The British Superstar struck back and nearly made his opponent tap out with a crossface. Nese managed to escape and flatten Burch on the outside. Rolling his opponent back in the ring, The Premier Athlete attempted a 450 splash but missed and once again was caught in the crossface.

Overpowering Burch, Nese attempted to roll him up but Burch countered only to once again experience the pure strength of The Premier Athlete who lifted his opponent and tossed him into the turnbuckle. Without skipping a beat, the former NXT Cruiserweight Champion executed the Running Nese before scoring the pinfall.

Mendoza gets another chance to beat Daivari 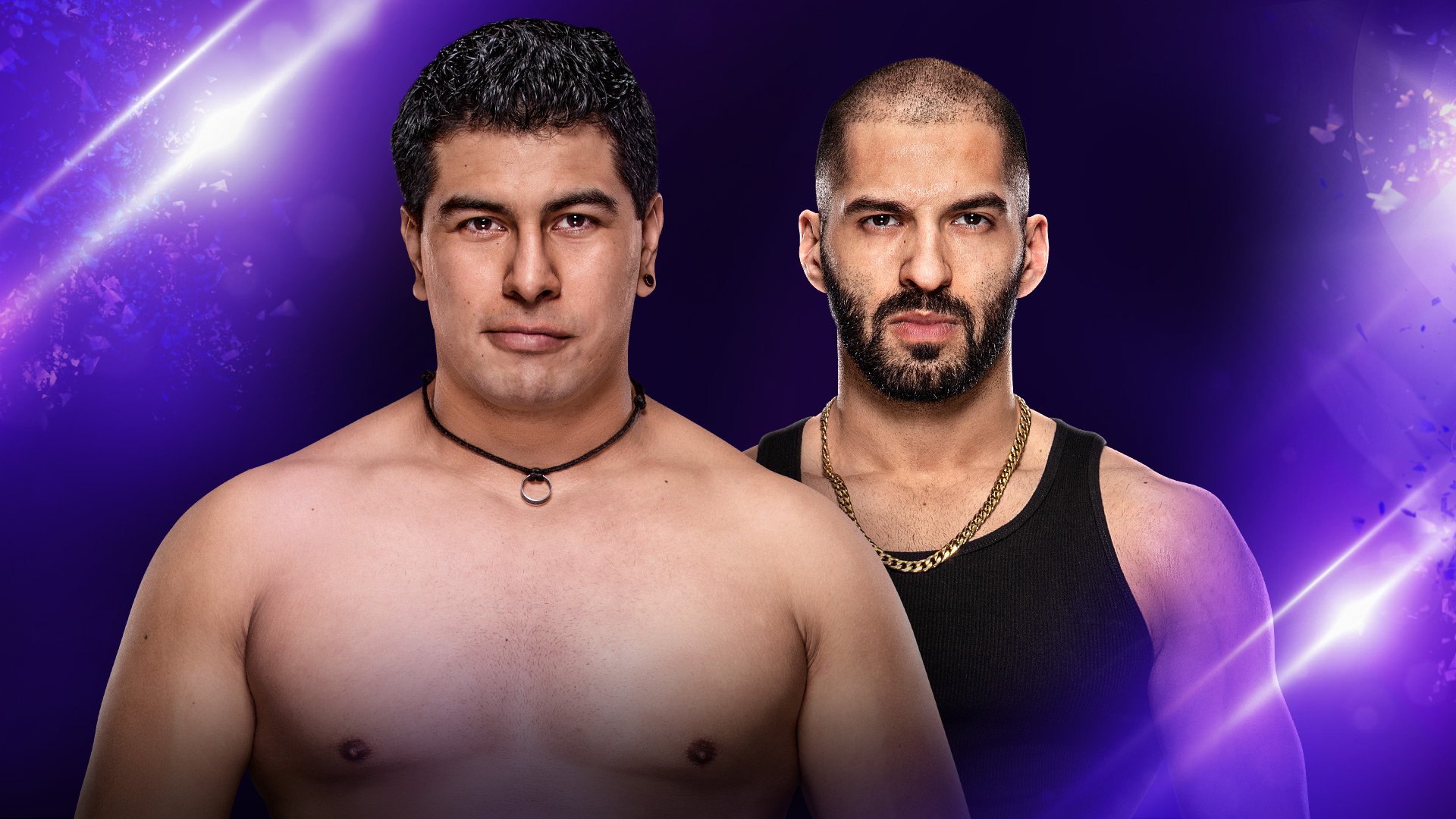 Two weeks ago, Ariya Daivari made a powerful statement and defeated WWE 205 Live newcomer Raul Mendoza. The highly competitive match set back Mendoza’s momentum, but gave Daivari a much need boost as he takes a great deal of pride in being a WWE 205 Live original.

However, this past week on WWE NXT, Mendoza began to correct his course with an impressive victory against Cameron Grimes. Now, Mendoza has reset his focus on Ariya Daivari.

Can Mendoza get retribution for his loss two weeks ago and continue to rebuild his momentum or will The Persian Lion prove a second time that WWE 205 Live is his territory?

Who will showcase the premier style? 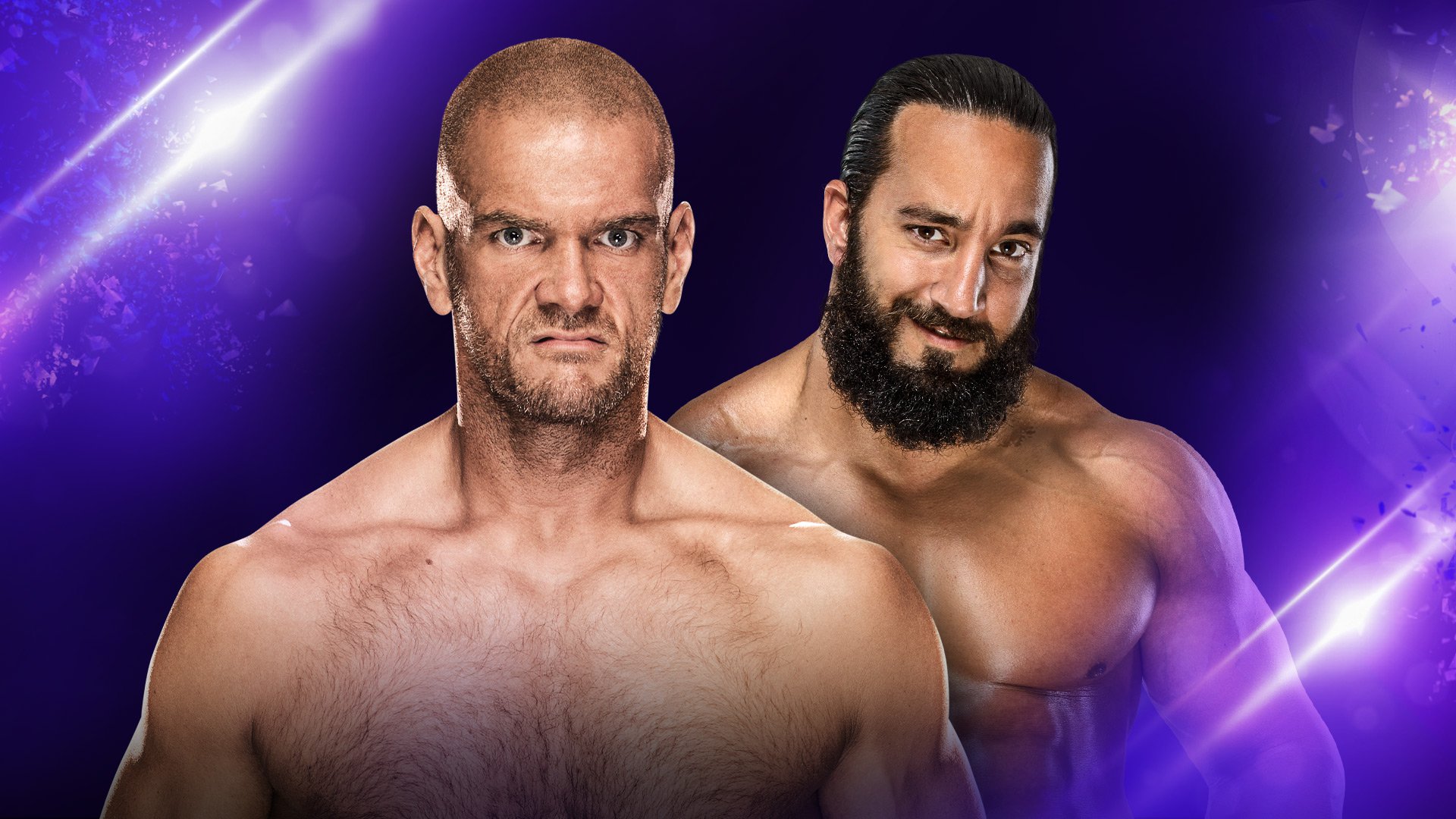 Another Superstar who takes a great deal of pride in being a WWE 205 Live original is former NXT Cruiserweight Champion Tony Nese. Just like Daivari, Nese wants to ensure that any new Superstars competing on the purple brand show him the respect he feels he deserves.

However, tonight The Premier Athlete’s fast-paced and powerful style is set to clash with the smash mouth and hard-hitting Danny Burch. Like many new faces to WWE 205 Live, The Strong Style Brit is looking to make a huge statement, especially after an impressive showing last week against Lio Rush.