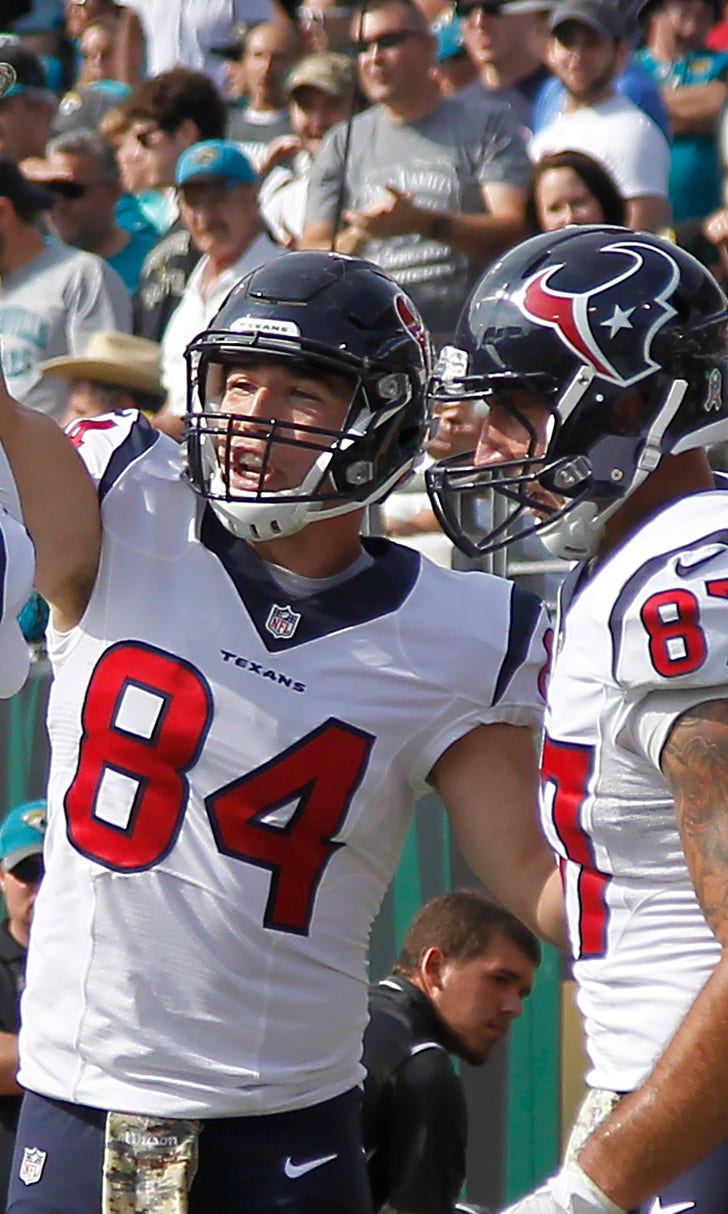 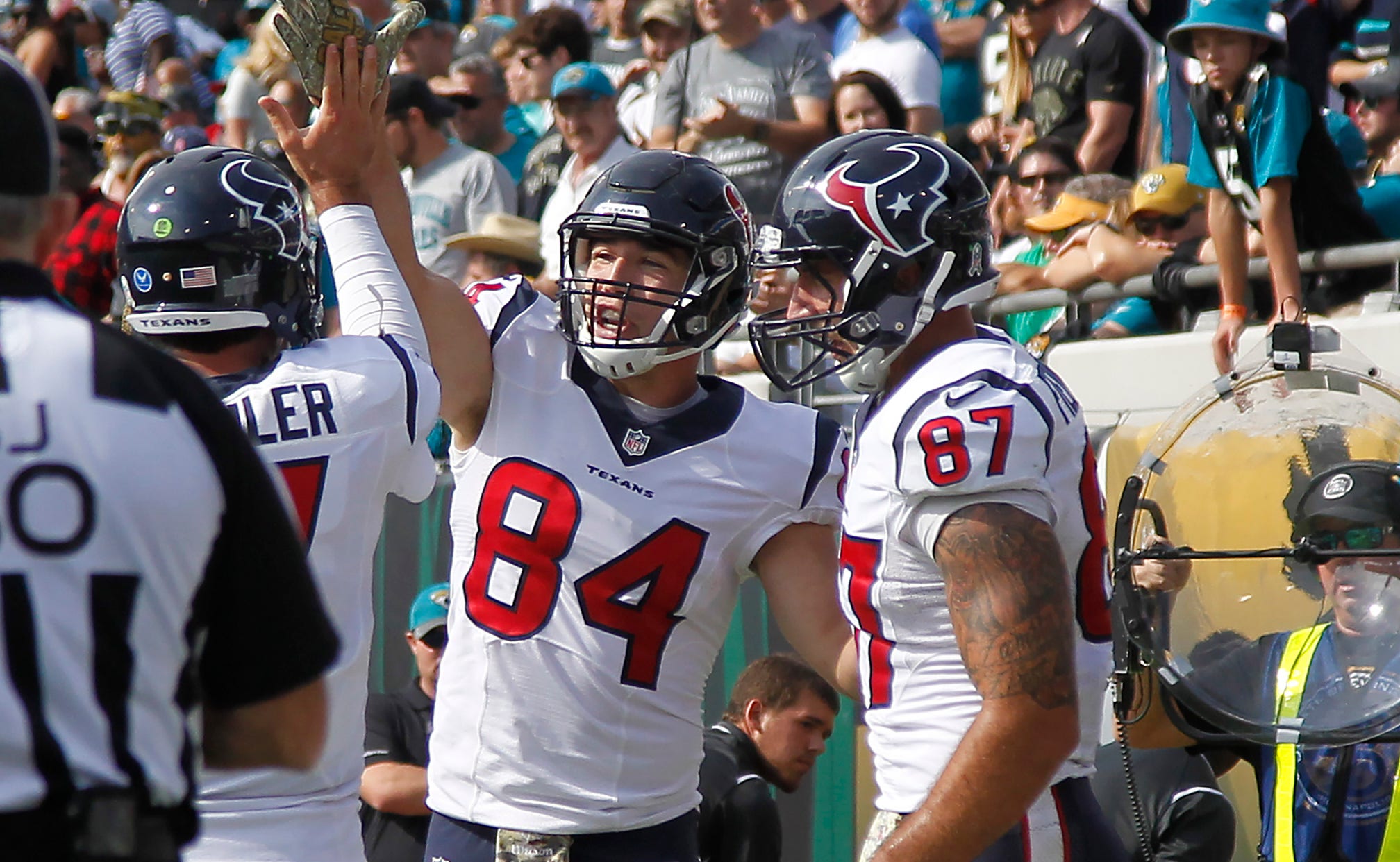 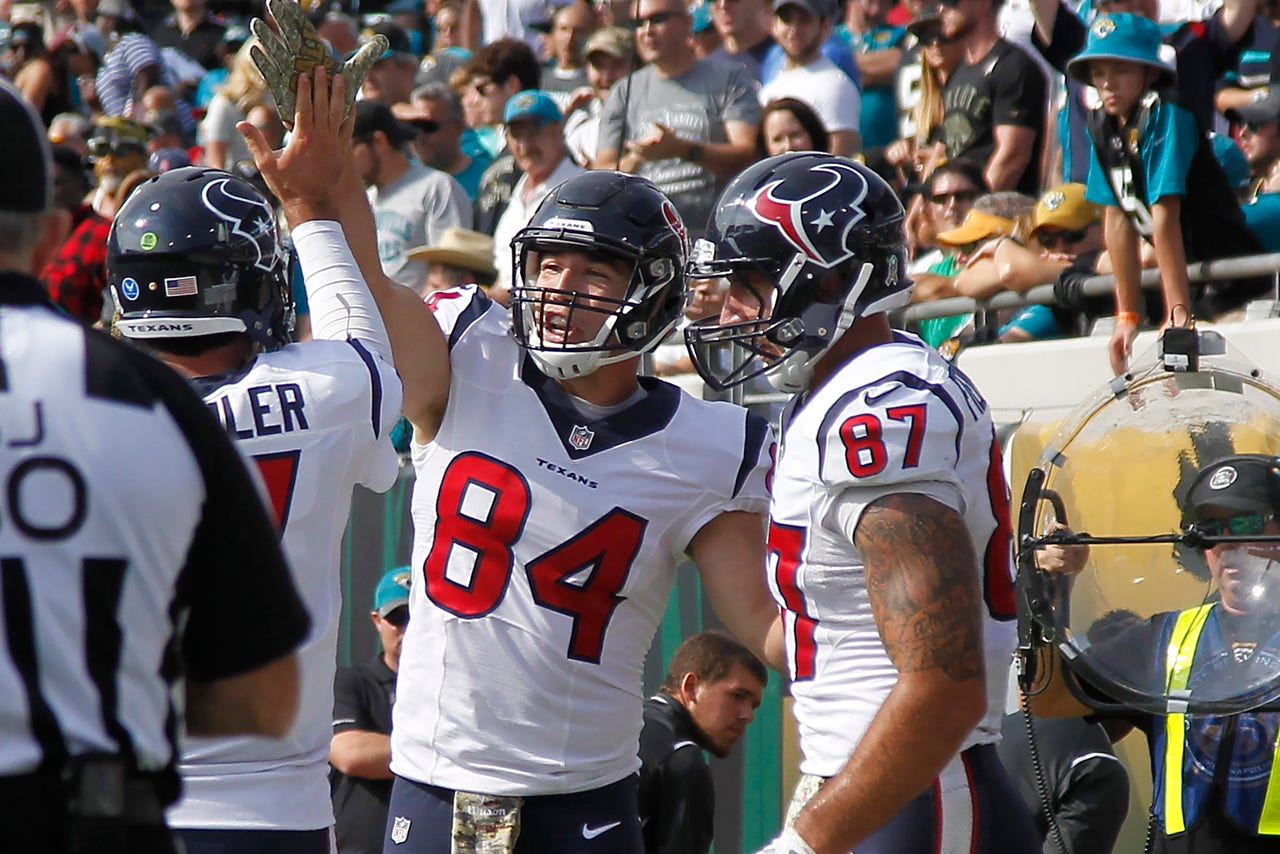 The Texans (6-3) scored on offense and defense and set up another score with special teams, a complete team effort that led to their first road win of the season and kept them perfect (3-0) against the AFC South. They won their fifth in a row against Jacksonville.

The Jaguars (2-7) lost their fourth straight and fell to 0-4 at home. Coach Gus Bradley's team rallied late, with Blake Bortles hitting Allen Robinson for a touchdown and again for a 2-point conversion.

But the Texans converted a third-and-5 play with 2 minutes to play, essentially ending the game. It dropped Bradley's record to 14-43 in four seasons and prompted even the most loyal supporters to question why owner Shad Khan hasn't made a change.

Houston had been downright dismal on the road this season, scoring just one touchdown in lopsided losses at New England, Minnesota and Denver. The Texans found Jacksonville to be much more hospitable, especially on the opening drive.

On the fifth play of the game, Jackson stepped in front of Allen Hurns, tipped the ball up, bobbled it, secured it and sauntered down the sideline before juking Bortles and high-stepping into the end zone.

Osweiler made it 14-7 later in the first quarter with a 1-yard pass to wide-open tight end Ryan Griffin. Punt returner Tyler Ervin did most of the work on Houston's third touchdown, weaving his way for 57 yards and setting the Texans up at the 7-yard line. Osweiler hooked up with Stephen Anderson on the next play.

Nick Novak, who missed two field goals earlier in the game, connected on a 51-yarder with 8:32 remaining that gave Houston some breathing room.

The Jaguars struggled to move the ball consistently all afternoon and added to their lowlight reel in the second quarter when Bortles did the most Bortles thing of his career.

Under heavy pressure and trying to ground the ball near tightly covered running back T.J. Yeldon, Bortles hit Yeldon in the foot. The ball bounced up and landed in linebacker Whitney Mercilus' hands for an interception. It was Bortles' second pick of the day and his sixth in the last five games.

Even though it came against dysfunctional Jacksonville, Houston's victory was somewhat impressive considering how many key players the team was without.

The Jaguars failed once again to score a touchdown on their opening possession, extending the NFL's longest current TD drought to open games.

Jacksonville's streak is now at 23 games after Bortles' interception. The Jaguars haven't found the end zone on their opening drive since Week 2 of the 2015 season against Miami. Since then, they have 17 punts, three field goals and three turnovers -- all interceptions this season -- in their initial possessions. Bortles also threw opening-drive picks against Green Bay and Chicago.