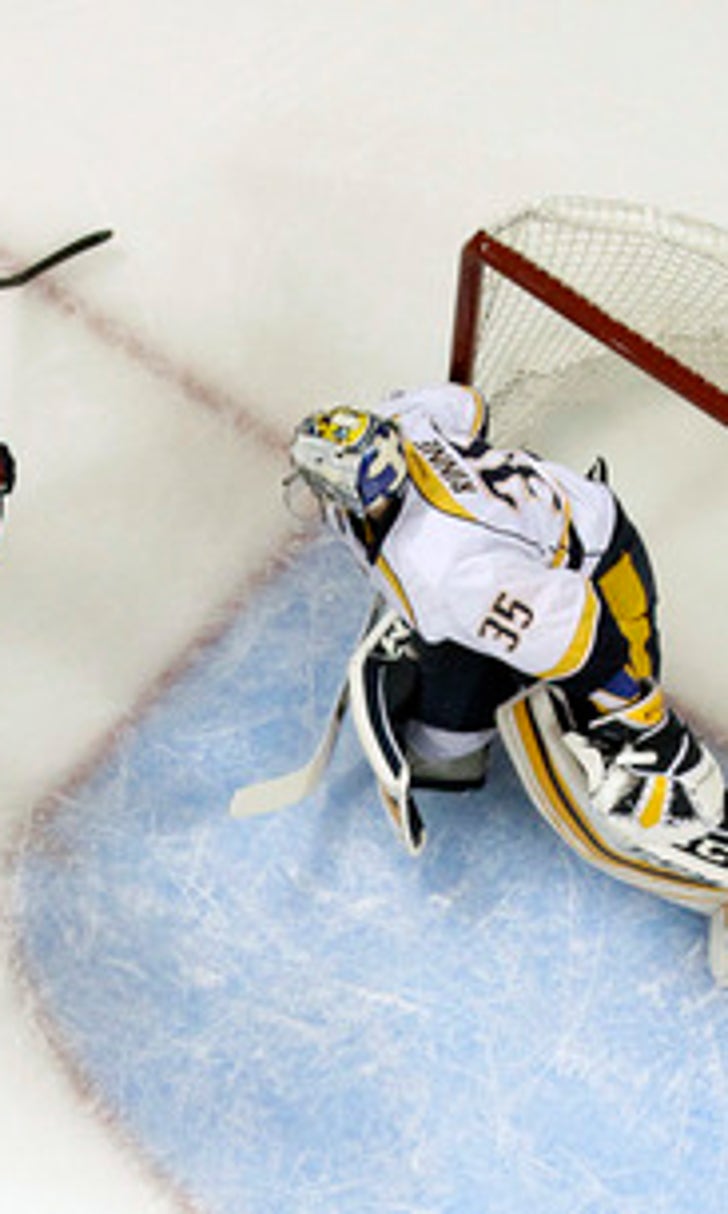 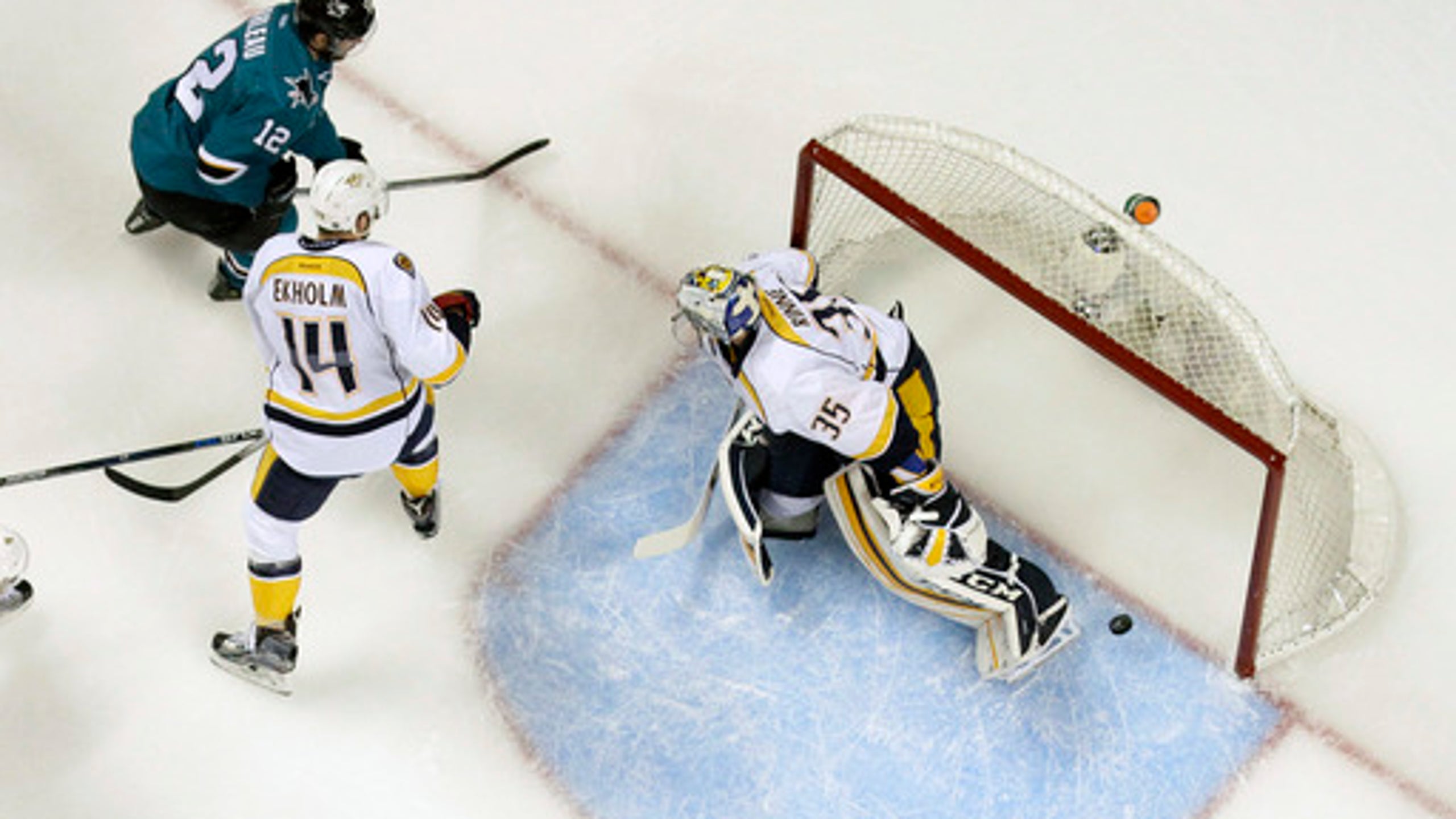 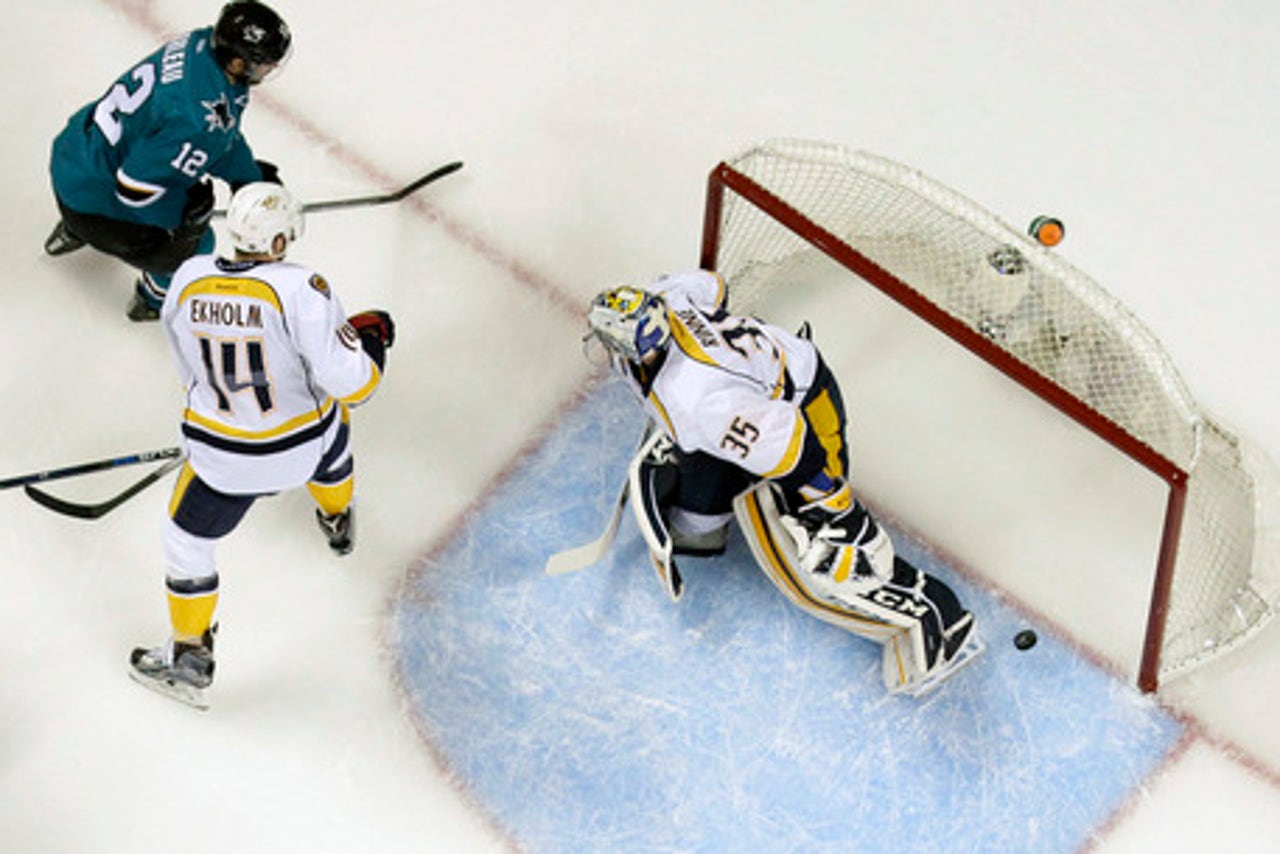 SAN JOSE, Calif. — Instead of being discouraged by a triple-overtime loss and a disallowed potential game-winning goal, the San Jose Sharks chose to build on their strong play in the overtime periods.

Joe Pavelski scored two goals and the Sharks used some reconfigured lines to bounce back from the tough loss and beat the Nashville Predators 5-1 on Saturday night to take a 3-2 lead in their second-round playoff series.

"We felt after that last game we played a couple really good periods, some of our better periods of the playoffs," said Pavelski, whose apparent goal in the first overtime in Game 4 was waved off for goaltender interference. "We had to carry that. It was up to us to really get that momentum back. Guys did a good job coming out."

Patrick Marleau and Logan Couture also scored as part of San Jose's new second line and the Sharks moved within one win of advancing to the Western Conference final for the fourth time in franchise history.

"That's what we're supposed to do," Couture said. "We're supposed to go out and contribute offensively and score goals and play well. When we're winning games, most nights the big guys are contributing. That's just expected."

San Jose will look to secure a spot in its first conference final since 2011 by winning at Nashville in Game 6 on Monday night.

Melker Karlsson added a late goal and Martin Jones made 24 saves to give the home team its fifth straight win in this series.

Game 4 overtime hero Mike Fisher scored and Pekka Rinne made 23 saves, but Nashville couldn't recover after allowing goals in the opening and closing minutes of the second period. 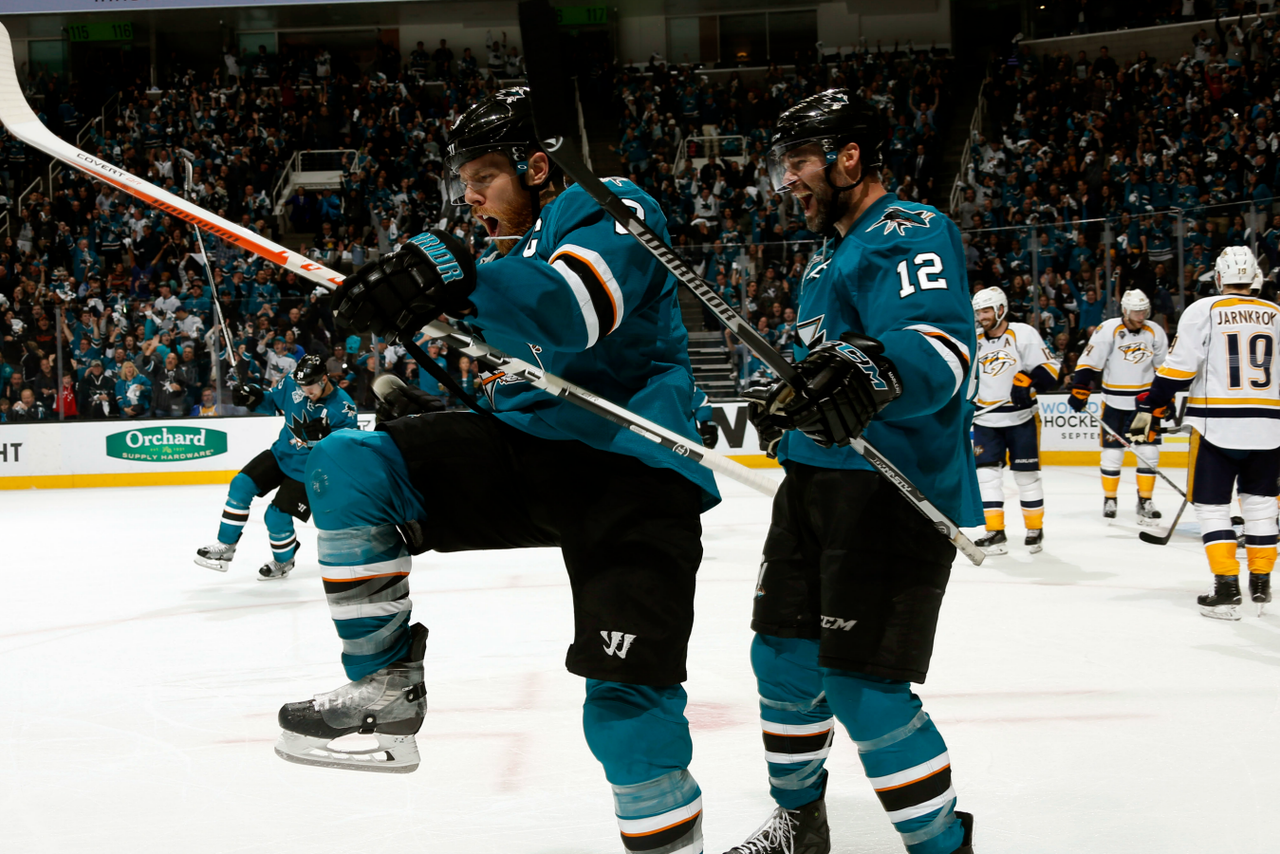 "It was pretty visible wasn't it that we weren't playing well," Nashville forward James Neal said. "We weren't ready to go. They came out strong with a good push. We didn't play as good as we can as a group."

The Predators now must try to repeat the trick they pulled off in the first round against Anaheim by rallying from a 3-2 series deficit if they want to reach the conference final for the first time in franchise history.

"It was Patty's best game of the series, and that line was excellent all night," DeBoer said. "Some changes work, and tonight that change worked."

On the opening shift of the second period, Couture took a pass from Joonas Donskoi and skated in on a breakaway where stickhandled in and slid the puck between Rinne's pads to put San Jose up 3-1 just 35 seconds into the period.

Couture then drew a tripping penalty from Roman Josi in the final minute of the period. The Sharks then scored right off the faceoff with Marleau setting up Pavelski on a one-timer for his second goal of the game.

The Sharks killed an early power play in the third period and limited Nashville's chances after that to seal the win. 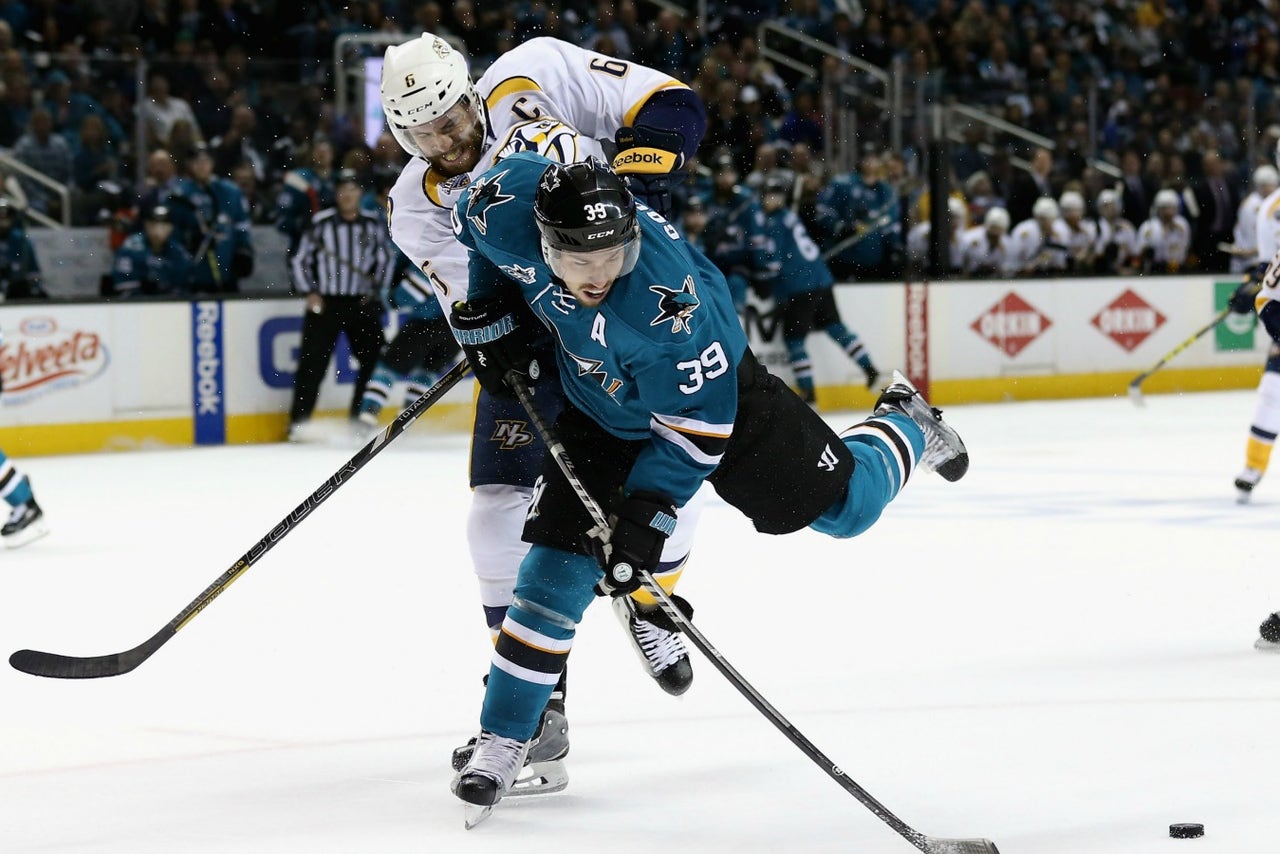 The Sharks' Logan Couture is hit by the Predators' Shea Weber.

The new second line wasn't the only lineup switch DeBoer made. He also gave Dainius Zubrus his first playoff action on the fourth line in place of Tommy Wingels. Zubrus brought a physical element to the game but it was Couture's line that did most of the damage.

Donskoi had two assists, including a nifty backhand pass right to Marleau for a one-timer that opened the scoring midway through the first.

The Predators answered with a familiar line when Fisher scored his third goal in the past two games on assists from James Neal and Colin Wilson to tie it. That line scored all four goals for Nashville in the Game 4 win, including Fisher's goal in triple overtime to end the game after 51:12 of overtime.

But San Jose answered right back with a goal from its top line when Joe Thornton sent a blind, backhand pass to Pavelski in the edge of the circle for a one-timer that beat Rinne late in the period.

"They had a better start to the game," Wilson said. "We weren't as desperate as we needed to be. At 2-2, both teams should be in the same mindset."

NOTES: Pavelski has seven career multigoal playoff games, including the opener in round one against Los Angeles. ... San Jose has not had a playoff hat trick since Devin Setoguchi against Detroit in 2011. ... F Mike Ribeiro returned to the lineup after being scratched the past two games for Nashville.