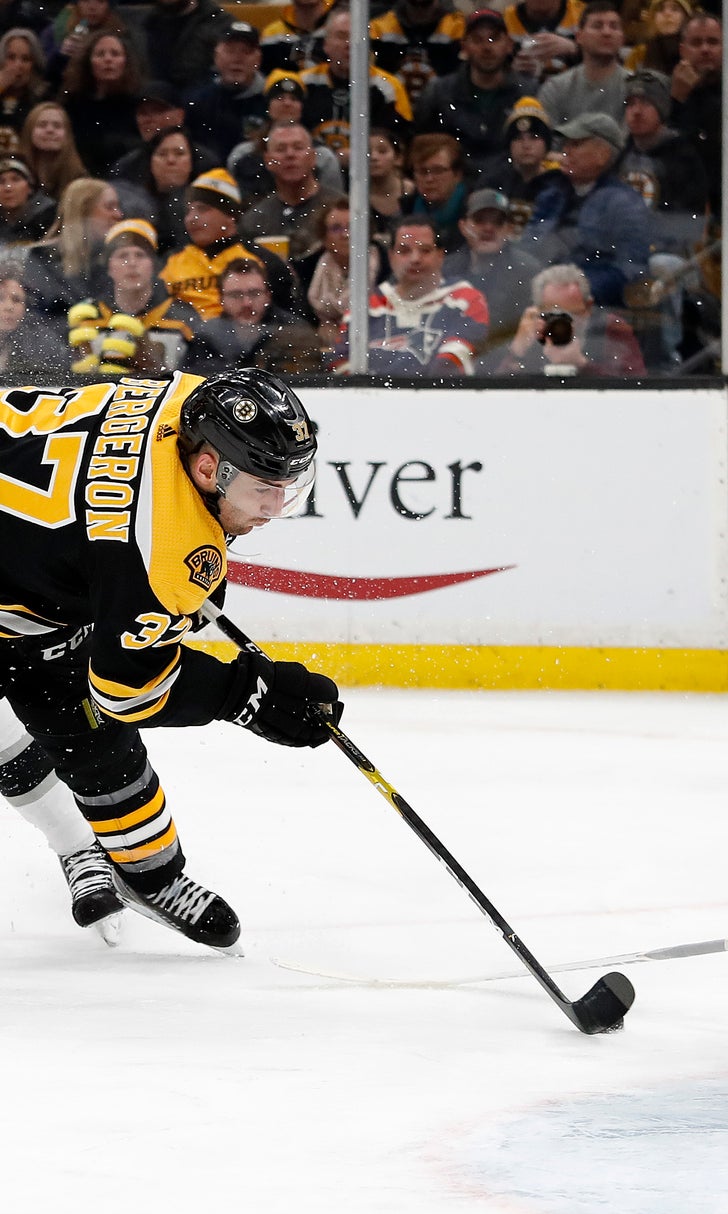 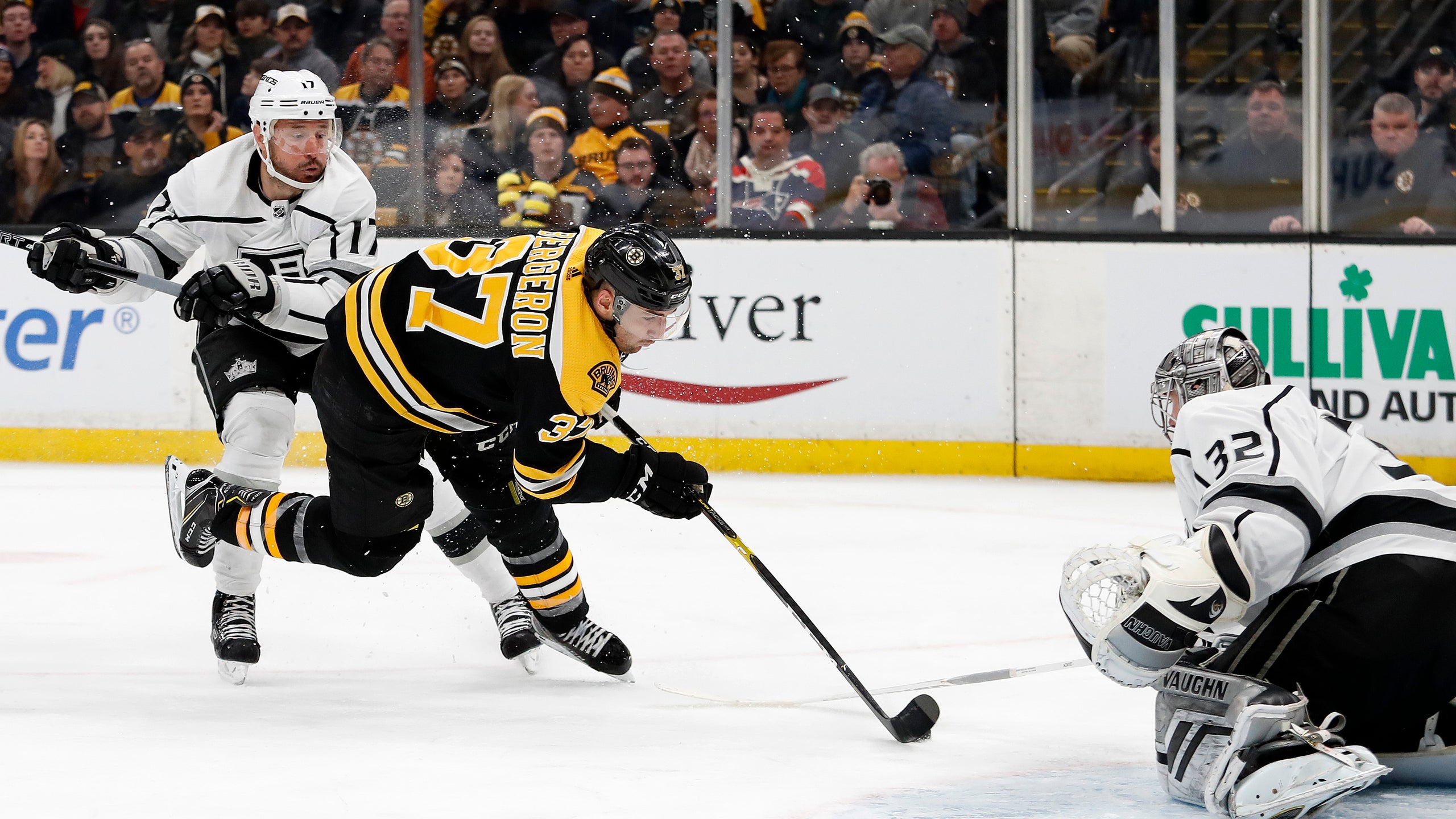 BOSTON (AP) — The Boston Bruins honored Patrice Bergeron before the game. He made sure there was a celebration at the end.

Bergeron scored a power-play goal with 2:26 left in overtime, and the Bruins beat the Los Angeles Kings 5-4 Saturday after blowing a two-goal lead.

"The legend continues," Boston's Brad Marchand said. "It's great to see him have the game that he had. It was a great ceremony at the start. He deserves all the recognition that he's been getting, and he's gotten over the last few years."

The Bruins held a pregame ceremony for Bergeron, who earlier this week became the fifth player in team history to play 1,000 games with the club. During the first period, there was a video tribute that included congratulations from Super Bowl MVP Julian Edelman and former Red Sox star David Ortiz.

"I had to kind of look away a few times," Bergeron said. "It was pretty special to hear from all these guys."

He had set up two other goals before beating goalie Jonathan Quick with a wrister from the right circle for the game-winner.

Marchand, David Krejci and Danton Heinen each scored a goal in a 3:22 span early in the third period to give the Bruins a 4-2 edge before the Kings came back. Los Angeles tied it on Oscar Fantenberg's slap shot from the point with 4:47 left in regulation for his first goal of the season.

"The guys battled back," Kings coach Willie Desjardins said. "Was a little disappointing to start the third. We could have been better at the start of the third for sure."

Charlie McAvoy had the other goal and Tuukka Rask stopped 25 shots for Boston, including Adrian Kempe's breakaway in the first minute of OT. The Bruins have collected at least a point in eight of their last 10 games (4-2-4).

Alex Iafallo and Anze Kopitar also scored for the Kings, who had their three-game winning streak snapped. Quick made 28 saves.

Krejci gave the Bruins a 3-2 lead just 90 seconds after Heinen tied it early in the third. Skating in on rush, Torey Krug fired a shot off the right post before Krejci sent the rebound into the net.

Heinen had banged in a rebound from the edge of the crease 3:27 into the third.

The Bruins then took their two-goal lead when Marchand converted a perfect pass from Bergeron for a short-handed goal at the end of a 2-on-1 break.

Trailing 1-0 midway into the second period, the Kings scored twice in just under six minutes to move ahead. With Krejci in the penalty box for slashing, they tied it on Iafallo's power-play goal at 8:13, a shot from the right point that caromed in off Rask.

Kopitar made it 2-1 when he one-timed a pass from Dustin Brown from the bottom of the right circle at 14:02.

"We worked hard to get the 2-1 lead and we kind of feel asleep there," Los Angeles forward Brendan Leipsic said.

The Bruins had moved ahead 1-0 when Bergeron set up McAvoy's goal 4:38 into the second. Bergeron collected a pass down low, twisted his hands quickly and made an off-balance feed to McAvoy, who was coming hard down the middle toward the net.

Quick made a couple of nice stops late in the scoreless first. The best was when he came across the crease to block Peter Cehlarik's shot from the bottom of the right circle.

NOTES: Bergeron reached the 1,000-game milestone in a 3-1 win over the New York Islanders on Tuesday, scoring two goals. ... The others to play that many with the Bruins are Hall of Famers Ray Bourque and John Bucyk, current GM Don Sweeney and Wayne Cashman. ... Los Angeles played the fifth of a six-game trip; it was Boston's first of three straight at home before it heads west for a five-game trip. ... The teams meet again in Los Angeles on Feb. 16. ... Bruins D Matt Grzelcyk was out with a lower-body injury. ... Los Angeles C Jeff Carter missed his third straight with a lower-body injury.

It was the opener of a Los Angeles-Boston doubleheader in TD Garden. The Celtics were set to host the Clippers Saturday night. Loud chants of "Beat LA!" echoed around the building after Boston tied it in the third.

Kings: At the Capitals on Monday night.

Bruins: Host the Avalanche on Sunday.