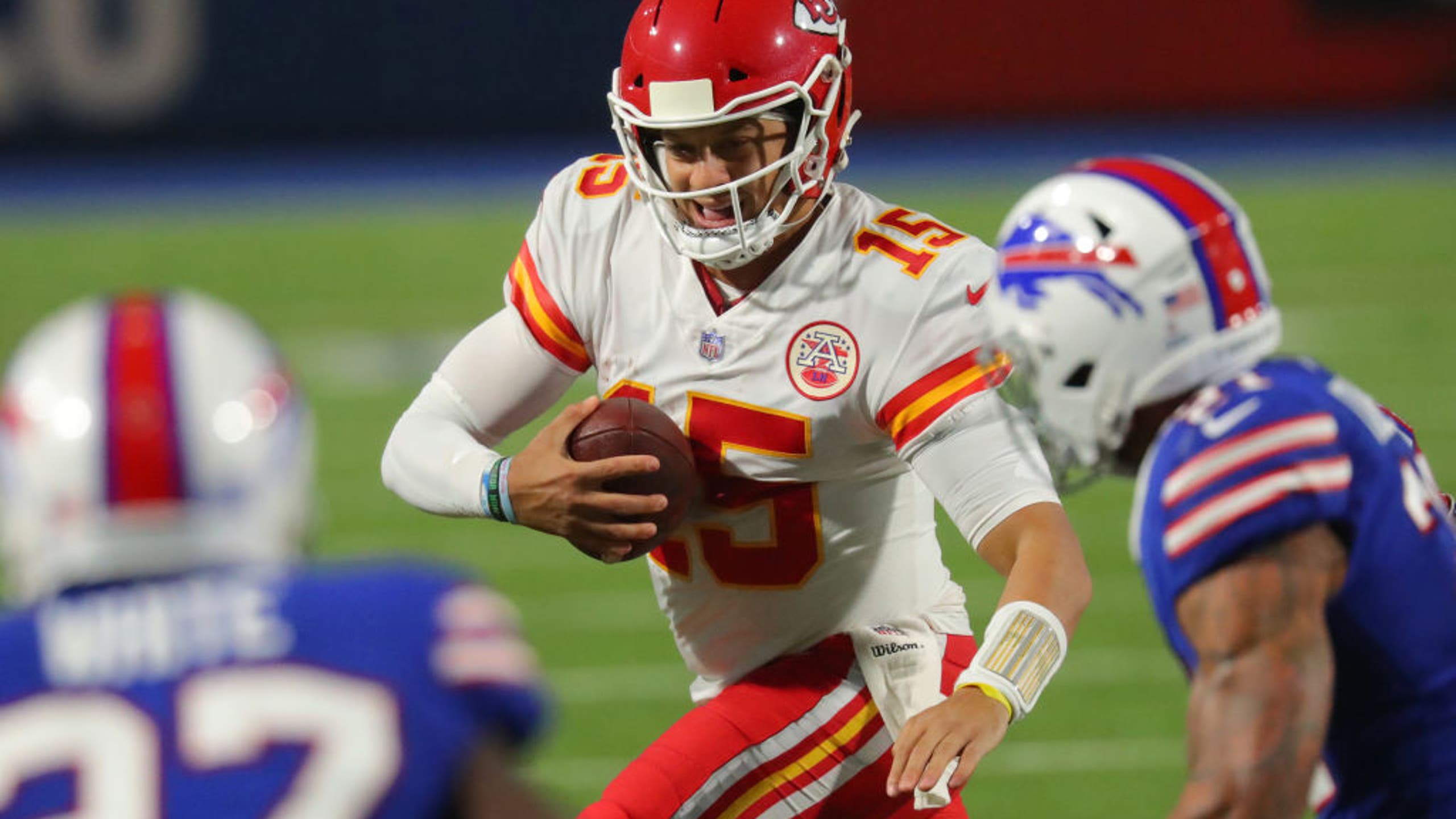 previous story
An Inside Look at Patrick Mahomes' Playlist
next story
Will The Mahomes News Move Lines?
National Football League

Little did we know it back in mid-October, but the NFL offered us a preview of its conference championship weekend in Week 6.

On Oct. 18 in Tampa, the Buccaneers decisively handed the Packers their first loss of the season, rolling to a 38-10 victory. The next night in Buffalo, the defending champion Chiefs flexed their muscles against the Bills, running to a 26-17 win in some inclement weather conditions.

What can we learn from those games as we look to the rematches three months later? There are plenty of takeaways – and some data points that we should smartly discard.

Prizes of $500,000 and a Ford F-150 truck are on the line in this week's FOX Bet Super 6 contest. Just download the app and answer six questions about the Bucs-Packers game, and you'll be in the running!

Let's dig in with this week's confidence picks:

Green Bay is the best team in the NFL. The Packers are peaking at the right time, and they will win this game going away with their offense.

The Green Bay offense had nine possessions last weekend against the Rams' defense, which is the best unit at defending the pass in the NFL. The Packers scored on six of those drives, ended one drive after a dropped pass that likely would've been a touchdown and punted once. The ninth drive of the game ended with Aaron Rodgers taking a knee to finish his team's victory. The Packers' offense should continue to roll Sunday against a Tampa Bay defense that is excellent against the run but not as good against the pass.

The Bucs dominated the Pack way back in Week 6. Tampa Bay won the game 38-10, and it was Rodgers' worst game of his MVP season. Conventional wisdom would say, "Hey, the Bucs' defense dominated in the first appearance. They should do it again." Not so fast.

First, that matchup was almost three months ago. As we saw last week, with the Bucs beating the Saints after losing to them twice in the regular season, results from multiple months ago don't matter in the playoffs. Teams change. Teams evolve. And the loser of the first matchup usually has the schematic advantage in the rematch.

The hope for the Bucs' defense is that it continues to dominate against the run. The Bucs allow the fewest rushing yards in the NFL, and more specifically, they are outstanding at stopping the run between the tackles. They allow fewer than 3 yards per carry between the tackles. In theory, if the Bucs stop the run, that puts the Packers behind the sticks with second-and-long and third-and-long. Those are situations in which the Bucs' pass rush and pressure package can disrupt the Packers' offense.

That is the best case for this Tampa Bay defense, and the Packers know this. I expect a pass-heavy game from Rodgers, using the entire field to spread out the defense and find ways to use the quick passing game as a supplement to the run.

Without turnovers, the Bucs' offense has struggled to beat winning teams. Tampa Bay has beaten two teams with winning records this season: the Packers in Week 6 and the Saints in the divisional playoffs. The Bucs are plus-six in turnovers in those two games. They scored 35 points off turnovers, more than half of the points scored in those two games.

It just seems unlikely that the Bucs will be able to force turnovers at the same rate in this game Sunday, given that Rodgers has thrown three interceptions in the 16 other games this season. Without turnovers, the Bucs' offense struggles for large periods of time against quality opponents.

The Packers' defense is just average, but they do enough to get stops. A 2020 defense doesn’t need to be elite for the team to win. Just get a few stops per game, and allow the offense to score.

There are so many reasons I believe the Packers' offense will run through the arm of Rodgers. As mentioned above, the Bucs dominated the previous meeting by pressuring Rodgers with the blitz. In the Packers' 16 games, including the playoffs, when they didn’t play the Bucs, Rodgers completed 66.9 percent of passes against the blitz, with 8.3 yards per attempt, 15 TD passes and a 123.5 passer rating. Against the Bucs, he completed only three of 12 passes against the blitz for 2.3 yards per attempt, and he threw two of his five interceptions on the season. His performance against the Bucs seems like the outlier. Every great unit, whether on offense or defense, has poor games.

I liked the matchup with the Packers' play-action game against the Rams last week because of a divide like this. It paid off in the divisional round, and I expect another payoff this weekend. Finally, I think Green Bay will use the quick passing game as simulation of the running game, so expect to see Rodgers getting the ball into the receivers' hands quickly.

Patrick Mahomes will be playing Sunday, but even with him under center, the under is the play here.

My pick is based on how the Bills are going to approach playing the Chiefs' offense. In their matchup in mid-October, the Bills refused to be beaten by the pass. They played a light box, which means if the Chiefs had five blockers, the Bills matched with five. Buffalo is at disadvantage against the run in this alignment, but that’s by design.

The Bills would rather force the Chiefs into running the ball than be beaten deep by the pass. And though the Chiefs rushed for 245 yards in the first matchup, they scored only 26 points. Mahomes had only 26 pass attempts for 225 yards. The Bills will take that split any day of the week, especially as their rushing defense has improved throughout the season.

The Chiefs' defense is not particularly good in general, but they rise to the challenge. They rank 23rd in defensive DVOA but do just enough things right when the lights are brightest. For example, since their bye week, the Chiefs allow nearly 6 yards per carry when winning by 14 or more points. When it’s a one-score game, they allow only 4 yards per carry. I can’t explain that.

Against the Browns, those splits were even bigger. K.C. allowed 6.27 yards per carry when leading by two or more scores. When the game was under a score, the Chiefs allowed just 1.89 yards per attempt. Although the Bills don’t focus on running the ball, this is an example of the Chiefs' defense stepping up under pressure.

A more tangible advantage for the Chiefs in this game is their downfield passing defense. It’s outstanding. K.C. owns the third-best completion percentage, is tied for the most interceptions and ranks fourth in passer rating allowed. The Chiefs make teams work for points, which is ideal because their red zone defense is awful. They allow nearly 75 percent of touchdowns in the red zone. Without a fumble into the end zone last week, the Browns would have had three touchdowns in four red zone trips.

This game will have the clock running the entire 60 minutes.

Lastly, a point we often overlook is the officiating. The official for the game is Bill Vinovich. His crew does not call many penalties, which keeps the clock moving. The under has hit in 59 percent of the games Vinovich has officiated the past seven seasons.

The blasphemy of taking the under on Mahomes!

I know you should never bet against Mahomes, but I have two good reasons this week. First, the Bills did not blitz Mahomes at all in their first matchup. That marked the first time since 2016 that Buffalo didn’t bring a single defensive pressure in a game. That was smart.

Mahomes ranks first in the NFL in yards per attempt, touchdown-to-interception ratio, passer rating and sacks against the blitz. For good measure, he’s third in competition percentage when the defense brings an extra defender. The Bills continue to tell you that they do not want to be beaten by Mahomes. I expect this same game plan this weekend.

Maybe an even bigger reason for the under than the one above is Mahomes' health. No, not the concussion, which he might or might not have sustained in the victory over the Browns. He still needs to clear protocol, and I expect he will.

The injury to Mahomes' neck and head is the talk of the week, but we shouldn’t forget he also hurt his toe at the start of the second quarter Sunday. Mahomes was visibly limping around, as it appears he got a turf-toe injury on his left foot. That is the foot he uses to plant when he throws.

Turf toes do not heal quickly and are painful. Although Mahomes has shown the ability to play through injury, and he will here, I expect his production to drop. When Mahomes is off with his mechanics, he can be wild. He throws with that funky arm angle at times. If his base isn’t planted correctly, the ball can sail. That's definitely something to watch this weekend.

The Pick: Devin Singletary over 2.5 receptions and over 20 yards receiving
Confidence meter: 8/10

Without the injured Zack Moss in the backfield to split the reps, both of these over props for Devin Singletary feel right. The Bills targeted their running backs only 72 times this season, but against the Chiefs, I have a feeling they might attack with their backs.

K.C. brought pressure against Josh Allen on almost 50 percent of pass attempts in their Week 6 matchup, and what is the antidote to pressure? Screens to running backs out of the backfield against linebackers.