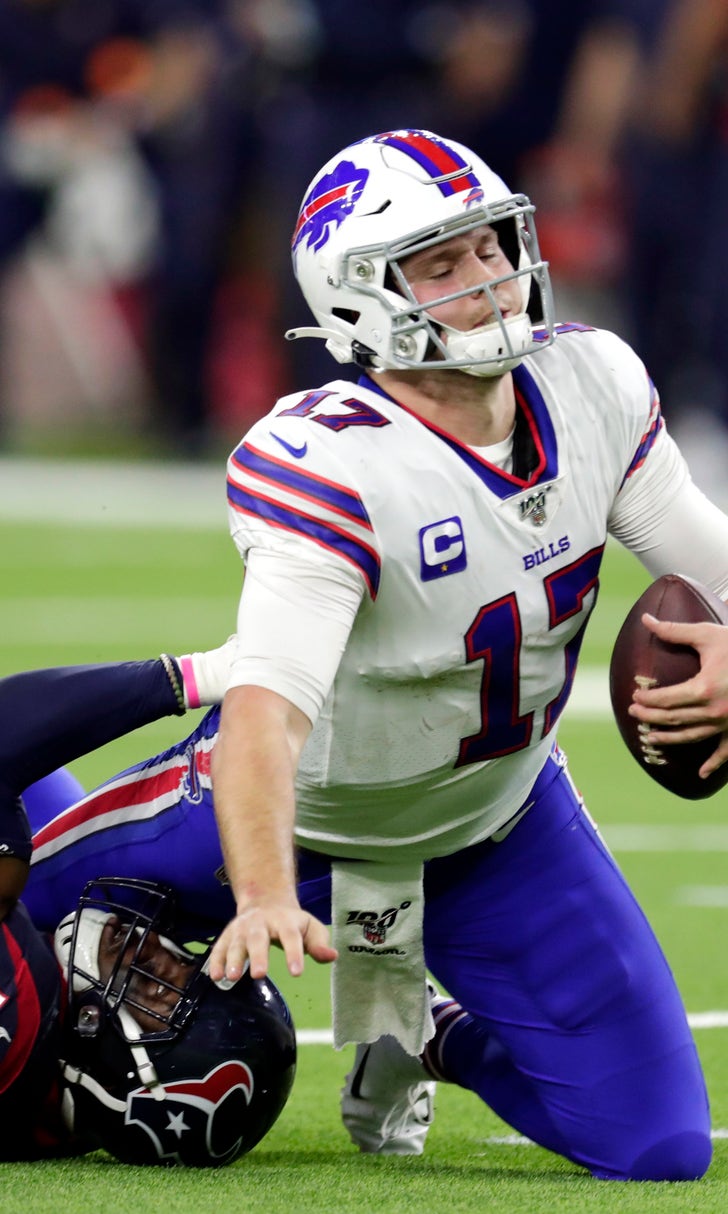 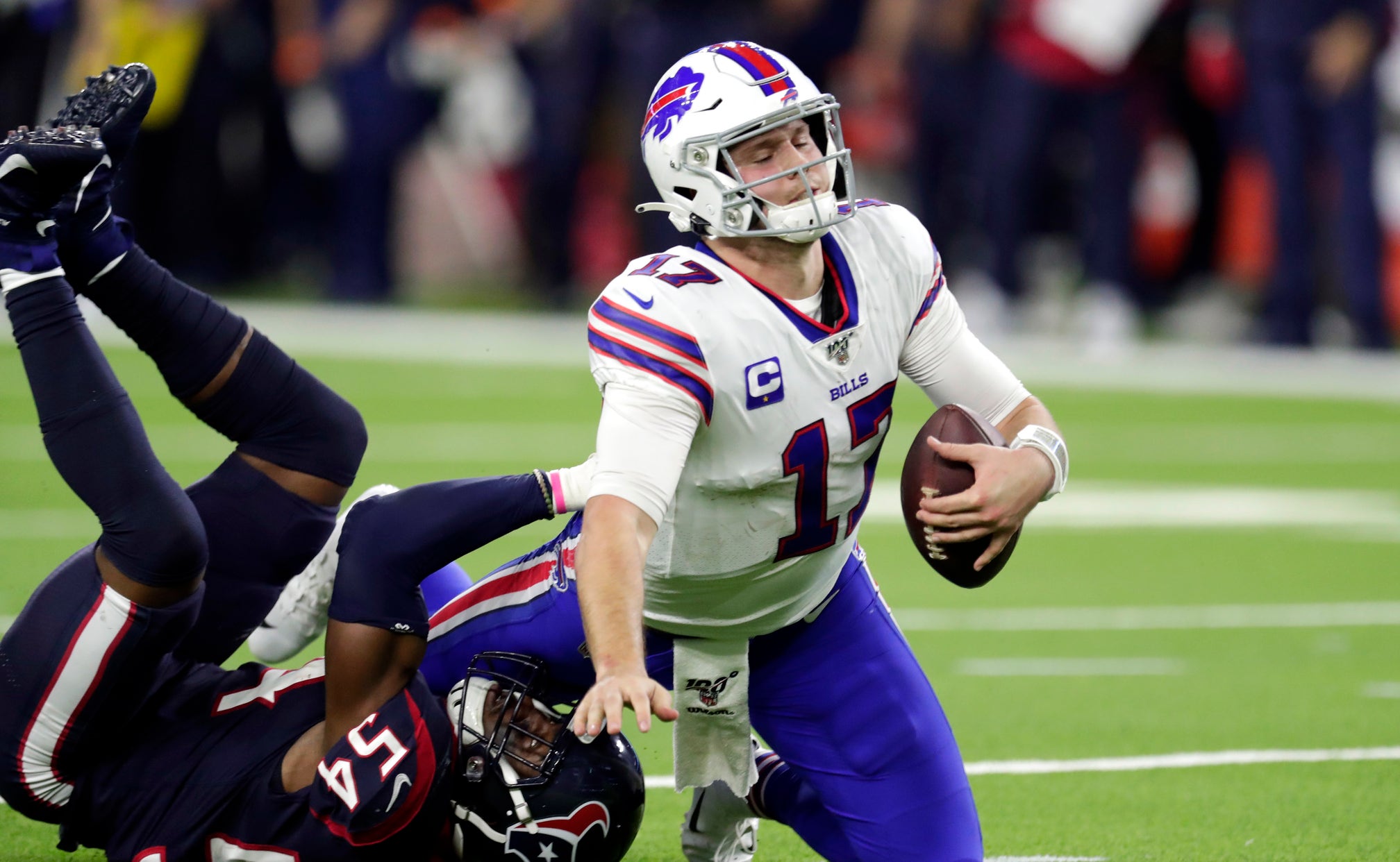 ORCHARD PARK, N.Y. (AP) — Josh Allen expects he'll be carrying the weight and pain of his first playoff loss for the foreseeable future.

Standing at a podium in the Buffalo Bills' field house on Sunday, the second-year quarterback looked and sounded as dejected as he did 15 hours earlier, following a 22-19 overtime loss in an AFC wild-card game at Houston.

He and the Bills have plenty to be unhappy with following a game in which Buffalo unraveled by squandering a 16-0 lead over the final 16 1/2 minutes.

Allen, who scored a touchdown receiving on a pass from John Brown in the first half, was erratic in the second half.

Over the final two quarters and overtime, the second-year player went a combined 11 of 26 for 133 yards with a lost fumble, nearly lost another one on an ill-advised lateral attempt, and was sacked three times. Allen particularly looked panicked attempting to scramble out of trouble and was penalized for intentional grounding on third-and-13 from the Houston 28 with 1:41 remaining.

The outcome, and the way Buffalo collapsed, put a dent into what had been a feel-good season in which the young and developing Bills showed signs of progress in winning 10 games for first time since an 11-5 finish in 1999.

With a majority of the team's core group of starters returning, the challenge becomes transforming the hard lessons learned into something positive.

"I think you have one of two ways to do it," center Mitch Morse said of how Buffalo responds. "You can kind of dig a hole and crawl in it. Or you can kind of learn from it."

Though the Bills made their second playoff appearance in three years, a majority of the players on this year's team were newcomers as part of a major overhaul under coach Sean McDermott and general manager Brandon Beane.

Their vision was freeing up many of the bloated payroll issues they inherited in 2017 and rebuilding the Bills on a foundation of youth. Beane then used his newly created salary cap space to supplement the roster with established veterans last offseason.

Among the additions were veteran running back Frank Gore, who sees the Bills' potential despite the loss in Houston.

"This team has a lot of young talent, and I think they've put themselves in a position to be the top dogs in this division for a number or years," the 36-year-old said. "I'm telling you, Buffalo, they're in a good hands, man."

Gore, who completed his 15th NFL season, said he believes he can still play but will take time to determine whether he intends to play next season.

Fourth-year defensive end Shaq Lawson, who had a career-best 6 1/2 sacks this year, told The Associated Press he is leaning toward testing free agency with his rookie contract set to expire.

"See where it goes, but, I mean, you've still got to find out what's right for you, where it takes you," Lawson said, without ruling out the possibility of re-signing with Buffalo. "I like Buffalo ... but at the end of the day I still want to see what's out there."

Including Lawson and Gore, the Bills have 12 players eligible to become unrestricted free agents this offseason. The group includes starting defensive tackle Jordan Phillips, who had a team-leading 9 1/2 sacks.

One player not returning is linebacker Lorenzo Alexander, who has already announced he's retiring after 13 seasons.

The Cleveland Browns took a break in their coaching search Sunday, and are scheduled to meet with Bills offensive coordinator Brian Daboll either Monday or Tuesday, a person familiar with the meeting told The AP.

The person spoke on the condition of anonymity because the meetings are private. Daboll, Cleveland's offensive coordinator under Eric Mangini in 2009-10, was initially scheduled to meet with the Browns on Sunday.

Cleveland is expected to meet with Patriots offensive coordinator Josh McDaniels in the coming days after New England was eliminated following a loss to Tennessee.

HOW TO GET IT RIGHT

The Bills have the talent, but currently lack the know-how of consistently winning games in the clutch.

It's a deficiency apparent in Allen, who unraveled too often over the final quarter of the season with games on the line. And it also covers a coaching staff, which appeared panicky with its play-calling and time management.

Against Houston, Buffalo all but ignored its running game in the second half having Gore and rookie Devin Singletary combine for nine carries.

Another curious decision was having rookie receiver Duke Williams get 10 targets and play 56 snaps — five more targets and two more snaps than Cole Beasley, Buffalo's established No. 2 receiver — despite playing just his second game in 10 weeks.

The hope is, the young players and staff are better prepared from this experience.

With plenty of salary cap space for a second consecutive offseason, the Bills have an opportunity to address more needs to complement their roster.

The first priority is adding a downfield receiving threat after Williams and Robert Foster failed to establish themselves. Though Brown is a speedster, he and Beasley were mostly used as slot and mid-range receivers.

Another priority is adding a running back to provide a one-two punch alongside Singletary after the 36-year-old Gore showed signs of age.