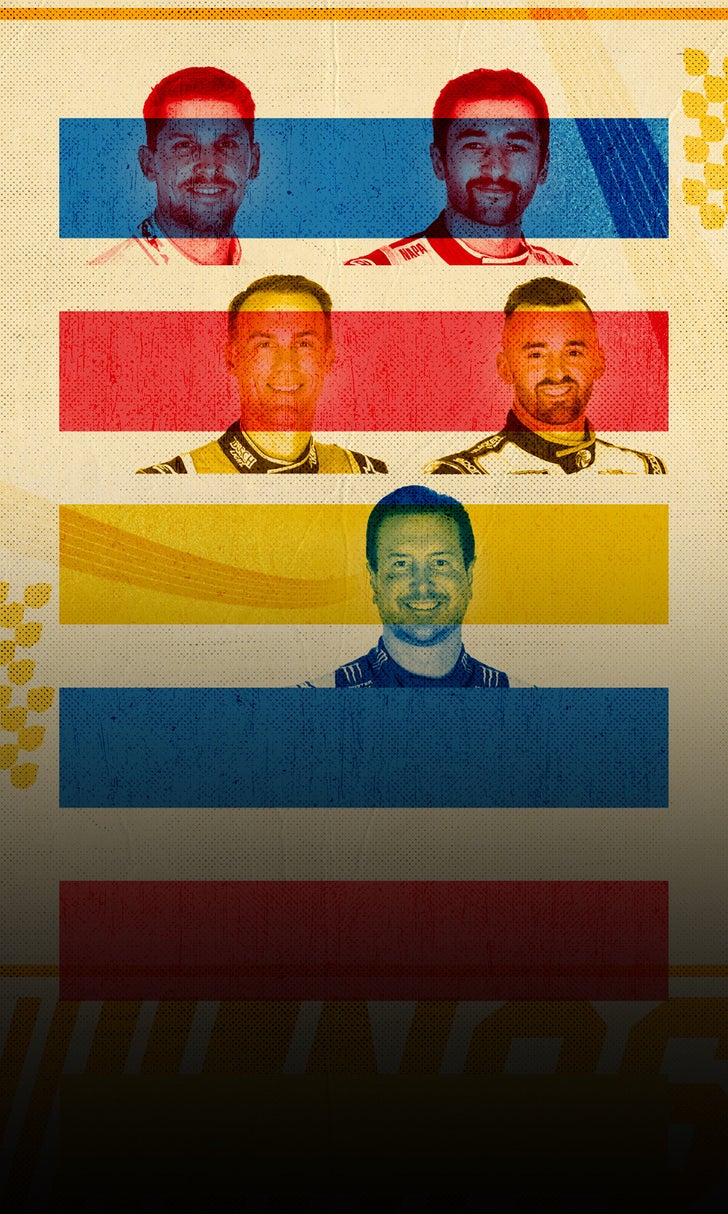 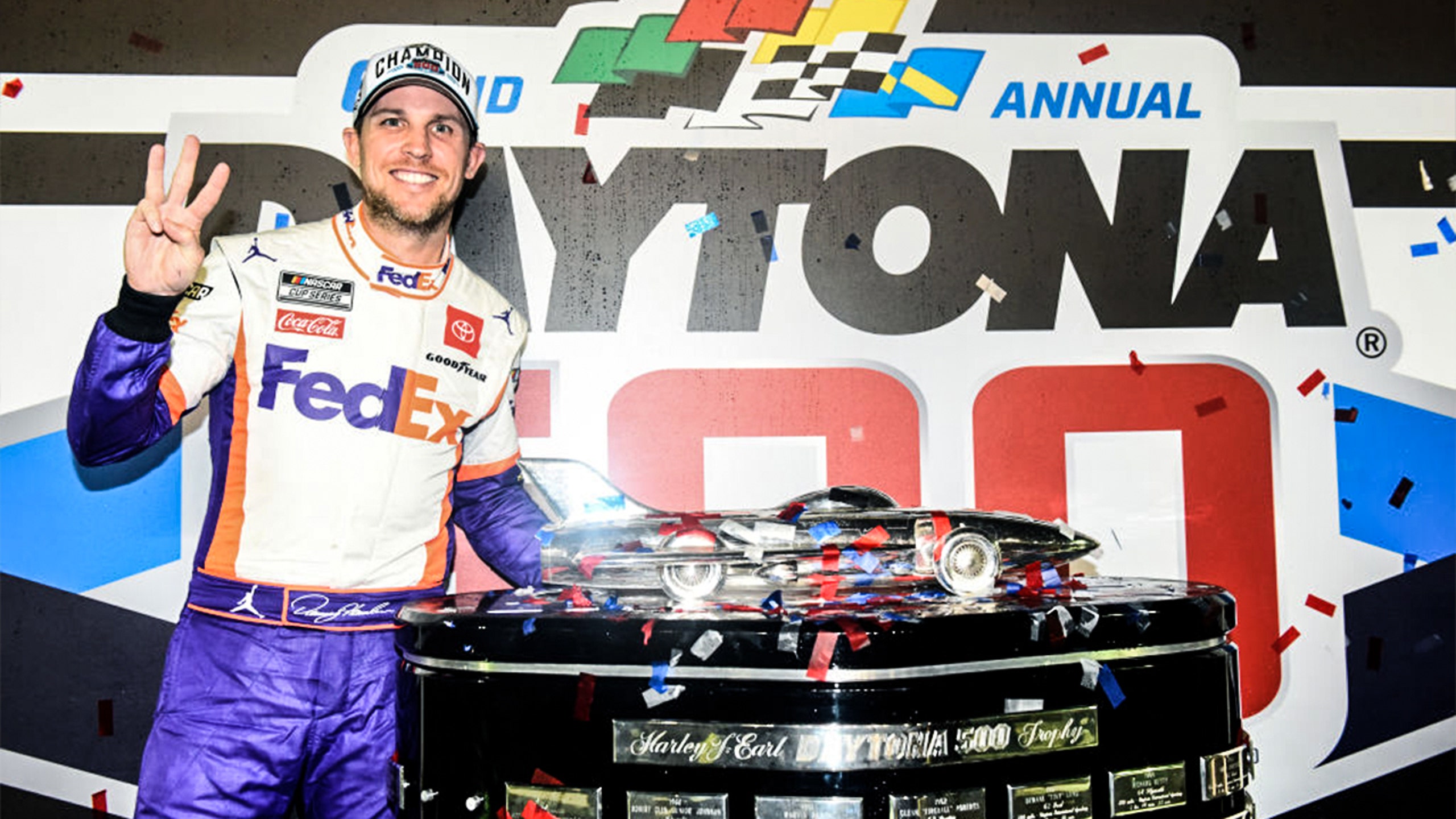 The answer typically is "anyone in the field," considering the unpredictable nature of the race and the aerodynamic draft that tends to create one big pack at Daytona International Speedway.

But in the spirit of great debate and previewing the field, here are my rankings for the expected 44 entrants in the race, beginning with the favorites:

Hamlin seeks an unprecedented third consecutive Daytona 500 win. He has five victories on the drafting superspeedways, including two last year with the 500 and the most recent race at Talladega. He’s a favorite, but to stay out of trouble and be in the right place at the right time for three consecutive years seems like a lot to ask.

Blaney has won two of the past five races on drafting superspeedways, with a couple of Talladega wins. Can he translate that to the sport’s biggest race? He finished second last year (he had the contact with Ryan Newman that triggered that awful wreck), and he showed that he is still willing to make moves, as he won at Talladega months later.

Keselowski has six career wins at the drafting superspeedways, but five of those came at Talladega, and none has come in the Daytona 500. Will 2021 be his year? Maybe. But it has been eight races at Daytona since he has won at the track, and as he said, he needs to find a way to not get in trouble. He isn’t kidding – he has crashed in six of his past eight Daytona starts.

Newman was in position to win the race a year ago when his block of Blaney turned into one of the scariest moments at the track in many years. He won the Daytona 500 in 2008, and he knows how to get it done. Plus, it makes a great story, doesn’t it?

Busch has never won the Daytona 500, and what better way to indoctrinate his new crew chief, Ben Beshore, than by winning the Daytona 500? Busch last won a drafting superspeedway race in 2008, but he could very well be a threat.

The defending Cup champion won at Talladega in 2019. He is going to have a strong car, and who wouldn’t want to push the most popular driver to the front and have the Elliott fan base behind them?

Truex doesn’t have a drafting superspeedway win in his career. But don’t count him out, as he should have a strong JGR machine. He hasn’t made too many enemies over the years, so he could be the choice of the one to push at the end if a driver behind him has to figure out whom to help.

Byron won the most recent race on the Daytona oval, capturing the wild regular-season finale in August. His achieving that triumph to make the playoffs while under the pressure shows that he should have the composure to make the right moves at the end of the Daytona 500.

He won the Daytona 500 in 2018 and has proven himself as a solid drafting superspeedway racer. The combined ECR-Hendrick engine should provide him with plenty of get-up-and-go when he needs it.

Never doubt a Busch in a racing situation, as Busch proved in winning the 2017 Daytona 500. As his opportunities to win the Daytona 500 dwindle as his career likely ends its final year(s), he could be more calculating as well as more aggressive in trying to earn another Daytona 500 win.

DiBenedetto seeks his first Cup win and has proven himself as a strong racer at Daytona and Talladega. He will have help from the other Fords and as a Team Penske driver. Plus, it would be cool to see this as the 100th Cup win for Wood Brothers Racing.

Bowman probably shouldn’t be this high. But call it a gut feeling that he will be in the mix at the end. Not that we are looking to jinx him, but he has been running at the finish in all nine of his Daytona starts.

Jones, who will be competing in his first race for Richard Petty Motorsports, won the summer race at Daytona in 2018. Even he seemed shocked when he won it. Bubba Wallace had RPM in the mix at the end of drafting superspeedway races the past couple of years, so there’s no reason to think Jones can’t do the same.

He has two Cup wins on drafting superspeedways, and he was on the pole for this race last year.

He’s back for his first Cup race since March and his first for Hendrick Motorsports.

He won at Daytona in 2014 and was in position to win the Daytona 500 in 2018 (a year when he later won at Talladega), so this probably is too low a ranking for him.

If he can hook up with his teammate Newman near the end, he has the demeanor to not make a late mistake.

In his first race for Joe Gibbs Racing, the goal should be to finish with a top-10.

Sorry, FOX brother, but it’s your first race in two years, and I can’t show any favoritism.

The debut for 23XI Racing team will be big, and Wallace is good at drafting superspeedways. But it’s still the first race for the organization.

Reddick has three Cup starts at Daytona – and three races in which he didn’t finish because of a crash.

He was fifth in the 2019 race, but it's doubtful that he would get the push he needs to win.

With Preece not guaranteed a full season, a win would suddenly almost guarantee it by being a qualifier for the playoffs.

In the first race for Trackhouse Racing, Suarez will try to hook up with his RCR "teammates" to get to the front.

It’s his NASCAR Cup Series debut, and it will be a learning experience.

Custer isn’t known as a Daytona ace, but he also wasn’t expected to win a Cup race at Kentucky last year.

If Ragan makes the race for Front Row Motorsports, he could be a factor, as he doesn’t have to worry at all about points in this one-off.

It’s his first race for Chip Ganassi Racing, and the big question is whether last summer’s excruciating Daytona finish in the Xfinity Series is still in his head.

The Spire Motorsports cars will be good, and LaJoie posted a top-10 finish in the Daytona 500 last year. But this also is a new team, as Spire has moved into its own shop. Some growing pains are expected.

Having to qualify for the race for Gaunt Brothers Racing, Ty Dillon was third at Talladega last fall, so if he is near the front at the end, he might have a shot.

This will be his Cup debut, if he makes the race, and while he will be in strong equipment, he’s unlikely to find too many friends on the track until he proves himself in a Cup car.

The driver and co-owner of Live Fast Motorsports would love to get through this race with a decent finish and a car he can bring to Talladega.

Driving for Beard Motorsports, which fielded a car for Brendan Gaughan in previous years, Gragson needs to first make the race.

Kaulig Racing has Grala in the car, and he will have to qualify. He does have a win at Daytona in a truck race in 2017.

His Cup debut will be in the 500, and the key will be to stay out of trouble.

Driving the full season for Rick Ware Racing, the RWR cars typically don’t have the speed, but as Brennan Poole showed at Talladega last fall, when he finished ninth, a top-10 is possible.

Driving the majority of races for his father’s team this year, he also will compete in some IndyCar events.

One thing Houff has going for him is that his team manager, Cope, is in the race, so he definitely has a drafting partner.

Gase is locked in and hopes to work with teammates Bilicki, Cope and Ware.

Hill will have to qualify for the race, and that’s going to be tough.

The No. 13 car owned by Carl Long has not confirmed a driver. But read the comment above for teammate Hill. That will be applicable to the driver of the car.