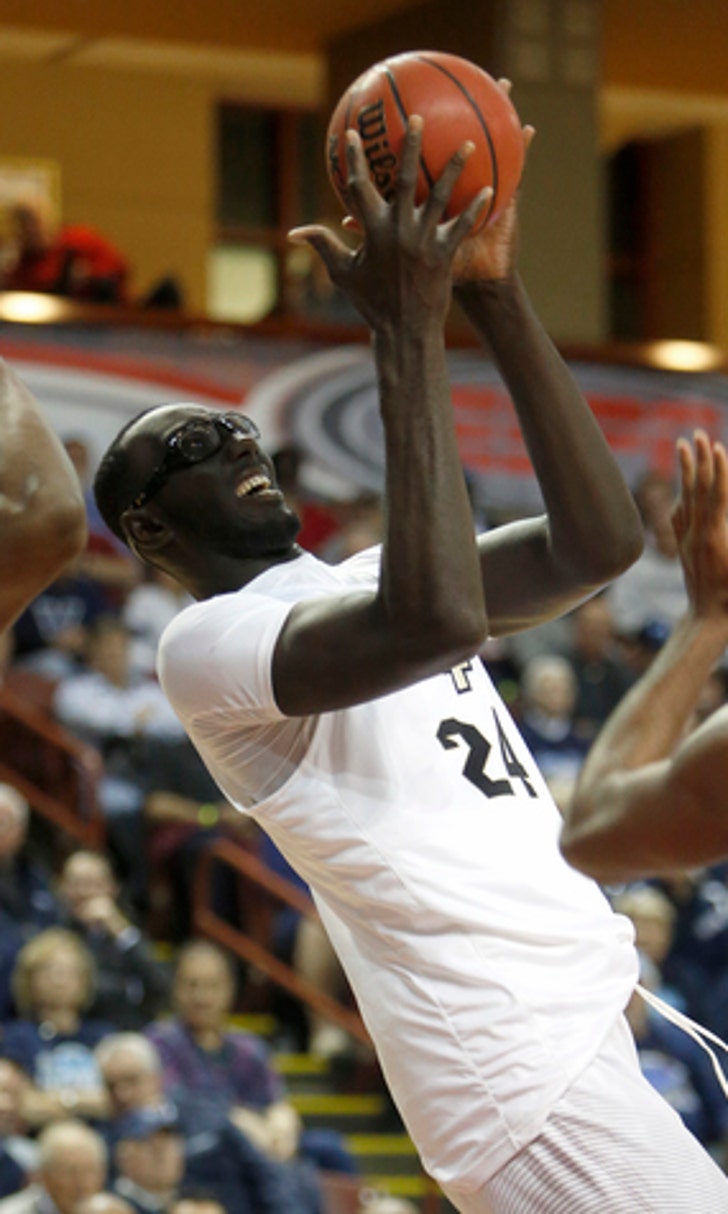 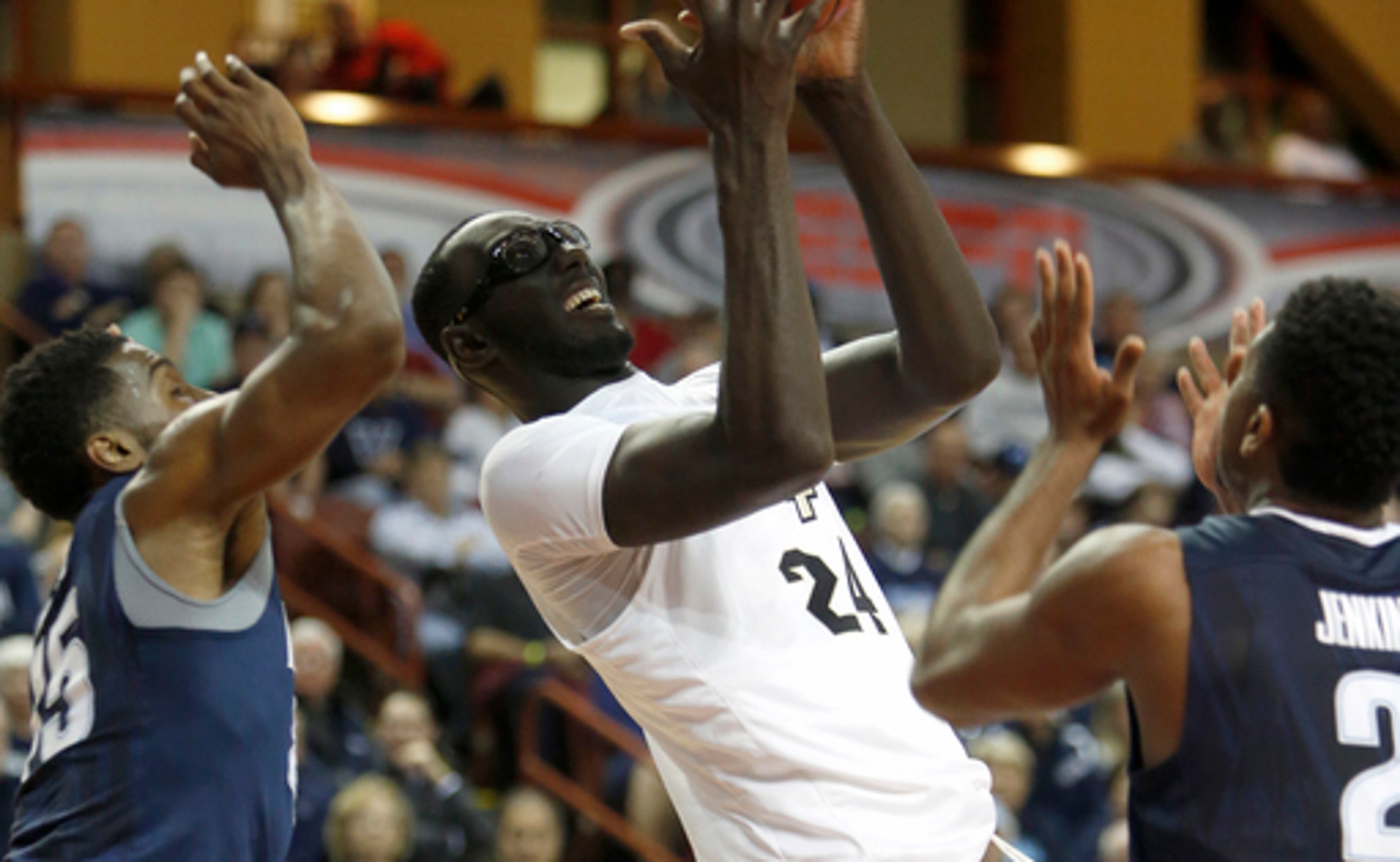 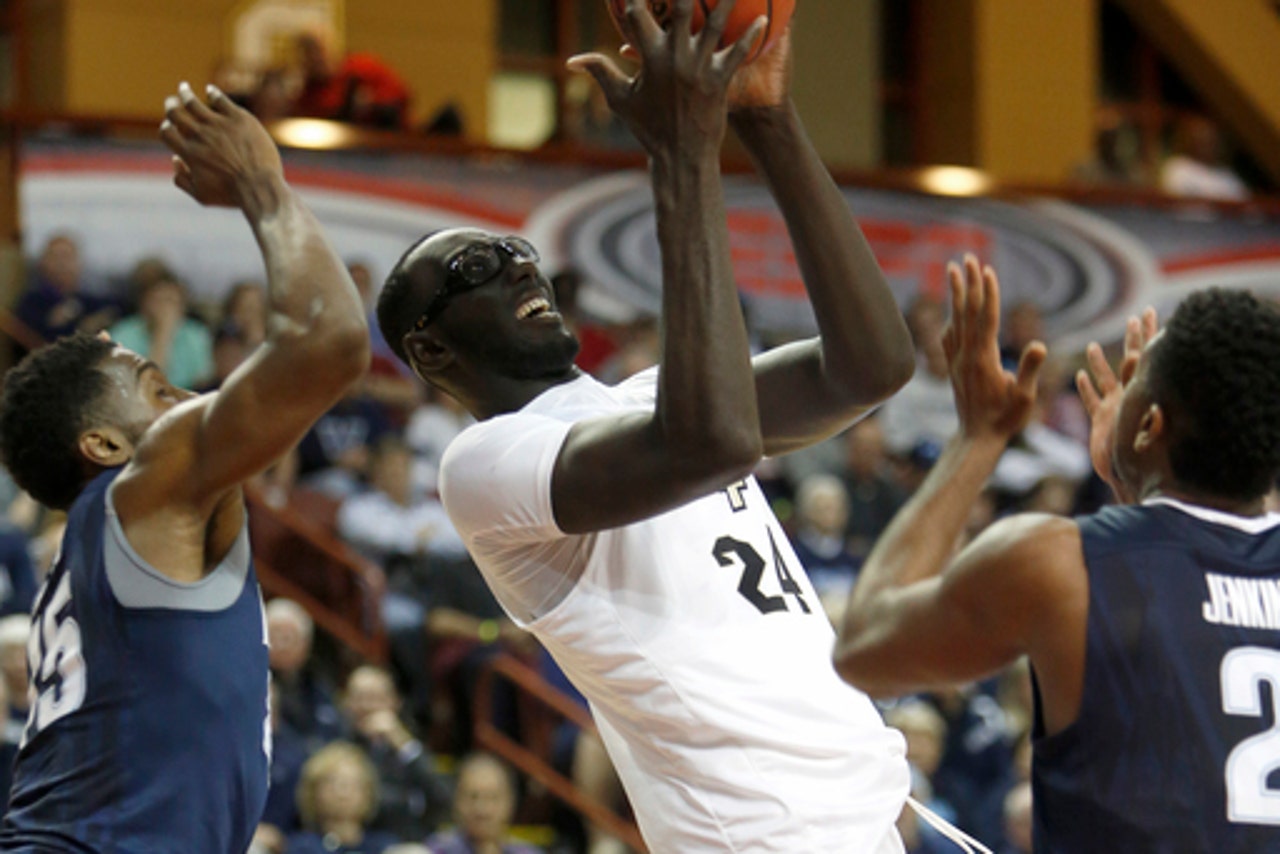 ORLANDO, Fla. (AP) A year ago, the reflection Tacko Fall was seeing wasn't the image everyone else saw in UCF's raw but intriguing 7-foot-6 freshman center.

Fast forward to this season, and there is a new coaching staff, a new energy around the Knights program and definitely a different Fall. The shy, towering young man is getting more comfortable on the basketball court.

''I can definitely be a force in the paint,'' the engineering major from Senegal told The Associated Press. ''I feel like there is really nobody who can guard me in the paint.''

Nobody? A bold statement, though Fall has had an impressive start to the season and turned heads during last weekend's Charleston Classic.

For the first time this season, the nation got a chance to see how much the goggle-wearing big man has improved. Fall dominated against the likes of Mississippi State and defending national champion and third-ranked Villanova. He averaged a double-double over the three-game tournament, including a 20-point, 13-rebound showing in a 67-57 loss to the Wildcats in the championship game.

He caught the eye of ESPN college basketball analyst Dick Vitale, who mentioned Fall on his Twitter page.

''I see it but I can't let it go to my head,'' said Fall, who was named the American Athletic Conference player of the week on Monday after averaging 17.8 points, 12.5 rebounds and three blocked shots in the first four games this season. ''I still have a lot to work on. I can get a lot better.''

The attention and accolades Fall is receiving are a far cry from what life was like five years ago when he and a friend, Ange Badji, were spotted by a man named Ben Simmons in their native home of Dakar, Senegal.

Simmons, who did not return phone calls from the AP, helped Fall and Badji get visas to the United States.

Fall was coming from a poor background, living with his mother and little brother in a one-bedroom apartment where the basic necessities were hard to come by - including going to school.

Fall, who was 7-foot-3 and 16 years old at the time, said his mother - who only speaks French and has never seen him play - was promised that he would be taught the game of basketball, have a chance to earn a quality education and possibly a college degree. But it didn't happen that way when Fall and Badji initially landed in the U.S. in October 2012.

For the better part of a year, Fall and Badji bounced around Texas, Tennessee, Georgia, Kansas and Illinois in search of charter schools.

Finally, in September 2013, they landed in Tavares, Florida, and on the doorsteps of Liberty Christian Preparatory School basically homeless. But that is when life began to change for the better.

Amanda Wettstein and her family took Fall and Badji into their home.

''There were some negative things and there were some positive things because when I came to Florida I met great people, my host family,'' said Fall, a native French speaker who learned English quickly. ''They are still there and are basically part of my family now. We talk every day. They live 45 minutes away from here. They treat me like I'm their own child.''

Wettstein and her husband took the boys in not knowing much more than their first names and that they were in need.

''Neither the school or us had information about them,'' said Wettstein, whose mother-in-law is a counselor at Liberty Christian. ''At the time we didn't know anything about their journey, just that they had been in Tennessee and were homeless and needed a place.''

As for Fall, it wasn't long before it was apparent that he was more than just a tall kid with basketball potential. He was also extremely bright.

After scoring in the 90th percentile the first time he took the SAT, Fall spent his junior and senior years playing at Liberty Christian.

He played AAU hoops in 2014, and had great success. He was invited to the NBA Top 100 and Nike Skills Academy, after which the college opportunities came pouring in. Georgetown, Harvard, Xavier and Wake Forest were among the 36 offers he received, but UCF and former head coach Donnie Jones won out.

The Knights had something others didn't: a location that allowed Fall, who was tired of moving, to stay close to those he was familiar with and who he felt cared about him.

After finally getting cleared to play by the NCAA just before last season, Fall was a raw freshman who showed ability as a shot blocker and post defender.

This year, with former Stanford coach and Duke All-American Johnny Dawkins at the helm at UCF, Fall has continued to improve. Dawkins and his staff have worked with Fall since arriving, improving his offensive game, his strength and post presence.

Dawkins said that because of how well Fall runs the floor, his touch around the basket and shot-blocking ability, the only limit to his upside is his imagination and how hard he works.

The NBA is the logical next step for Fall, though it's unclear when he might make that jump. However, with Dawkins mentoring him and Fall's size and athletic ability, he will get a look by someone.

Fall believes he is up for the challenge, and after what he has been through, no one is counting him out.

''The ultimate goal for me is to play in the NBA,'' Fall said confidently, ''because I think it's going to open so many doors for me to be able to take care of my family, help people back home and give opportunities to people back home like I was given the opportunity to help others.''