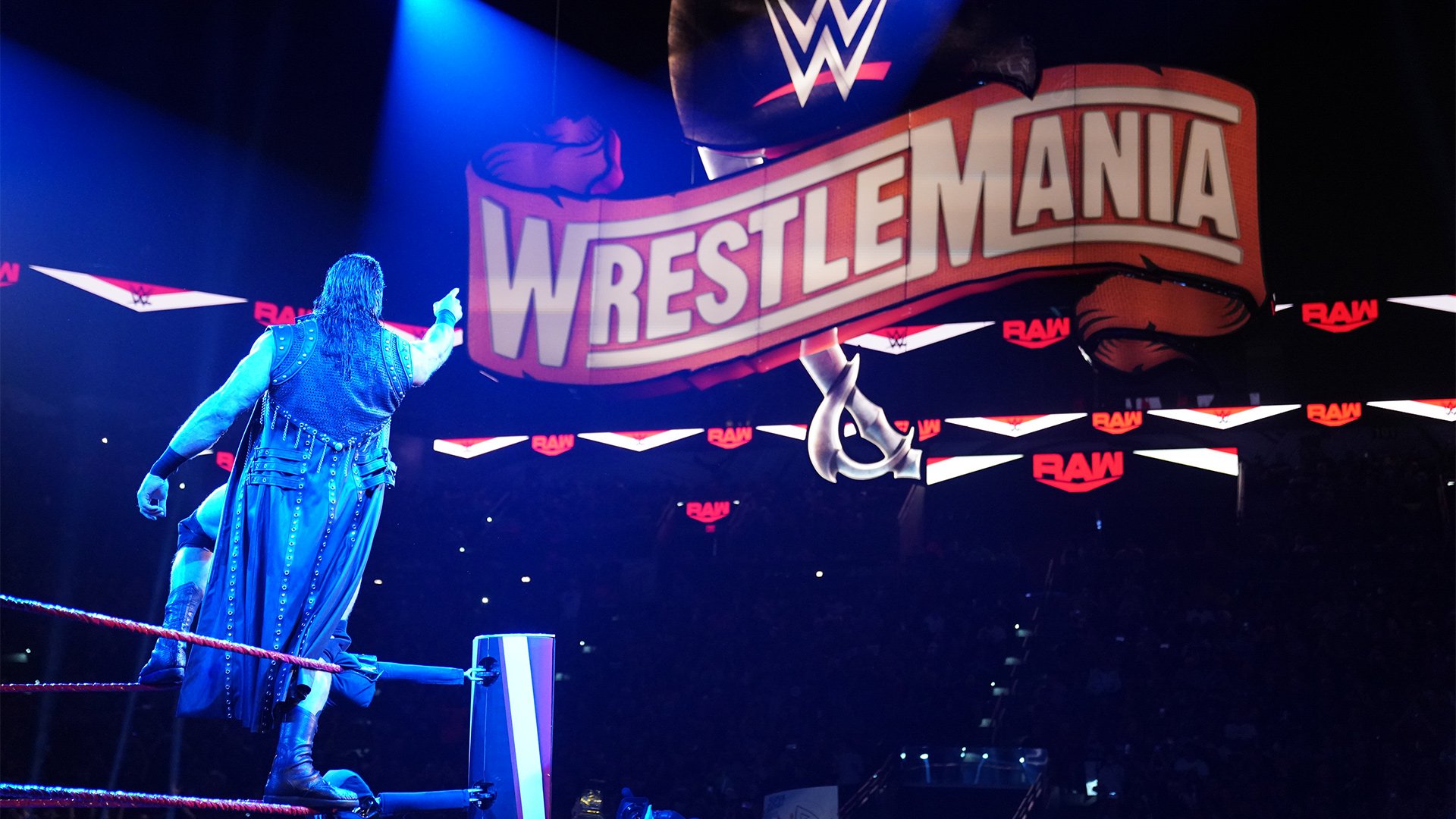 SAN ANTONIO — Drew McIntyre has made his choice, and it was seemingly an easy one. Within moments of Raw’s opening, the winner of the 2020 Men’s Royal Rumble Match declared he would use his Rumble victory to challenge WWE Champion Brock Lesnar at WrestleMania, setting up the Scot for the first World Championship opportunity of his career on the biggest possible stage against the most ferocious possible opponent.

McIntyre’s path to WrestleMania is set to be a rocky one. After dispatching Luke Gallows & Karl Anderson in an impromptu Handicap Match-slash-“Claymore Party,” McIntyre found himself ambushed by Lesnar himself, who mercilessly F-5’d McIntyre in a display of dominance that left the Scotsman gasping for air and, perhaps, coming to the realization that he’s about to get exactly what he wants. And he may discover that the only thing more painful than the destination is the journey. 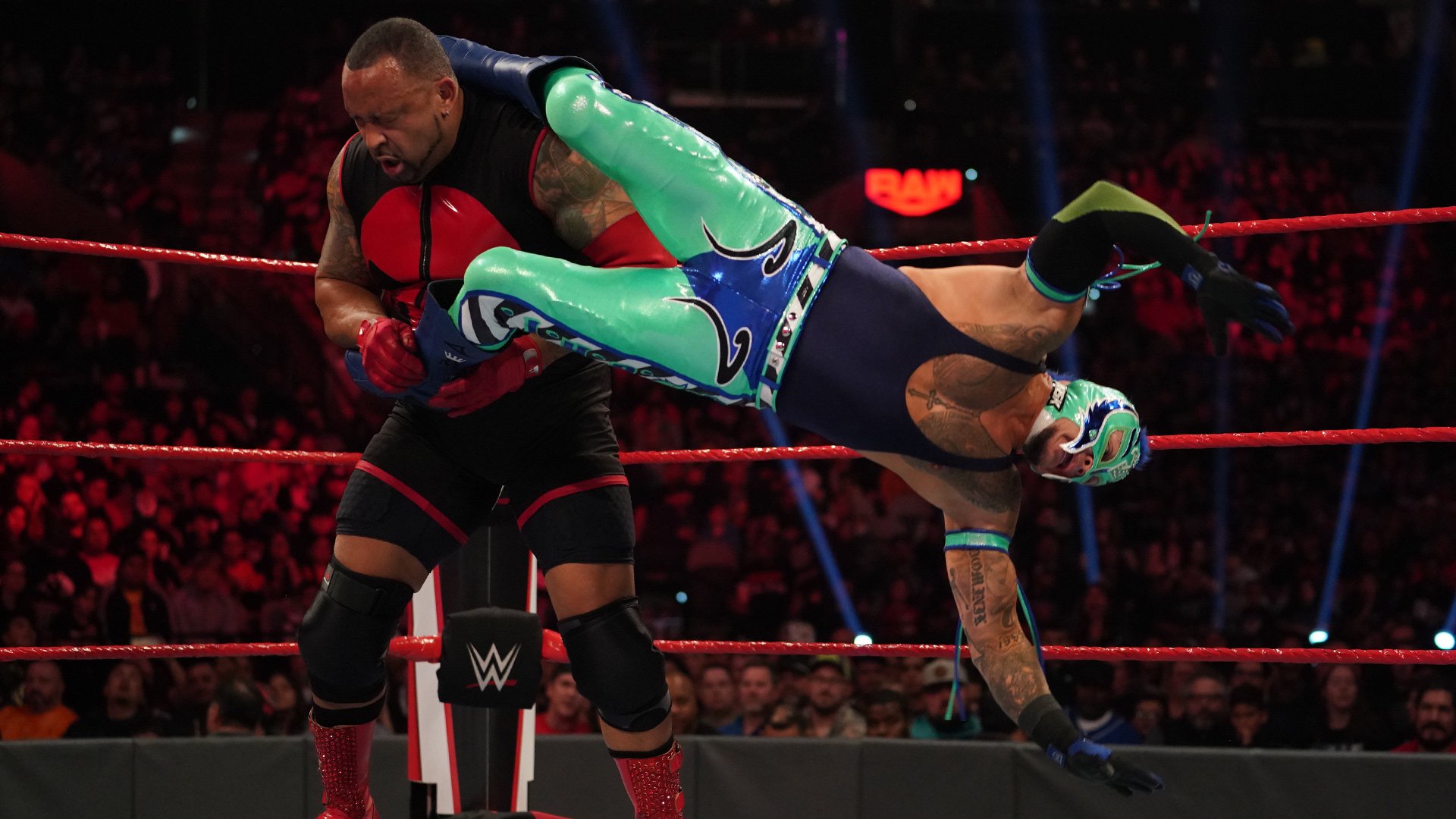 Lost in the chaos of Edge’s Royal Rumble return was the all-too-brief appearance of Montel Vontavious Porter, who might have made a run of his own had he not come up against a feasting Brock Lesnar. The former United States Champion got a proper homecoming tonight, and even though it ended in a loss to Rey Mysterio, the bout was much more even-handed.

For one, MVP was visibly feeling himself, dropping a Ballin’ Elbow on The Ultimate Underdog late in the game and almost — almost — avoiding a 619. While Mysterio’s signature kick missed MVP’s face, he still caught the returning Superstar in the back, incapacitating MVP long enough to follow up with a springboard splash for the win. Hey, as any baller knows, you win some, you lose some. But he looked good doing it either way.

Aleister Black flips the script on the Raw roster 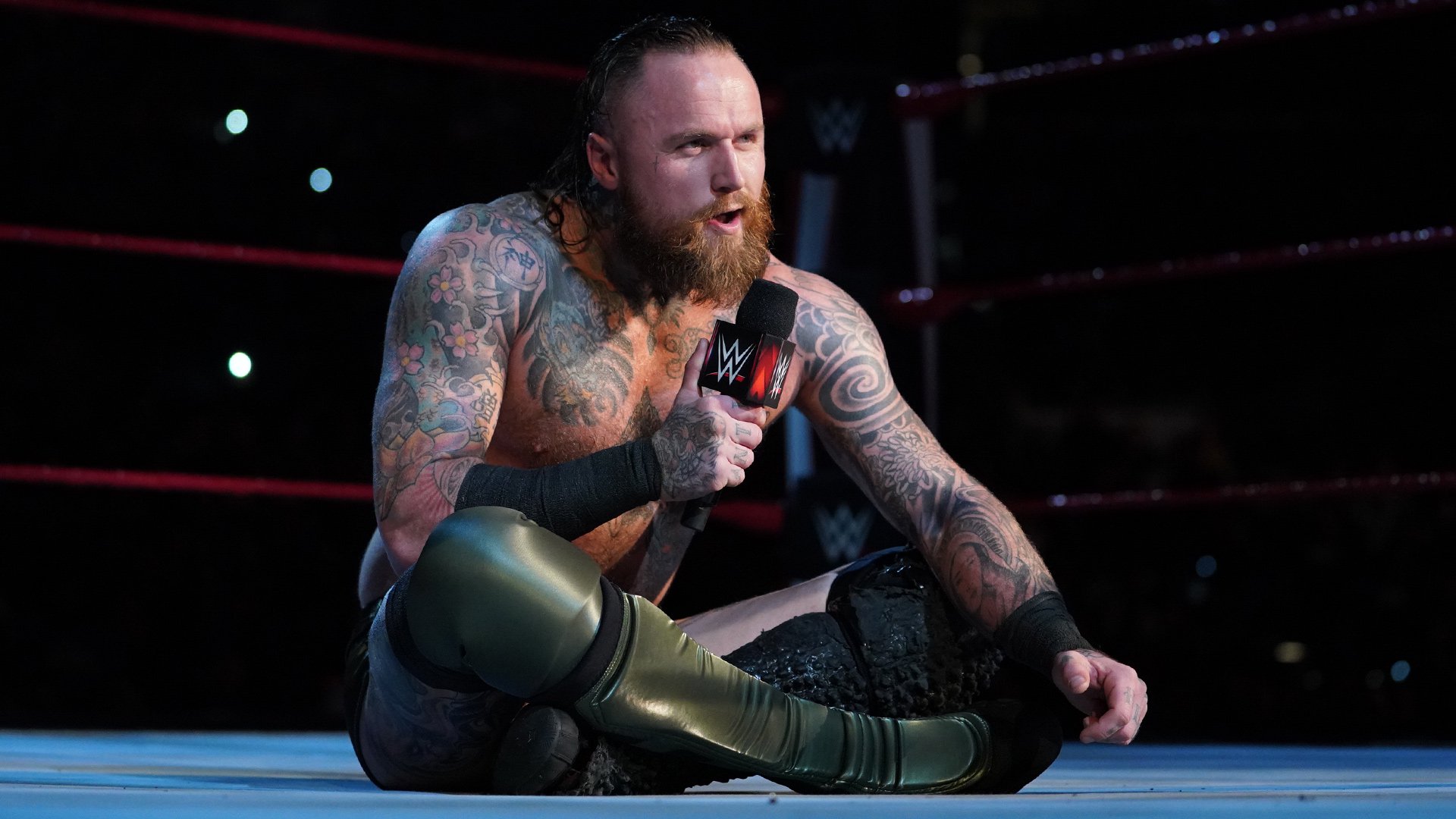 For most of last year, Aleister Black was the man who waited for someone to pick a fight with him. 2020 is looking to be the year that the former NXT Champion goes from a reactive to a proactive Superstar. After dispatching a local named Kenneth Johnson, Black revealed that his early elimination from the Royal Rumble Match had forced him to examine some hard truths and accept his accountability in the loss … and, perhaps, his wider situation. After taking into account his strategy the past few months, he put the Raw locker room on notice and announced he was picking a fight with them. A chilling announcement to say the least. We’ve all seen what Black can do when someone opens his door; one can only imagine what happens when he’s the one who knocks.

Owens goes it alone for the Raw Tag Team Titles 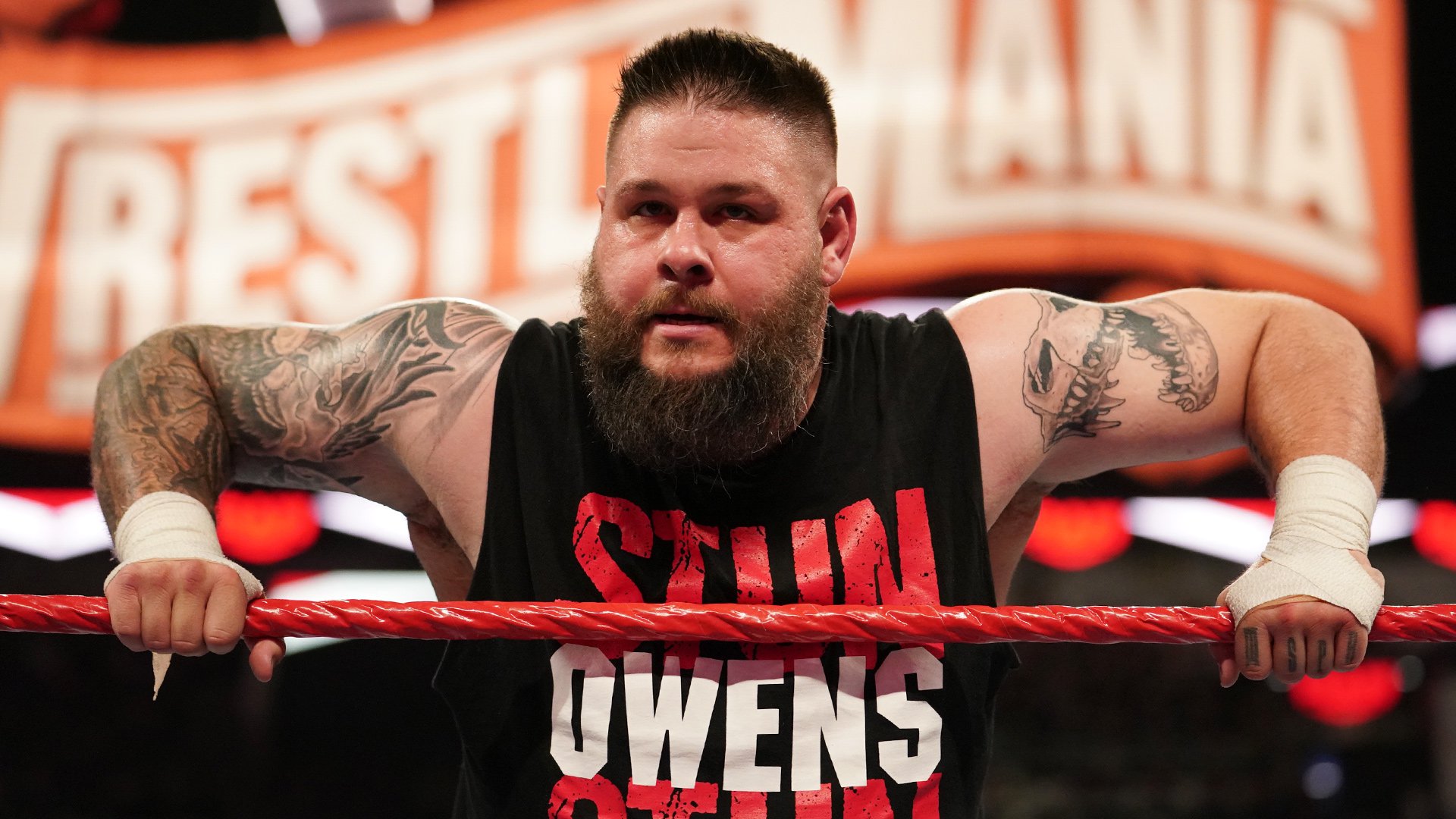 On paper, Kevin Owens & Samoa Joe finally getting their hands on Seth Rollins & Buddy Murphy is easy money, especially considering they arranged for The Viking Raiders to ambush AOP in the locker room area. But Rollins & Murphy’s Raw Tag Team Title defense against Owens & Joe went south when Joe whiffed on a suicide dive, apparently suffering an injury that took him out of the match.

Despite losing his partner, Owens fought the good fight and even had a chance to close. But without Joe at his side, KO was forced to dispatch an interfering Rollins with a Stunner, leaving him open to a roll-up from Murphy and a handful of tights that kept him down for three. Given what happened to Joe, the defeat has to sting double, but it might come down to something far simpler. Like it or not, Rollins & Murphy might just be the real deal.

Humberto Carrillo gets even with Andrade 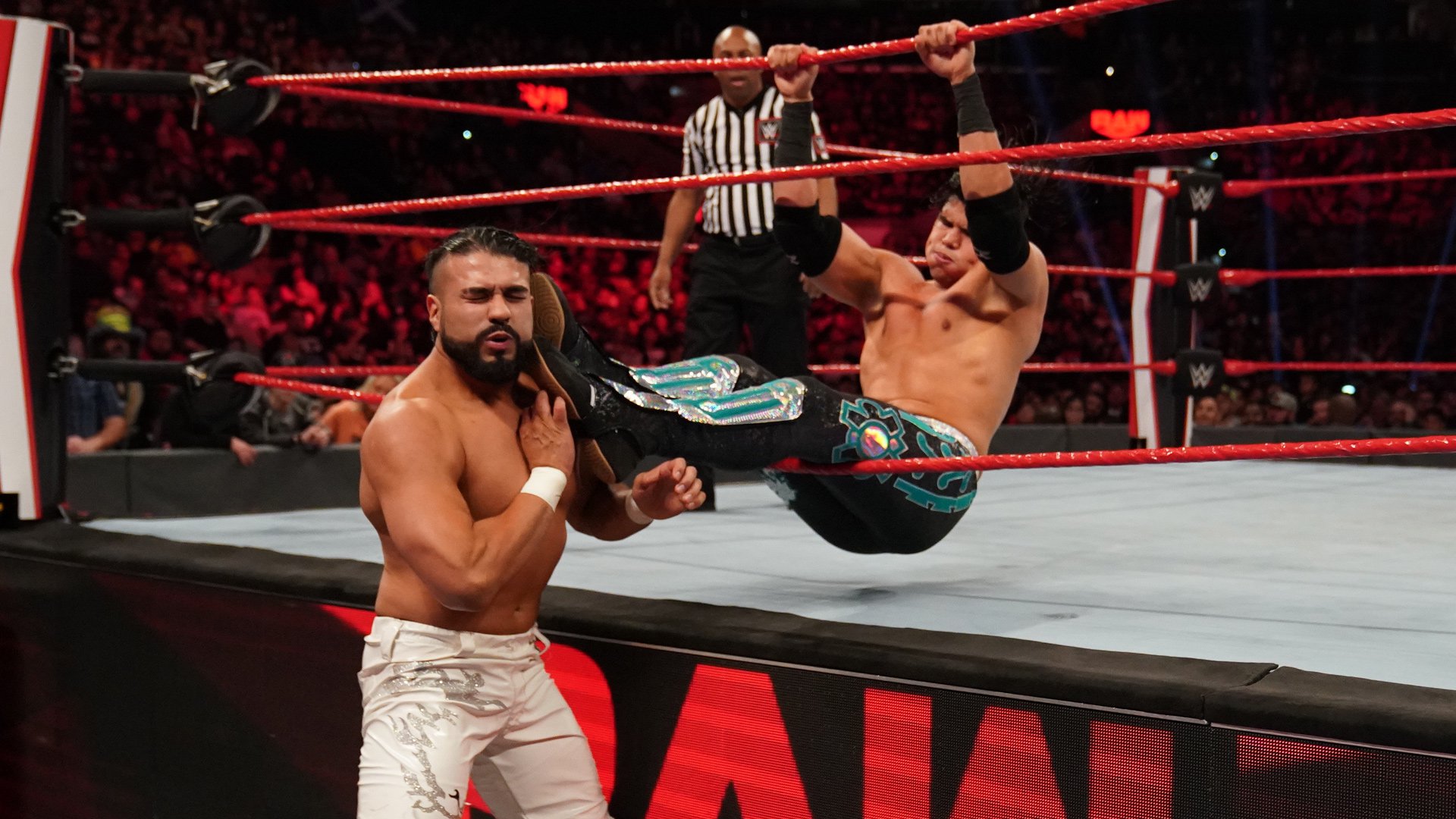 They say if you fight one person long enough you begin to take on the traits of your enemies. By the looks of Humberto Carrillo, that just might be true. After coming up short in his second challenge to Andrade in two days, the young highflyer channeled the signature aggression of the United States Champion, including his most infamous maneuver.

When Zelina Vega interfered during the match — breaking up what might have been a decisive pinfall and getting Andrade disqualified to save his title — Carrillo decided to dish out some payback, raining down blows on the United States Champion before Hammerlock DDT’ing him onto the exposed concrete. That’s the same maneuver that put Carrillo out of action several weeks ago, and his co-opting of the act is a twofold sign that bodes ill for Andrade. They’re even, and yet, somehow, this is just getting started.

Flair and Asuka square off in WrestleMania rematch 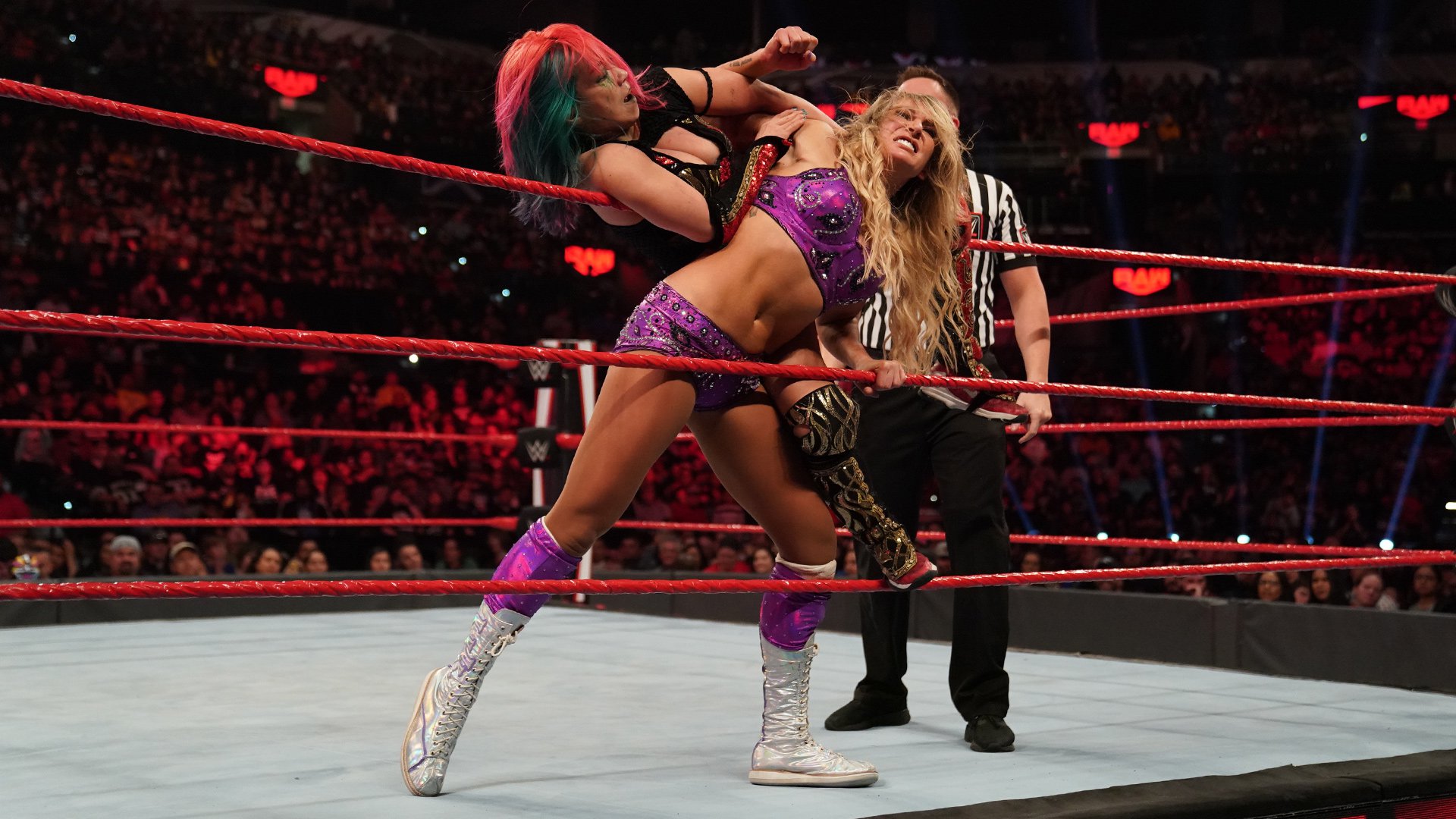 Would Asuka have won the Women’s Royal Rumble Match if she’d been in it? She seems to think so. Charlotte Flair, who actually did win the match, isn’t so sure. And even after an impromptu bout on Raw, it was no clearer which of these seemingly eternal rivals — one a reigning champion, one with a title match in her future — holds the advantage over the other.

Their match (a rematch of a WrestleMania 34 show-stealer) was at a dead heat, with counters on counters on counters and Asuka nearly wearing The Queen down with a tentacled ground game. Flair locked in the Figure-Eight, but Kairi Sane broke the hold with an InSane Elbow that gave Charlotte a disqualification win — hardly the decisive victory Flair seemed to want. With Charlotte yet to declare who she’ll challenge at WrestleMania, she undoubtedly has her future in her hands. But first, she might have to get past this reminder of her past.

What is Riddick Moss doing on Monday Night Raw? 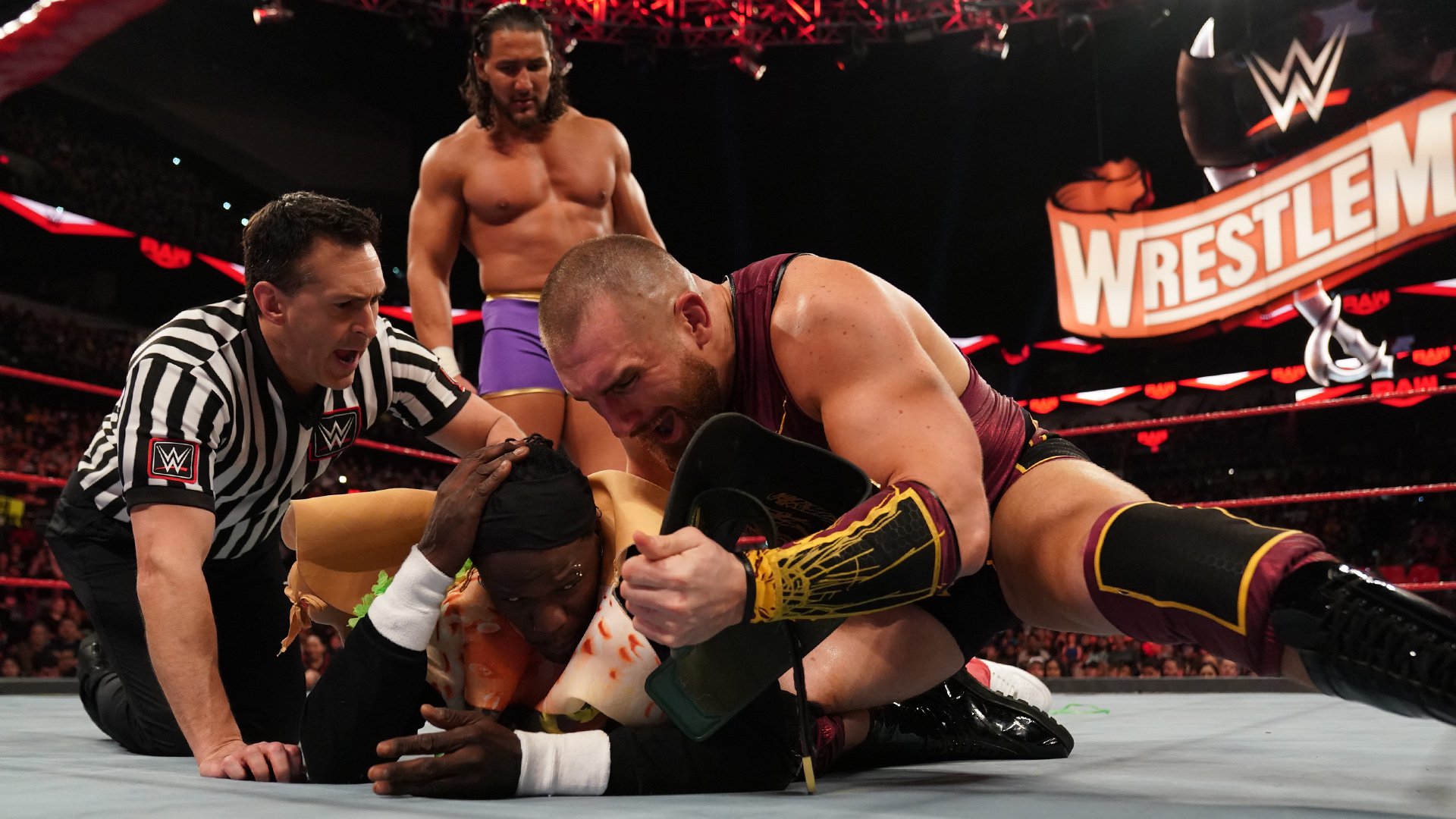 Mojo Rawley has said he’s going to be the first 24/7 Champion to openly seek out competition rather than run from it. And he made good on that promise with a match where he willingly defended the madcap title against No Way Jose — a gambit he pulled off thanks to the help of Riddick Moss, an NXT product who has apparently been recruited as Mojo’s “offensive lineman.”

Like any good lineman, Moss picked up the block, albeit not against Jose, who was quickly dispatched. After R-Truth, who had disguised himself among the conga line, pinned Rawley to win the title at the conclusion of the match, Moss blocked his exit, allowing Rawley to attack and reclaim the championship from Truth. While Mojo isn’t exactly immune to the kind of shenanigans that defined the title up to this point, Moss’ inclusion clearly complicates things for those hoping to get one over on the one guy in the 24/7 Title picture who’s not just looking to win, but fight. 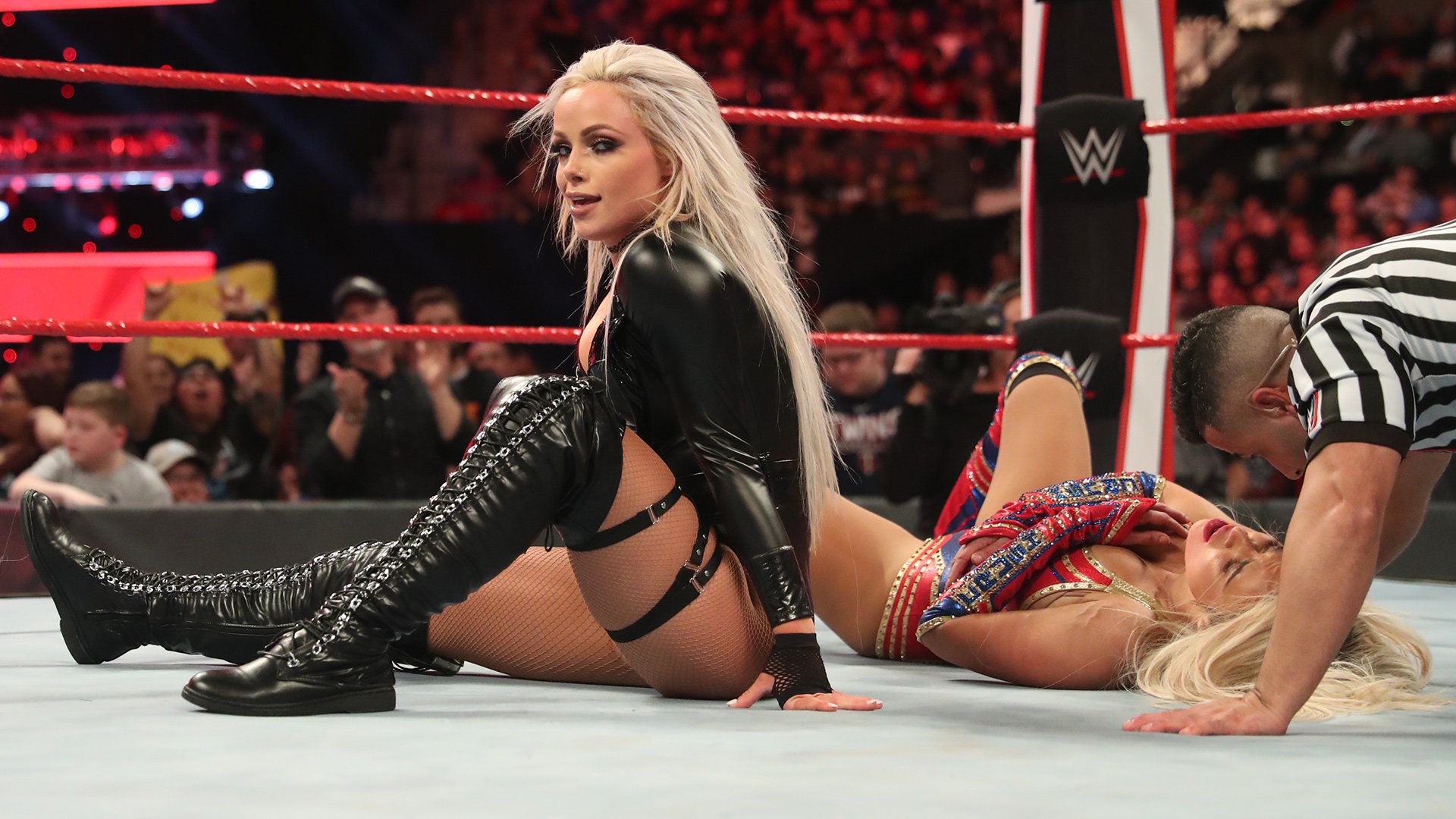 Liv Morgan finally got her hands on Lana and did not let the opportunity pass her by, defeating The Ravishing Russian in a match where Rusev and Bobby Lashley were barred from ringside. Both Superstars handled themselves pretty well without the support, but it was Liv, the self-proclaimed living embodiment of karma, who emphatically was not letting Lana get away with one this time. Liv pounced with a (very impressive!) springboard flatliner to claim the win. Will this twisted saga continue? Perhaps. But for the first time in a long time, Liv Morgan has something to smile about.

Did Rowan clear the air with the thing in his cage? 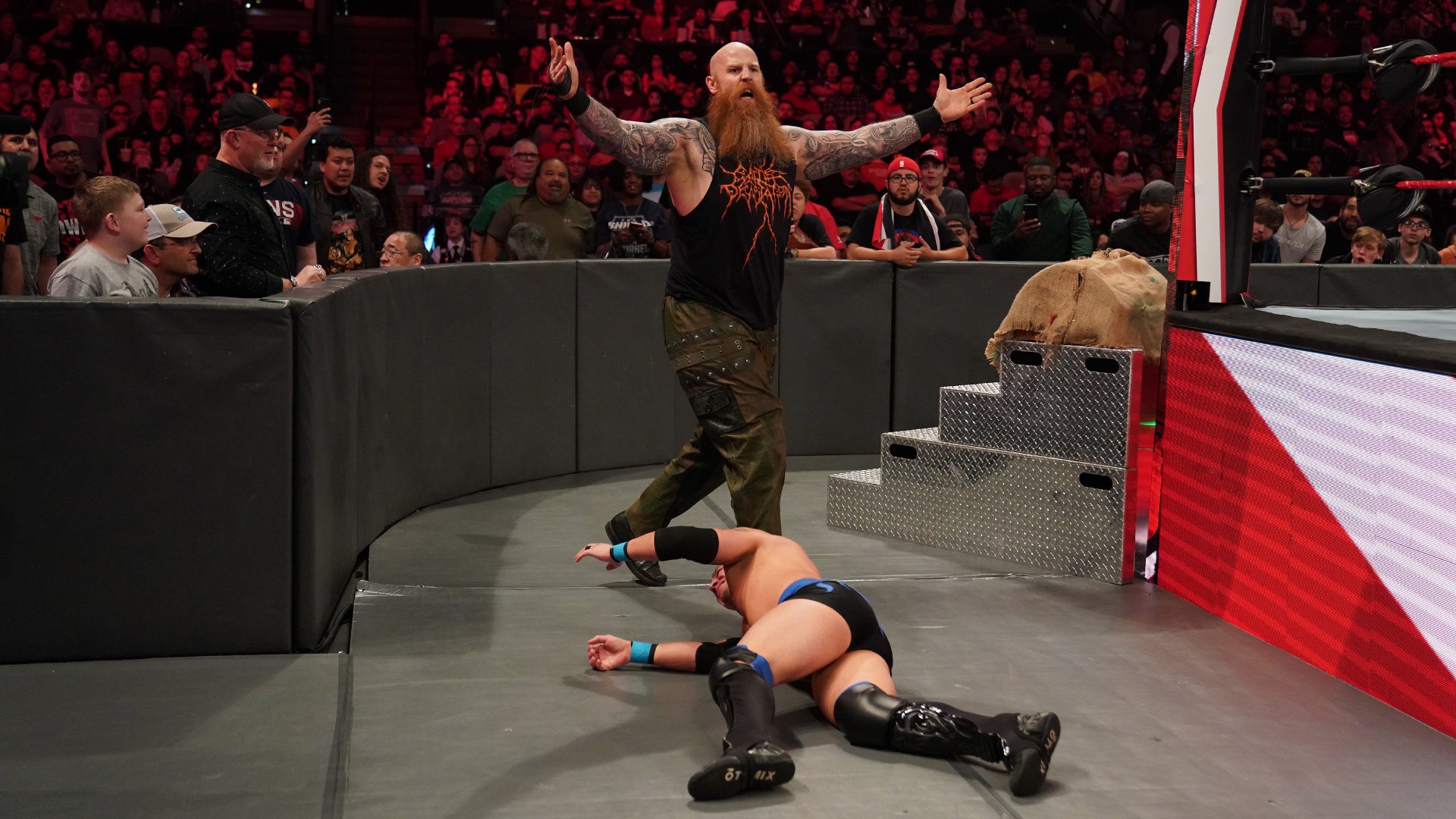 After a tense few weeks, it appears things are back to normal, or something like it, for Erick Rowan and his mysterious pet. Rowan didn’t try to open his now-signature pen this time, or remove whatever was inside it, or even pay any attention to it during his latest match. He simply bulldozed the local in his path — a poor lamb named Branden Vice — pinned him with the Iron Claw, took the pen under his gigantic arm and left. A welcome change of pace for him and a distressing return to form for everyone else. Now, he’s got nothing to distract him. 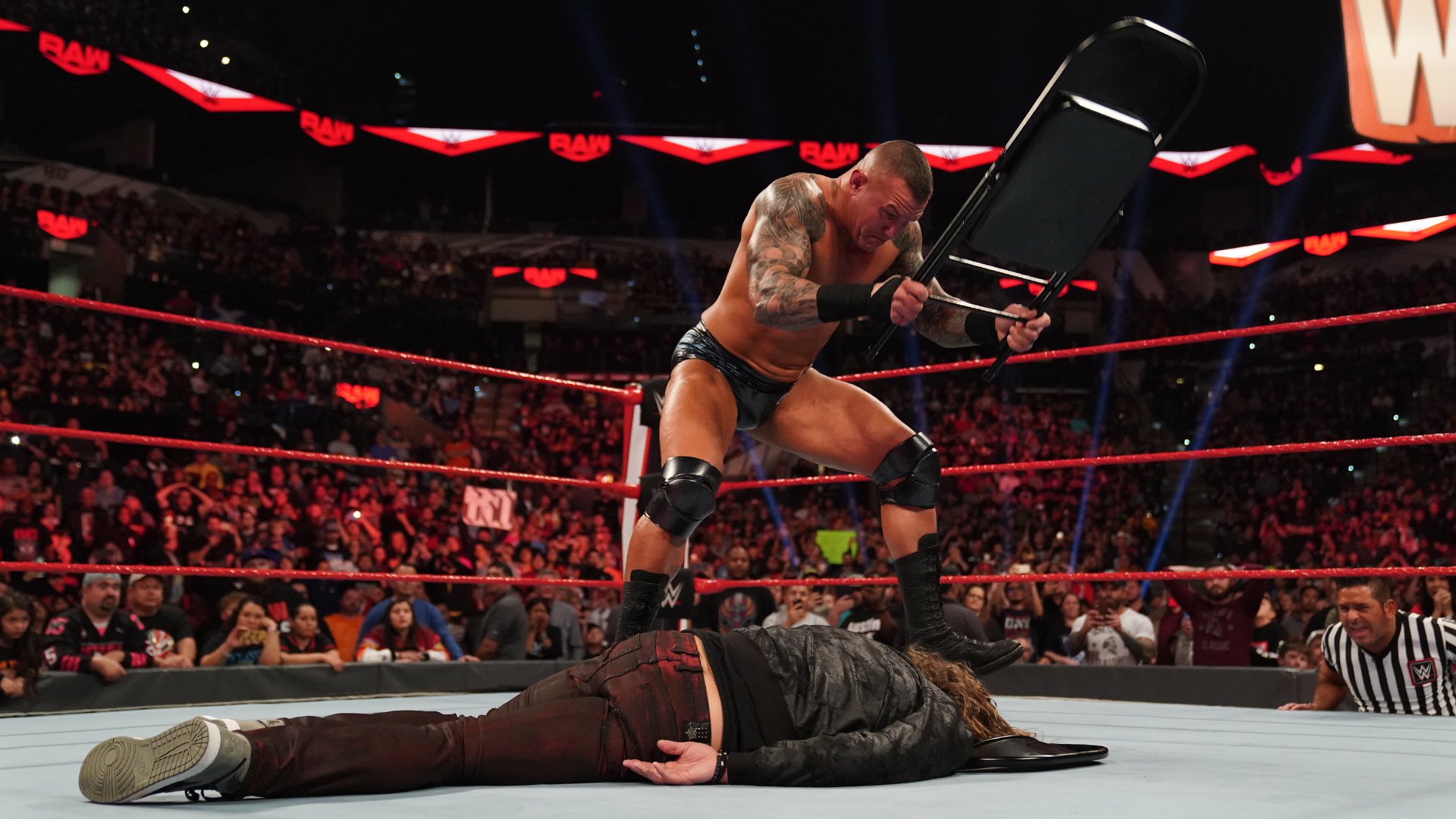 What was set to be a triumphant homecoming for WWE Hall of Famer Edge turned into a shocking scene when The Rated-R Superstar was ruthlessly attacked by Randy Orton moments after The Viper called the returning Superstar his “family.”

The severity of The Viper’s attack can’t be overstated. Returning to the brand where he was forced to retire due to neck injury nine years ago, Edge revealed he had clawed his way back from two surgeries to end his career on his terms. Although he admitted he was unsure how much time he had left in him, he refused to live in a world of “What if?” and emphasized that grit couldn’t be feigned or fabricated.

Orton arrived to seemingly propose a Rated-RKO reunion (“What if?”), only to RKO The Ultimate Opportunist, leaving the Hall of Famer writhing on the mat and clutching his neck. The Apex Predator didn’t stop there, unleashing a heinous steel chair Con-Chair-To attack that targeted the surgically repaired neck of his old friend. Of course, this doesn’t necessarily mean Edge’s return is over before it starts. “What if,” after all. But it’s looking like a very, very big “if.” 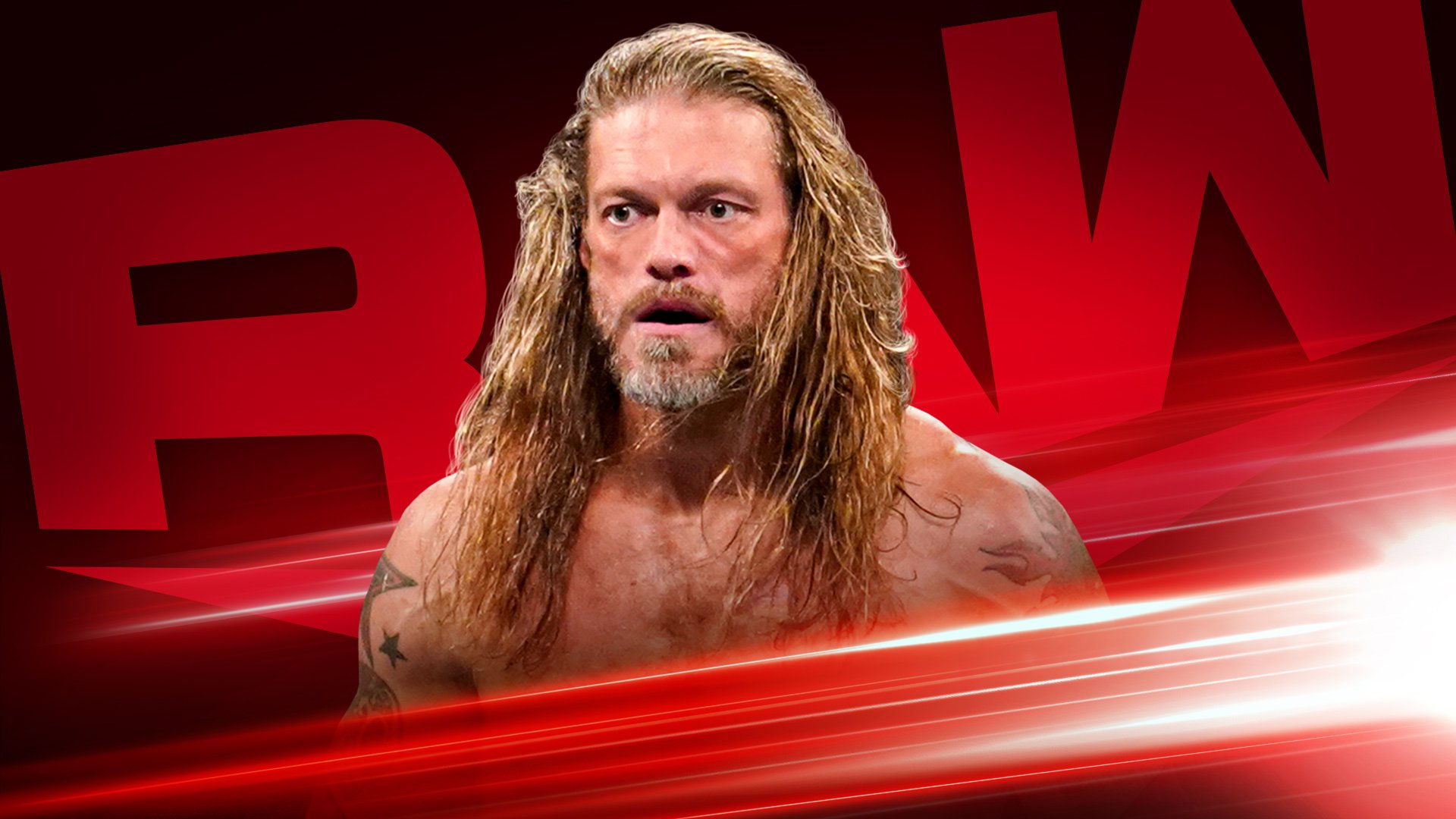 The Rated-R Superstar, who retired due to injury in 2011, has been the subject of near-constant rumors ever since he leveled Elias with a Spear at SummerSlam 2019 — speculation he shot down at every turn. But he appeared in the Men’s Rumble all the same, entering at No. 21 and lasting until the final three with SmackDown’s Roman Reigns and eventual winner Drew McIntyre. What the future holds for the former WWE Champion is still unclear. But as he returns to the brand where he once took his final bow, it’s safe to say we’ll see no small amount of emotion, triumph and, perhaps, one final opportunity? Anything is possible.

Tune into Raw, live tonight at 8/7 C on USA Network, to see The Rated-R Superstar’s return.