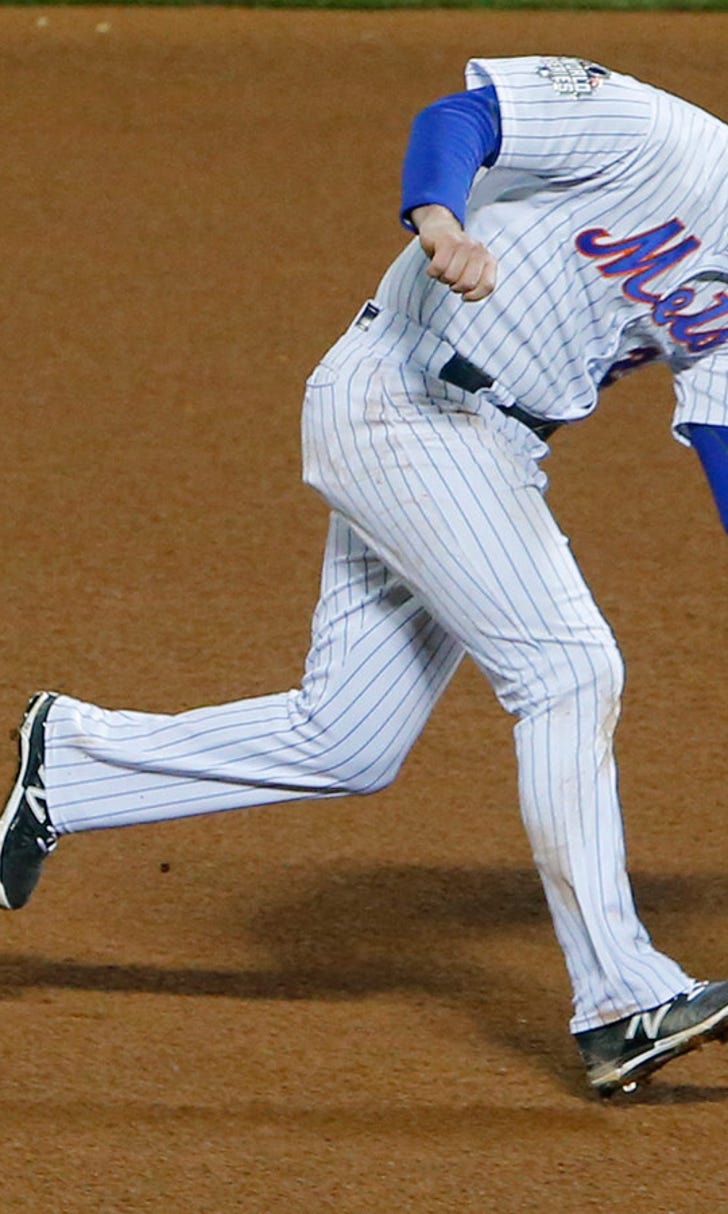 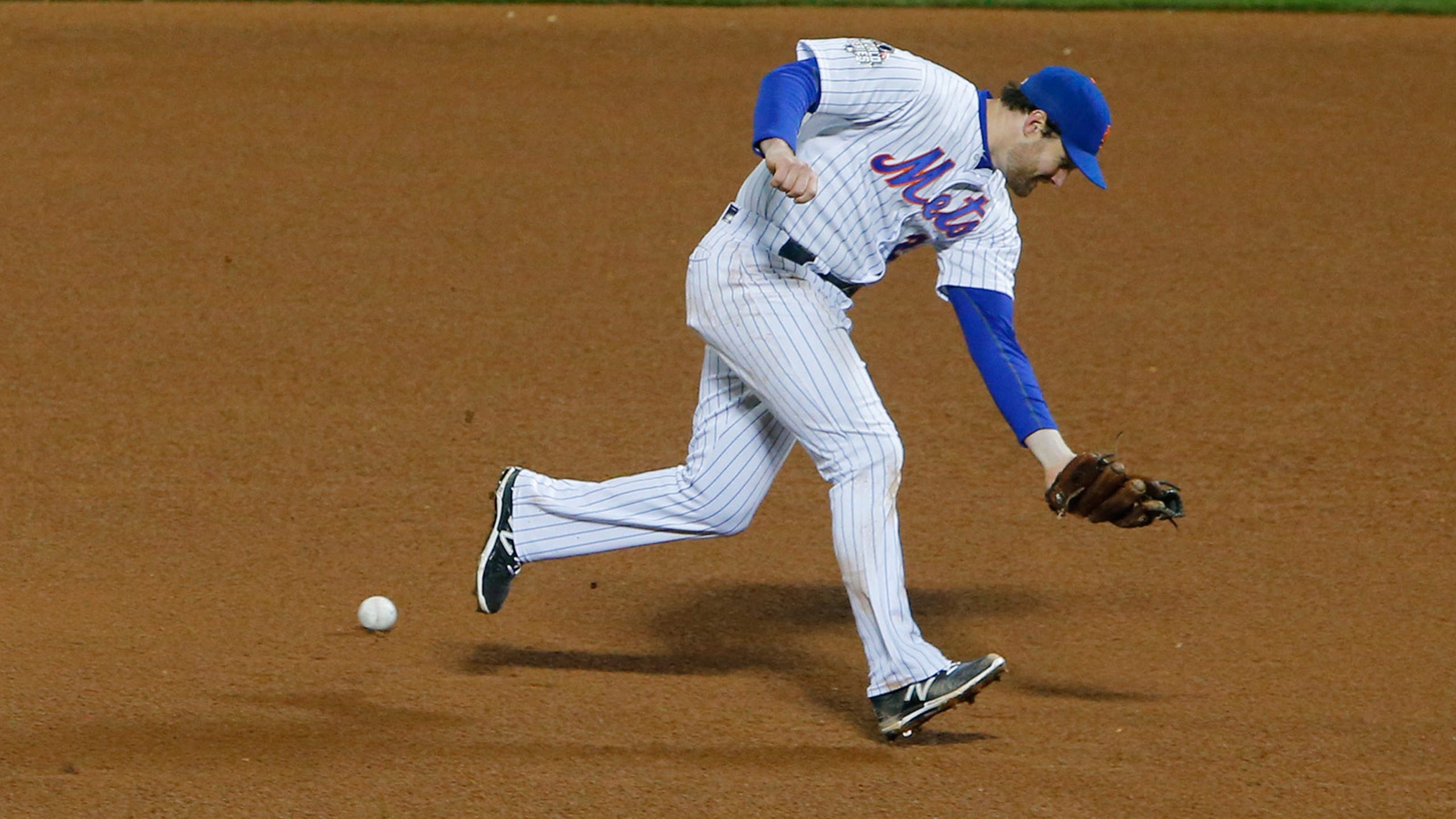 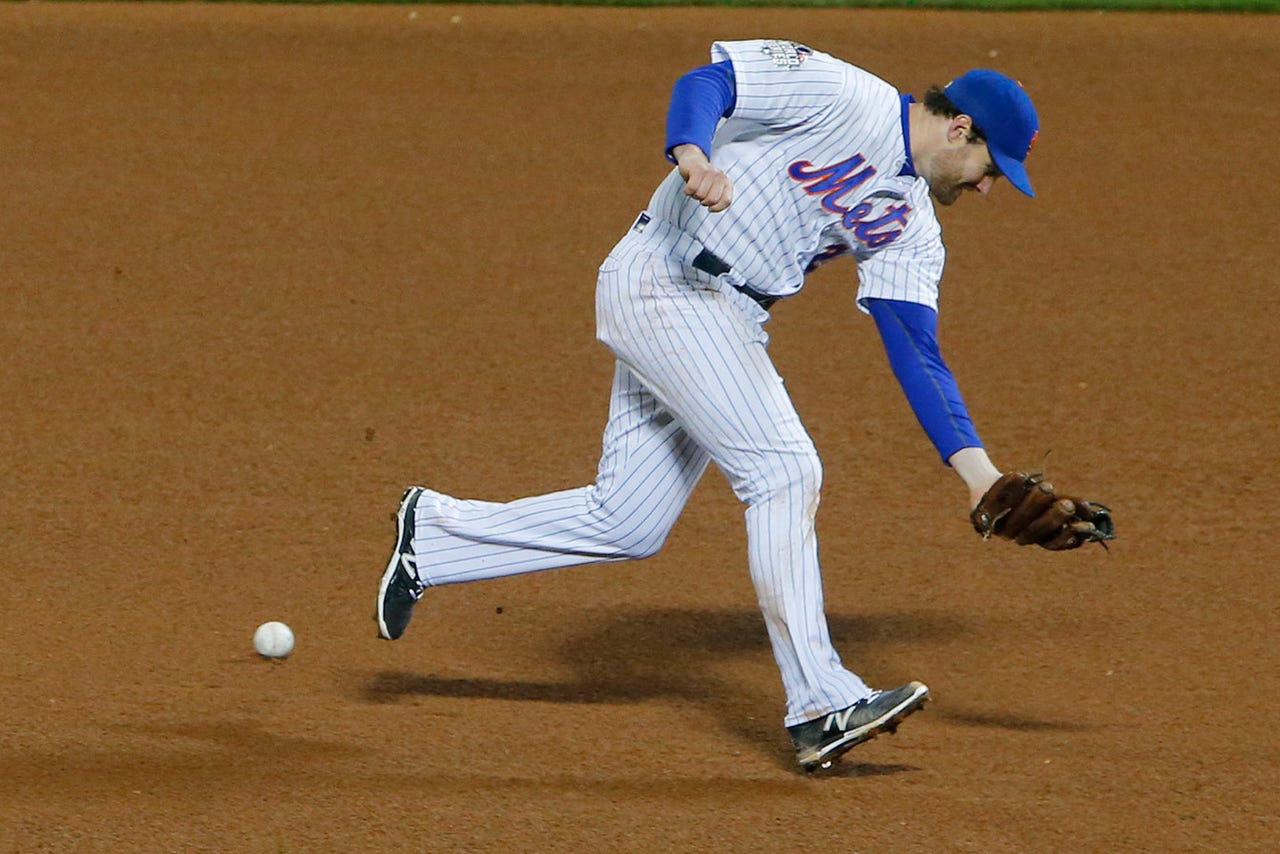 NEW YORK -- A charmed October for Eric Hosmer and the Kansas City Royals ended with one more comeback. Now, a win in November and they'll be World Series champions.

Second baseman Daniel Murphy's error on Hosmer's grounder in the eighth inning keyed another rally by the tenacious Royals, and Kansas City startled the New York Mets 5-3 Saturday night to take a 3-1 lead in the best-of-seven matchup.

"There's just a belief amongst the guys that it doesn't matter what the score is, what the lead is, what the deficit is. The guys just believe that they're going to find a way to get it done," Kansas City starter Chris Young said.

Edinson Volquez returned Saturday from his father's funeral in the Dominican Republic and can pitch the Royals to their first crown in 30 years. He faces Matt Harvey in a rematch of Game 1, when Volquez went six innings just hours after his dad died.

Seemingly spooked by the raucous New York crowd early on Halloween, the Royals rallied for the seventh time in 10 postseason victories this year, this one from a 3-1 deficit.

The Royals set a major league record with their sixth postseason comeback from at least two runs down, STATS said.

"What they did tonight, is what they've been doing the whole playoffs," Royals manager Ned Yost said.

"It's a group of guys that have the utmost confidence in themselves. I don't think at any point these guys thought that they were going to lose tonight," he said.

Neither did a pocket of KC fans who clustered behind the Royals dugout after the final out, chanting loudly for their team.

Rookie Michael Conforto homered twice as the Mets built a lead, helped when right fielder Alex Rios lost track of the outs on a sacrifice fly.

But as the calendar was an hour from flipping to November, Murphy's amazing month slipped away. So did the Mets' best chance at evening the Series, done in by another Royals late surge.

"We certainly talked about it before, they truly don't ever stop," Mets manager Terry Collins said.

With runners on first and second on a pair of one-out walks by Tyler Clippard, Jeurys Familia relieved. So steady in his new role as closer this year, Familia had allowed Alex Gordon's ninth-inning, tying homer in a Game 1 loss.

This time, he came on with a 3-2 lead and got Hosmer to hit a soft grounder toward Murphy as 44,815 fans stood, waving their orange towels in hopes of an inning-ending double play.

But the slow chopper sneaked under the glove of the NL Championship Series MVP as he charged in. Murphy, who would've had only a play at first, appeared to glance at the runner and failed to get his mitt down. The ball rolled and rolled toward right field, and Ben Zobrist raced home from second base as Familia crouched on the mound.

"There's no way to describe it. It hurts when you feel like you got a direct hand in a ballgame," Murphy said. "I didn't do the job. That's the most frustrating thing."

Surely no one in the silenced Citi Field stands expected this scary ending. It got worse for the Mets in a hurry, too.

Mike Moustakas and Salvador Perez followed with RBI singles to break away.

"Hoz did a good job of putting the ball in play and make some things happen," Moustakas said. "It's just kind of how the ball bounced today. It kind of rolled right for us."

Ryan Madson pitched a perfect seventh for the win, and Wade Davis worked two scoreless innings for his first save. Clippard took the loss.

Not known for his defense, Murphy still made every play look easy in the NLCS and almost single-handedly slugged the Mets to their first World Series since 2000 with seven homers in nine playoff games. He's lost his power in the Fall Classic but had a one-out infield single in the ninth.

Yoenis Cespedes followed with another single, but he was doubled off first base when Lucas Duda hit an easy liner to third base and Moustakas tossed it to first to finish off another incredible comeback for the Royals.

Kansas City looked as if it was under a spell in the first few innings, though, in falling behind 2-0 in the third.

Alcides Escobar started off this game much the same way he has all postseason -- with a hit -- albeit on the fourth pitch from Mets hometown rookie Steven Matz.

But Escobar was then ruled out on batter's interference when Zobrist was fooled by a sinker for strike three, his swing carrying him in front of catcher Travis d'Arnaud, who was trying to throw to second base as Escobar was attempting a steal.

The Mets had about as much success against their former teammate Young for the first couple of innings as they had in Game 1, when the 6-foot-10 Princeton grad held them hitless for the final three of the Royals' 14-inning win.

Conforto changed that with the first swing of the third inning, sending a drive the first pitch deep into the second deck in right field for his third hit in 23 at-bats this postseason.

Things got weird after that.

Wilmer Flores singled, advanced to second on Young's 55-foot pitch in the dirt and went to third on Matz's sacrifice. Curtis Granderson lifted a fly to shallow right and Rios caught the ball. But he took a step toward the dugout before center fielder Lorenzo Cain shouted at him as Flores tagged. Rios' throw was late, the Mets led 2-0, and Rios stood frozen with a hand on his hip in right field.

Things took a turn for Kansas City -- didn't it always seem to this October? -- when Alex Gordon singled home Perez in the fifth to get a run back.

Conforto pushed the lead back to two runs in the bottom half with his second long ball, a drive off Danny Duffy into the Mets' bullpen. Conforto became the first rookie to connect twice in the World Series since Atlanta's Andruw Jones did it at Yankee Stadium in 1996.

The Royals, though, merely needed a little grounder to change the Series momentum.

Royals: Volquez said he played catch Friday while in the Dominican Republic and played catch in the bullpen when he returned to New York.

Mets: For all the talk about his innings limits after returning from Tommy John surgery, Harvey has thrown 208 innings overall this year.