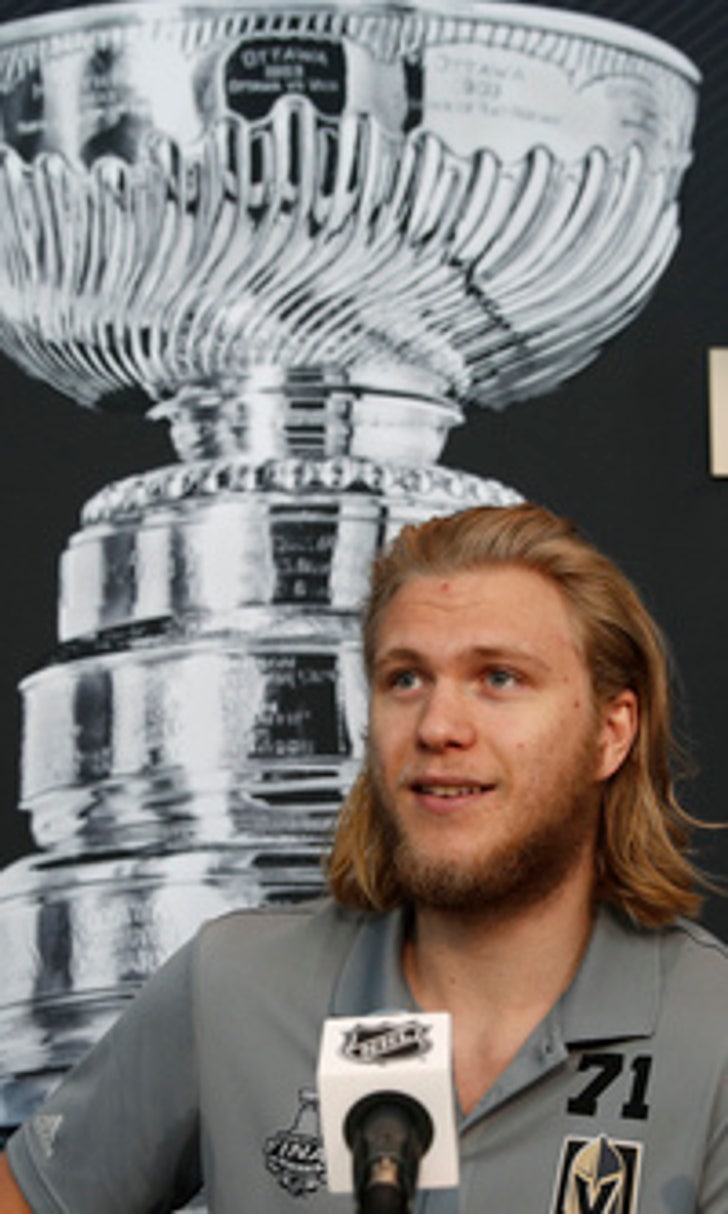 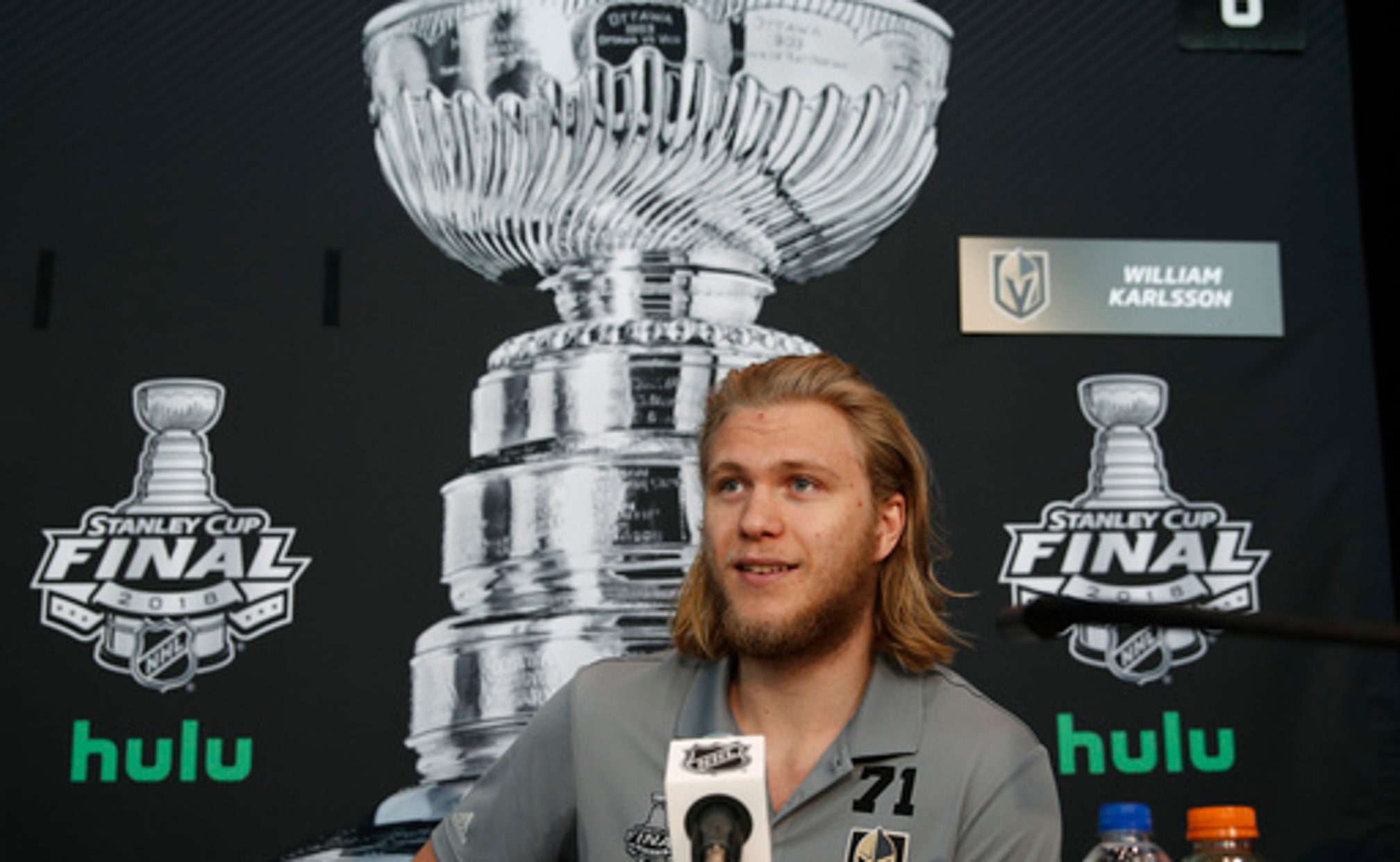 LAS VEGAS (AP) The Latest on Game 1 of the Stanley Cup between the Washington Capitals and Vegas Golden Knights (all times local):

The Washington Capitals have a high-flying, hard-hitting team and history working against them.

Tomas Nosek scored the tiebreaking goal midway through the third period and added an empty-net goal in the closing seconds to help the Vegas Golden Knights beat Washington 6-4 in Game 1 of the Stanley Cup Final.

Since the final went to a best-of-seven format in 1939, the winner of Game 1 has gone on to hoist the Cup the last six years and 61 of the last 78 times.

Boston is the last team to bounce back from losing Game 1 to win an NHL title.

The Bruins, in fact, opened the 2011 Final with two losses against the Vancouver Canucks before rallying and winning in seven games.

The Vegas Golden Knights took another step in their unlikely quest to win the Stanley Cup, beating the Washington Capitals 6-4 in a Game 1 thriller.

Fourth-line forward Tomas Nosek scored a go-ahead goal midway through the third period and had an empty-net goal with 2.7 seconds left.

Marc-Andre Fleury made 24 saves for the Golden Knights. Braden Holtby made 28 saves for the Capitals, who are 0-5 in franchise history in the Stanley Cup Final.

Shortly before the empty-net goal, Lars Eller of the Capitals had the puck go off the end of his stick blade with a wide-open net in front of him and a chance to tie the game.

The Vegas Golden Knights are showing how deep and talented they are in the Stanley Cup Final.

Tomas Nosek scored a go-ahead goal midway through the third period to give the Vegas Golden Knights a 5-4 lead over the Washington Capitals in a Game 1 thriller.

Nosek's one-timer from the right side was set up by Shea Theodore's cross-ice pass. Ryan Reaves, the third player on Vegas' fourth line, had tied the game early in the third.

Jonathan Marchessault, Vegas' leading scorer in the playoffs, walked off the ice and toward the Golden Knights' dressing room after taking an open-ice check.

Washington's Tom Wilson landed a blind-sided hit on Marchessault well after he got rid of the puck near center ice.

Wilson was later called for interference against Marchessault after the officials gathered to discuss what happened. David Perron, who had come off Vegas' bench, was penalized for cross-checking Alex Ovechkin during the same stoppage of play 5:53 into the third period.

Marchessault later returned to the ice.

Vegas and Washington are putting on a show in the Stanley Cup Final opener.

Tom Wilson put the Capitals ahead early in the third period and Ryan Reaves evened the score at 4-all for the Golden Knights just 1:31 later, setting up a fantastic finish in Game 1.

Wilson finished off a sequence in which he and his teammates, including Alex Ovechkin, finally found some time and space with the puck against the speedy, swarming Golden Knights.

That quieted the Vegas crowd, but not for long. Reaves scored the game-tying goal by lifting a loose puck over Braden Holtby.

It's all tied up after the first two periods in Game 1 of the Stanley Cup Final.

The Vegas Golden Knights killed their first penalty with a little help from the post behind Marc-Andre Fleury as John Carlson drew iron on a shot late in the second period. Moments later, Fleury gave the post to his right a friendly tap with his right glove to give thanks after his team was penalized for having too many men on the ice.

The Golden Knights and Capitals head into the third period tied 3-3 after an entertaining opening to a series between two teams seeking their first NHL championship.

One of the hottest shows on the Strip isn't showing signs of slowing down.

Reilly Smith put the Vegas Golden Knights ahead early in the second period and John Carlson pulled the Washington Capitals into a 3-3 tie as Game 1 of the Stanley Cup Final reached the halfway point.

Just like the opening period, Vegas was able to generate more offense. The Golden Knights were outshooting the Capitals 10-5 midway through the second and 21-15 overall.

Both teams had some trouble keeping the puck settled at times. Crews were working on the ice during stoppages in play, adding water and shoveling shavings away.

The Vegas Golden Knights and Washington Capitals are tied 2-2 after a wild first period in Game 1 of the Stanley Cup Final.

Brett Connolly and Nicklas Backstrom scored 42 seconds apart to put the Capitals ahead and William Karlsson answered with a goal late in the period.

Both teams took advantage of having players with soft hands, allowing them to redirect rolling and wobbling pucks into the net.

Washington's Braden Holtby withstood a flurry of shots early in the period and finished the opening 20 minutes with nine saves. Marc-Andre Fleury didn't have to stop a shot for more than five minutes before Washington woke up.

Colin Miller fired up the home crowd by scoring 7:15 into the game on a power play, slapping a shot past Holtby, who appeared to be screened. Washington roared back with two goals.

The Vegas Golden Knights have jumped out to a 1-0 lead less than 10 minutes into the opening game of the Stanley Cup Final against Washington.

Colin Miller scored 7:15 into the game on the power play, slapping a shot past Braden Holtby, who appeared to be screened.

Vegas had five shots before the Capitals had one. After they finally got a shot on net 5-plus minutes into the game, Washington's Andre Burakovsky was called for boarding to give the Golden Knights the first power play of the final.

The Golden Knights pulled out all the stops for an extravagant pregame show. Famed ring announcer Michael Buffer yelled ''Let's get ready to rumble!'' before announcing starting lineups.

The teams came out flying, playing with plenty of speed and energy in front of a fired-up crowd that went wild as Vegas opened the scoring.

The Strip was packed with people fired up about the Stanley Cup Final.

Fans began filling up the plaza outside T-Mobile Arena several hours before Game 1 despite 94-degree temperatures. The parking lots and casino restaurants nearby were jammed with people decked out in costumes ranging from suits of armor to a Sasquatch.

After a pregame concert from hip-hop star and Golden Knights fan Lil Jon, the crowd kept growing until the plaza was packed an hour before the puck dropped.

Inside the arena, fans of both teams crowded around the glass before pregame warmups. The concourse was filled with Vegas touches from showgirls taking photos with fans to the wildly costumed dancers from the cast of Mystere, the long-running Cirque du Soleil show at the Treasure Island casino.

Much earlier in the day, fans began lining up at City National Arena, the team's practice facility in the suburbs, to get a wristband that allowed them watch the Golden Knights' optional morning skate. By 5:30 a.m. the line grew to 20 people to watch the morning skate later in the morning.

NHL Commissioner Gary Bettman insists there's no delay in deciding if Seattle will have a team in the league.

Bettman reiterated Seattle's bid will not be up for conditional approval at the NHL Board of Governors in June.

Seattle's ownership group will have to pay a $650 million expansion fee and make arena improvements to play in the NHL as soon as 2020.

''The building still has to be renovated,'' Bettman said before Vegas hosted Washington in Game 1. ''So, there's plenty of time to deal with the issues that have to be dealt with.''

Houston also has been mentioned as a candidate for an NHL team.

The Washington Capitals or Vegas Golden Knights will win the Stanley Cup for the first time.

History suggests the winner of Game 1 has the odds in its favor.

The team winning the opener the previous six years ended up hoisting the Cup. Since the Stanley Cup Final went to a best-of-seven format, the winner of Game 1 has gone on to hoist the Cup 61 of 78 times.

Washington has its second shot to earn the Cup, hoping it fares better than in 1998 when Detroit won in a sweep.

Vegas is aiming to be the first franchise in a major North American professional league to win a title in its first season since the NFL's Cleveland Browns in 1950.