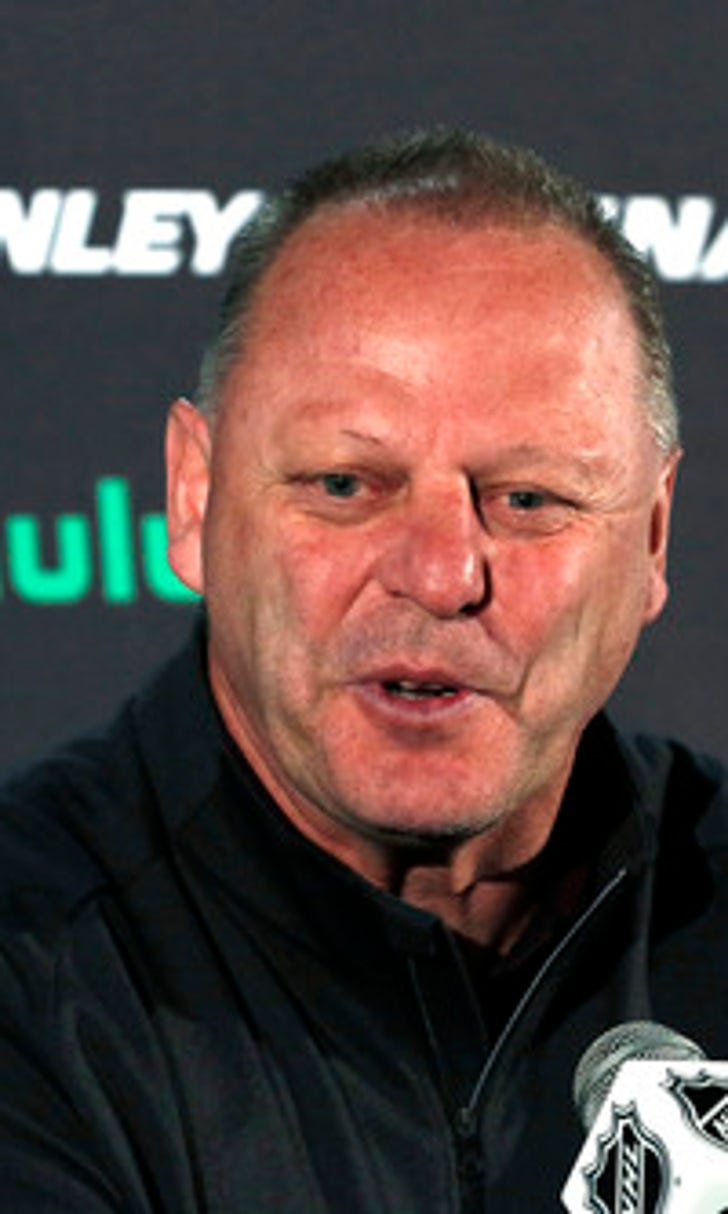 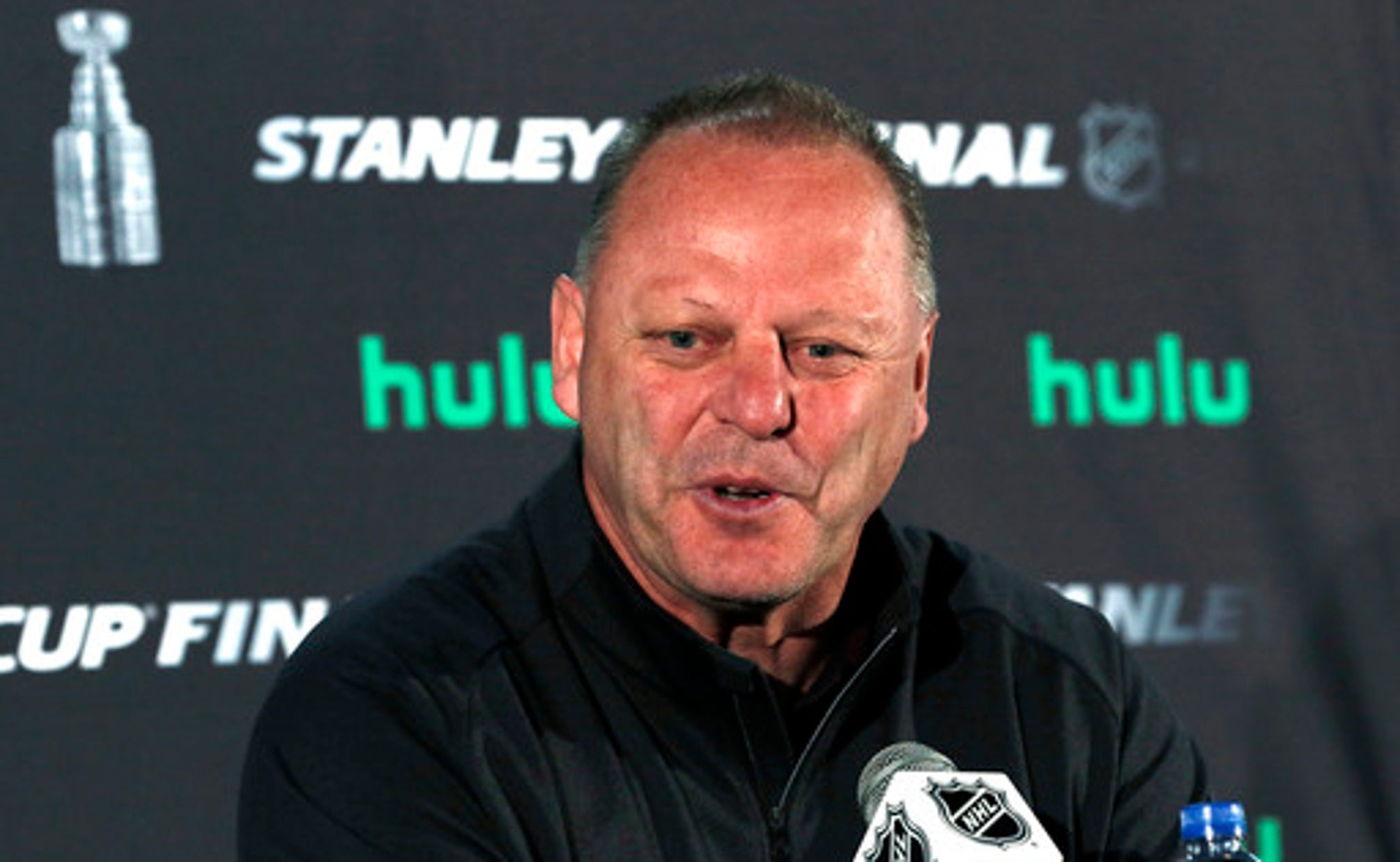 The Latest: Fall Out Boy jams before Game 4 of Cup Final

WASHINGTON (AP) The Latest from Game 4 of the Stanley Cup Final between the Washington Capitals and the Vegas Golden Knights (all times local):

The Washington Capitals are one win away from the first Stanley Cup championship in the 43-year history of the franchise.

T.J. Oshie, Tom Wilson and Devante Smith-Pelly all scored in the first period and the Capitals cruised from there in routing the Vegas Golden Knights 6-2 to take a commanding 3-1 lead in the best-of-seven series.

Only the 1942 Detroit Red Wings have blown a 3-1 series lead after winning the first three games against Toronto.

James Neal has ended a long scoring drought for the Vegas Golden Knights and Reilly Smith added another goal, but the Washington Capitals still lead 5-2 late in Game 4 of the Stanley Cup Final.

Neal scored 5:43 into the third period. He had missed an open net in the first period, when the game was scoreless. His goal broke up Braden Holtby's shutout bid. It was the first goal against Holtby in 62:14 of ice time, since Game 3.

Smith added another with 7:35 left in the game, but Michal Kempny answered with a goal little more than minute later to restore a three-goal lead.

The Capitals are looking to take a 3-1 lead in the best-of-7 series that continues with Game 5 on Thursday night in Las Vegas.

The Washington Capitals are 20 minutes away from a commanding 3-1 lead in the Stanley Cup Final against the Vegas Golden Knights.

John Carlson scored the only goal of the second period on a power play at 15:23, giving the Capitals a 4-0 lead. T.J. Oshie, Tom Wilson and Devante Smith-Pelly all scored in the first period.

Vegas is still trying to find a way to put the puck past goalie Braden Holtby.

The Golden Knights have not held the lead since Game 1 and have been outscored 10-3 since winning the opener. Game 5 is Thursday night in Las Vegas.

The Washington Capitals got three goals in the first period of Game 4 and are spending much of the second period making sure the lead stands up against the Vegas Golden Knights.

Striving to take a 3-1 lead in the best-of-7 Stanley Cup Final, the Capitals have killed a pair of power plays to maintain a three-goal cushion.

Vegas has a 20-13 advantage in shots on goal, but Washington has goals from T.J. Oshie, Tom Wilson and Devante Smith-Pelly.

The Capitals have not trailed at any point since their Game 1 loss.

High schooler Jack Merritt threw a crab on the ice after Game 3 of the Stanley Cup Final and hopes it becomes a Washington Capitals tradition.

The 15-year-old from Chevy Chase, Maryland, said before Game 4 that a crab is better than the ''stupid'' plastic flamingo thrown onto the ice to celebrate Vegas Golden Knights wins. He knows all about the plastic rats in Florida, the octopi in Detroit and the catfish in Nashville. He wants crabs to be a thing at Capital One Arena after Washington victories.

Merritt bought a crab from a local restaurant before Game 3 and brought it into the arena with hope. He got down to the lower bowl from his upper-deck seats and managed to get the crab on the ice after the Capitals beat the Golden Knights 3-1 to take a 2-1 series lead.

Without tickets to Game 4, Merritt only hopes someone else follows his lead.

Capitals fans had plenty to cheer about during the first period of Game 4 of the Stanley Cup Final after goals by T.J. Oshie, Tom Wilson and Devante Smith-Pelly.

They also got to cheer during a TV timeout.

Two months after the Humboldt Broncos' bus crash killed 16 in Canada, forward Kaleb Dahlgren from the Saskatchewan junior league was shown on video screens at Capital One Arena.

Dahlgren got a nice reaction from the crowd and then a roar when he lifted up his yellow Humboldt jersey to reveal a red Capitals jersey.

The Washington Capitals have taken a 3-0 lead into the first intermission of Game 4 of the Stanley Cup Final against the Vegas Golden Knights.

Washington is looking to take a 3-1 advantage in the best-of-7 series.

Tom Wilson and Devante Smith-Pelly both scored in the final four minutes of the period after T.J. Oshie put the Capitals on top with a power-play goal 9:56 into the game.

Wilson is known for hard checks and time spent in the penalty box, but on this occasion he beat Vegas goaltender Marc-Andre Fleury with a shot from the slot at 3:58. Not long after that, Smith-Pelly scored from a tough angle on the left side after a weird bounce.

Earlier, with the game scoreless and the Golden Knights on the power play, Vegas winger James Neal hit the post in front of an open net.

T.J. Oshie has given Washington an early 1-0 lead over Vegas in Game 4 of the Stanley Cup Final.

Evgeny Kuznetsov's shot off Vegas goaltender Marc-Andre Fleury rebounded to Oshie in front of the net and he jammed it home on the power play 9:54 into the first period.

The Golden Knights look much quicker on offense than in Game 3, when they took only 22 shots. James Neal missed a golden opportunity to open the scoring, hitting the right post when firing at an open net.

It is the third straight game the Capitals have scored first and they have won the last two for a 2-1 series lead.

The puck has dropped, and Game 3 of the Stanley Cup Final is under way in the nation's capital with Vegas trying to even the series against Washington at 2-2.

The Golden Knights are starting Tomas Tatar in place of David Perron, who was scratched. Perron has not scored a goal in 14 playoff games.

The atmosphere was electric before the game. Max Scherzer and Ryan Zimmerman of the Washington Nationals baseball team were introduced as the ''Fans of the Game.'' Nationals slugger Bryce Harper, who grew up in Las Vegas, was wearing a white Golden Knights Jersey.

The fans waved white glow sticks and waved towels before the national anthem.

Game 5 is Thursday in Las Vegas.

Red-clad fans are filling the streets of Chinatown before Game 4 of the Stanley Cup Final between the Washington Capitals and Vegas Golden Knights.

Fall Out Boy is playing the pregame concert at the Smithsonian National Portrait Gallery, two days after Sting and Shaggy. The strains of ''My Songs Know What You Did In The Dark'' could be heard blocks away over the sound of scalpers looking for hard-to-find tickets.

According to Ticket IQ, the cheapest Game 4 tickets are up almost $400 from last week. The cheapest tickets available on Ticket IQ and StubHub are more than $1,000 each.

The Vegas Golden Knights are making at least one lineup change for Game 4 of the Stanley Cup Final by plugging in offensive-minded winger Tomas Tatar.

Vegas has scored three goals against the Washington Capitals in the past two games and fallen behind 2-1 in a series for the first time in the playoffs. Coach Gerard Gallant says he hopes Tatar adds some offense and speed to a group that lacked both in a Game 3 loss Saturday.

Tatar has not played since Game 3 of the Western Conference final against Winnipeg. It looked as if Tatar would replace struggling winger David Perron in Game 4, though Gallant on Monday refused to confirm that scratch and alluded to at least one other possible move.

The Golden Knights traded a 2018 first-, 2019 second- and 2021 third-round pick to Detroit for Tatar at the deadline. He has dressed in just six of 19 playoff games, scoring one goal.

Tatar did score the most goals against the Capitals this season: four in two games with the Red Wings, including an overtime winner.