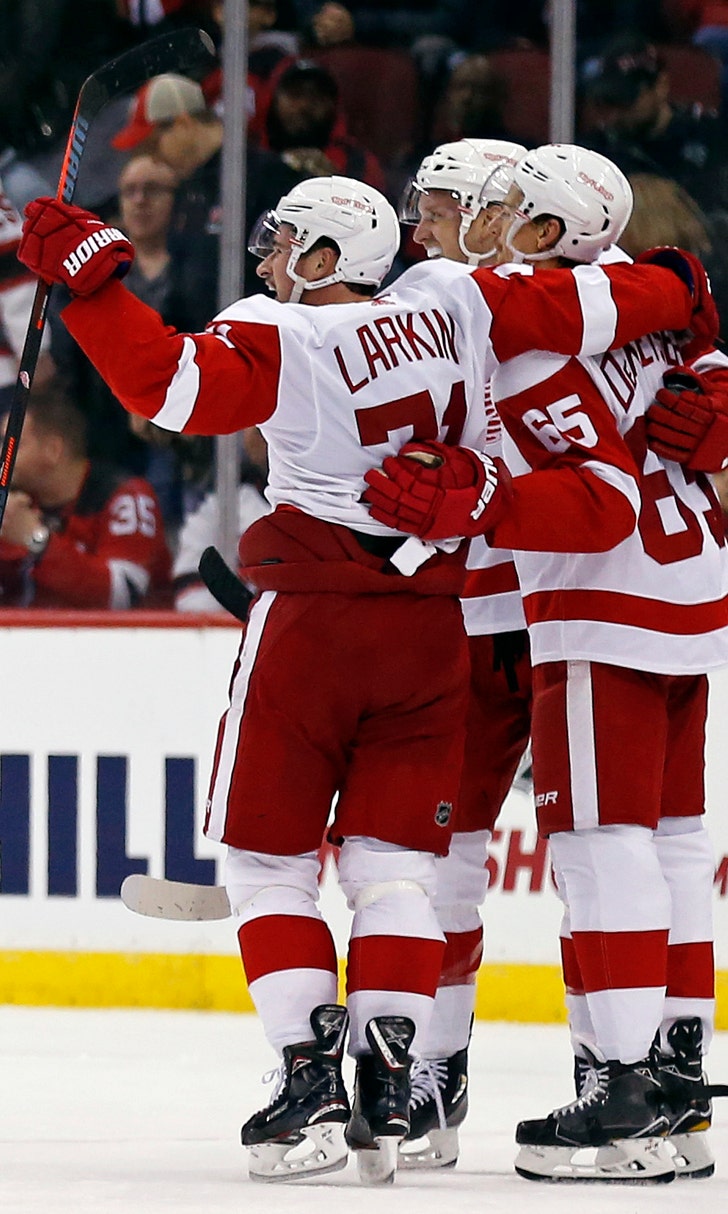 NEWARK, N.J. (AP) — Dylan Larkin and the Detroit Red Wings are gaining confidence with each win.

Rallying on the road sure helps.

Larkin got his eighth goal of the season when he converted a 2-on-1 break with Anthony Mantha. It was Detroit's fifth victory in its last six games.

"It's awesome and feels good coming in here after games and we've come back from behind, finding ways to win instead of last year, when it was going the opposite way," Larkin said. "Seems like now it's a different way every time."

New Jersey had won two in a row. Pavel Zacha and Blake Coleman scored for the Devils, and Keith Kinkaid made 28 saves.

The Devils dominated the opening period, outshooting the Red Wings 15-4 and taking the lead on Zacha's first goal of the season at 11:35. Zacha dropped to one knee to snare a cross-the-slot pass from Jesper Bratt and drive a one-timer by Bernier.

The 21-year-old Zacha, the No. 6 pick in the 2015 draft, was sent to the minors earlier this month, with the goal of improving his shot selection and net presence.

"It was one of the things they wanted me to work on," Zacha said. "When you play with the players I play with, they are always trying to find you. It could help me a lot to score more goals, and help the team."

It was a tough opening period for the Red Wings, who lost Darren Helm to an upper-body injury when he was checked along the boards in the New Jersey end.

Detroit played better at the start of the second and generated several good chances. Kinkaid denied Larkin on a prime scoring opportunity, and Trevor Daley hit the post.

But New Jersey opened a 2-0 lead when Coleman scored the Devils' first short-handed goal of the season at 15:53.

The Red Wings finally got on the board when Glendening flicked a quick shot from the left circle past a screened Kinkaid with 1:34 left in the period.

In the third, Rasmussen tied it at 2 on a deflection of Mike Green's point shot at 13:37. The Devils unsuccessfully challenged the goal, claiming goaltender interference.

The momentum had clearly shifted, and so had the confidence level of the Red Wings.

"Confidence is the biggest factor to success in the NHL today because of how close every team is, and how close every player is," Red Wings coach Jeff Blashill said. "I can't say that enough times. I don't know if it's understood totally from the outside, but it's the biggest factor. As you win, you gain confidence and certainly gain some swagger."

Now it's the Devils who could use some swagger after a strong start turned into a disappointing home loss, dropping their record to 3-6-1 in the last 10 games.

"The majority of the game we did some things we wanted to do," Devils coach John Hynes said. "At the end of the day, we made some mistakes and they wound up in our net."

Devils: At Carolina on Sunday.