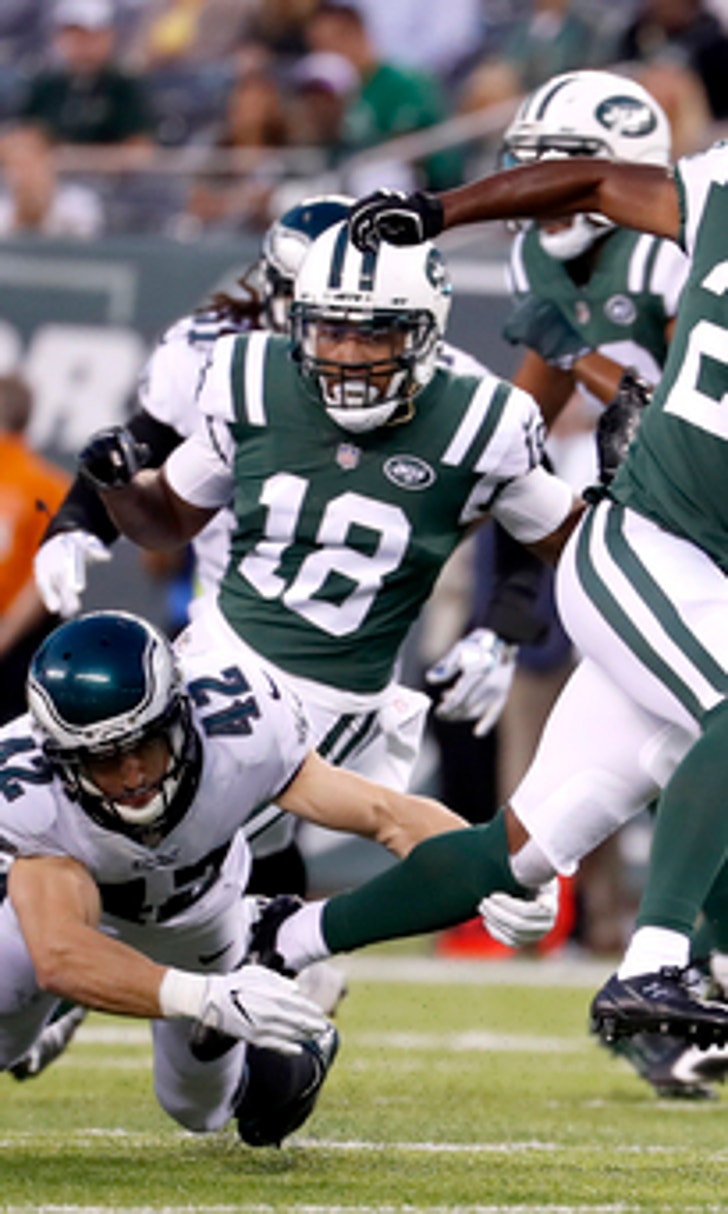 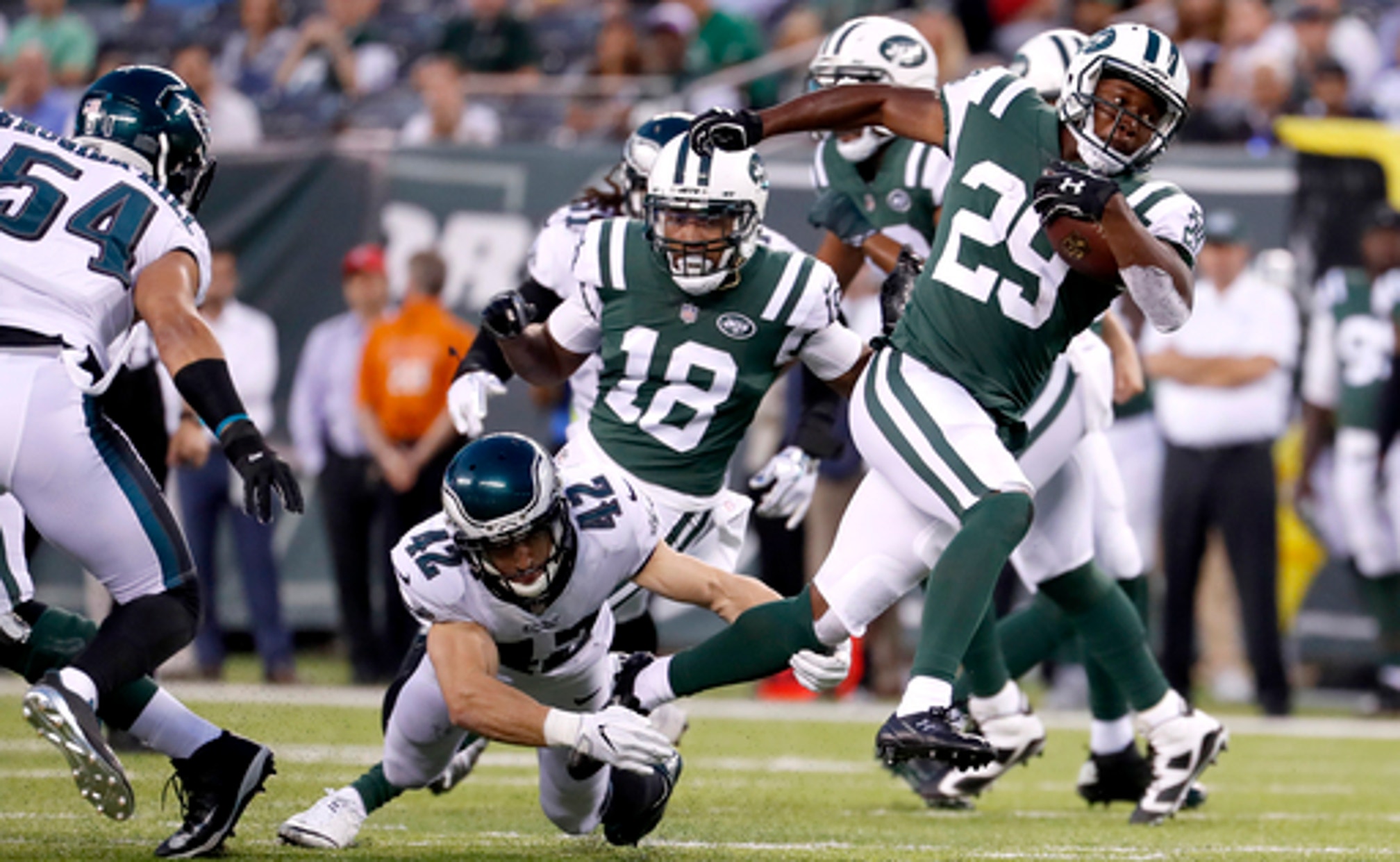 With Powell back, Jets look to get running game off ground

FLORHAM PARK, N.J. (AP) The New York Jets' running game was running through, over and past opposing defenses just a few weeks ago.

Lately, though, it has ground to halt.

''Inconsistency in the running game hurts,'' running back Matt Forte said, ''because you don't want to put all the pressure on the passing game.''

The Jets are ranked 18th in the NFL in rushing offense, helped in large part by their dominant performance in Week 4 when they ran for 256 yards against Jacksonville .

In the two games since, New York has combined to rush for just 118 yards - 34 at Cleveland and 74 against New England. Forte was sidelined two games with turf toe, but returned last week and finished with 22 yards.

Bilal Powell missed that game with a strained calf, but he's expected to play at Miami on Sunday. That will give the Jets a full stable of running backs, including rookie Elijah McGuire and Travaris Cadet, for the first time since they last played the Dolphins in Week 3.

''It will give us another healthy body,'' coach Todd Bowles said about Powell's return, ''so hopefully we can make some plays.''

Miami, which ranks No. 4 in the NFL against the run, gave up 103 yards rushing against the Jets in the last meeting. New York used a balance rushing attack in that game, with Powell running for 37 yards on 15 carries, McGuire 34 on seven carries and Forte 25 on eight attempts.

''It's something that you can keep defenses on their toes with,'' Powell said, ''when you have running backs who are able to do everything.''

The Dolphins' defense is much-improved since that first game, though, with Rey Maualuga starting at middle linebacker and Jordan Phillips at defensive tackle after both were sidelined with injuries. Linebacker Lawrence Timmons will also start after was suspended for the teams' first meeting after he went AWOL the week before.

''They were tough before their starters got back, but any time you get three starters back, that has to give a boost to your defense, and those guys can play ball,'' Bowles said. ''They've played ball for a while, so (it) can't do anything but help them. They looked great last weekend.''

Miami trailed Atlanta 17-0 at halftime last Sunday, but the defense tightened on the Falcons' high-flying offense for the final two quarters - allowing Jay Cutler and the Dolphins to pull off a 20-17 comeback victory.

''They're playing really hard up front, especially,'' Jets offensive coordinator John Morton said. ''The pass rush, they have a couple of different linebackers from the last time that we played. They're playing really solid football, creating turnovers and everything, so we have to be ready for that.''

The Jets also know that they've got to re-establish their running game in order for Josh McCown and the passing game to be effective.

''It's just being able to control the line of scrimmage and just try to get downhill toward them,'' Powell said. ''They're a good defense.''

McCown talked earlier in the week about how balance - running and passing - is important to how the offense functions. Getting Powell, who ran for 163 yards against Jacksonville, back in the mix could go a long way in helping boost the ground game.

''Any time you have a player like that and he's out, it's a factor,'' McCown said. ''You miss him. I think Matt, Eli and Travaris did a good job, but obviously Bilal is a spark player for us. He's a guy that can provide big plays.''

Powell said he's 100 percent healthy after sitting out last week, when he was reduced to being a spectator as the Jets fell to the Patriots 24-17 .

''I'm not worried about last Sunday,'' he said. ''I'm focused right now on Miami and just looking to go get a win.''

NOTES: DE Muhammad Wilkerson is listed as questionable after not practicing all week because of a sprained shoulder and a foot injury. Bowles said Wilkerson will be a game-time decision - as he was last Sunday, and he played. ''They are not getting any worse,'' Bowles said of Wilkerson's injuries. ''I can't tell you if they're getting any better or not.'' ... Rookie TE Jordan Leggett, who has yet to play this season, did not practice Friday and was ruled out for the game after his right knee swelled after practice on Thursday. Bowles said Leggett will have additional tests done and was unsure how long the fifth-round draft pick out of Clemson could be sidelined.