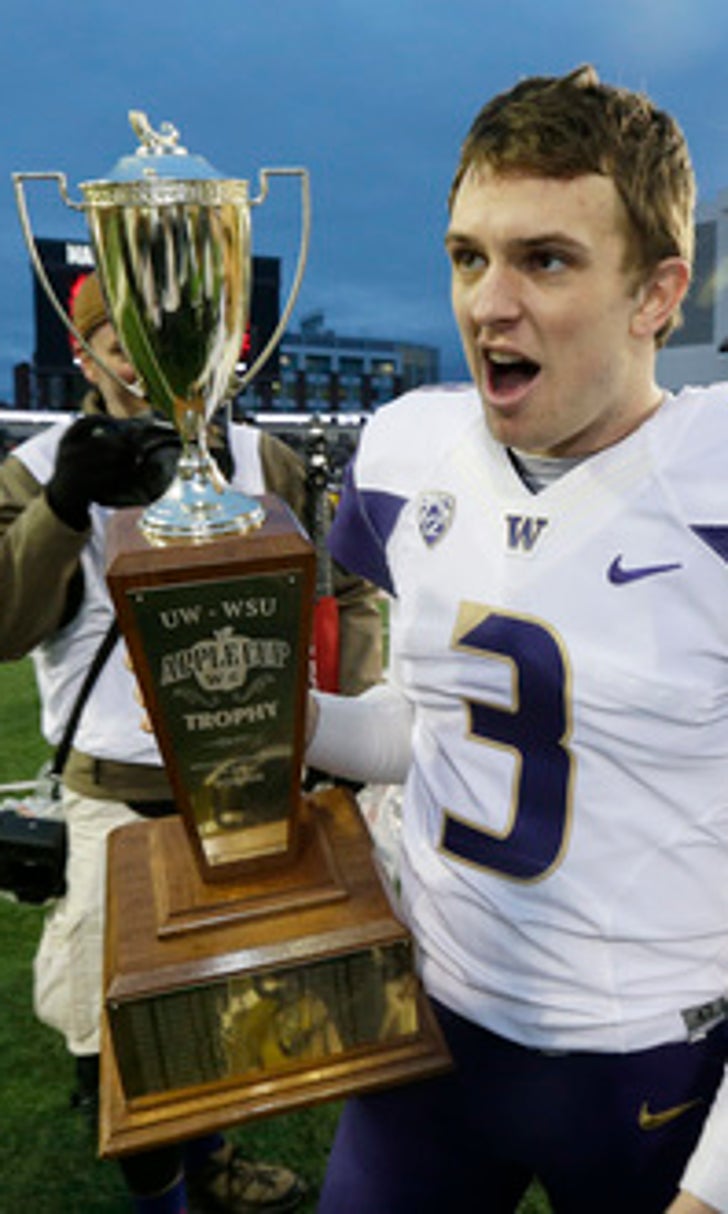 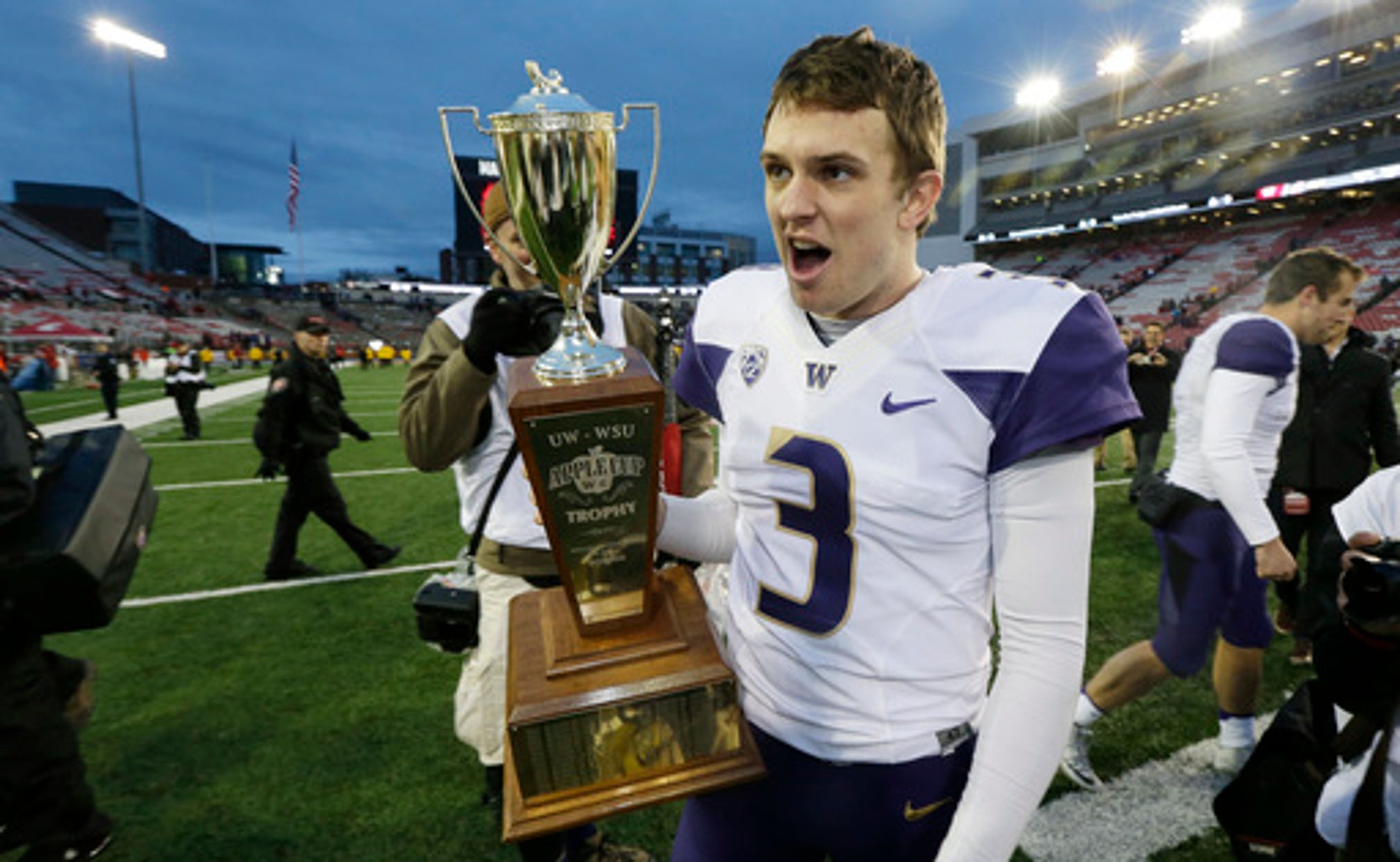 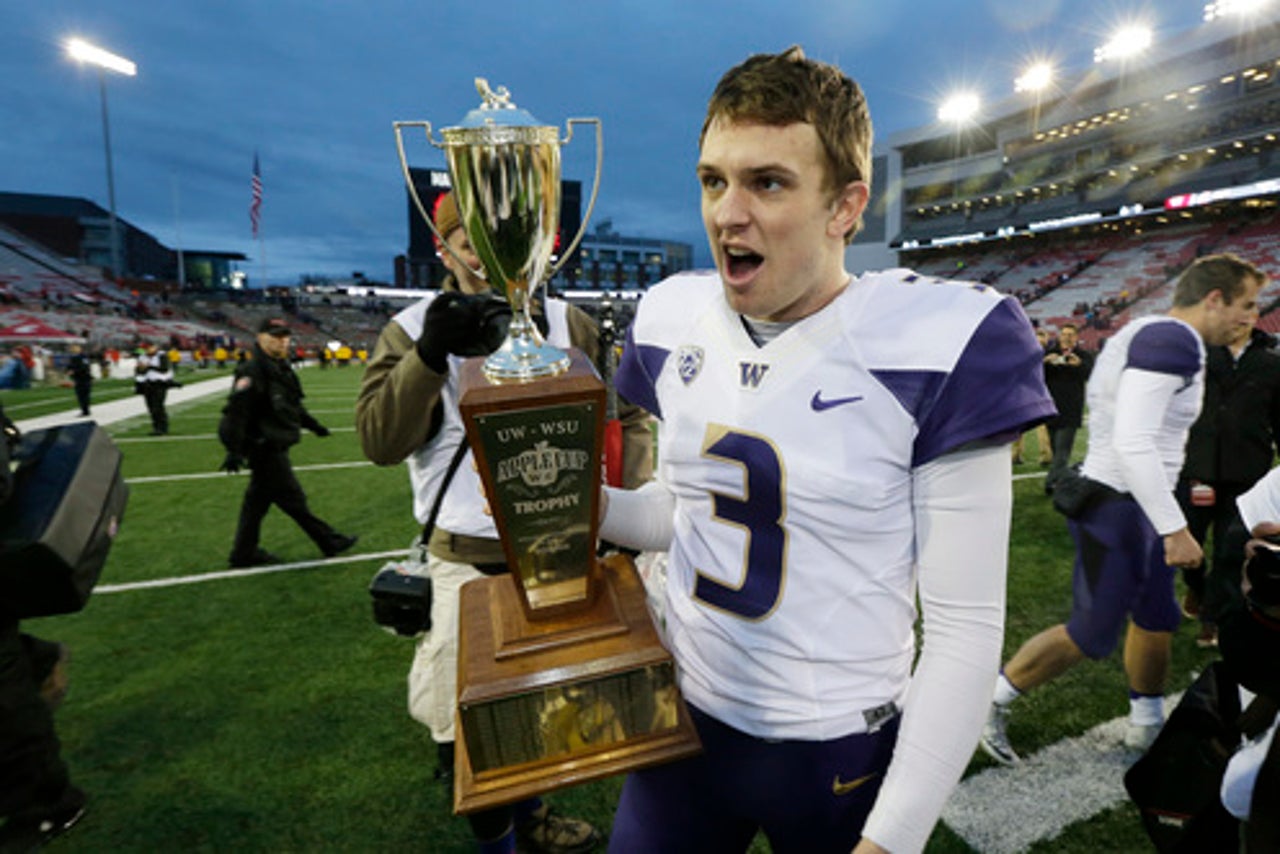 PULLMAN, Wash. (AP) Jake Browning and No. 6 Washington passed its final test of the regular season thanks to one nearly perfect quarter.

Browning threw for 292 yards and three touchdowns and the Huskies used a 28-point first quarter to beat No. 23 Washington State on Friday, claiming the Apple Cup for the fourth straight year and the Pac-12 North title.

Washington will take its College Football Playoff hopes into the Pac-12 championship game next Friday against either Colorado or Southern California.

Browning threw all three touchdown passes in the first 15 minutes, hitting Dante Pettis on plays of 18 and 61 yards and John Ross on a 6-yarder. Browning had 243 yards passing by halftime, the Huskies had 386 total yards at the break and even Washington State's third-quarter rally didn't make Washington sweat.

Browning completed 21 of 29 passes, becoming the third quarterback in Pac-12 history with at least 40 TD passes in a season. Ross had eight catches for 80 yards and his 16th TD catch of the season.

Washington State quarterback Luke Falk was 33 of 50 passing for 269 yards and a 9-yard TD pass to Gabe Marks in the third quarter. But the Cougars were unable to find the end zone on three drives inside the Washington 10.

Eight years after this matchup was mocked because of how bad the two teams were, the Apple Cup was back on a stage of national relevance as the Pac-12 North title game and regarded by many fans as the most important matchup of the 109 meetings.

It became a purple party for the Huskies that made the trip over the Cascade Mountains to the Palouse.

Lavon Coleman added 82 yards rushing and a pair of touchdowns. His 15-yard TD run early in the fourth quarter capped a 98-yard drive and sent many clad in red back to the tailgating lots.

Washington's first half was a picture of dominance, punctuated by big plays that left the Cougars playing chase from the start. Washington rolled up 386 yards in the first half, 252 coming in the first quarter and capitalized on three big mistakes by Washington State.

Jamal Morrow fumbled on Washington State's opening possession, recovered by D.J. Beavers at the Cougars' 46. Eight plays later, Pettis caught an 18-yard touchdown and Washington had a 14-0 lead. Later in the half, Gerard Wicks was stopped at the 1 on fourth-and-goal on a great play by Benning Potoa'e. And on the final drive of the first half, Falk was intercepted by Beavers in the end zone.

Down 35-17, Washington State had a chance to pull within 11 late in the third quarter, but on the 17th play Wicks was again stuffed on fourth-and-goal.

Washington: The big play was a key in Washington's big first half. The Huskies had eight plays of 15 yards or more. That included the 61-yard touchdown to Pettis, the 22-yard touchdown run by Coleman and a mixture of other long plays like Darrell Daniels' 50-yard catch on a double pass from Pettis and Ross' 31-yard run.

Washington: The Huskies will face either Colorado or Southern California in the Pac-12 championship game next Friday.