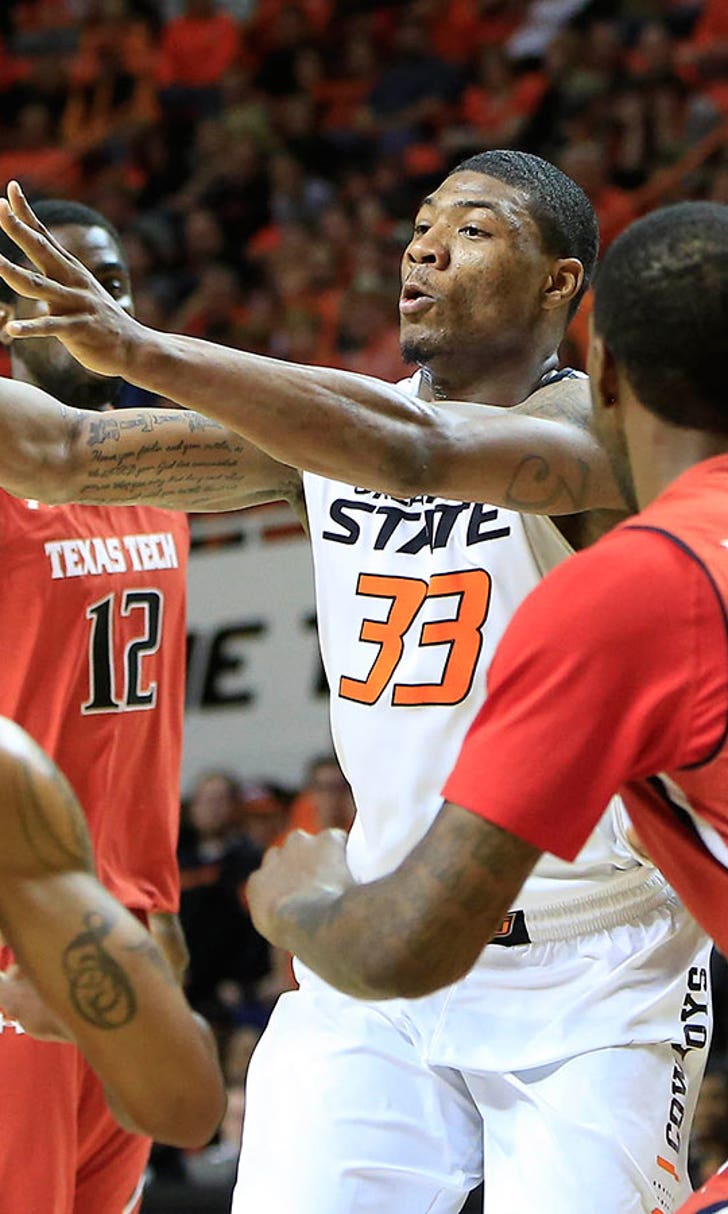 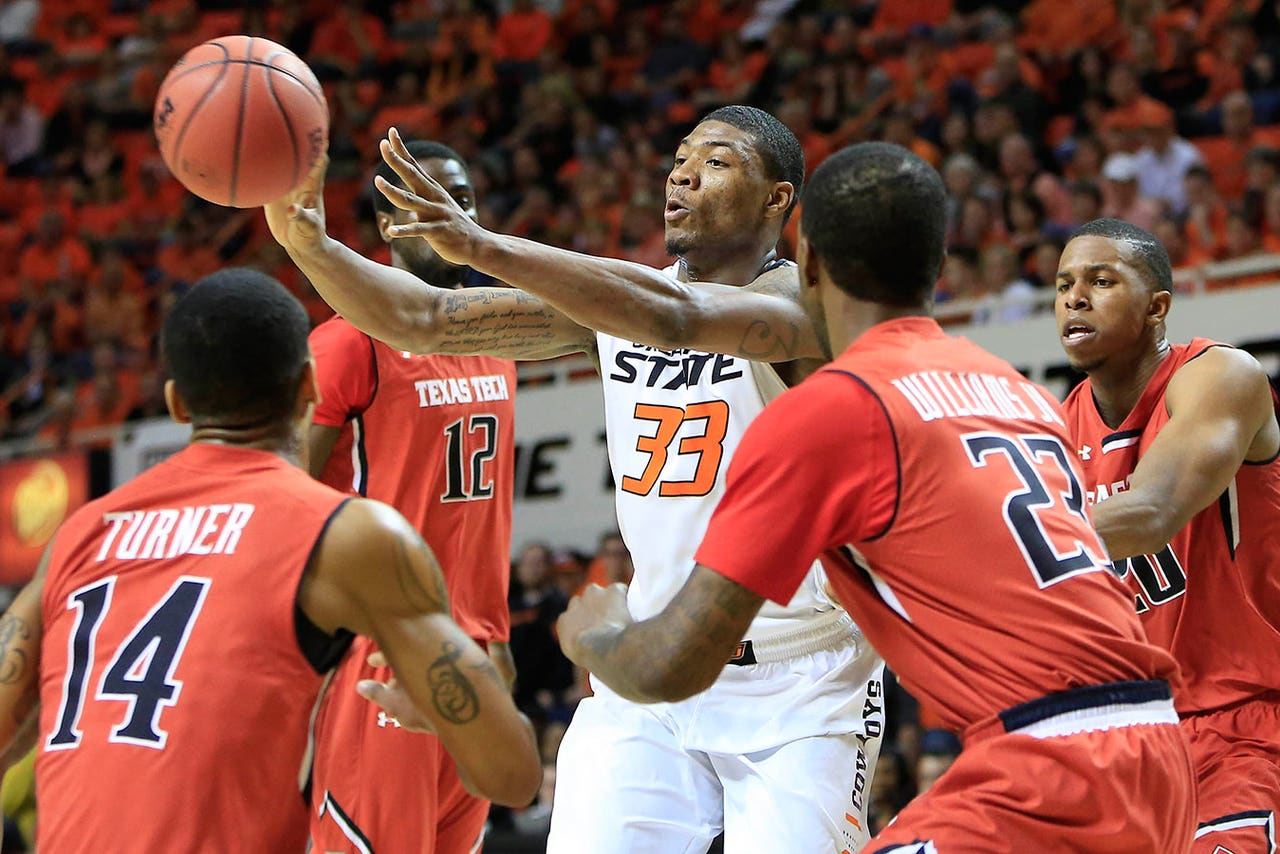 STILLWATER, Okla. -- The angry, out-of-control Marcus Smart the sports world became familiar with over the past few weeks was replaced by a much happier version on Saturday afternoon.

The preseason All-America guard had 16 points, 10 assists and six steals in his return from a three-game suspension for shoving a fan, and Oklahoma State defeated Texas Tech 84-62 on Saturday afternoon to snap a seven-game losing streak.

Smart said it felt like months or years of not being able to play with his team. With a win, finally, the emotional pain from letting his teammates down and the burden of the losing streak were lifted.

"It was just fun, for the first time in a long time," he said.

Smart had been out of action since his incident with Tech fan Jeff Orr in the final seconds of Tech's 65-61 win in Lubbock on Feb. 8. The Cowboys lost all three games Smart missed, but on Saturday he sparked his team in the rematch with the Red Raiders by setting a career high for assists.

"I think Marcus was the difference," Le'Bryan Nash, who led the Cowboys with 21 points, said. "Getting our point guard back, our leader of our team -- it was exciting. That's what helped us win. That's what we need."

Smart said OSU's effort was commendable while he was out, but the need for better teamwork became obvious during his time as a spectator.

"I watched it," he said. "I get to see what the coaches see. It helped me a lot because you could see that we had a lot of guys that were open and we just weren't making the extra pass quick enough. That's what we've been working on in practice the last couple of days."

Phil Forte regained his shooting stroke and scored 20 points for the Cowboys (17-10, 5-9 Big 12). Forte became a starter while Smart was out, and he remained a starter on Saturday. He made 4 of 8 3-pointers and played 37 minutes.

Smart liked the insertion of Forte, his high school teammate, in the starting lineup. It was just the second time the two sophomores have started together at Oklahoma State. They helped Oklahoma State shoot 57 percent from the field.

The Red Raiders had won three of five, with the two losses to Top 25 teams Iowa State and Kansas coming by a combined seven points. Jordan Tolbert had 15 points and 10 rebounds and Robert Turner added 10 points for Texas Tech (13-14, 5-9), which shot well but committed 15 turnovers.

"Well, that was a disappointing performance on our part," Texas Tech coach Tubby Smith said. "We'd been playing OK, but today, we took a step backward as far as with execution and turnovers."

Oklahoma State honored the late Bob Kurland at halftime. The 7-foot center was a three-time first-team All-American and led OSU to its only two national championships.

The Cowboys also honored Kurland with their play.

The teams were relatively even through most of the first half until Oklahoma State got into a rhythm. It started with a defensive play. Brown tipped the ball to Smart, who passed the ball behind his head back to Brown, who finished with a layup. A steal and layup by Smart and 3-pointers by Forte and Brown helped Oklahoma State take a 24-14 lead and caused Texas Tech to call a timeout.

The Red Raiders closed the gap to 30-25 before Smart finished the half with a flurry. He drove to the hoop and made a layup in traffic with 8 seconds left in the half, then stole the ball and scored again a second later to help the Cowboys take a 34-25 lead at the break.

"Whenever you have a player of Marcus Smart's caliber, it takes you to another level," Smith said.

Turner, Tech's point guard, played just 4 minutes in the first half because of foul trouble. The Red Raiders' offense improved once he returned to the game, but the Cowboys responded to Tech's surge. Dunks by Nash and Kamari Murphy put Oklahoma State up 44-35.

Later, Smart got a steal, then the Cowboys pushed the ball downcourt and Smart found Brown for a layup. On Oklahoma State's next possession, Leyton Hammonds' 3-pointer bumped the Cowboys' lead to 59-42.

A jam by Smart gave Oklahoma State and 80-60 lead with just over 2 minutes to play. He received a standing ovation when he left the game with just over a minute remaining.

Smart's favorite statistic was his assist total. He had eight in the second half to help the Cowboys shoot 66 percent after the break.

"That was my focus coming back -- trying to find these guys because they work hard on the defensive end, so I try to reward them on the offensive end," he said. "These guys made the shots and they were in the right places."