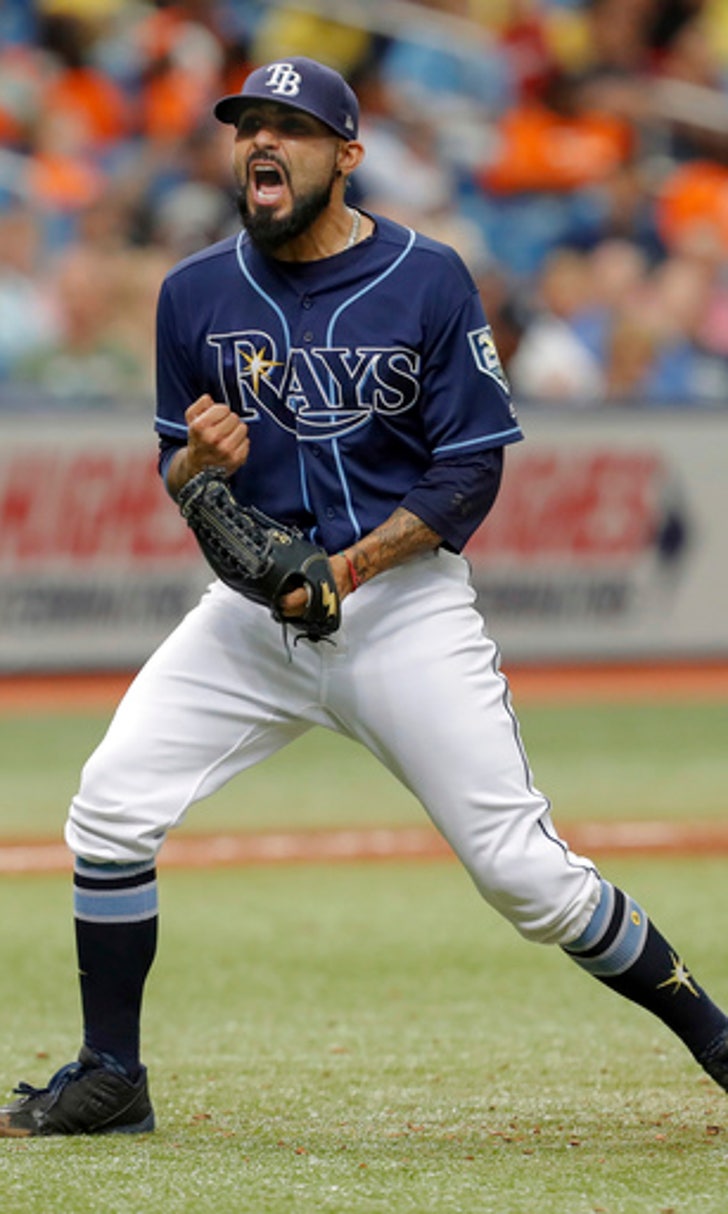 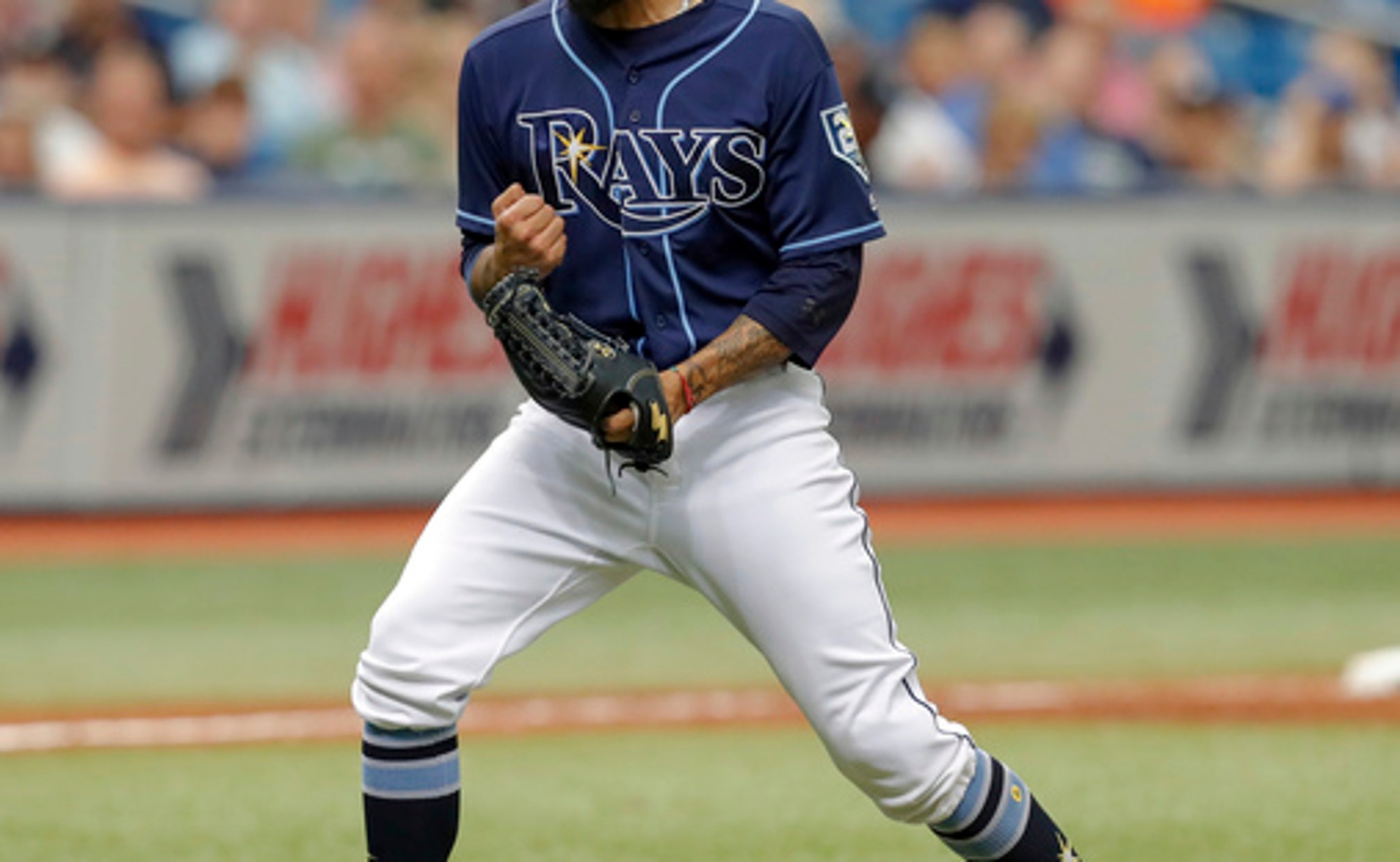 ST. PETERSBURG, Fla. (AP) Sergio Romo relieved in the eighth inning, shifted to third base when Jonny Venters replaced him in the ninth, then struck out Brett Gardner to end the game with two on and give the Tampa Bay Rays a 3-2 win over the New York Yankees on Wednesday.

New York has lost just two series since May, and both are against the Rays. Tampa Bay swept three games in late June, took two of three this week and has won six of its past seven against the Yankees. New York, 14-14 over its past 28 games, acquired reliever Zach Britton from Baltimore late Tuesday but said he will not report until Thursday's homestand opener against Kansas City.

Neil Walker hit a sacrifice fly in the second inning, but the Rays took a 3-1 lead in the sixth when Kevin Kiermaier hit a two-run homer off Luis Cessa (1-2) and C.J. Cron added a solo drive against Jonathan Holder.

CLEVELAND (AP) - Trevor Bauer struck out 10 over seven innings, Brad Hand got his first save for Cleveland and the Indians stopped Pittsburgh's winning streak at 11.

Pittsburgh was seeking its first 12-game winning streak since 1965 but only advanced one runner past second base as Bauer, Adam Cimber and Hand combined for a three-hitter.

Bauer (9-6) allowed Adam Frazier's leadoff double in the fourth and Jordy Mercer's leadoff single in the eighth. He reached double figures in strikeouts for the ninth time this year and walked two, improving to 3-0 with an MLB-low 0.33 ERA in four interleague starts this season.

Jameson Taillon (7-8) gave up two runs and seven hits over seven innings in his first start against the Indians.

Tyler Skaggs (8-6) tied a career high with nine strikeouts in six overpowering innings. He whiffed his first five batters - the previous Angels pitcher to accomplish that was Jim Abbott at Oakland in September 1995.

Trout had his 13th career multihomer game. He hit a solo shot in the first inning and a three-run drive in the sixth to give him 28 homers this season. The two-time MVP went 3 for 4 and scored three runs.

Skaggs retired the first 10 batters he faced, seven by strikeout. He allowed two runs, one earned, and four hits.

Rhys Hoskins also went deep for the Phillies, who increased their lead in the NL East to 1 games over the idle Atlanta Braves.

The game started less than 11 hours after the final out of the Phillies' 7-4, 16-inning win that started Tuesday night and lasted 5 hours, 55 minutes, ending at 1:14 a.m. Wednesday.

Seranthony Dominguez recorded the final four outs for his 10th save in 11 chances.

Roark (4-12), the NL leader in losses, allowed three hits, struck out a season-high 11 and walked one, helping the Nationals avoided being swept in the three-game series. He had been 0-6 in seven starts since beating Tampa Bay on June 6.

CHICAGO (AP) - Jon Lester bounced back from his worst start of the season with six strong innings and the Cubs scored the go-ahead run in the eighth on Arizona shortstop Nick Ahmed's throwing error and Chicago edged Arizona.

Chicago mounted the winning rally against Arizona reliever T.J. McFarland (2-2) without getting a ball out of the infield. Pinch-hitter Javier Baez led off the eighth by squibbing a single toward the mound. McFarland threw wide of first, and Baez advanced to second.

After pitcher Tyler Chatwood ran for Baez, who didn't start because of a sore left knee, and Ian Happ walked, pinch-hitter Jason Heyward bounced to second baseman Ketel Marte. Marte flipped to Ahmed for a force at second, but Ahmed's throw to first sailed over Paul Goldschmidt as he tried to complete a double play.

Reliever Carl Edwards Jr. (3-1) pitched a hitless seventh and eighth. Pedro Strop tossed a scoreless ninth for his fourth save in seven chances as NL Central leading Chicago bounced back after losses to Arizona in the first two games of the four-game series.

DENVER (AP) - Charlie Blackmon hit a solo home run with one out in the bottom of the ninth inning and Colorado held the World Series champions to one hit at Coors Field.

Blackmon drove a 3-1 pitch from Collin McHugh (5-1) into the Houston bullpen for his 20th home run of the season and second career game-ending hit. It was a dramatic finish to a wild game in which the Astros had a triple wiped out after a replay review because of fan interference, and the Rockies scored the tying run on a foul popup.

AL MVP Jose Altuve ended up with Houston's only hit - an RBI double - before leaving with discomfort in his right knee.

Wade Davis (1-3) worked a scoreless inning for the win.

Davis hit a three-run drive in the seventh to get the Athletics to 5-4. He went the opposite way in the ninth off Jose Leclerc (2-3) for his 27th homer of the season.

Davis has gone deep in six consecutive games against Texas. He has 25 homers and 57 RBIs in 49 career games versus the Rangers - 15 homers and 31 RBIs in 26 road games.

The Rangers led 5-1 going into the seventh, one night after being ahead 10-2 in the seventh and losing 13-10 when Davis hit a three-run homer in the 10th.

Lou Trivino (8-1) worked a scoreless eighth. Blake Treinen struck out the side in the ninth for his 26th save.

Robinson Chirinos hit a three-run homer for Texas, and Adrian Beltre passed Dave Winfield for 16th on the career total bases list with an RBI single.

SEATTLE (AP) - Jean Segura chopped the first pitch from Sam Dyson into center field to score Guillermo Heredia with the go-ahead run in the eighth inning, and Seattle Mariners won yet another one-run game by beating San Francisco.

Seattle came up with just enough offense to split the two-game interleague series, and it was one of their All-Stars who came through. Heredia walked to lead off the eighth inning against Tony Watson (3-4) and advanced to second on Dee Gordon's bunt. Gordon was initially called safe but was out on review.

Dyson, who shut down the Mariners a night earlier, took over and was greeted by Segura's chopper up the middle, and Heredia beat the throw home from Steven Duggar.

Alex Colome (3-5) pitched the eighth inning, and Edwin Diaz struck out the side in the ninth for his league-best 38th save in 41 chances. Seattle improved to 27-12 in one-run games this season.

Adam Duvall also homered for the Reds. Sal Romano (6-8) allowed two runs and seven hits in six innings to give the Reds consecutive series wins over St. Louis for the first time since 2011.

Paul DeJong and Yadier Molina hit solo homers for the Cardinals, who went 3-5 on their eight-game road trip. DeJong homered in the third inning and Molina hit his 14th of the season in the seventh inning.

KANSAS CITY, Mo. (AP) - Mike Moustakas had two hits, including a run-scoring double, in what might have been his final home game for Kansas City.

A key member of the Royals' 2015 World Series championship team, Moustakas became a free agent after last season, then signed a one-year contract with the Royals in March that includes a mutual option for 2019. With the Royals last in the AL Central at 31-70, he could be dealt before Tuesday's deadline for trades without waivers.

Jose Iglesias hit a three-run homer in a four-run fourth inning against Danny Duffy (6-9). Victor Martinez had three hits, including a pair of RBI singles.

TORONTO (AP) - Max Kepler drove in the tiebreaking run when he was hit by a pitch with the bases loaded in a six-run 11th inning, and Minnesota completed its first sweep at Toronto in more than 15 years.

Mitch Garver went 4 for 6 with a homer and five RBIs and Joe Mauer had three hits and three RBIs as Minnesota swept a three-game series north of the border for the first time since April 11-13, 2003.

Toronto manager John Gibbons was ejected for arguing with plate umpire Sean Barber after right-hander Jake Petricka (1-1) hit Kepler with a 1-2 pitch that forced home Brian Dozier from third base.

Matt Belisle (1-0) pitched two innings as the Twins won their third straight, bouncing back after being swept at Kansas City over the weekend in their first series following the All-Star break.

A 24-year-old right-hander who made his big league debut in April, Oswalt took the mound hours after the Mets announced slugging outfielder Yoenis Cespedes will have operations to remove calcifications in both of his heels, surgeries that are expected to have a recovery time of at least 8-to-10 months.

Oswalt (1-2) made his fifth big league start and sixth appearance. He allowed two runs and two walks while striking out four, leaving after 62 pitches.

Tim Peterson got four outs, Robert Gsellman finished the seventh and Anthony Swarzak pitched two innings for his fourth big league save, his second this year.