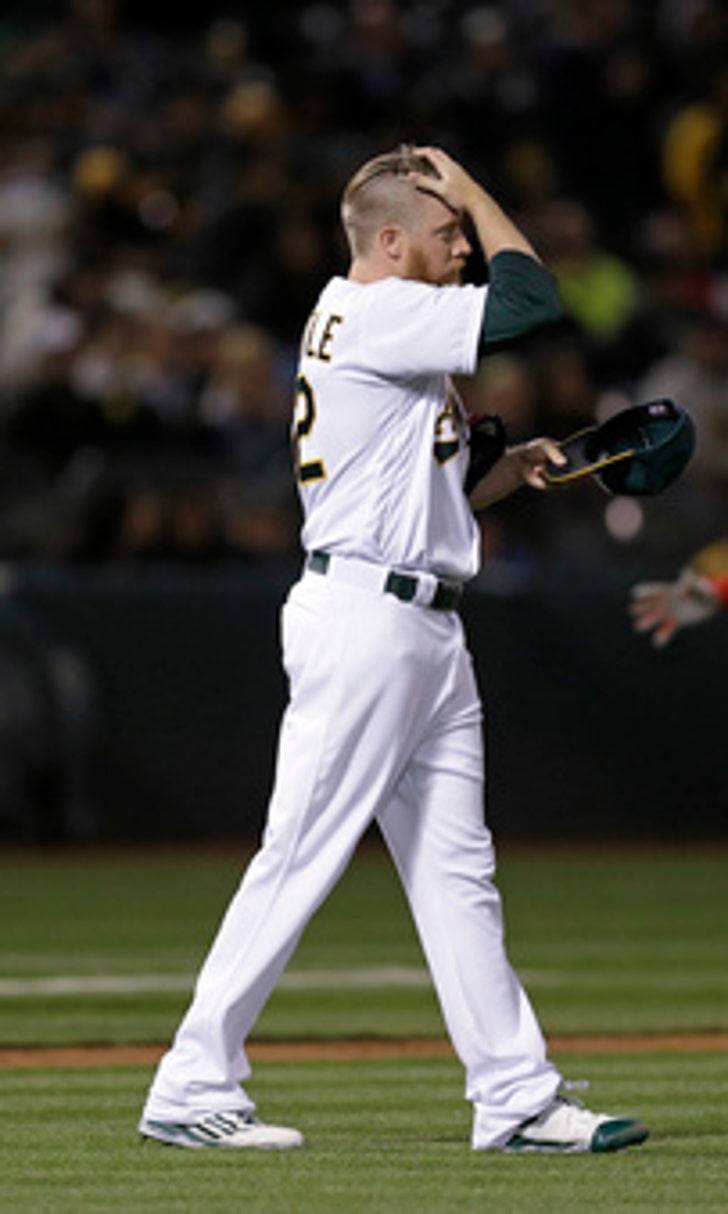 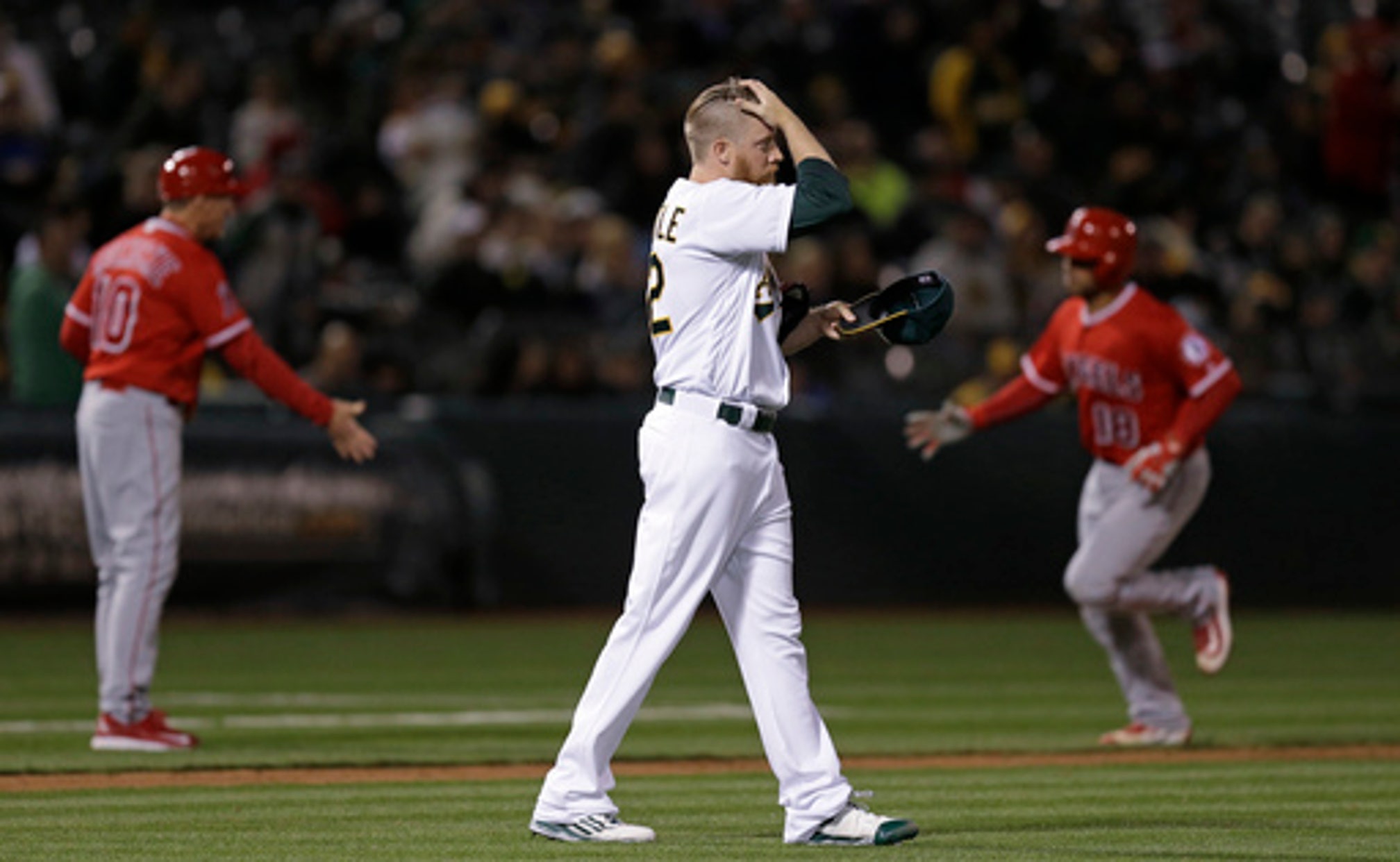 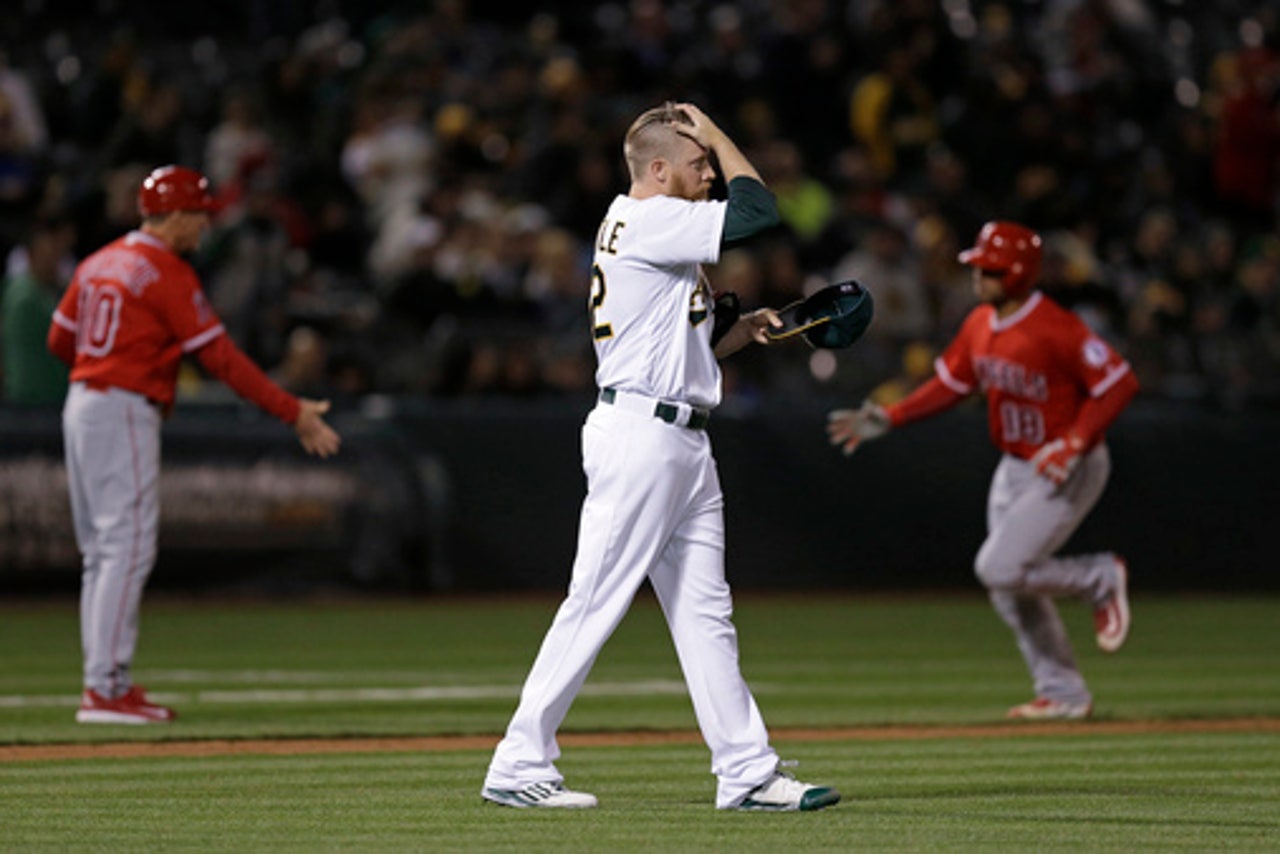 OAKLAND, Calif. (AP) Geovany Soto hit a go-ahead two-run homer with one out in the ninth, and the Los Angeles Angels rallied against Oakland closer Sean Doolittle to beat the Athletics 5-4 on Tuesday night.

Albert Pujols hit a two-run double in the eighth off Ryan Madson to get the Angels back in the game.

Marcus Semien homered twice and Josh Reddick drove in two runs for the A's, who will try to avoid a sweep Wednesday afternoon.

Pujols and Mike Trout, along with reliever Joe Smith and infielder Cliff Pennington, spent the morning at Golden State Warriors practice and shooting around with the defending NBA champions. Trout even beat Draymond Green at PIG before going 0 for 4 with a strikeout in his game that mattered.

Doolittle (1-2) and Madson couldn't get it done after Kendall Graveman's strong start and Oakland lost its third one-run game while playing its sixth such contest.

Mike Morin retired one batter in the eighth for the win before Huston Street finished for his third save in as many days.

Semien homered in the third and again in the seventh. It was his second career two-homer game and first since May 10 last year at Seattle.

A's designated hitter Billy Butler was back in the starting lineup for the first time in six games after sitting the past five against right-handed starters. He went 0 for 4 with a strikeout and grounded into a double play.

Pennington, who entered to run for Pujols in the eighth and stayed in the game, played first base for the first time in his nine-year career.

Graveman allowed one run on four hits with three strikeouts and two walks over six innings. He held Trout and Pujols hitless in their initial five at-bats with a strikeout and walk to cleanup hitter Pujols.

Smith did the unthinkable earlier in the day: He topped reigning NBA MVP Stephen Curry in a game of PIG.

The reliever made a blind, backward, over-the-head free throw that Stephen Curry couldn't match. Then, the Angels pitcher stymied Curry on a left-handed 3-pointer and had suddenly beaten arguably the world's best basketball player at a good-natured game of PIG.

At the ballpark, Smith was still riding high from his improbable feat.

Angels: LHP Tyler Skaggs, working back from reconstructive elbow surgery, will pitch four innings for Triple-A Salt Lake at Sacramento on Friday, then will have two five-inning outings. ... Struggling 1B C.J. Cron had most of the day off to ''exhale'' as manager Mike Scioscia put it.

Athletics: LHP Felix Doubront underwent Tommy John surgery to repair a torn elbow ligament using a hamstring graft in this case. The surgery was performed by Dr. Timothy Kremchek in Cincinnati. A's athletic trainer Nick Paparesta said a small bone also was removed from the elbow area. ... RHP Henderson Alvarez (right shoulder surgery) felt good facing hitters Monday and the A's were planning a simulated game as his next step. ... INF Eric Sogard (strained neck) was in Oakland to work out and scheduled to play nine innings at SS for Class A Stockton on Wednesday night.

Angels: RHP Matt Shoemaker (0-1, 18.00 ERA) looks to bounce back from his first outing last Friday against Texas during which he surrendered six earned runs in three innings.

Athletics: LHP Eric Surkamp (0-0, 4.15 ERA) faces the Angels for the first time in his career making his second start after being recalled from Triple-A Nashville last Friday to make his Oakland debut that night in Seattle.

The Battle For Titletown USA
Both have won titles already this year. Now, L.A. and Tampa Bay vie for ownership of the sports world, Martin Rogers writes.
43 mins ago