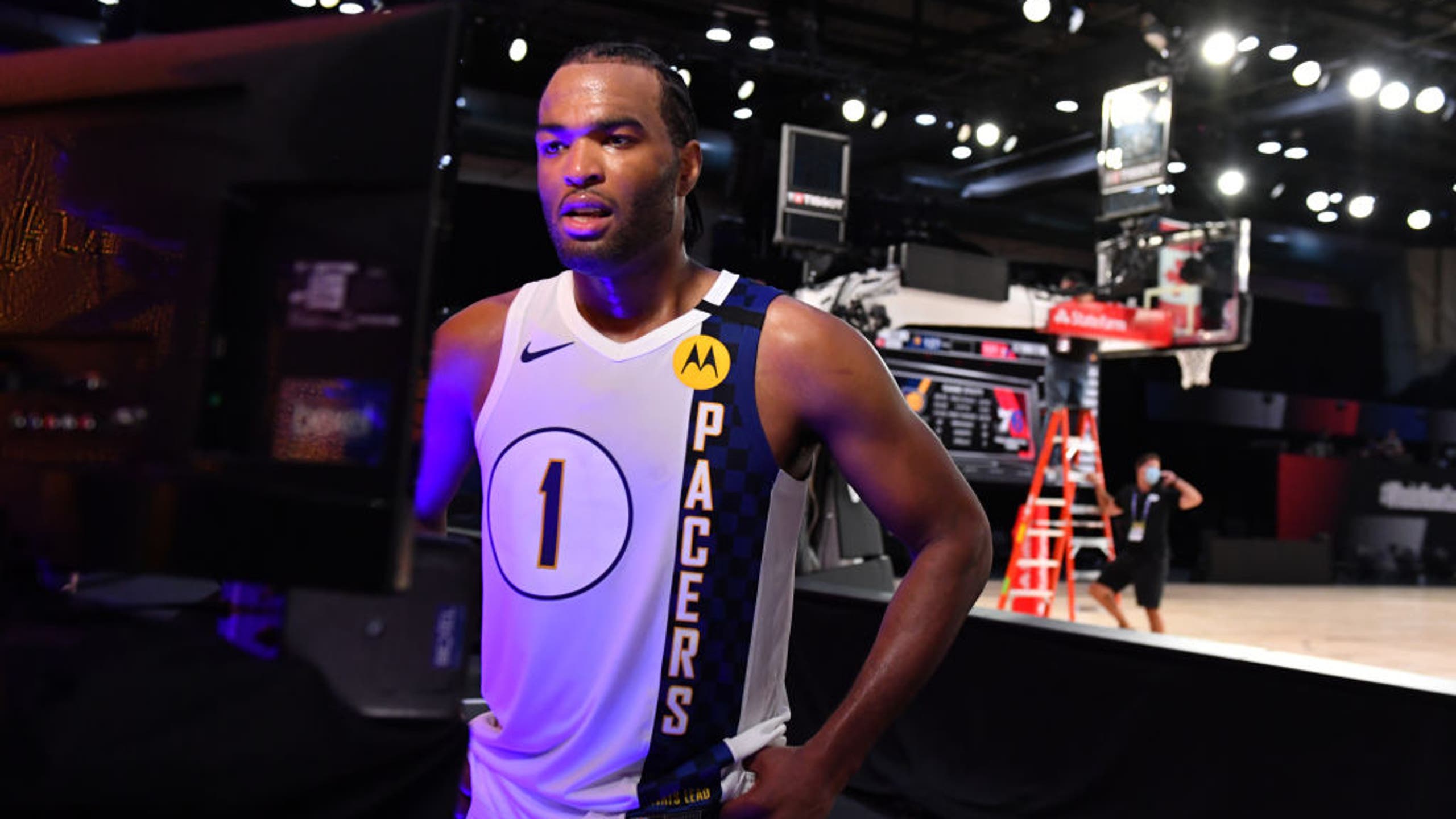 Day 3 in the NBA bubble featured five games, highlighted by the Toronto Raptors' 107-92 win over the Los Angeles Lakers.

In the other four games, the Los Angeles Clippers dominated the New Orleans Pelicans en route to a 126-103 victory, the Indiana Pacers knocked off the Philadelphia 76ers, 127-121, Oklahoma City defeated the Utah Jazz, 110-94, and the Miami Heat rolled over the Denver Nuggets, 125-105.

Here are the Top 6 things you need to know from Saturday in the NBA:

Move over, Skinny Melo – the NBA bubble has a new breakout star.

Six-year NBA veteran T.J. Warren went off on the Sixers on Saturday, scoring a career-high 53 points. He shot 9-for-12 from three and made 20 of 29 shots on the day.

He became the first Pacer to score 50 or more since Jermaine O'Neal in 2005.

2. Paul George is on fire

In the Clippers' first two games in the bubble, Paul George has carried the offensive load, scoring a combined 58 points.

But it's less about the points and more about the way he's getting them.

George scored 30 points in Thursday's loss to the Lakers, connecting on 6 of 11 threes. Then, in Saturday's blowout win over the Pelicans, PG-13 did not score a 2-point field goal, hitting 8 of 11 threes and going 4-for-5 from the free throw line in 26 minutes.

3. The Zion minutes-limit is real

Two days after the basketball world went crazy after Zion Williamson only played 15 minutes in the Pelicans' bubble opener, he played just 14 minutes in New Orleans' blowout loss to the Clippers on Saturday.

Zion recorded 13 points and 1 assist in just over 15 minutes in Thursday's 103-101 loss to the Utah Jazz, and Saturday afternoon, the rookie sensation scored 7 points and grabbed 5 rebounds in just 14 minutes.

4. Chris Paul has still got it

Future Hall of Famer Chris Paul posted a modest stat-line on Saturday – 18 points, 7 assists and 7 rebounds – but his presence on the court remains vital for the Thunder.

Oklahoma City never trailed on Saturday, and now trail Utah by only a half game for the 4th spot in the Western Conference standings.

A potentially ugly scene nearly unfolded during a timeout in the first quarter of the Sixers-Pacers matchup, when Philadelphia superstar center Joel Embiid appeared to accost teammate Shake Milton near the Sixers' bench.

Apparently, Embiid was upset with consecutive possessions orchestrated by Milton that led to either a Philadelphia turnover or Pacers bucket.

However, if there is a silver lining for the Sixers, maybe it's that an upset Embiid is a dominant Embiid.

Embiid addressed the altercation after the game.

6. Raptors continue their domination over the Lakers

The Lakers superstar duo of Anthony Davis and LeBron James tallied 34 points, 16 rebounds and 8 assists between the two of them.

Toronto extended its double-digit winning streak over the Purple and Gold.

Win $25,000 With NBA Super 6
The NBA features some juicy games ahead of the All-Star break. Here's how you can win some money on the marquee matchups.
2 hours ago

At His Bearded Best
In the midst of the Brooklyn experiment, one of the Nets' "Big 3" is remarkably making a case for the league's highest honor.
4 hours ago

Ball in the Family
The Ball brothers are taking the NBA by storm this season, with each reaching a new level of success in the month of February.
6 hours ago

Bird is the Word
Mavericks star Luka Doncic continues to draw comparisons to some of the league's greatest. Just how brightly will this star shine?
21 hours ago

NBA MVP Watch: LeBron Leads The Pack
As the NBA season reaches its midway point, is the MVP award LeBron James' to lose? Here's the latest on the contenders.
1 day ago
those were the latest stories
Want to see more?
View All Stories
Fox Sports™ and © 2021 Fox Media LLC and Fox Sports Interactive Media, LLC. All rights reserved. Use of this website (including any and all parts and components) constitutes your acceptance of these Terms of Use and Updated Privacy Policy. Advertising Choices. Do Not Sell my Personal Info