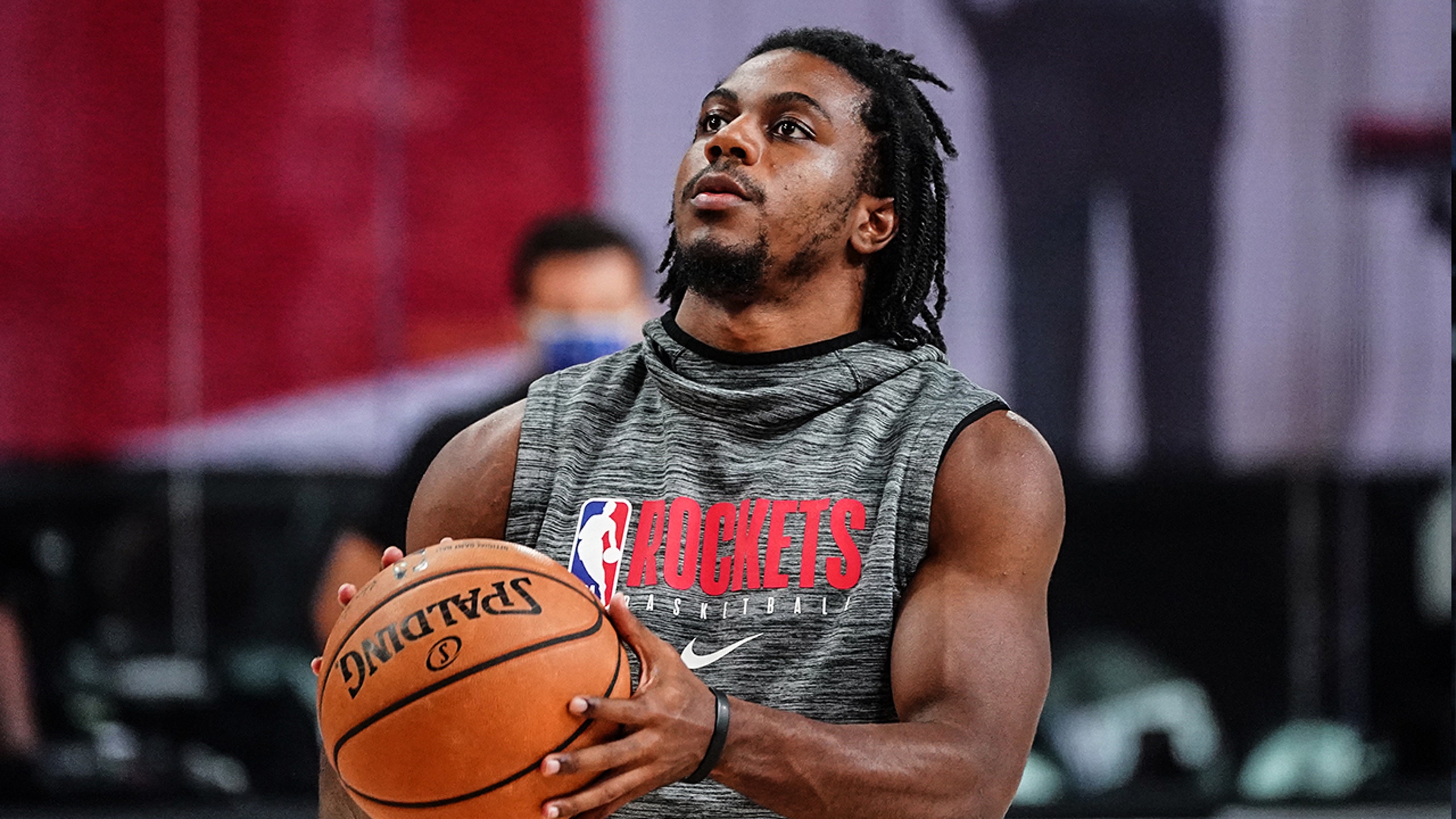 Chris Clemons sat in a wheelchair with his hands on top of his head.

A lot was racing through his mind.

Moments earlier, in the Rockets' third preseason game, Clemons felt a sharp pain after backpedaling down the court after making a 3-pointer. He grabbed his right heel, hopped on his left foot and couldn't take another step.

But the physical pain paled in comparison to his emotional anguish. 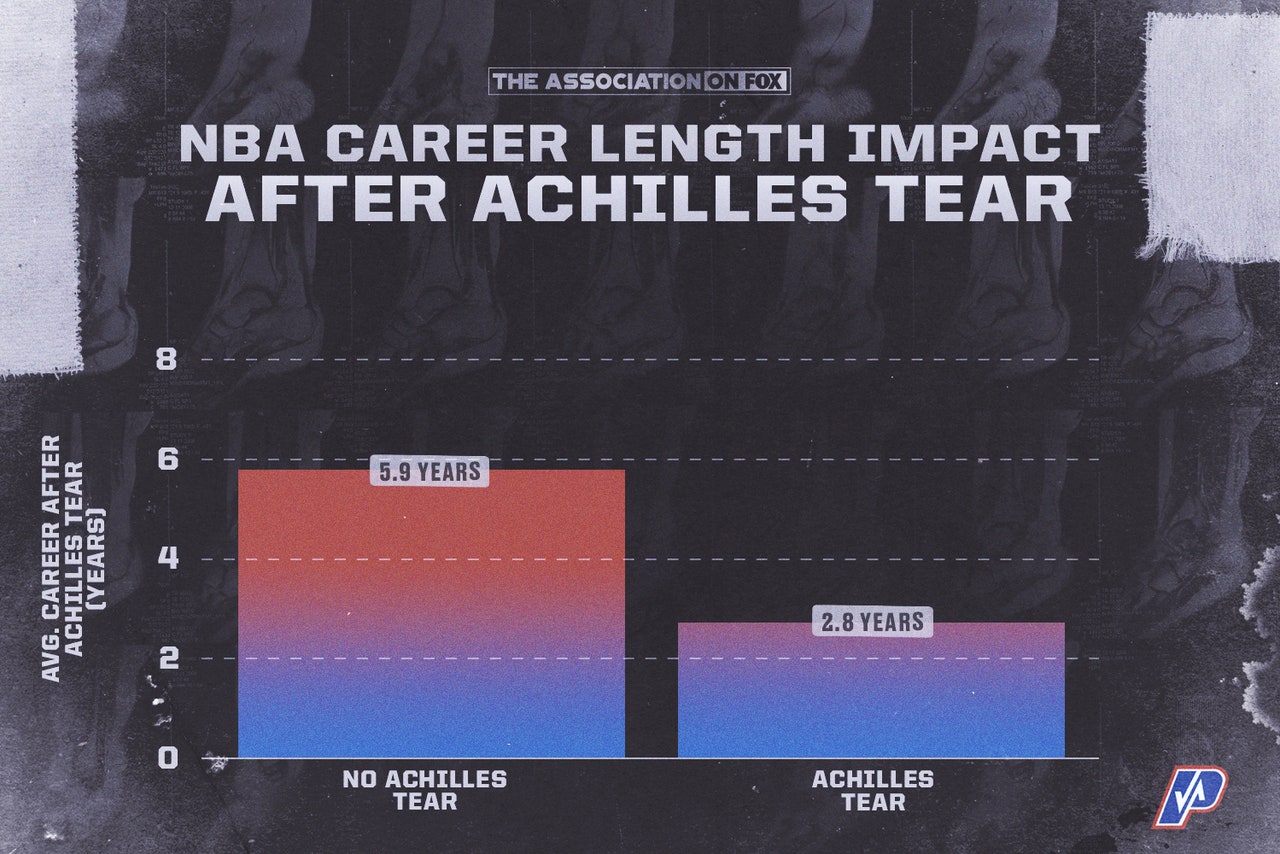 It's one of the most dreaded injuries in the NBA. It keeps players off the court for eight to 12 months, and many never regain the speed, agility and explosiveness they had before suffering it.

And the injury is only becoming more common.

Dr. Matt Provencher, FOX Sports' injury expert and the former team physician for the New England Patriots, said there has been a 5 to 8 percent increase in Achilles tears among NBA players the past two years, according to 15 years of data that his company, Proven Performance Technology, has analyzed.

"There's certainly a slightly higher incidence of it," Provencher said. "It's hard to say why."

Clemons is the fourth player on the Rockets who has suffered the injury in the past four years, along with DeMarcus Cousins, John Wall and David Nwaba.

According to Cousins, something needs to be done. 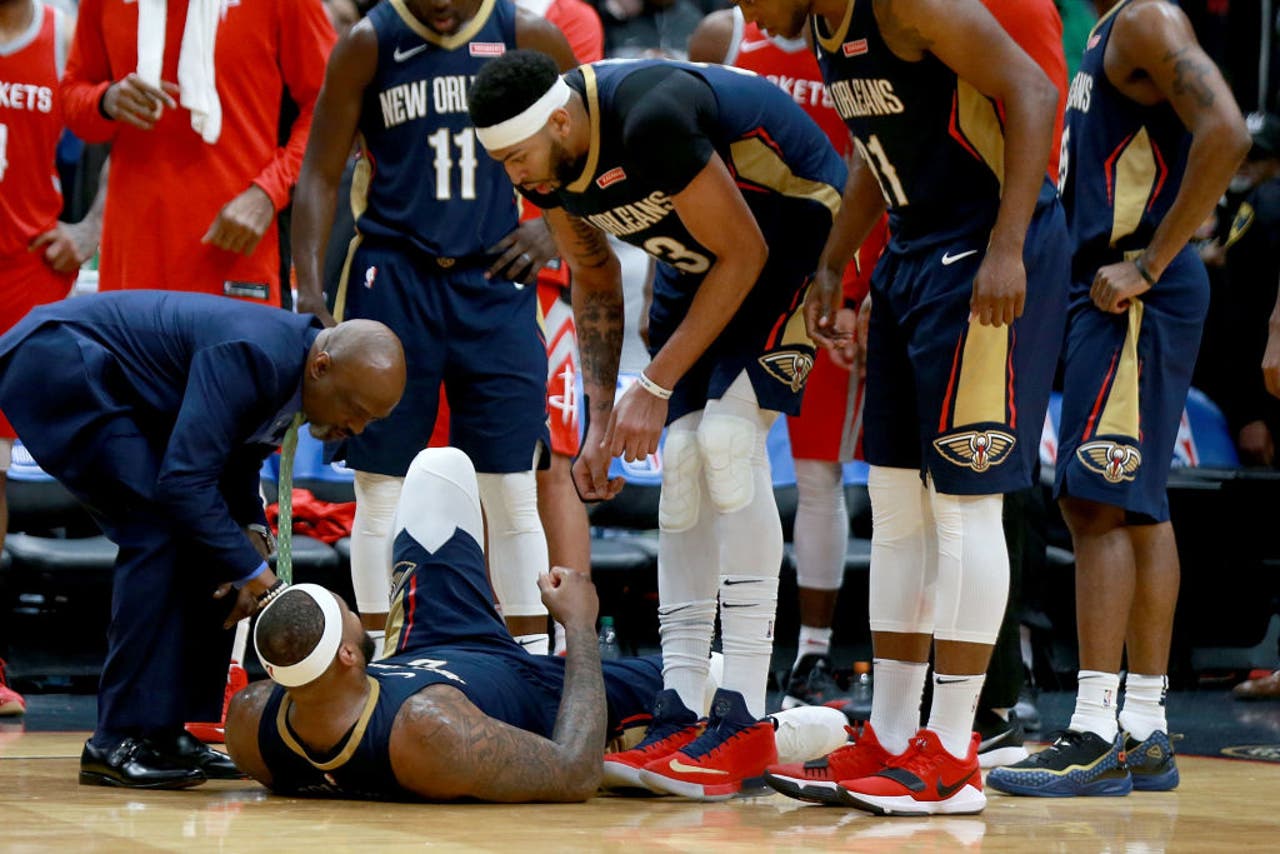 "I kind of feel like I was at the beginning of this so-called Achilles scare or wave that's been going on," said Cousins, who sustained a torn left Achilles in January 2018 while playing for the New Orleans Pelicans. "It's obviously been something that's been increasing, the injury. So that being said, hopefully we can figure out ways besides the ways we have already with injury prevention. There's got to be something to it as to why it's happening so much more now."

The Achilles tendon connects the calf muscle to the heel bone. It's the largest tendon in the body, and its strength is essential for walking, jumping and running. But it can be vulnerable to injury because of its high use and limited blood supply.

If it tears, it can be devastating to an athlete's career.

According to a study published in November in the Orthopedic Journal of Sports Medicine that looked at 47 NBA athletes who suffered Achilles ruptures from 1970 to 2019, those who returned had shorter careers and "decreased game utilization and performance at all-time points relative to their individual preindex baseline." 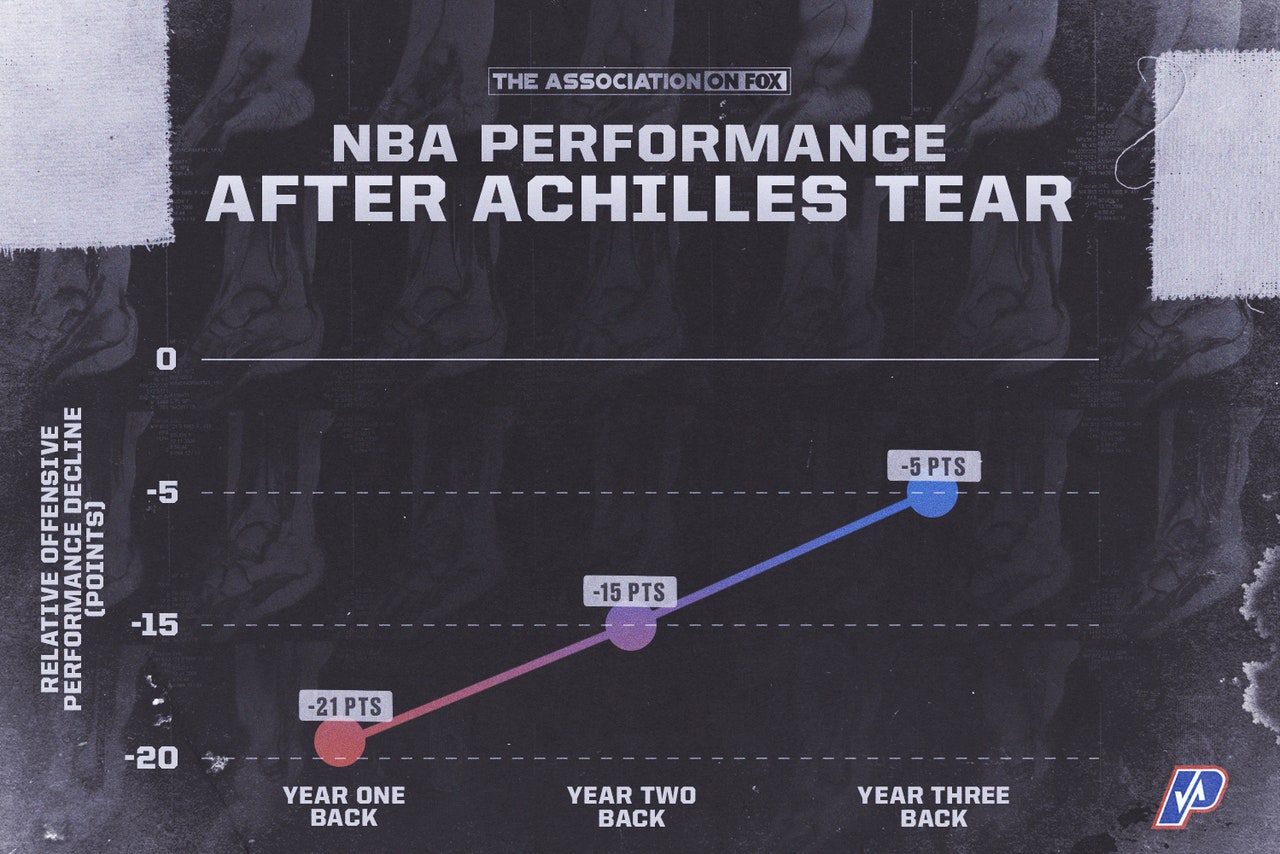 Provencher said that according to his company's data and peer-reviewed articles, athletes typically experience a 20 to 40 percent decrease in productivity in their first season back after an Achilles tear and, overall, athletes return to 80 to 85 percent of their preinjury level.

Provencher hopes the NBA will dedicate more resources to studying Achilles injuries, similarly to how the NFL recently funded a program to study hamstring injury prevention.

"It would be nice to identify those who may be prone to this injury," he said. "Try to figure this out better and to dedicate additional medical research and science to this and putting high-end imaging, such as MRI or other prophylactic measures, to be able to help identify the potential for this injury before it happens. That's the key." 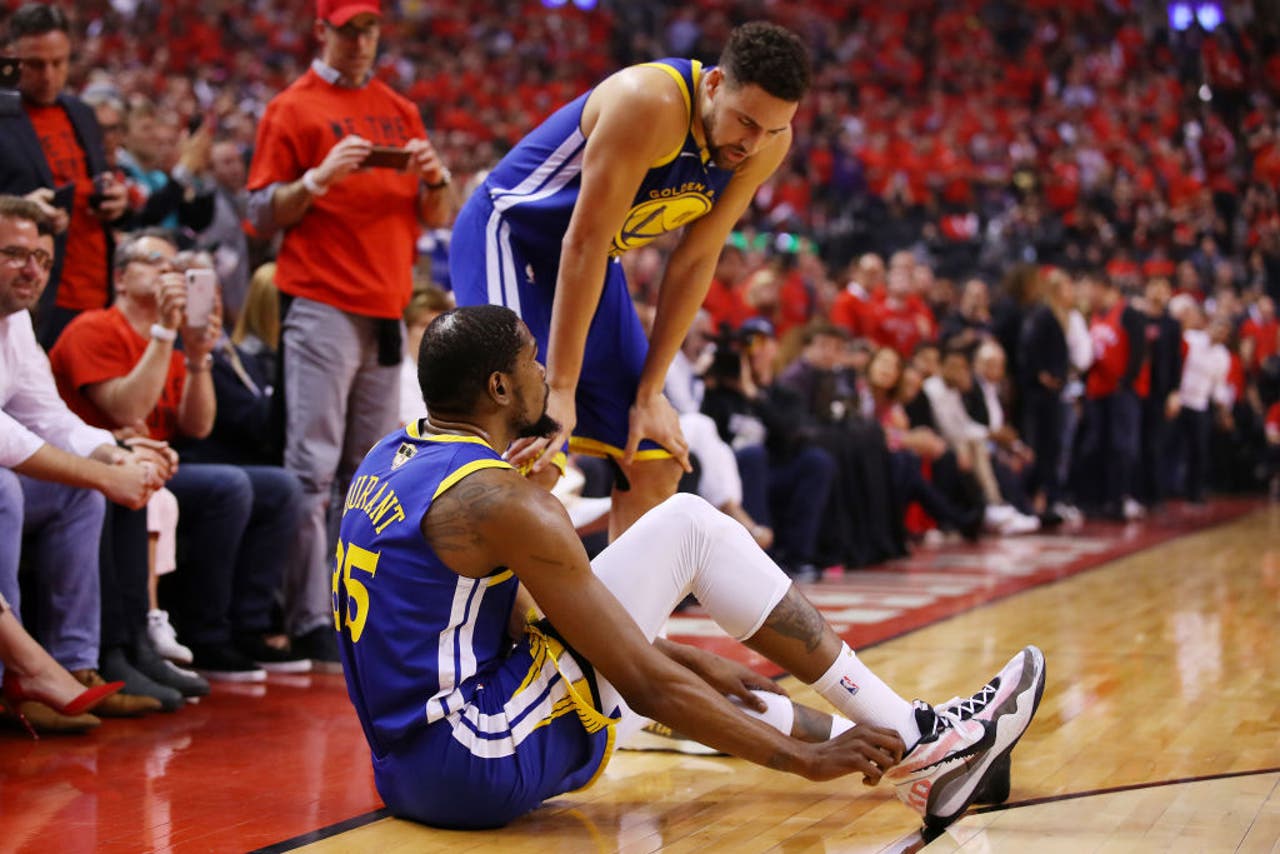 Many big-name players have sustained the injury, including Golden State Warriors guard Klay Thompson in November and Brooklyn Nets forward Kevin Durant in June 2019. Kobe Bryant, the late Los Angeles Lakers legend, also tore his Achilles in April 2013 and returned in December of that year.

There's a fraternity in the league among players who have suffered the injury.

When Lakers guard Wesley Matthews sustained a torn left Achilles in March 2015 while playing for the Dallas Mavericks, he was shocked when Bryant called him.

He recently choked back tears while recalling how much that meant to him.

"I’m pulling into my driveway, and I remember I get a call," Matthews said in November. "I have no idea what this number is, and it’s Kobe. He was just sharing his wisdom about it, and it really helped motivate me because he was honest, and he said it’s hard. He said it’s going to be hard. At the time, that’s not what you want to hear, but it’s what I needed to hear because I didn’t want anything sugarcoated."

Similarly, San Antonio Spurs forward Rudy Gay, who sustained a torn left Achilles in January 2017 when he was with Sacramento, has reached out to players who suffered the injury after him, including Cousins, Nwaba and Wall.

"I just honestly want people to do well and have control of their careers," Gay recently told reporters. "The injury has been an injury that people have kind of written you off and told you that you can't come back or it's career-ending. But if I can do it, they can do it."

For Wall, who is working his way back from a torn left Achilles sustained in February 2019, the key to returning to the court is trying to pretend the injury never happened.

He said players who favor injuries or try to overcompensate for them do themselves a great disservice.

"You kind of can tell if someone is timid in the way they're playing or the way they're coming back," Wall said. "I just go out there with the mindset if I'm healthy and I feel like my body is right, I'm going to do what I do best, and I'm not going to think about it. I feel like the more they do think about it, it takes a little bit of time to get back to they self, or they never get back to the level they was at before."

While the vast majority of players experience sharp dips in production after returning from Achilles tears, there are notable exceptions.

Durant, for example, has been defying the odds this season.

After not playing professional basketball for 18 months following his injury during Game 5 of the 2019 NBA Finals, he's averaging 29.4 points and 7.2 rebounds so far this season with the Nets, an uptick from the 26 points and 6.4 rebounds he averaged with the 2018-19 Warriors before the injury.

"I try not to make too big of a deal out of this whole thing and realize I've been playing this game since I was 8 years old, so I've just got to revert back to what I know," Durant said.

He recently had surgery to repair the tendon, and he knows he has a grueling rehabilitation ahead of him, including having to relearn how to walk, jump and run.

But Clemons, who is 5-foot-9, is used to being an underdog.

He didn't get recruited by any high-major universities, but he went on to finish his four-year career at Campbell University in North Carolina as the third-highest scorer in Division I college basketball history.

Then, after going undrafted in 2019, he signed with the Rockets as a free agent and in December 2019 turned a two-way deal into a full contract that was to pay him $1.5 million this season non-guaranteed, with a $1.7 million team option for 2022. 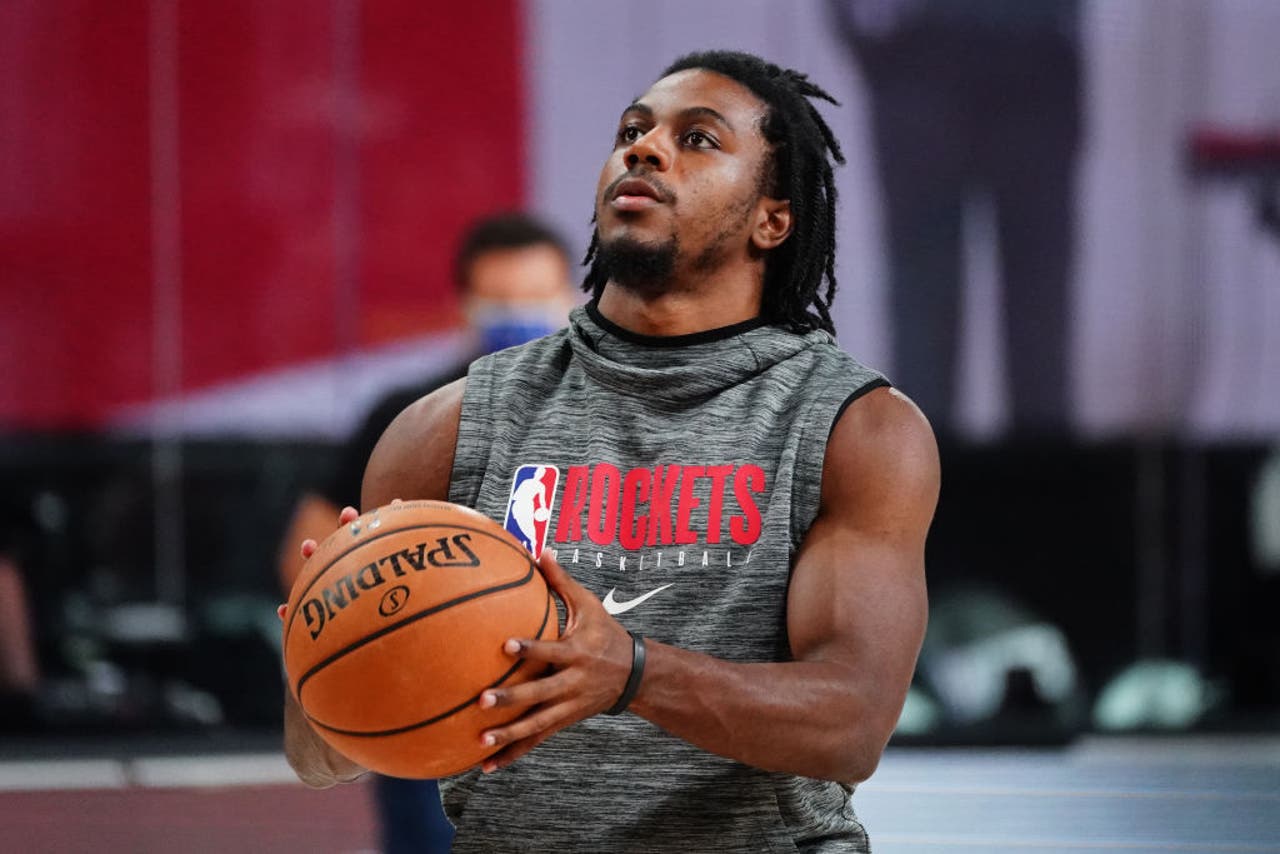 Clemons, who has a 44-inch vertical leap, is a silky shooter who is great at attacking the rim and creating opportunities off the dribble. He devoted the past summer to improving his defense and his reads off of the pick-and-roll.

He was hoping this would be his breakout season.

"Last year, I missed a lot of obvious passes, now looking at it," Clemons said. "But I thought that I was definitely growing in that aspect. I was doing things that I had never done before. It was super exciting for me. I made plays in the preseason that I would've never thought I would've saw last year."

When Clemons felt a sharp pain in his right calf Dec. 16, his heart dropped.

After all, he doesn't have the star power of guys such as Durant.

For Clemons, the concern isn't whether he'll be an MVP-caliber player when he returns from the Achilles injury. It's whether he'll still be an NBA player.

"People tell you some people haven't come back from it. They're not the same," Clemons said. "That kind of wears on the mental a little bit, just as far as it's really hard to stay in the league, you know. It's a very competitive environment, so people are scared that this will take them out of the league."

But Clemons has faith that he'll overcome this.

While waiting to get his cast off, he has devoted himself to pouring over Rockets film, trying to analyze his team's schemes and his teammates' moves.

As soon as he gets the green light, he's going to attack his rehab with the dedication and fervor that have always helped him exceed expectations.

"I'm sure I'll be back better than ever," he said.

Coming Of Age
Zion Williamson is having a historically dominant season and is turning the Pelicans into must-see viewing, Martin Rogers writes.
12 hours ago

Big Battle
Who would you rather have, Joel Embiid or Nikola Jokic? Skip Bayless and Shannon Sharpe opened up the debate on "Undisputed."
15 hours ago

Win $25,000 With NBA Super 6
The NBA features some juicy games ahead of the All-Star break. Here's how you can win some money on the marquee matchups.
19 hours ago

At His Bearded Best
In the midst of the Brooklyn experiment, one of the Nets' "Big 3" is remarkably making a case for the league's highest honor.
20 hours ago

Ball in the Family
The Ball brothers are taking the NBA by storm this season, with each reaching a new level of success in the month of February.
23 hours ago
those were the latest stories
Want to see more?
View All Stories
Fox Sports™ and © 2021 Fox Media LLC and Fox Sports Interactive Media, LLC. All rights reserved. Use of this website (including any and all parts and components) constitutes your acceptance of these Terms of Use and Updated Privacy Policy. Advertising Choices. Do Not Sell my Personal Info